Behind the music on "Vinyl": The live show triumph we've been waiting all season to see 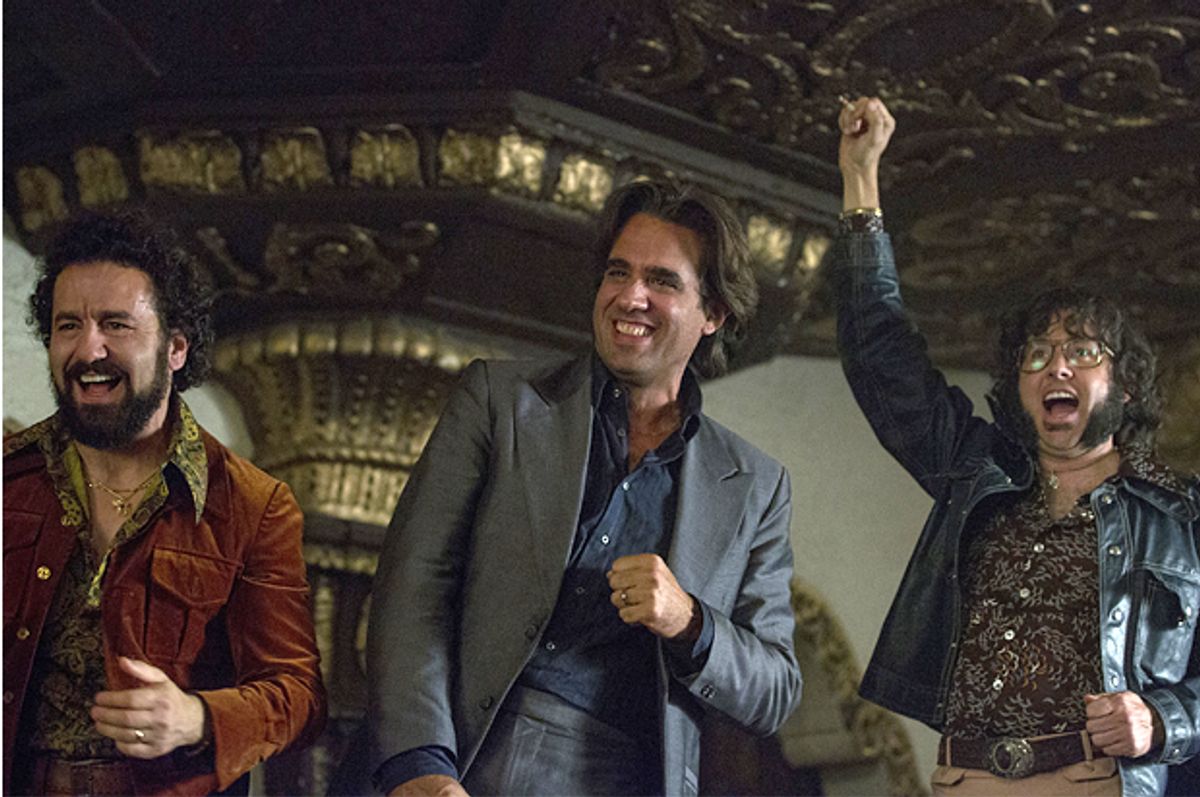 When “Vinyl” was first announced, there was a definite wave of excitement and enthusiasm from people who identify as big music fans, the kind of people who know their history and know the music on which the show is based. People thought, “Wow, Scorsese is doing a music series along with Mick Jagger! Finally, someone is going to get it right.”

This is why it’s been exponentially more disappointing when “Vinyl” not only did not rise to that expectation, but failed miserably in the same kinds of ways shows or movies about rock and roll generally fail: they either don’t bother to fact check or they don’t care about getting things right; they don’t understand or denigrate the concept of fandom; they are so far removed from the subject they’re covering that there’s zero emotional resonance.

In last night’s episode, the first season finale, “Vinyl” definitely came close to being the show we wanted it to be with the fictional band The Nasty Bits opening for the New York Dolls at the Palladium. Legendary music venues absolutely have an aura or a vibe about them when you walk in the door, whether it’s a tiny dive like CBGB’s, a theater like the Palladium, or even an arena like Madison Square Garden. You walk in and can feel that this is a place where magic has happened and where magic can still happen. The years of amazing music that preceded any given night’s show are embedded in the walls, and on the right night with the right band at the right moment, it’s like you can see it all sparkle in the spotlights. There’s a sense of anticipation and excitement and elation that is a big part why we go see live music.

In the finale, “Vinyl” actually succeeds in creating that feeling for a few minutes when the Nasty Bits walk onstage at the Palladium, including the tension before the band plays its first note. And even more importantly, the scene nails that wave of communication between the band and the audience when the Bits starting playing in front of the loud and hostile crowd, and begin to win them over. During one shot from the back of the stage of the Bits silhouetted by the balcony follow spots, I would have sworn on a stack of Bibles that we were back at the actual, real, honest-to-goodness Palladium. It was 10 or 20 seconds of magic — the crowd cheering, the band realizing that they were winning the crowd over, that they could do this, that they were doing this.

That moment where the story and the action and the actors click together and work is the reason people watch a show like this. The hostile reaction from the audience might seem exaggerated or over the top if you’ve never seen a concert in New York City, but audiences acted like that, and can still act like that. The scene of the band onstage was a thing of beauty, and its magic is something that “Vinyl” has mostly failed miserably to capture this season. But the scene was so well executed that it utterly halts me from deconstructing the rest of it: that there were no box seats in the orchestra at the old Palladium, that the sides of the theater didn’t exactly look like that, that Johnny Thunders’ hair is too flat and David Johansen’s outfit is too boring--all the action prior to the band walking onstage didn’t matter, because the show finally brought me into the scene and made me believe.

But there’s a lot of show before we get to this moment, and despite the triumph of the scene, it was not the moment they chose to close the season with, for some unfathomable reason.

The scenes with Clark (Jack Quaid) and Jorge (Christian Navarro) working the Indigo record to DJ’s all over the city were great, because for once we didn’t get 20 minutes of stilted dialogue first. They just showed the two in action, in club after club, DJ booth after DJ booth. And when Clark had his moment of glory with the American Century management team, explaining that he didn’t send the letter canceling Indigo’s contract after all, I actually rooted for his comeback at the label. (Clearly this is going to be a storyline next season.)

The Nasty Bits are rehearsing for the show at the Palladium; I do wonder sometimes if James Jagger actually sings with an affected British accent when he’s not playing Kip Stevens, because he might have an interesting voice I’d enjoy hearing. The band arguing over a girl is believable, but I don’t find Kip OD’ing to be believable because I didn’t find his heroin usage to be believable, because the show never explained enough about his character or his emotions to make it believable. (Also, there is no goddamned way that Jamie would have not gone down there and found Kip sooner. She is entirely too tenacious, and I’m glad that Richie didn’t fire her and told her to go find another band.)

The scene where Andrea (Annie Parise) and Richie (Bobby Cannavale) are going through names for the guest list was another honor roll of New York City rock and roll media (except for Lester Bangs, who was at CREEM out in Detroit.) I was glad to hear Doc Rock, aka Lenny Kaye, get a shout-out here, along with “the new girl...she does weekends”: DJ Carol Miller, who’s still on the radio today at age 62. But the scene was rushed; there’s no explanation of who American Century is inviting to see the Nasty Bits open for the Dolls, or why these particular people are important. It’s a recitation with no context that’s steamrolled into the Mafia storyline, which--Scorsese aside—shouldn’t be the point of the show.

Speaking of steamrolling: in episode 9, I thought there was something familiar looking about the bartender and the bar in which Richie meets with the FBI, but did not think that “Vinyl” would be so completely lacking in subtlety to make that spot Hilly’s On The Bowery, the bar owned by Hilly Krystal that later became CBGB’s. Of course you know that now because the exposition in the scene was about as subtle as a flying mallet. Nobody is going to buy that Richie Finestra just happened to be in a random Bowery dive he would have no other reason to be at the very moment its owner was working on the new name of the bar. It was awkward and hamfisted and left me thinking “Really??!” instead of believing (like the press release states) that “Richie is privy to the birth of a legendary music venue.” And for the record, while the name change to CBGB did take place at the end of 1973, Hilly’s On The Bowery already had live music (mostly jazz) in 1973.

And then, for the last scene of the episode — the scene that’s supposed to stay with us until the next season — there’s a party for the Nasty Bits. It makes no sense that Andrea would allow the party to happen at the label after her previous tirade about how the label’s location in the Brill Building makes it seem out of touch, and it makes even less sense that with the label’s financial issues, that they’d trash not just the physical plant but also rip up paperwork. And for the destruction to be led by Julie (Max Casella), who’s the poster boy for the “I really don’t get these crazy kids and their music” sentiment--while the MC5’s “Kick Out The Jams” (a song from 1968, by the way) plays in the background--is even less convincing, and more cringe-inducing.

But the worst part had to be Richie’s speech: “Every generation is full of lost, fucked up kids who need to hear that they’re not alone. They hear it through the records we make…These kids need a voice, and Alibi is it!” I’m glad this speech happens in the last episode, because it would have made me turn off the series in disgust and never come back to it if it had taken place a couple of episodes earlier, and it’s just as unconvincing now. Don’t get me wrong: this is a fine and true sentiment, but they’d already proved that point at the beginning of the show with the Nasty Bits’ debut at the Palladium, which is the scene with which they should have closed the episode and the season. Because that scene was, at least, close to the actual spirit of rock and roll for a few seconds; it felt real and genuine, which the manufactured melee at American Century does not. This is the problem with “Vinyl” in a nutshell, and it’s hard to believe that it will get better, though now that showrunner Terence Winter has been replaced with Scott Z. Burns, some shake-ups seem inevitable next season. See you on the flip side.