Hollywood's gender-swapping problem: It looks like progress for actresses — but women of color are still mostly shut out 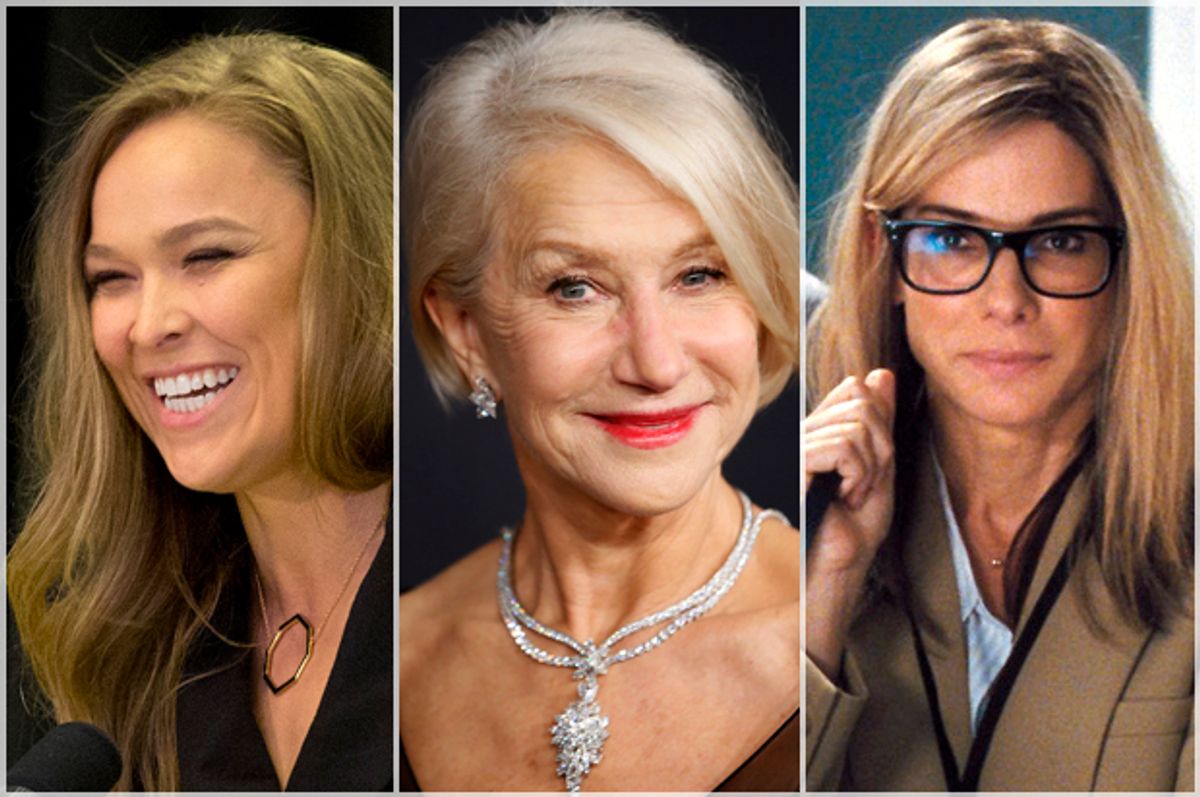 Helen Mirren is the latest A-lister to benefit from the recent genderswap trend in Hollywood. In a recent interview with the BBC, the Oscar-winner explained that her newest role, playing a colonel in charge of a drone strike operation in Gavin Hood’s “Eye in the Sky,” was originally written for a man. “As opposed to saying ‘well, that’s men, that’s what men do in war’ … I think Gavin very astutely understood and realised putting a woman [into the role] just changed the discussion,” Mirren said. The 70-year-old further urged other actresses to go out for male parts: “You look at a scene, and it’s going to be all men around a table, and you think at least half of those could have been women.”

Gender-swapping has been long been touted as opening the doors for women’s representation in cinema. The role of Hildy Johnson, played by Rosalind Russell in Billy Wilder’s “His Girl Friday,” was originated by Pat O’Brien in “The Front Page,” the film on which the screwball classic was based. In recent years, films as diverse as “Our Brand Is Crisis,” “Salt,” “Secret in the Eyes,” and the all-female “Ghostbusters” reboot have all cast women in roles originally conceived for the opposite sex. Other films that have gotten on board the gender-swap train include “Dr. Strange” and the remake of “Road House,” with Ronda Rousey in the Patrick Swayze role.

But how wide is this door actually opening? When director David Gordon Green wanted to fill the role of a thick-skinned political consultant in Bolivia, he went with Sandra Bullock. “Salt,” a 2010 action film directed by Australian Phillip Noyce, starred Angelina Jolie. In remaking “The Secret in their Eyes,” the Argentine Oscar-winner about a detective determined to close an unsolved murder that occurred decades earlier, director Billy Ray enlisted Julia Roberts. Marvel’s “Doctor Strange” franchise starter cast noted chameleon and space alien Tilda Swinton as the Ancient One.

Spot the pattern yet? In every single one of these cases, the role went to a white actress. Missing are names like Salma Hayek, Lucy Liu, Viola Davis, Kerry Washington, Penelope Cruz, Taraji P. Henson, or the myriad actresses of color who are still waiting to have roles rewritten and reimagined with them in the part. In many cases, these women are still waiting for Hollywood to imagine them in any part at all. Kerry Washington is TV royalty, currently appearing in HBO’s Anita Hill biopic “Confirmation” while starring in Shonda Rhimes’ megahit, “Scandal,” but on the big screen, she remains a near nonentity — it's been four years since her last high-profile vehicle, "Django Unchained." Where’s her gender-swapped action movie?

The science-fiction classic “Alien” was conceived with a disclaimer: Although its screenwriter, Dan O’Bannon, wrote all the roles as male by default, a note in O’Bannon’s original script mandated that this was open to interpretation. “The crew is unisex and all parts are interchangeable for men or women,” the screenplay stated. Thus, Sigourney Weaver would be cast as Ripley, despite the fact that the action heroine was conceived as a hero. In many ways, that switcheroo is part of what makes her such a great character: It adds a dynamic tension to what otherwise would be a generically male-dominated space. In James Cameron’s “Aliens” sequel, motherhood becomes a defining theme, a novel and striking choice for an action film.

Others have noted that playing with gender and even sexuality is of great benefit to writers and producers, aside from the obvious diversity component. When penning the pilot to “Shades of Blue,” the show’s executive producer, Adi Hasak, decided to make Lt. Matt Wozniak, played by Ray Liotta, bisexual. “[I] was writing a scene between him and Donnie Pomp, the two heavies, and it was, to be honest, a really fucking boring scene between two macho guys explaining things to each other,” he told The Wrap. “The characters had no vulnerability, especially the character of Wozniak. So he just leaned forward, and I had the two men share a kiss.”

These choices add dimension and depth to the characterization, allowing actors to do more than play stock types. In a 2013 sitdown with Net-a-Porter, Lucy Liu explained that she’s too often cast as “Dragon Lady” types. “I wish people wouldn't just see me as the Asian girl who beats everyone up, or the Asian girl with no emotion,” she argued. “People see Julia Roberts or Sandra Bullock in a romantic comedy, but not me.” On CBS’s “Elementary,” Lucy Liu gets the rare chance to be the first Asian-American actress to play Dr. Watson from the classic series of detective novels.

So why are these opportunities so few and far between? On “Gotham,” Latina actress Michelle Veintimilla plays Firefly, who is a white man in the original Batman comic books. Otherwise, it’s actively difficult to think of a case of gender-swapping in which the role has gone to a woman of color. Charlize Theron, for instance, was recently cast in “The Gray Man,” a part originally intended for Brad Pitt. Theron plays a contract killer unaware that she has children, and as some have pointed out, that means the script will obviously have to be re-written. (If she gave birth to them, how is that possible?) Would producers be so accommodating for Angela Bassett or Jennifer Hudson?

Which brings us to the controversy around “Nina,” the Nina Simone biopic that has faced consistent backlash over casting Afro-Latina actress Zoe Saldana in what critics are calling blackface in order to portray a singer with much darker skin. When it comes to the representation of black women in cinema, gender and race aren’t swapped to accommodate them — it’s their specificity that is erased to accommodate the studio system, one driven by both the bottom line and insidious colorism. It’s still considered more “marketable” to cast someone who looks like Saldana, who looks like what producers “want,” than an actress who actually looks the part.

In an interview with InStyle last year, Saldana argued that “an artist is colorless [and] genderless,” but that misses the point. As Britt Julious argued in Pitchfork, Nina Simone’s hue is “as important as the sound of her voice.” Julious wrote, “History thus far has not been kind to women gifted with melanin, so the ones in the public eye who cut the deepest—most often the creators, so full of voice—ripple deep within us and shape the ways in which we navigate the world.” When black actresses can’t even get the roles that should be created and written for them, those that resonate deeply with their own experiences of navigating the world with a darker skin color, there’s little hope they’ll be given Brad Pitt’s spot in a movie anytime soon.