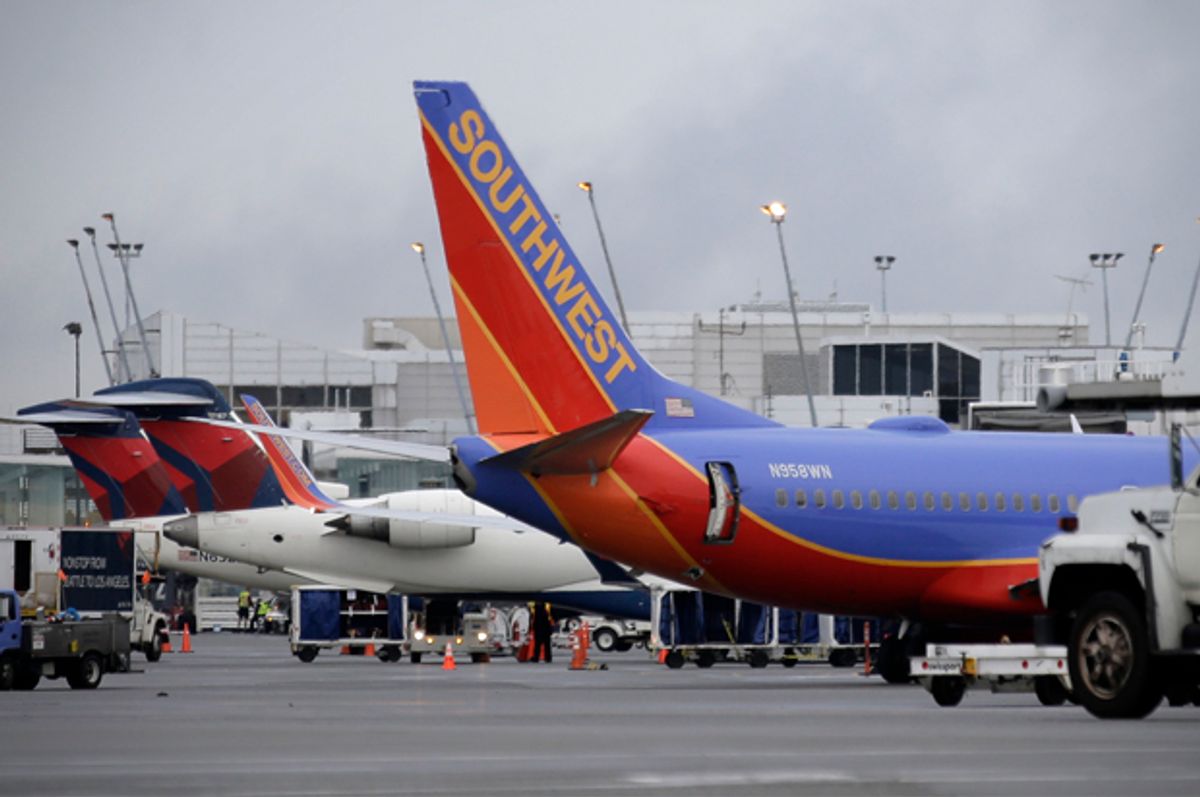 This weekend, Southwest Airlines issued the statement that it regrets whenever any passenger has a "less than positive experience… onboard our aircraft." Yeah, I guess you could say that getting kicked off the plane and being humiliated and detained — apparently because you conducted a phone call to your uncle in Arabic and freaked out a fellow passenger — would constitute a less than positive experience.

Khairuldeen Makhzoomi is a 26 year-old political science student at the University of California, Berkeley. The New York Times reports that he came to the U.S. six years ago as an Iraqi refugee. Makhzoomi also says that his father, Khalid Makhzoomi, was a diplomat who was imprisoned by Saddam Hussein and later killed by his forces.

On April 6, he was en route from Los Angeles to Oakland when, while waiting for the plane to take off, he called his uncle in Baghdad to tell him about a dinner event he'd attended the day before with UN Secretary-General Ban Ki-moon. He told his uncle about he'd even been able to ask him a question about the Islamic State. As Makhzoomi told CNN this weekend, "I just called him and talked to him about it and everything, and he told me [to] call him when I get to Oakland. And I said, 'insha'Allah insha'Allah [God willing], I will call you when I arrive.'" He added, "During the conversation a lady was staring at me." That turned out to be an ominous portent.

The woman reportedly quickly got off the plane, and then, as Makhzoomi put it, "One guy came with police officers within two minutes -- I can't believe how fast they were -- and told me to get off the plane." He says he was searched in front of "a crowd" of onlookers and then taken to a private room and questioned for hours. Makhzoomi recalled that "the guy who came and pulled me from the plane, he took me to the jet bridge. I believe he worked with Southwest and I must say he was aggressive in the way he treated me. He was not very nice. He tried to speak to me in Arabic, but I couldn't understand his Arabic, so I asked him to speak to me in English. I felt oppressed. I was afraid. He said, 'You seem that you were having a serious conversation on the phone. Who were you talking to?'"

When he told him, and even showed him a video of the event, Makhzoomi said the man replied, "Why are you talking in Arabic? You know the environment is very dangerous.'" He claims an agent told him, "You need to be very honest with us with what you said about the martyrs. Tell us everything you know about the martyrs," and added, "Southwest will not fly you back." Eventually, he was issued a refund and flew home on a different airline.

In a statement, Southwest cautiously stood by its choices, telling CNN that "Prior to the departure of Flight 4620, our crew made the decision to investigate a report of potentially threatening comments overheard onboard our aircraft. A group of our employees including the flight crew made the decision to review the situation. We understand local law enforcement also spoke with that passenger as the aircraft departed the gate. To respect the privacy of those involved, we will not publicly share any further specifics of the event. We prefer to communicate directly with our customers to address concerns and feedback regarding their travel experience."

Makhzoomi says that he has no plans to pursue legal action, but is disappointed that hasn't received any apology. He says instead that he was spoken to "like I was an animal."

When he returned home, Makhzoomi reached out to the Council on American-Islamic Relations. Zahra Billoo, an executive director for the Council, says there have been "at least six" similar incidents this year alone. "We are concerned that Muslims are facing more and more scrutiny and baseless harassment when they are attempting to travel." Less than a month ago, Eaman-Amy Saad Shebley, a Chicago area Muslim mother of three, went public with her claim that United Airlines had booted her entire family from a recent flight to Washington D.C. over what they claimed were "safety issues." And only last week, CAIR shared the story of a Muslim woman who was removed by police from another Southwest flight after she asked a fellow passenger if she could switch seats so she could have a window view.

For its part, Southwest rather contradictorily says that "We wouldn't remove a passenger from a flight without a collaborative decision rooted in established procedures," but that "Southwest neither condones nor tolerates discrimination of any kind. Our company could not survive if we believed otherwise." Makhzoomi meanwhile sadly observes that "My family and I have been through a lot and this is just another one of the experiences I have had." But he insists, "We as a people, Iraqi, American, Iranian, we share one thing in common, and that is our dignity. If someone tries to take that away from us, we should fight but not with aggression, with knowledge and education."