The Clintons style of politics is losing sway, while Bernie represents a return to New Deal principles. It's time 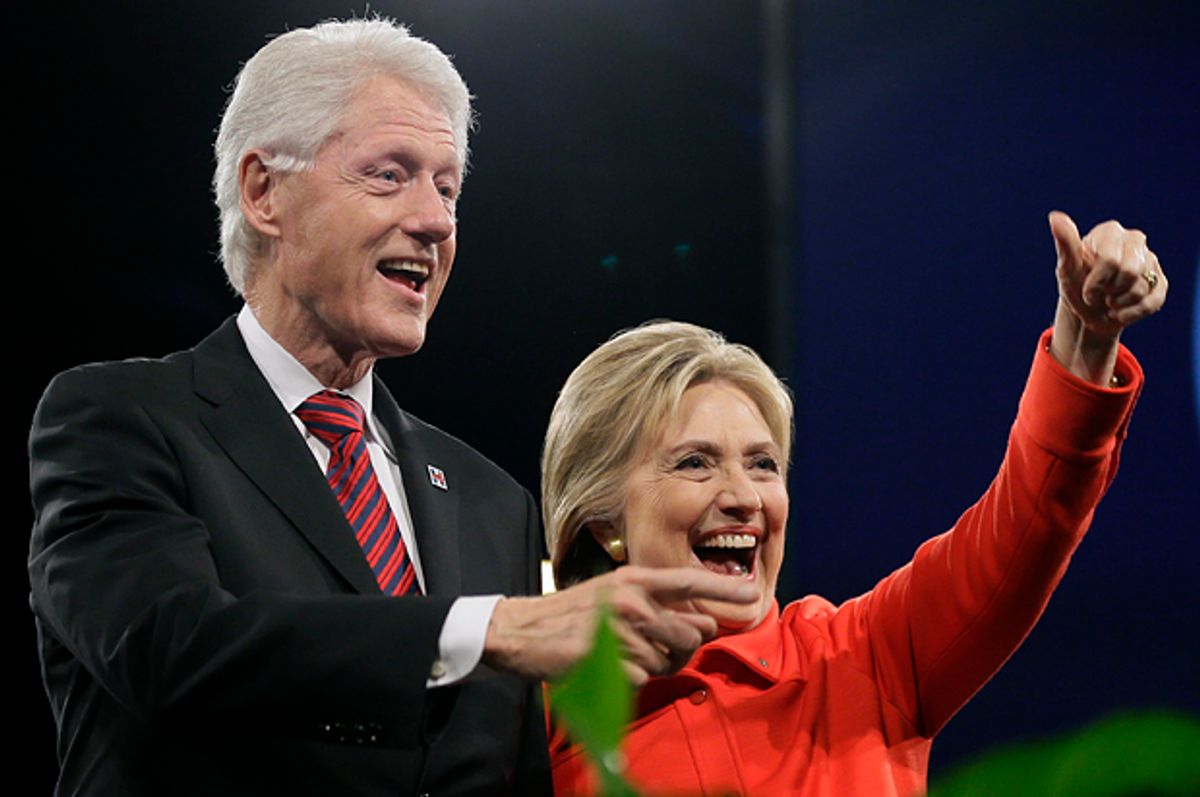 Democratic National Committee Chair Debbie Wasserman Schultz has been very busy over the past several months trying to convince people that the Democratic primary process is in no way tilted in favor of frontrunner Hillary Clinton. She has appeared on talk shows to debate about super-delegates and why they are necessary (to ensure that “party leaders and elected officials don't have to be in a position where they are running against grass-roots activists”), and has denied any kind of real tension within the Democratic Party. Indeed, whenever confronted about her handling of the primaries — or the current state of the party — Wasserman Schultz tends to dodge the question and pivot to just how crazy and dysfunctional the Republicans are, as if to say: “Yeah, we’re pretty terrible, but look at those clowns.”

Once again, the evil Republicans are used to divert from the reality that Democrats are going through some serious problems of their own, like the fact that their likely nominee is one of the most distrusted politicians in the country. As Democratic strategist Brad Bannon told The Hill a few days ago:

“The No. 1 reason that [Clinton’s] favorability is so bad is that you have large numbers of Americans who say they don’t trust her... Voters see her as the ultimate politician, who will do or say anything to get elected.”

When the general election comes around in a few months, and Clinton is facing Donald Trump or any other Republican candidate, one can easily predict what kind of uninspiring platform she will be running on. The Clinton campaign provided a small appetizer in a short ad earlier this year, in which a foreboding narrator warns that “one of these Republicans could actually be president,” over clips of typical GOP lunacy. “They’re backward, even dangerous,” he continues, “So ask yourself, who’s the one candidate who can stop them?”

Answer: Hillary Clinton can stop them!

It’s the kind of hyper-partisan campaign one has come to expect at this point, running on the lesser of two evils principle. And it’s not wrong. Republicans are unquestionably dangerous and extreme, and if Trump or (God help us) Ted Cruz manages to get elected president, America and the world will be in store for a great deal of pain. One has to be slightly misanthropic to support a Republican over Clinton in hopes of triggering a more radical uprising.

But more and more Americans are tired of voting for a politician simply because he or she is less ghastly than the other party’s candidate. And the rise of Senator Bernie Sanders has intensified this weariness. Although the Clinton campaign has tried to downplay the differences between Clinton and Sanders — making it more about practicality than principles — when it comes down to it, Sanders and Clinton are simply different breeds of politician. Sanders is a throwback to New Deal liberalism, when Democrats promoted economic egalitarian principles and sought to curb the power of monied interests and limit the inequities of capitalism. Clinton, on the other hand, represents the New Democrat liberalism that emerged in the 1980s and 1990s, when various Democratic leaders abandoned the working and middle class and cozied up with what Thomas Frank calls the “professional class” in his new book, "Listen, Liberal." Frank explains the economic philosophy of this professional (i.e. liberal) class:

“To the liberal class, every big economic problem is really an education problem, a failure by the losers to learn the right skills and get the credentials everyone knows you’ll need in the society of the future. Take inequality. The real problem, many liberals believe, is that not enough poor people get a chance to go to college and join the professional-managerial elite.”

So, it is not so much the capitalist system that promotes inequality, but the fact that not everyone gets the chance to live up to their “God-given potential,” as Clinton likes to put it. For a professional who has worked hard to get to his or her current position through many years of education, this perception is understandable. Of course, it’s completely wrong — as the productivity-pay gap, which has steadily increased since the 1980s, reveals. Frank accurately sums up the real source of today’s sweeping inequality:

Liberal elitism is real, and many liberal elites are completely oblivious to the struggles of the bottom 90 percent. Sanders has reminded America of the kind of class politics that liberalism once embraced, and how modern liberalism lost its way. Consider each candidates relationship with the telecommunications giant Verizon. On Wednesday, Sanders stood on the picket line with Verizon workers in New York, and even drew fire from CEO Lowell McAdams, who received nearly $20 million in compensation for 2014.

On the other hand, Clinton, as Salon’s Ben Norton reported, has received tens of thousands from Verizon executives and lobbyists, and was paid $225,000 by Verizon for a 2013 speech. The corporation also has ties to the Clinton Foundation, and has donated between $100,000 and $250,000.

The 2016 primaries have revealed a major strife within the Democratic party. If Clinton is the nominee — which is still the most likely outcome — she will probably win the general election, because the horror of a Donald Trump or Ted Cruz presidency would propel liberals and Independents to come out and vote. But how long can the Democratic party run as the “lesser of two evils” party? How long can liberal elites use Republicans to divert attention from their own reactionary beliefs?

According to a report from Pew Research Center, the least financially secure Americans largely preferred Democrats in 2014, but a majority of them did not vote. There is an understandable political apathy among lower class Americans — not to mention voter suppression, which tends to hurt poor people and minorities. After all, both parties supported corporatist trade deals that eliminated working class jobs, both parties supported Wall Street bailouts, both parties are largely dependent on big money donors — it goes on and on.

When Sanders announced his candidacy last year, he barely registered in the national polls, and Clinton had a enormous 60 percent support. Today, Clinton and Sanders are just about tied in national polls (according to HuffPost Pollster, 47.9 to 44.1 percent). Sanders’ egalitarian vision has energized many Americans who had lost faith in the political process — and while Clinton’s hold on delegates may be insurmountable, her hold on the Democratic Party is not.