Early retirement For Rush Limbaugh? His show is in peril, but the right-wing world he helped build will sadly live on

Limbaugh's radio show is on the rocks and his station is bankrupt, but the right will survive when he's gone 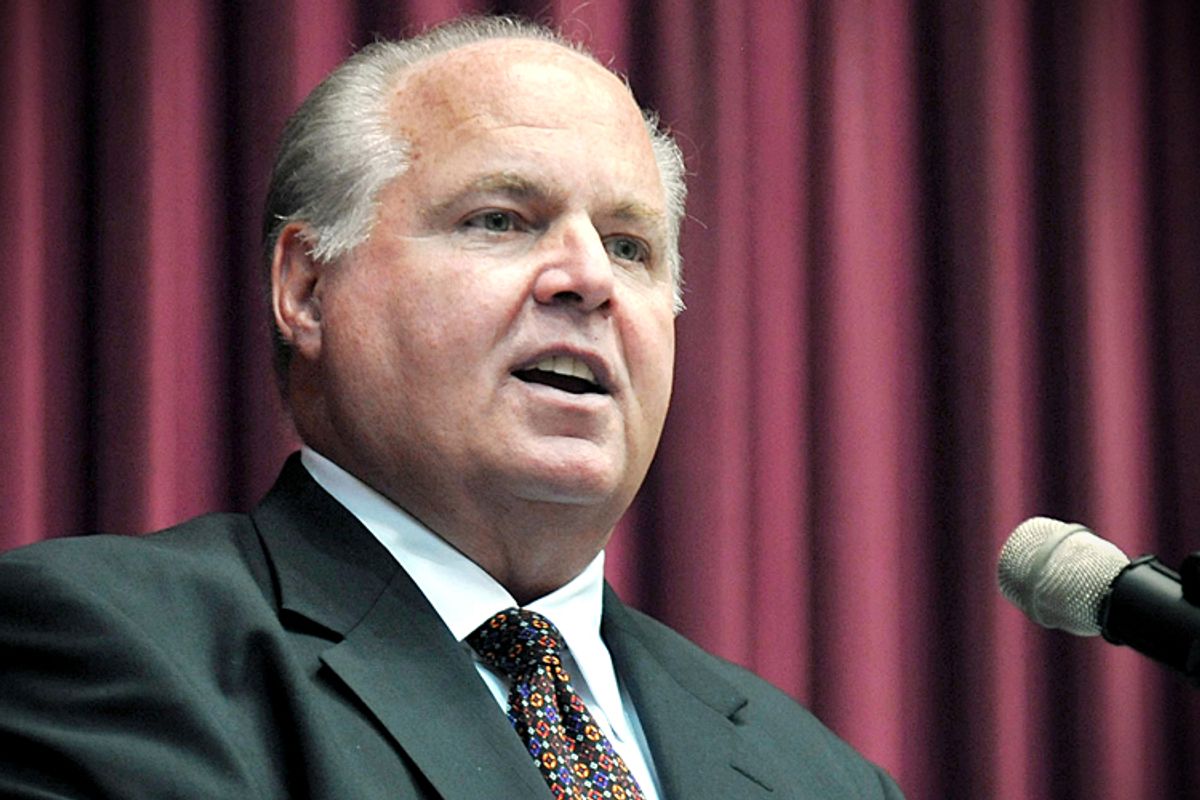 Is the clock ticking for Rush Limbaugh's infamous radio show? The man who has done more than anyone besides possibly Roger Ailes in defining the modern day conservative movement is facing a serious contract situation this year. His contract with iHeartRadio (formerly Clear Channel) is about to be up, and frankly, there are good reasons for the behemoth radio corporation to drop him: His ratings are down, his audience is aging, he's lost advertisers and frankly, there's a lot of competitors that are equally good at spewing right-wing bile at a much cheaper price tag.

Eight years ago, Limbaugh was flying high. Not only were the Democratic prospects of winning the presidency looking good after eight years of George W. Bush, but neither of the viable candidates for the nomination was a white man. Bad for the Republicans, but in theory, good for Limbaugh, whose show is all about conservative outrage. This is a man who rose to prominence in the '90s by having daily multi-hour rants about the supposed evils of then-president Bill Clinton. The prospect of another Democrat in office to hate on, especially one who isn't a white man, must have had him salivating.

Perhaps this is why iHeartRadio, Eric Boehlert of Media Matters reminds us, offered Limbaugh a staggering $400 million contract in the summer of '08, complete with a $100 million signing bonus.But the past years have not actually been that great for either Limbaugh or iHeartRadio.

"The talker is facing ratings hurdles, aging demographics, and an advertising community that increasingly views him as toxic," Boehlert writes, "thanks in part to his days-long sexist meltdown over Sandra Fluke in 2012."

In addition, iHeartRadio's own finances are in serious trouble, "teetering on bankruptcy," according to Boehlert. Limbaugh is probably facing a major pay cut, or, worse, being cancelled altogether.

Limbaugh's troubles mirror the larger problems of the Republican party. The Republicans have spent the past few decades fetishizing the idea of the "real" conservative, driving the party to the right and making it a competition to see who can be the most conservative right wing ideologue of them all. Now that hyper-conservative voting base has decided the Republican party itself is not pure or conservative enough. The result is a flocking to Donald Trump, who can portray himself as a Tea Party-remisicient outsider, a man who isn't afraid to say or do the other things that the supposed quislings in the party are too afraid to say or do.

Similarly, Limbaugh might be a victim of his own success. When he started getting really popular in the '90s, right-wing talk radio wasn't the monster it is now. There was no Fox News. The internet was brand new and there wasn't a bunch of right wing blogs and message boards. There wasn't even a Drudge Report.

But Limbaugh's popularity helped usher in this explosion of right wing media. His high ratings led to radio stations starting up hundreds of imitators, all vying to be the most outrageous with their political incorrectness. His aesthetics and obsessions helped shape the right wing internet as we know it. It's hard to imagine a world with Fox News, Breitbart, and the Free Republic if Limbaugh hadn't shown and helped create the enormous appetite for right wing paranoia and bombast.

But now it seems there might be market glut. As Mark Morford of SFGate writes:

But the fact remains: Limbaugh’s superpower days are largely over. The younger generation of hardcore conservative trolls – and they are legion, just ask Trump – they’re finding new outlets, new ways to express their bile, often online (hi, Reddit). After all, who needs old-timer, old-man talk radio when you have the Internet? Who needs Rush when every undereducated right-wing white male can pretend he’s Rush, in chat rooms, Twitter, Facebook and commenting forums?

Of course, as I like to remind my fellow car-free New Yorkers, there will always be a market for radio as long as people are still driving cars, or, more importantly, sitting in traffic. This is why Limbaugh was such a powerhouse in the first place, because he harnessed an outlet that many people, in the TV-obsessed 90s, didn't even really remember was still an influential medium.

There, however, Limbaugh is still facing a much different environment than he used to have. Every two-bit conservative blowhard out there now has his own radio show. Finding someone spewing fact-free right wing propaganda isn't hard to do. On the contrary, in some parts of the country, you'd be hard-pressed to find an AM station that plays anything else. Limbaugh came up in a world where he was the only show in town. Now right wing radio is like Baskin Robbins. Why order vanilla when there are 30 other flavors to choose from?

Which is why, even though it's fun to imagine Limbaugh being forced into an early retirement, it's also not some great liberal victory. The truth is that Limbaugh has built a powerful legacy that will endure long after he's retired or even dead. He helped shape and mainstream modern conservative propaganda, selling it not just as a legitimate form of entertainment, but, even more disturbingly, a replacement for the actual news for millions of Americans. Between talk radio and Fox News, huge numbers of Americans take in hours upon hours of political programming a day without actually engaging with the facts. The result is a world where Donald Trump can be the frontrunner for a major political party and lies about everything from climate change to abortion are a normalized part of everyday discourse.