The heartbreak of “Better Call Saul”: Season finale hints the series will be even more devastating than “Breaking Bad”

Unlike Walter White, we know Jimmy McGill is a good man, and that makes his transformation painful to watch 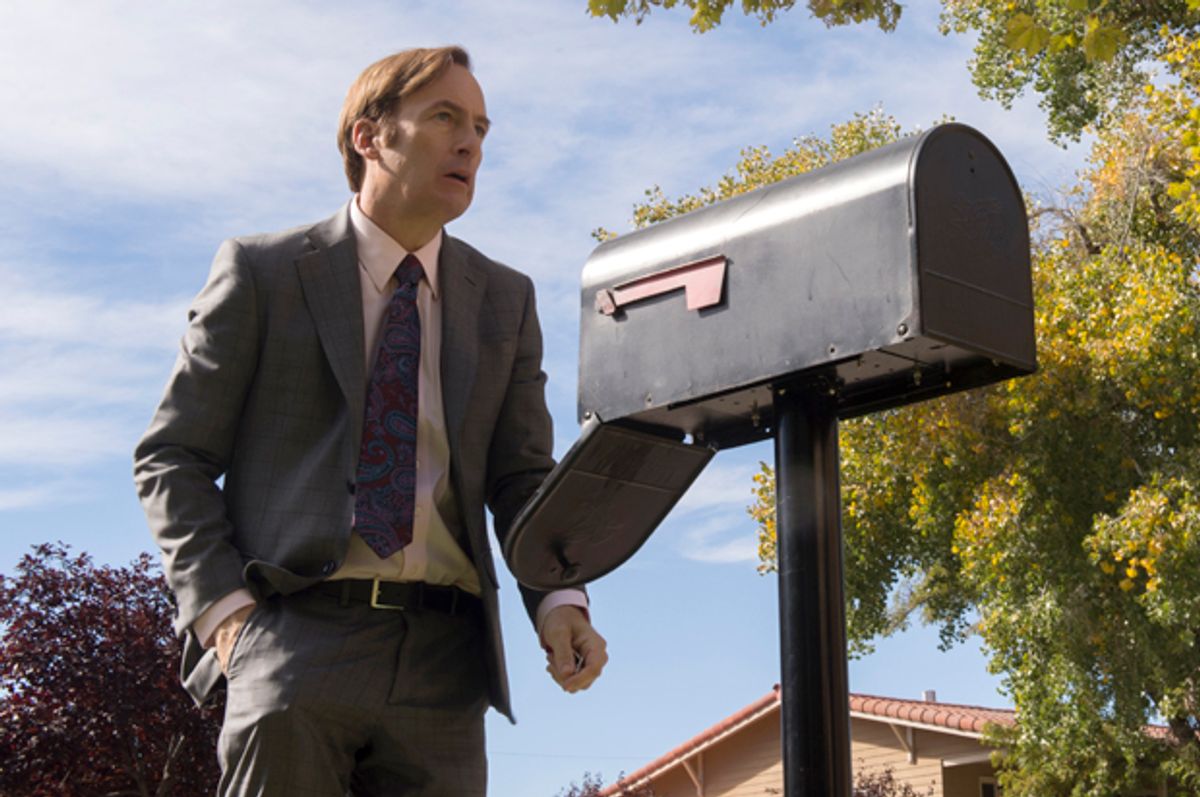 Last night’s finale of “Better Call Saul,” “Klick,” ended on one of the show’s most heart-wrenching plot twists yet. It’s not a cliffhanger, exactly, though it is hard to not feel extremely curious about what happens next. But rather than leaving the audience in suspense—as co-creators Vince Gilligan and Peter Gould, who executive produced “Breaking Bad,” are wont to do—“Klick” ends with an emotional thud that feels like a bomb has dropped. The final shot reveals that Chuck (Michael McKean) has tricked his brother Jimmy (Bob Odenkirk) into confessing, on tape, a legal indiscretion that happens to also be a felony. Given that we know Jimmy becomes a man named Saul Goodman by the time the events of “Breaking Bad” start up, this blow radiates portent. This is probably the end of Jimmy McGill, attorney-at-law, and with it goes his whole life. Most saliently, outside from losing his legal license, he’ll probably lose his girlfriend and business partner Kim Wexler (Rhea Seehorn), the woman who he forged those papers for.

“Better Call Saul”’s focus on the fraught relationship between Chuck and Jimmy made the first season a bit difficult to settle into. Chuck wasn’t in “Breaking Bad,” for one thing; he’s a really confusing character, for another. He is sensitive to electromagnetism—a syndrome that could be entirely psychosomatic—and wraps himself in a metallic space blanket when the signal is fraying his nerves most. He’s humored enough by the people around him—including and especially Jimmy—that it seems plausible that he might just be eccentric, or maybe that everyone in New Mexico is familiar with electrosensitivity and its symptoms.

But this episode begins with Chuck needing to go to the hospital. Last week’s episode “Nailed” had scenes from Chuck’s point of view that were filled with the sounds of electric current buzzing through fluorescent lights or walkthrough metal detectors. In “Klick,” his torment is intensified, as he is injured, disoriented, and subjected to the overhead lights and beeping machines of the emergency room. The routinely prescribed CAT scan for head injuries is a special depth of hell for him.

And the way the doctors react reveal that Chuck is not just intractable and petty and unforgiving, which is most of his persona with his wayward younger brother. He’s also mentally ill, to the point that Jimmy could actually have him committed. The scene clarifies some of Jimmy’s neverending patience with Chuck, despite the fact that his older brother seems to have made it his life’s work to prevent Jimmy from getting any respect as an attorney. It also makes Chuck’s razor-sharp intellect incredibly disturbing. Jimmy’s a con-man, yes, but his heart is usually in the right place. Chuck is a broken, mean-spirited man, and his heart is nowhere to be found.

As I wrote a few weeks ago, one of the main differences between “Breaking Bad” and “Better Call Saul” is that their lead characters are completely different types of protagonists. Walter White (Bryan Cranston) wielded aggression with wounded indignation while focusing his prodigious talent on a massive criminal enterprise. Jimmy McGill is a two-bit con-man looking to make his third bit without anyone bothering him too much; ideally, he’d like to be with Kim for the rest of his life. It’s quite the contrast of heroism (or, to be exact, anti-heroism).

And as I realized last night, this contrast has interesting ramifications for the plot. With both shows, you know exactly how they’re going to end in the first episode: Walter’s going to die, and Jimmy’s going to end up as Gene, the manager of an Omaha Cinnabon. But Walter White breaks bad out of his own choices, his own twisted will; he admits as much to his wife in the last few episodes of the show. Jimmy McGill seems to be pushed to a life of living in the shadows by the machinations of his only remaining family member. Chuck now holds in his hands the key to ending Jimmy’s career, and given what we’ve seen so far, he’s bound to use it.

And it hurts so much more than anything I remember of “Breaking Bad,” because Jimmy is a nice guy. Not perfect, and not totally honest, either. But a good man. We know he won’t continue to be a good guy, not with Saul Goodman lurking around the corner. Seeing him here is seeing a certain kind of innocence right before it hits the chopping block, and Chuck’s tape of Jimmy’s confession is the chopping block. When Jimmy McGill is gone, so is this man’s fundamental sense of decency—that decency that motivates his love for Kim, his dedication to the old folks at Sandpiper, even his mendacious flattery towards his marks. Sure, he might be stealing or lying, but at least he’ll be nice about it.

As a result, “Better Call Saul”’s season two has been an incredible 10 episodes of television, delivering the emotional power of “Breaking Bad” without the anger and violence that so frequently defined that show. And his weirdly expressed sense of duty is now going to do him in; his refusal to have Chuck committed gave his older brother the freedom to take him down. Where Walter White spent several seasons honing his anger, Jimmy has spent the last two exposing his vulnerability; and now, where Walter spent “Breaking Bad” imposing his willpower on an harsh world, “Better Call Saul” asks us to watch as Jimmy’s goodness is beaten out of him by that same indifferent universe.

That is a hard journey to watch unfold with slow, crystalline perfection, but it is a testament to Gilligan and Gould’s talents that “Better Call Saul” feels impossible to stop watching. There are occasional adventures with guns and drugs in the show; the finale featured a mysterious note left on a windshield and a rifle that can hit a target from 1,000 meters away. But the real drama of “Better Call Saul” is the struggle to remain yourself, in a world that doesn’t want you to.