The mad king of New York: Why the Empire State lies at the heart of Donald Trump's sinister appeal

Trump's win tonight in the NY primary makes all the sense in the world, and not just because it's his home state 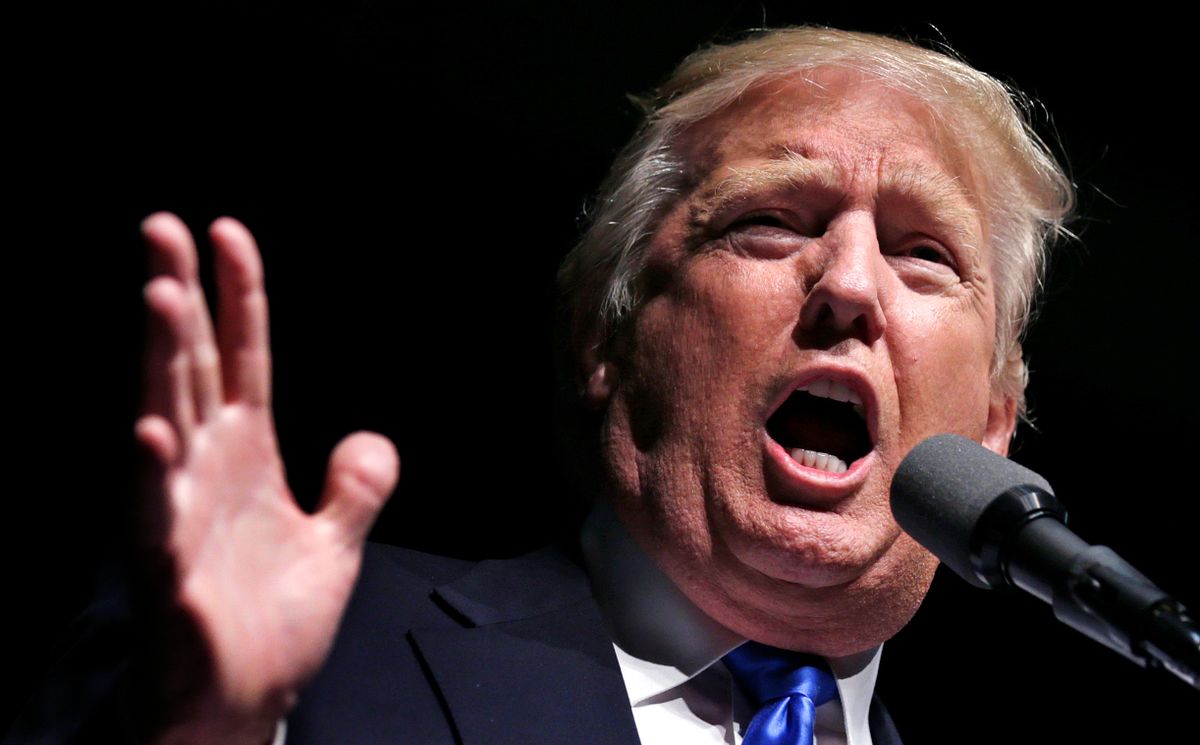 Today is likely to be the biggest day in Donald Trump's short political career. All the polls have him winning the New York primary and winning it big. He's always been a prince of the city but tonight he will be crowned the king. No matter what happens in the rest of this campaign, one suspects this will always be a high point. I can hardly wait to see what over-the-top victory pageant he cooks up for this one.

It's not surprising that Trump would win his home state, but it's still interesting to ponder just how it is that the Republican Party, which for several decades now has been assumed to be deeply tied to the macho myths of the South and the West, came to elevate a wealthy, pampered New Yorker to position of frontrunner for the presidential nomination. All these years we've assumed that such purveyors of effete, Big City values were anathema to the heartland values of Real America. Ted Cruz came right out and said it but it didn't seem to bother all those fellows with the confederate flags on their pick-ups or even the evangelical values voters. What's changed?

One of the modern conservative movement's most insightful historians, Rick Perlstein, wrote about it in this piece for the Washington Spectator. He looks at the history of New York's conservative political tradition going back to Klan marches in the 1920s and the huge pro-Hitler rallies in the late 1930s, showing that Trump's proto-fascist undercurrents aren't foreign to his home state. Perlstein delves into William F. Buckley's run for mayor, the Ed Koch years, as well as Trump's long-standing relationships with Roy Cohn, Joseph McCarthy's right hand, and with Nixon's notorious dirty trickster, Roger Stone. He describes them as "flashy, hedonistic right-wing operatives who gargle with razor blades and wear their shiny silver three-piece suits like armor." That's not something you see down in Texas.

Perlstein homes in on something important about Trump that illuminates this race and our current political era:

[W]e locate the formation of Donald Trump’s mature political vision of the world, in continuity with America’s racist and nativist heyday of the 1920s, and within the context of a cultural world much more familiar to us: New York in the 1970s, that raging cauldron of skyrocketing violent crime, subway trains slathered with graffiti, and a fiscal crisis so dire that even police were laid off in mass—then the laid off cops blocked the Brooklyn Bridge, deflating car tires, and yanking keys from car ignitions.

Think of Trump coming of age in the New York of the 1977 blackout, the search for the Son of Sam, and Howard Cosell barking out “Ladies and gentlemen, the Bronx is burning” during game two of the World Series at Yankee stadium as a helicopter hovered over a five-alarm fire at an abandoned elementary school (40 percent of buildings in the Bronx were destroyed by the end of the 1970s, mostly via arson—often torched by landlords seeking insurance windfalls).

Think of Trump learning about the ins and outs of public life in this New York, a city of a frightened white outer-borough middle-class poised between fight or flight, in which real estate was everywhere and always a battleground, when the politics of race and crime bore all the intensity of civil war.

Perlstein goes on to discuss one of the seminal movies of the period, "Death Wish" starring Charles Bronson, about a liberal New Yorker whose wife was murdered and his daughter raped by street thugs. Unable to get justice, Bronson learns to shoot (in an Old West town!) and goes out in the streets looking for muggers so he can shoot them at point blank range. According to Perlstein's book about the era, "The Invisible Bridge," the movie packed in audiences all over New York in the summer of 1974. He makes this astute observation:

[T]he conservatism of avenging angels protecting white innocence in a “liberal” metropolis gone mad: this is New York City’s unique contribution to the history of conservatism in America, an ideological tradition heretofore unrecognized in the historical literature. But without it, we cannot understand the rise of Donald Trump.

Trump's first foray into politics was his response to the Central Park Five case (which I wrote about for Salon here). He took out a full page ad in the New York Times that could have been lifted directly from "Death Wish." Likewise, in his current campaign, he's explicitly evoked the Charles Bronson image. As I noted in this piece from last October:

On the stump last weekend, Donald Trump entertained his followers in the wake of the massacre in Oregon with colorful fantasies of him walking down the street, pulling a gun on a would-be assailant and taking him out right there on the sidewalk. He said, “I have a license to carry in New York, can you believe that? Somebody attacks me, they’re gonna be shocked,” at which point he mimes a quick draw.

As the crowd applauds and cheers, he goes on to say “somebody attacks me, oh they’re gonna be shocked. Can you imagine? Somebody says, oh there’s Trump, he’s easy pickins…” And then he pantomimes the quick draw again. Everybody laughs. And then Trump talks about an old Charles Bronson vigilante movie and they all chanted the name “Death Wish” together.

His answer to the problem of gun violence is always that there should have been bullets "going in the other direction."

This is the essence of Trump's appeal. He's a TV celebrity who promises to be the billionaire avenger who will shoot first and ask questions later. He's tapped into that paranoid piece of the American psyche that believes civilized society cannot protect people from the dangers they believe are lurking around every corner. And as usual, these dangers all seem to coming from foreigners and racial minorities.

After today, Trump will turn to the rest of the northeast primaries and it's expected that he'll do well there. But he's going to be keeping one eye on the California primary all the way until June. If he has any hope of winning on the first ballot, he has to win big there. It's worth wondering if this avenging billionaire act will have the same potency there. There's no reason that it won't. After all, the other hugely popular vigilante films of the 1970s were the Clint Eastwood Dirty Harry movies, which were set in San Francisco. The whole country was gripped by fear of rampant crime and corruption, even the beautiful city by the bay couldn't escape it.

But there's a recent example of the phenomenon in more explicit political terms in California. After 9/11, the whole country was gripped by a new level of fear. Crime in the streets was a parochial concern compared to terrorism. Indeed, it was so exotic and foreign that it seems to have felt to many people more like the alien invasion along the line of "The War of the Worlds" than any other threat in American memory.

In 2003, California came a little bit politically unhinged. The people decided that a hike in the vehicle registration fees was so heinous that it required the governor to be recalled. What ensued was a spectacle even more ridiculous than the one in which we're currently engaged.

The election drew a number of celebrities including Ariana Huffington and former sitcom star Gary Coleman. (This is nothing new for the state that produced Ronald Reagan, of course.) But the superstar who ultimately won it was Arnold Schwarzenegger, an actor closely identified with a character more terrifying than anything the mere humans Charles Bronson or Clint Eastwood had played: the Terminator. This was someone people believed was equal to the task of fighting the alien invaders. He didn't get a chance to do that during his time in Sacramento, but he did lower those vehicle license fees. With extreme prejudice.

These two odd candidacies, more than a decade apart, show that reverberations from 9/11 are still being felt among a segment of the American public, which seems to be yearning for some kind of violent anti-hero to fight off their terrors. Trump could even be said to be a symptom of delayed reaction, a late demonstration of bravado after the fear has subsided.

Schwarzenegger endorsed John Kasich, so any hope of a Trump and Terminator tour of the Golden State seems unlikely. But we'll soon be seeing both of them on our TVs when Arnold takes over "The Apprentice." Trump has said that giving up the show was the hardest decision to make in deciding to run for president. (In fact, it's unclear whether he'll be more crushed if he loses the race or if Arnold gets higher ratings than he did).

The truth is that Schwarzenegger was better prepared for office when he ran than Trump is today but that's not saying much. And if he hadn't been born in Austria there's every reason to believe that he would have beaten Trump to the nomination. Even with his Hollywood sex scandals, he would have had a much smoother ride. He could appeal to that thirst for revenge by simply saying "I'll be back" rather than blathering on for hours about his poll numbers but more importantly, while Arnold may not be much of an actor he's still better at acting like a leader than Donald Trump ever will be.

Perlstein noted in "Invisible Bridge" that the Charles Bronson character in "Death Wish" ended up on the cover of TIME magazine. If they remade the movie today is there any doubt that he'd be given his own reality show?