Edward James Olmos unloads on "dangerous" Donald: "Trump is the worst-case scenario for this country" 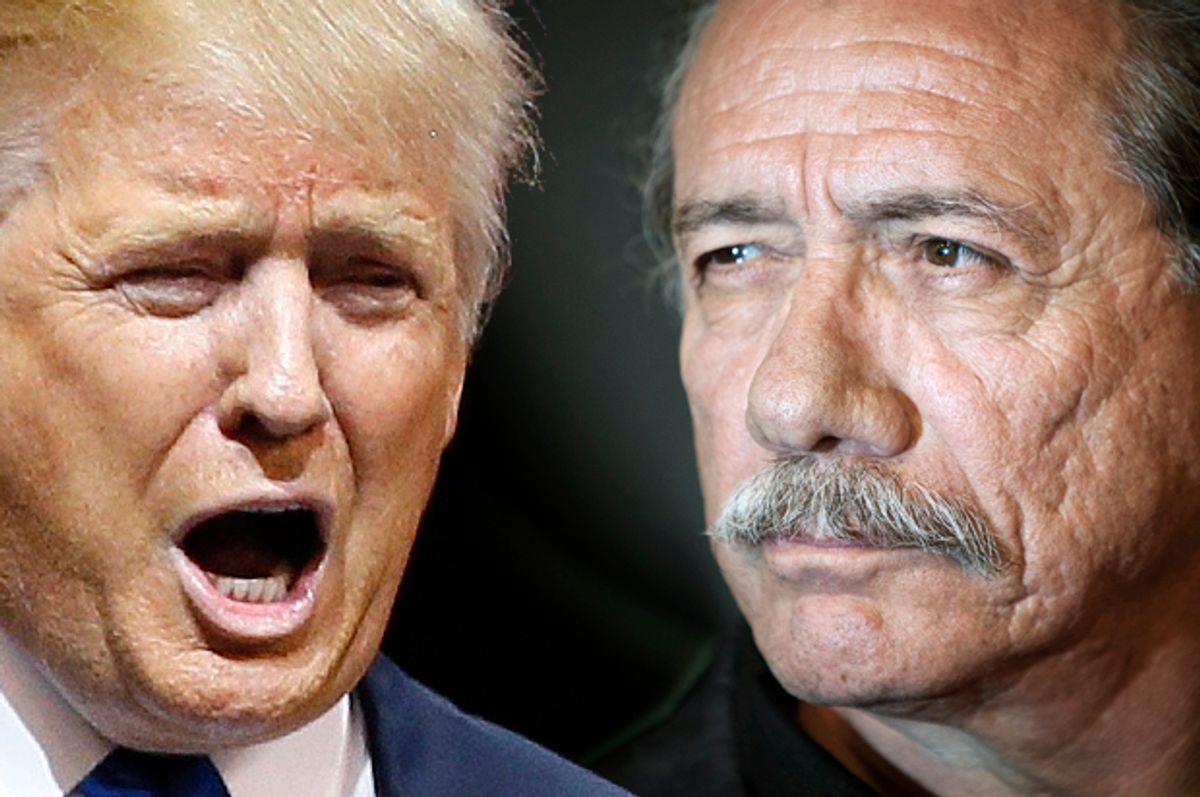 Edward James Olmos has been featured in the recent TV series “Battlestar Galactica,” as well as popular films including “Blade Runner,” “Stand and Deliver” and “American Me”. For decades, Olmos has also been involved in human rights and social change work such as improving America’s educational system, immigration, and expanding access to the arts for people of color.

I recently had the chance to speak with Edward James Olmos at Chicago’s Comic and Entertainment Expo (C2E2) about the 2016 presidential primaries, his career, and questions of diversity and inclusion in Hollywood. This interview has been edited for clarity and length.

Given your work in film and activism, what is your take on the Donald Trump phenomenon?

I think what is happening here is the same thing that happened in Venezuela when Chavez got in. It is almost like the people are sticking up their finger to the political structure. I think it is a very dangerous game to play, like it was in Venezuela. It became very interesting and very deadly. You can play that game and make the big changes and go with something different than the politicians that we have, and we should in many ways, but in this case this is going to be really interesting. With Trump, people are going to be put to the test.

Does the rise of Donald Trump reflect a lack of moral leadership in this country?

Of all people, given that Hillary is a “New Democrat” and neoliberal, Bernie has forced her to pivot a tiny bit to the left on some issues.

He did. Bernie’s intent at the beginning was to just do that and it worked. But what the establishment and public were not ready for was what Trump did. In some ways, Trump did what Bernie did…he came out of nowhere, and now all of a sudden became a contender. This situation is hard to process. Trump is the worst-case scenario for this country. This is a really difficult moment for this country. Trump has lots of issues and to let him into a position of power with that magnitude is very dangerous.

You are an accomplished actor: What do you think the secret of Donald Trump’s appeal is? As I have suggested several times, Trump is a student of professional wrestling. You can turn the volume off on TV and watch his gestures and then turn the volume back on and you see his stage presence. Never mind that Trump speaks at a fourth-grade level and uses emotion to manipulate his public. Does Trump have stage presence or are people just angry and pissed off?

People are pissed off. Trump has always been a barker, one of the strongest carnival barkers I have seen in my life. He has been refining his presence and making noise about his Trump dynasty for years. He is a cartoon. People didn’t take him seriously and they should have.

It is very difficult because he as the freedom to do what he wants. All I know is that more people are trying to register to vote than before and that is good.

Reflecting on your life and questions of inclusion, in terms of the recent “#OscarsSoWhite” controversy, how have things improved or not during your career for people of color in Hollywood and the broader film industry?

It is worse in some ways and better in others. It is worse in terms of the percentage of people who are working in the industry, in front of the camera, or behind the camera, than it was decades ago because of the number of people in the business. So yes, there are more people of color working in the industry, but as a percentage, we are less than 4 or so percent and we are not going to be able to change that until we have our own sense of empowerment, and understanding of the industry. People of color need their own backers. We should not need to go to other people to make our movies and other art forms. There a few culturally diverse folks in the industry with power but they are often monopolized by a small group of big names who run the whole business anyway.

I am working on this challenge as we speak with the Latino Film Institute Youth Cinema Project. We have over 700 students in the program. We are in the fourth grade, starting them young. The program is teaching students writing, directing, camera work, and all the skills they will need to be successful in film.

This reminds me of the conversations that were occurring around “Black” and Brown power” in the 1960s and 1970s and which, apparently, are still going on today.

Yes. I have been developing this project for ten years and it has finally grabbed hold. The American Film Institute, the Academy of Motion Pictures, and the CAA has joined up with us. This is unprecedented. They should have never let me get to this level. I have the understanding, and if they did not want me to own the ballpark they should never have let me get in the game.

In all of your roles you have maintained your dignity and self-respect as an actor of color. What has that cost you?

Fame and fortune. If you are chasing fame and fortune you would never do what I did. I have the total respect of the industry, the film community, but it is very difficult for me to make my films. My films take forever to make. I have a film coming out called “Monday Nights at Seven.”  It is a very different type of movie. A wonderful film written, directed, and edited by a young man, 37, and this is his second directorial. He and his wife wrote it. They have been working on this for 9 years. I have been working with him on it for seven. He is a Persian-American. And this project is an uplifting positive love story. It could really change things and be much talked about this year.

That is the key. To me, art is the backbone of the human condition. The backbone protects all the messages that go from the brain to the rest of the body. You break the second or third vertebrae you are a quadriplegic. You break something lower you are a paraplegic. The backbone is one of the most important bones in the body. That’s what art is—all art—but especially film, the audio-visual event, because it touches the conscious and subconscious mind, it allows messages to get from the brain to the other parts of the body. The key is for us to be able to be to really allow the backbone to have the strength and depth of character and understanding it needs.