Live music is a luxury now: Outrageous ticket prices make it harder and harder to support the bands we love

When "cheap seats" are expensive and VIP packages are out of control, seeing a favorite band is a serious splurge 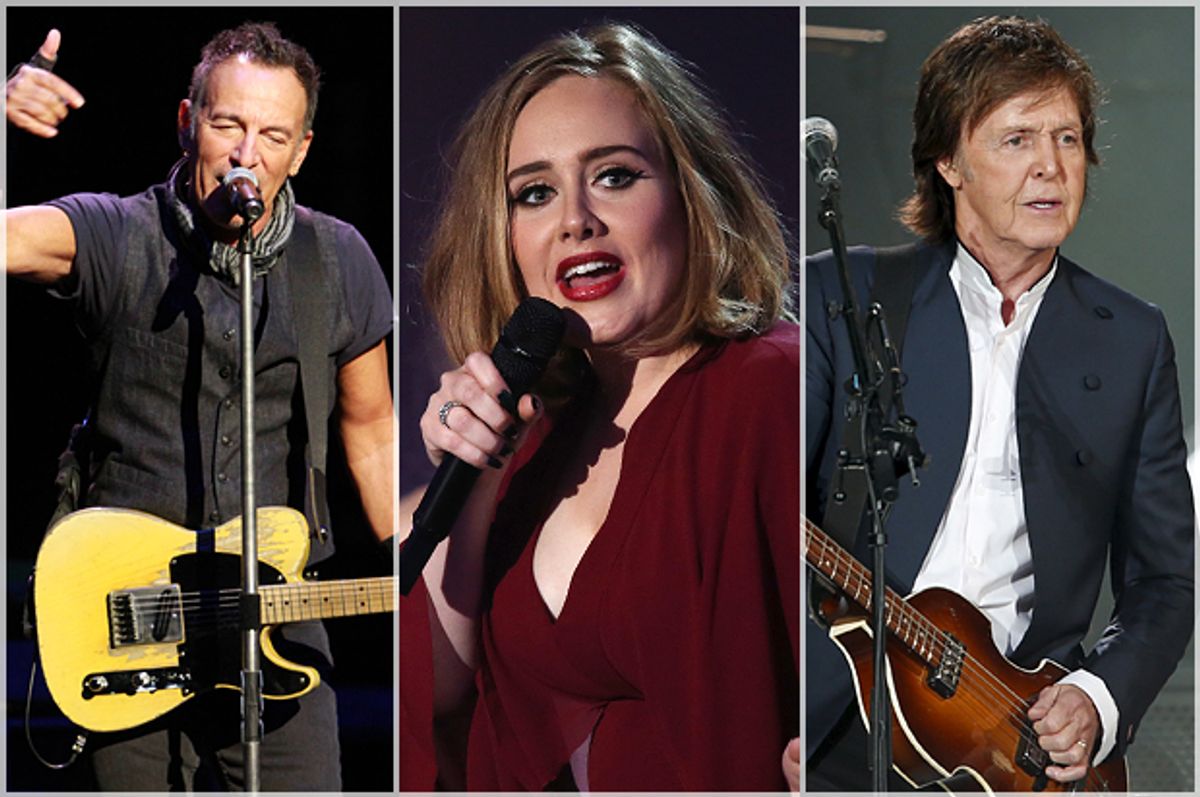 On Monday, Paul McCartney announced his first Cleveland show since 2002 at the downtown indoor basketball arena where the Cleveland Cavaliers play. Celebration quickly turned to mild anxiety in my household: Not only did my husband and I want to attend, but my dad was also interested in the concert, which meant we had to go for three tickets together. (Mom was all good, since she noted that she saw the Beatles. Can't argue with that.) The catch was, we had a budget—and the entire lower bowl, both in the seats and on the floor, was priced at either $153 or $253 per ticket, so they weren't options. The cheapest seats were $59.50, but only the five sections of nosebleed rows directly across the arena from the stage and then four upper-level sections flanking the stage were at this price point. Between our crew's mobility issues and a collective crippling fear of heights, those were also out.

That left trying to grab a trio of seats somewhere else in the upper bowl, at a cool $89.50 a pop. Thankfully, after some frantic browser maneuvering and email list signups, I managed to score three decent tickets via a pre-sale on McCartney's website. For a McCartney concert—an experience where fans know he'll play three hours, and perform just about everything you'd want to hear—the price felt worth it. Incredibly enough, these seats were significantly cheaper (42 percent less, to be specific) than what I paid per ticket for a February Bruce Springsteen & The E Street Band concert at the same venue. Those seats were better, of course, but were in the same general area, just on the lower bowl.

Granted, both of these shows were splurges, and involved artists with great personal significance; they were special occasion purchases, not an everyday or even every-few-months thing. And because I'm a journalist, I occasionally offset expensive shows like this one with free reviewer tickets, which balances things out. (Not always, however—there's a persistent myth that writers always get free stuff, which isn't necessarily the case.) And, above all, yes, McCartney is McCartney, one of the two remaining living members of the Beatles. He's in rarefied air, and people will gladly pay a lot of money to see him perform. (In fact, the Cleveland show even has $2100 VIP front row packages which include a whole suite of perks.) As a fan, I don't begrudge a legend for commanding ticket prices commensurate with his legacy and catalog.

Yet more and more, a ticket to a large concert by an established act is a luxury good, something equivalent to a "car payment," as a friend of mine quipped after shelling out for a pair of pricey McCartney floor tickets. Statistics back up this perception. Pollstar's 2015 year-end North American concert report revealed some eye-popping numbers on what it termed a "record year": "The total gross of the Top 100 Tours [hit] $3.12 billion, which is up 14% over 2014. The 42.08 million tickets sold by just the Top 100 Tours is up 10%, which is also a record. All of this comes with a record average ticket price of $74.25, an increase of $2.81, or 4%, over the previous year."

This trend of rising ticket prices started back in the mid-'90s, according to a 2001 ABC News story on concert tickets. Back then, "artists and concert promoters started realizing that many of the people sitting in the best seats had bought their tickets from scalpers, often paying hundreds of dollars more than face value. Since the industry was not seeing any of that profit, concert organizers decided to start charging premium prices for the best seats." In other words, this ticket pricing model is a classic case of supply responding to demand.

The kneejerk reaction might be "don't go to the show" or "stick to non-arena concerts." However, music isn't the only industry facing a surge in ticket prices. In pro sports, the practice of dynamic pricing—where the cost of tickets fluctuates depending on factors such as demand, importance of the game and opponent—is increasingly common. Movie theater tickets have also become pricier thanks to 3D movies, IMAX films and "the rise of luxury seating," as Variety notes. And then there's the secondary ticketing market, long the domain of scalpers and resellers, two groups that always seem to find ways to circumvent bot-blocking measures and other deterrents with ease. Adele tickets were a hot commodity right after her North American tour immediately sold out, and they're still going for hundreds of dollars today. McCartney's recently announced show at Busch Stadium in St. Louis, which boasted five tiers of tickets under $100, officially sold out in less than an hour. Yet the StubHub resale market starts at $85 a ticket, and that's for standing room only seats, while a $39.50-face value first base upper terrace ticket is running $95 on the site.

Of course, these secondary market prices only reflect what the resellers want to get, not necessarily what the market will bear. And if people want to risk waiting until closer to the show, there's a chance tickets might come down to reasonable levels. (That's what happened with some of the highly anticipated Grateful Dead 2015 reunion shows.) But for people who don't feel secure unless they have a guaranteed seat, the fact remains that live entertainment today comes at a hefty price. The days of sleeping in line overnight at a venue or waiting in line at a grocery store Ticketmaster outlet are long gone, but being fleet-fingered at 10 a.m. the day of an online on-sale to score great seats also sometimes feels challenging. And when a show sells out quickly, and expensive tickets immediately flood resale sites, it's a frustrating, anger-inducing experience: At that point, the perception is that an artist's fans are getting shut out, in favor of those just looking to make a quick buck.

Solving the expensive ticket problem and avoiding pricey shows isn't easy, and not just because fans are paying big bucks for seats. Many factors figure into a concert ticket price: the artist's guarantee, the size and type of venue, production and crew costs, and other assorted fees, among other things. Bigger show promoters with clout also frequently acquire independent promoters who book concerts at smaller, non-arena venues; in fact, news broke on Wednesday that AEG Live was "in final negotiations" to scoop up the New York City-based Bowery Presents, an influential company that puts on shows in major markets such as Philadelphia and Boston as well as New York City.

And tickets have a hefty price tag at venues of all sizes: A newly announced Dolly Parton show at a 2600-capacity Northeast Ohio casino offers seats starting at $99.50 apiece on up to $225, with an elaborate VIP package topping out at a hefty $1,950. Pre-fees prices for pavilion seats for summer shows at the local Northeast Ohio outdoor shed, Blossom Music Center, also vary wildly. Joe Walsh and Bad Company's tour had listed ticket prices from $32 to $132, while the Dixie Chicks' reunion tour commands anywhere from $77 to $145 a ticket; Dave Matthews Band, in contrast, is a reasonable $75 to $85. (VIP-level pavilion seats, however, were far more.) Throw in concessions, merchandise and (potentially) babysitting, and a night out at a show could look more like a large chunk of a mortgage payment.

For certain shows, there actually are ways to get around high ticket prices. The wildly popular Live Nation-sponsored Country MegaTicket offers fans the chance to pay a flat rate up front for guaranteed tickets to its series of summer country shows. Groupon tends to offer generous discounts on lawn seats at pavilion shows the week these shows go on sale. Plus, places such as Yahoo! Music stream live events online, while fans have been able to enjoy major festivals at home for years. Coachella's at-home viewing sessions even have a nickname, Couchella, and a robust Twitter hashtag. Still, it's clear that not enough people are staying away from live music (or declining to buy VIP packages) to make a dent in prices. Until promoters start feeling a hit to their wallets or bottom line, it seems like high concert prices are here to say.