Red-baiting Bernie: Republicans are itching to turn Sanders into Trotsky or Lenin

Democratic nominee Bernie Sanders would face a wave of "SOCIALIST!" attacks, but he's worked to inoculate himself 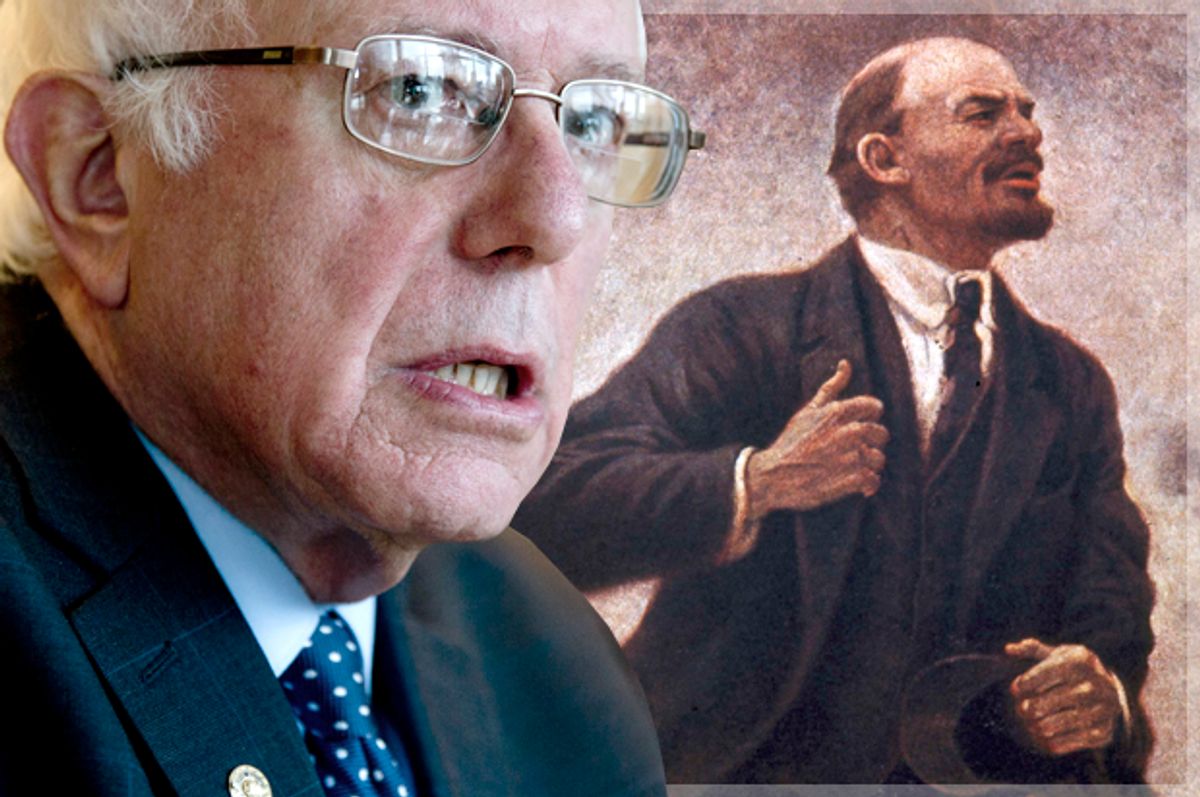 One aspect of the 2016 presidential cycle that has genuinely surprised me is the degree to which Vermont senator and self-described democratic socialist Bernie Sanders has managed to avoid being red-baited. There have been perfunctory attempts by partisans within both parties to slag Sanders as an agent of the international communist conspiracy – some pro-Hillary groups and surrogates tested out a few “Bernie is a socialist” attack lines last fall, and Rand Paul sounded the alarm that socialist President Sanders could tip the country towards “mass genocide” – but nobody has really put any heart or money into it.

And now, courtesy of Bloomberg’s Sahil Kapur, we know part of the reason why: Republicans are strategically holding their fire against Sanders because they’re positively giddy at the chance of running against a socialist in the general election. On the (increasingly slim) chance that Sanders emerges from the primary triumphant, he’d be greeted with a sustained fusillade of advertisements from his Republican opponent and conservative outside groups tarring him as a fellow traveler of Lenin, Stalin and Mao. What remnants of Cold War anxiety still exist would be viciously poked at in portraying the frumpy, wild-haired senator as an existential threat to the American way of life.

It make sense that Republicans are excited by this prospect – they spent decades developing and honing the sort of guilt-by-association attacks that sought to link garden-variety Democrats to the worst abuses of communism in the 20th century, but those tactics have lost their sting in the decades since the Soviet Union collapsed. Conservatives tried mightily to replicate them with Barack Obama, attempting to impute onto him the ideologies of far-left people who passed through his orbit, but to no avail. In Sanders, they would have a chance to run against someone who actually refers to himself as a “socialist,” thus making their jobs that much easier.

The consensus seems to be that these attacks would be devastatingly effective and put a serious dent in Sanders’ chances for a general election victory (that was my concern several months ago). But now I’m not so convinced, mainly because I think Bernie has taken some steps towards inoculating himself against these sorts of attacks.

Unlike Republicans like Ted Cruz who base their pitches largely on ideological purity, Bernie spends a lot of his time on the trail talking about policy. He doesn’t present himself as a “socialist.” Instead, he lays out a domestic agenda and frames it as a policy roadmap for catching the United States up to the rest of the developed world. The Bernie pitch isn’t “socialism is great;” it’s “why the hell are we the only people who don’t have these nice things?” That, I think, helps to take the bite out of the “socialist” barb a bit. What he’s advocating – universal healthcare, paid parental leave, etc. – is considered routine in places like Canada, Britain, and Scandinavia, so it’s a bit difficult to paint him as a Bolshevik radical based on his platform.

To the extent that Sanders does talk about ideology, he presents his concept of democratic socialism as being rooted in economic fairness and in line with the Democratic tradition. In a big speech last November, Sanders defined his democratic socialism by citing both Franklin Delano Roosevelt and Martin Luther King. Much of what he advocated in the name of democratic socialism didn’t stray too far from the standard Democratic playbook: affordable college, higher minimum wage, fighting climate change, and a more progressive tax code. In isolation, “socialism” is a politically toxic word that connotes disqualifying radicalism, but the socialism Sanders advocates isn’t terribly radical.

But, of course, such subtleties are not taken into account when mounting large-scale smear campaigns. And as Ed Kilgore writes, there are very likely some moments of left-wing activism in Sanders’ past that will be ripe for aggressive exploitation by opposition researchers and Republican ad makers. So while Bernie has taken some steps to make himself more mainstream, there’s still a lot of political history he hasn’t been forced to address. The question would ultimately come down to Sanders’ political skill and the degree to which the country still cares about the politics of the Cold War.

Regardless of what happens, it’s a remarkable achievement on Sanders’ part that we’re even discussing the mainstream viability of a presidential candidate who gladly self-identified with what was, until very recently, one of the dirtiest words in American politics.