While New York Republicans were giving him a stinging rejection, Ted Cruz tried pretending he was a GOP savior 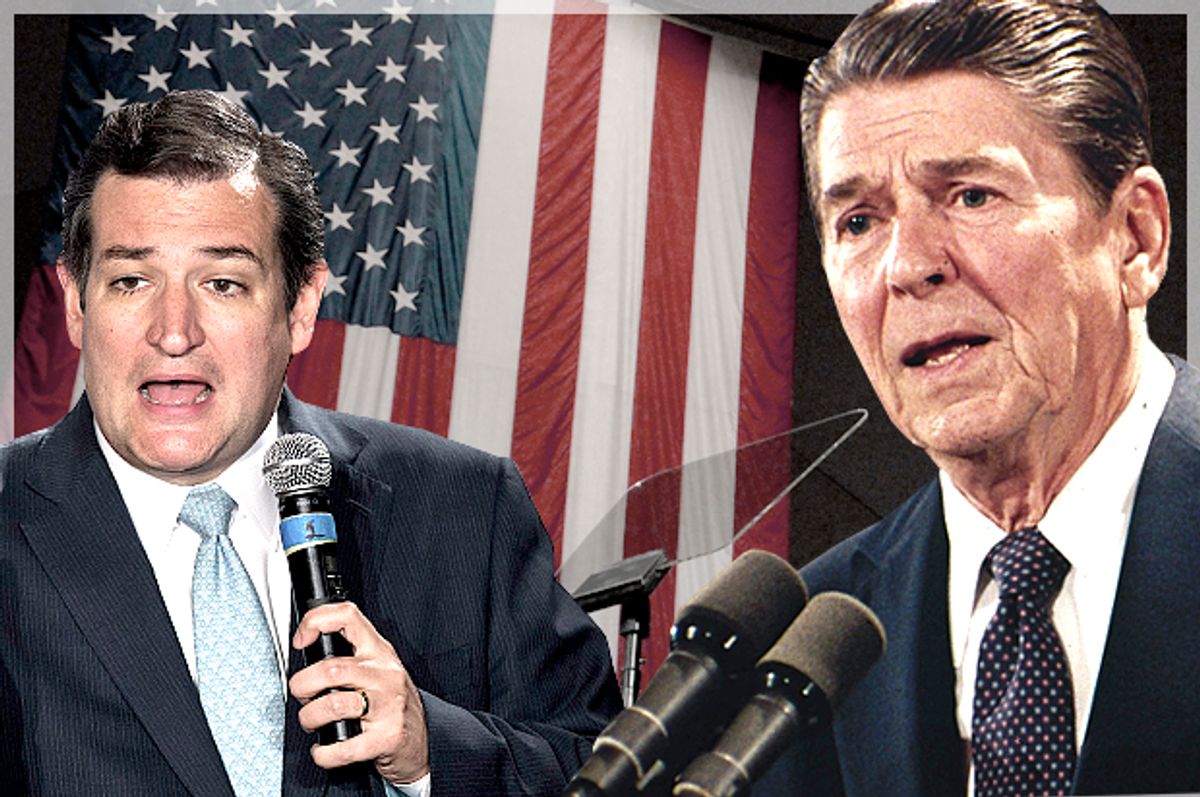 Ted Cruz desperately, desperately, desperately wants to be Ronald Reagan. It’s become standard practice among Republicans and conservatives to treat Reagan as the semi-divine ideal of right-wing politics, but Cruz takes ritualized Reagan worship to heights we haven’t seen since Scott Walker slinked off the presidential stage. As the New York primary results came in, Cruz delivered a speech to supporters in Philadelphia that saw the candidate try hard – way, way too hard – to convince the political world that they were looking at the second coming of The Gipper.

His remarks were studded with references, both explicit and implicit, to Reaganism. “We have learned that America is at a point of choosing,” an obvious call-back to Reagan’s “A Time For Choosing” speech from 1964. He lauded both Reagan and John F. Kennedy (the scion of one of the most politically powerful families in the country) as “outsiders.” The entire speech was intended as a “Morning In America”-type riff that cast Cruz as the transformational figure who will lead the country out of whatever malaise it might be feeling. Only it was awkward, treacly, and a bit weird. “You may have been knocked down,” Cruz said at one point, “but America has always been best when she is lying down with her back on the mat and the crowd is given the final count.” At one point Cruz referred to “the wide-eyed youth of any age that haven’t given up on the hope that tomorrow will be better.” It felt like Cruz and his team wanted to write a speech that sounded Reagan-y and just went with whatever clichéd nonsense came to mind first.

More than anything else, Cruz’s speech was absurdly ill-suited to the moment. Here was Cruz casting himself as a transformational figure while the New York returns showed him getting absolutely obliterated – Cruz pulled down less than 15 percent of the statewide vote and got skunked on delegates. As Cruz took the stage in Philadelphia to explain how he’ll stitch the Republican Party and the country together, he was being mathematically eliminated from securing a delegate majority by a state whose values he dismissed as incompatible with those of the rest of the nation.

And that gets to the larger problem: Ted Cruz is not a unifying figure, and he’s very bad at pretending he is. Speaking to the Philadelphia crowd, Cruz said (emphasis mine) “today, as Republicans, we agree on a lot, and sure, areas of lesser agreement exist as well.” The euphemistic “areas of lesser agreement” are where Cruz set up camp to conduct internecine warfare on the rest of his party, casting them as sellouts and positioning himself as the only voice for true conservatism in Washington. Just a few days ago, Cruz defended calling Senate majority leader Mitch McConnell a liar last year. The day before New York voted, Rep. Peter King (R-NY) said he’d rather take cyanide than see Cruz win the nomination. Republicans do not like Ted Cruz, and that is just how Cruz planned it.

To the extent that he is pulling party figures to his side, it’s because he’s the only semi-viable candidate left standing against Donald Trump. His roster of endorsements is full of people who state outright that they’re backing Cruz because they feel they have no other choice. Say what you will about Ronald Reagan, but he actually swayed people to his cause. Cruz, by contrast, is the candidate that Republicans hate slightly less than the frontrunner.

Cruz is pulling this great unifier routine because he feels it’s his Reagan-esque destiny, but also because he’s stuck for options. He can’t beat Trump by amassing delegates, so his path to victory now rests on securing enough support from the party establishment to help wrest the nomination from Trump at a contested convention. Establishment Republicans don’t want Ted Cruz, but they do want “Ronald Reagan.” Cruz is trying to provide a reasonable facsimile of that and trying obscenely hard to be the sort of politician that he isn’t.