This election is blinding us to a Wall Street outrage: Inside the media's negligent response to a foreclosure disaster

While banks are finding new ways to rip off homeowners, the press only cares how it affects Julian Castro's VP odds 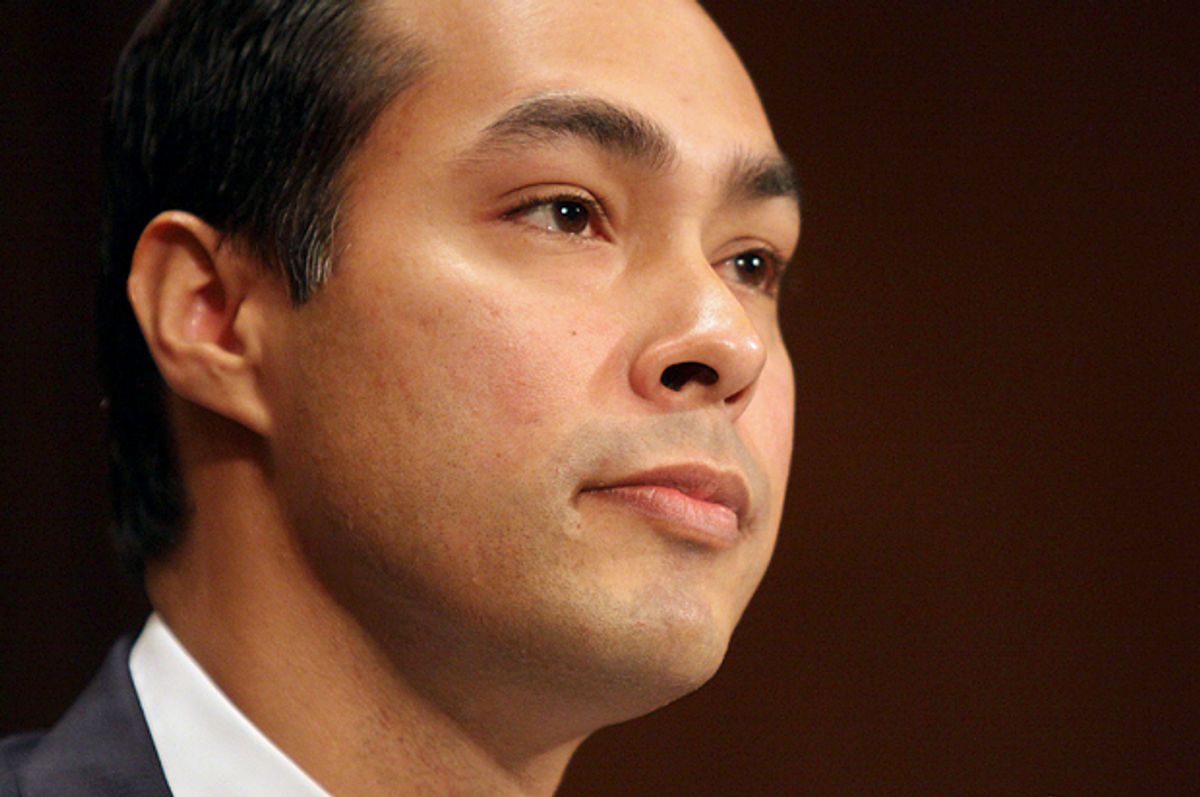 One of the biggest problems with the permanent campaign mentality we’ve succumbed to is that every issue gets folded into the presidential election. Last week we saw a perfect example. An activist group that has for years been criticizing pernicious practices at the Department of Housing and Urban Development (HUD) escalated their campaign, known as Don’t Sell our Homes to Wall Street. And the only thing the media cared about was how it would affect HUD Secretary Julián Castro’s chances for the vice presidency.

Politico won the day with the headline “Progressive groups target Julián Castro.” Progressive caucus co-chair Raul Grijalva had to explain to Buzzfeed that he wasn’t trying to torpedo Castro’s VP bid, entangling the entire matter with intra-Latino politics. Castro himself turned around the campaign, telling NBC News that he thought “it was really about politics and the presidential race and not really about the policy.”

This is dumb. Housing advocacy groups have been working on this issue since well before Castro became HUD Secretary in July 2014. They represent communities of color that have been devastated by foreclosures and are now seeing the same financial players who precipitated that crisis come back into their neighborhoods to wreak havoc. And at a time when they’ve begged for mortgage relief for troubled borrowers, they’re seeing that relief go to the Wall Street firms instead.

So what is this all about? In 2010, HUD (under its former Secretary Shaun Donovan) instituted the Distressed Asset Stabilization Program (DASP) to deal with seriously delinquent loans. HUD doesn’t originate loans, but the Federal Housing Administration, which it operates, insures mortgages for banks. When banks successfully file an insurance claim after a loan goes into default, the mortgage transfers over to HUD.

These mortgages, which are at least six months late, piled up on HUD’s books, so they created DASP to dispose of them. Under the program, HUD runs auctions to sell the loans in bulk, hundreds at a time, to the highest bidder. The proceeds bolster the FHA insurance fund. Since the loans are so delinquent, buyers only take them if HUD sells at a severe discount. As of this January, HUD reports that they have sold 105,500 loans through DASP, with prices as low as 41 percent of the mortgage’s face value.

The stated mission of DASP includes giving homeowners “a second chance at avoiding foreclosure.” HUD hoped that selling the loans at a discount would give investors an incentive to pass some of those savings to the borrower, reducing the principal on the mortgage and keeping them in their homes. And HUD did stipulate that the investors cannot pursue foreclosure for six months after purchase (that’s now been elevated to one year), giving breathing space for restructuring. But these hopes are not translating into good outcomes.

Nearly all of these loan sales have gone to banks, hedge funds, or private equity firms, which have prospered from scooping up distressed loans at a discount after the crisis they helped cause. And they’re more interested in foreclosing on borrowers and developing the housing asset than stabilizing neighborhoods. Firms like Blackstone have become America’s largest landlords, buying single-family homes and renting them out at a profit. Often the homes are held vacant and flipped when neighborhoods gentrify.

“Hedge funds and private equity firms are getting these loans for cents on the dollar,” said Jonathan Westin of New York Communities for Change, one of the coalition partners in the campaign. “They’re getting the principal reduction that’s supposed to go to the homeowners, and they just pocket it and tell homeowners to pay up or get out.”

The Atlantic profiled several homeowners last year who lost their homes to investors who bought mortgages through DASP. After foreclosure, HUD has no requirements in place to ensure the resulting housing stock stays affordable for the community, another central HUD mission.

Housing advocates identified problems with DASP within months of the first auctions. Community organizing groups learned of it later and issued a formal report in September 2014, well before the presidential race heated up. They wanted to create a point system to privilege non-profit community development financial institutions (CDFIs) with track records of helping homeowners to purchase the mortgages. They also believed HUD could add requirements, regardless of the purchaser, that encouraged stabilizing neighborhoods, with principal reductions and affordable housing on the back end.

The campaign followed up at least six times over the past two years, most recently last week. This included Congressional letters, a U.S. Conference of Mayors resolution, and a high-profile condemnation from Senator Elizabeth Warren last September, urging HUD to stop “lining up with the Wall Street speculators.”

Castro, in his NBC News remarks, claimed, “we’ve made the program that they were talking about much better for homeowners.” Indeed, in April 2015, HUD instituted a few non-profit-only auctions, held webinars and trainings to encourage CDFI involvement, and raised the ban on foreclosures from 6 months to a year. But the troubling trends of the program remain. According to HUD data, in July and November 2015, after HUD announced their changes, they sold 15,309 mortgages to Wall Street firms and only 172 to non-profits. That translates to 98 percent of the loans going to Wall Street, a worse ratio than before the campaign began.

The six-month extension before foreclosure hasn’t benefited homeowners in the long term either, especially since delinquency fees continue to accrue. “All adding six months does is add more fees up,” said Elyse Cherry of Boston Community Capital, one of the leading CDFIs, which has not gotten involved in HUD sales. “There’s a disingenuous quality that adding time will solve this problem.”

HUD claims in a DASP report that foreclosure has been avoided for 43 percent of all borrowers in the sold loans. But this is deliberate obfuscation. Included in that number are 15,000 “graceful exit alternatives” like short sales are deed-in-lieu of foreclosure, the end result of which is the homeowner losing the home. Only 10,000 of the 105,500 who had their mortgages sold through DASP, less than 1 in 10, remain in their homes with a newly modified, performing loan.

These outcomes could be greatly improved. For example, HUD could require investors to identify borrowers with income that could handle a reduced mortgage payment, and then offer a new loan themselves or contract with a CDFI to take on the risk. “We would do that in a heartbeat,” said Elyse Cherry. If the mission is truly to stabilize neighborhoods instead of finding the highest bidder for the loans, mandates could be written into the purchase contract.

“What I'm hearing is that if they set those outcomes, many in this market will find a way to make it work,” said Amy Schur of the Alliance of Californians for Community Empowerment, another coalition partner. “There’s nothing holding back HUD's ability to declare outcomes and hold the purchasers to it. Maybe the worst will leave the market, but that's a good thing.”

Whatever the solution, the issue has nothing to do with Julián Castro’s political career, or his ethnicity, to suggest that the agency he runs is hurting communities and abandoning HUD’s mission in favor of a quick buck. “We’ve been dedicated for years to saving our neighborhoods,” said Amy Schur. “Having a federal agency dedicated to affordable housing sell off housing stock to private equity firms and hedge funds is problematic.”