The reserved musical icon spoke hard truths at the Grammys -- about art, artists and our disturbing racial politics 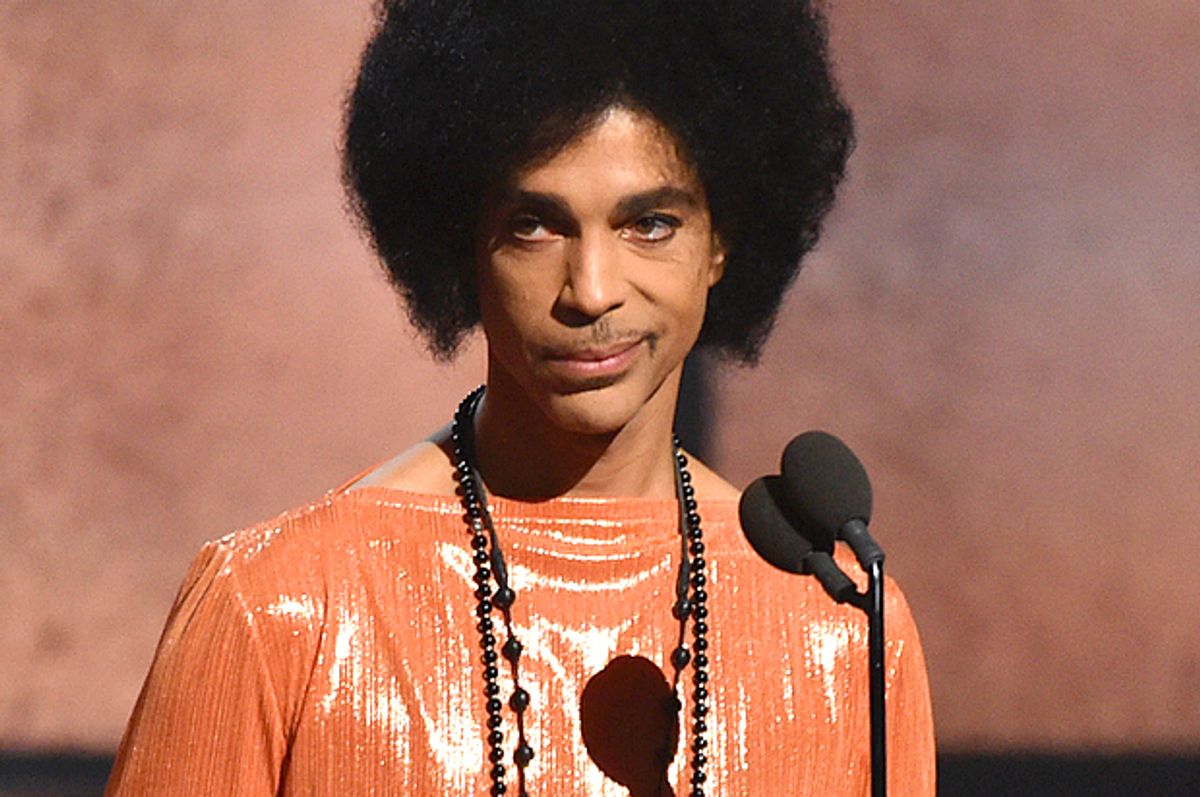 Near the end of the 2015 Grammy Awards, musical icon Prince presented the Grammy for Best Album, with this preamble: “Albums still matter. Like books and Black lives, albums still matter.” In just over ten words, Prince reminded us that the Black Lives Matter movement that captured our attention in the last five months of 2014 is having the necessary consequence of sparking a new chapter in our national artistic imagination. A long-held tenet of our liberal American credo is that art is integral to politics.

But in Black music of all genres, politics of late could only be found in one-off songs on otherwise pop-friendly albums or among indie artists, often unknown to the mainstream. As Salamishah Tillet noted recently in an article at the Atlantic, with the release of new music from J. Cole, Lauryn Hill, D’ Angelo, and this week’s new track from Kendrick Lamar, protest music has returned. And we are sorely in need of the clarity and inconvenient truths that art allows us to tell, the conversations it sparks, the space for emotion that it makes, the questions it poses, the pressure points in an aching national body politic that it exposes.

For instance, what should we make of Prince’s implicit claim that albums, books and Black people have become devalued? And since he links these claims together, what is the system that has actively participated in the devaluing of good music, good books, and Black lives (whether good or bad, if lives can be so valued)? As music goes, only one album in any genre went platinum in 2014, and it was the “Frozen” soundtrack.

Pharrell, for example, who donned a hoodie and put his hands up alongside his dancers during his performance of his blockbuster hit “Happy,” only received about $25,000 in total compensation for his song from Pandora, even though it was played over 43 million times. With streaming services like Pandora, Spotify, and Songza, there is little incentive to buy albums, unless like me, you buy the albums of artists you want to support on principle. But capitalism is not much in the way of principles.

And as Amazon becomes what one of my good friends called “the Wal-Mart of the Internet,” wielding an incredible amount of control over the price of books and publishing, book retailers, large and small, struggle. A culture where books are not readily accessible, unless one has a mobile device of sufficient size, does not bode well for the people. This matters in a moment where we need to be doing some of our most serious thinking about the challenges that face us.

Prince’s remarks also speak to something less easily captured, namely a waning attention span. Very few artists produce albums that can capture your attention for a full sitting.  D’Angelo’s “Black Messiah” is a recent exception. Another friend jokes that she rarely reads any article we send her from beginning to end. I, too, find it difficult to focus sometimes on a piece of writing from beginning to end.

But in stating the obvious, that good books and good albums still matter, Prince’s remarks remind us that it is art, our ability to sit with art and all the possibilities it helps us to imagine, that is so important to our ability to value all lives, and Black lives in particular.

But under conditions of neoliberalism, which favor the unregulated, unchecked reach of huge multinational corporations into every area of our lives, art and music and the people who produce them all become merely marketable commodities. Thus, Black artists are asked to perform on stage, even though our musical output is economically undercompensated, and our artistic aesthetic is appropriated by the likes of Iggy Azalea and Macklemore, and the hot blue-eyed soul artist of the moment. To the Recording Academy’s credit, Iggy received no awards this year.  And this year’s darling was blue-eyed soul singer Sam Smith. Though I am a fan of Smith (the boy can sang), I am not a fan of the way white people are often enamored of and quick to reward white soul, while they exploit and dismiss the genius of Black soul.  In the rap categories, Kendrick Lamar, who was snubbed last year, and Eminem came away the big winners. Notably, no Black women won in any rap categories.

What does the systematic exclusion of Black women from categories other than R&B mean for our art and our politics? Has the mainstream Black Lives Matter narrative yet determined how to properly incorporate a critique of gender and sexism? For instance, during the show, Brooke Axtell, a survivor of domestic violence performed with Katy Perry, by doing a short monologue about intimate partner violence. Her remarks came after President Obama appeared in a video advocating for an end to domestic violence. Those moments were incredibly important, particularly for many of the young women who I’m sure tuned in to the show.

Still the overt political statements on display, one from Black people, one from white women, have not yet made space for the intersections. This failure to consider how women of color, both cisgender and transgender, fare under conditions of intimate partner and state violence remains a continuing challenge of the movement being birthed.

Even Beyoncé, who offered an uninspired performance of Thomas Dorsey’s gospel classic “Precious Lord,” after snubbing neo-soul artist Ledisi to do so, chose to lay aside her feminist politics to highlight the plight of Black men, who stood behind her holding their hands up, while she sung.  Later she released a video that explained her choice to focus on Black men, since they are the most visible victims of state-sanctioned violence.

Given clear moments of contradiction in the artistry and politics of performers like Beyoncé and Pharrell, who once proclaimed himself “the new Black,” unencumbered by the vicissitudes of racism, I am left pondering the impact of these three deliberate racialized political gestures. Notably, no other artist, presenter or entertainer felt it important to affirm that Black Lives Matter, and only Prince used his opportunity while speaking to say it.

Despite naysayers, Al Sharpton being chief among them, Black Lives Matter has pierced the consciousness even of celebrities, so that they are now engaging with the racial politics of the moment, even though the continued protests have dropped out of the news cycle. Moreover, Kendrick Lamar, who came under huge fire in social media a few months ago for suggesting that high levels of intraracial crime in some Black communities undercuts our right to be mad about racialized police violence, engaged his critics on his release this week “The Blacker the Berry.”

While the song considers all the ways that white supremacy has turned Black people into killers, Lamar ends yet again pondering, "Why did I weep when Trayvon Martin was in the street when gang bangin made me kill a n***a Blacker than me? Hypocrite." That Lamar cannot narratively get past the horrific crime he has witnessed in his own community and that he calls himself and others hypocrites for crying over Trayvon Martin’s slain body while apparently not doing so for Black men slain by other Black men gives lie to the idea that Black people don’t care about "black-on-black crime." In fact, frequently we internalize the faulty narrative that we don’t have the right to be enraged about police killings of unarmed Black people, because of intraracial crime. Kendrick doesn’t seem to understand that most crime is intraracial. But he’s right that we all have to reckon with the monster that is internalized white supremacy and anti-Black self hatred.

What we cannot do is buy into the political and cultural logics of neoliberalism, wherein the failure of individual subjects to “self-regulate,” “be empowered,” and “take care of themselves” means that we are failures as human beings or that we should be locked up in a non-rehabilitative, ever-more punitive carceral system. Resisting neoliberal logics means asking why the means of self-care elude us, why the erosion of communities and schools and art is happening. Resisting means asking how the logic of neoliberalism daily forecloses our ability to be fully human.

It is this struggle that we hear and are made privy to in Kendrick’s song, showing us how Black people fare under conditions of neoliberalism. We internalize modes of self-governing that are harmful because they are rooted in a narrative of Black pathology and a broad cultural dishonesty about the march of anti-intellectualism (hence Prince’s quip about books) and foreshortening of broad cultural sympathies (which we might take away from Prince’s quip about albums.)

Kendrick’s art reckons with this pain and does not easily makes its way around these contradictions. That is the kind of art that we need. Long after the regular protests wane, young people will be sitting in basements and locked upstairs in bedrooms, headphones on blast, pondering these questions, reckoning with their implications.

Perhaps they will be haunted, as I have been, by D’Angelo’s words on his track “The Charade,”: “all we wanted was a chance to talk/’Stead we only got outlined in chalk/Feet have bled a million miles we’ve walked/revealing at the end of the day, the charade.”

This is, I conclude, what the Crunk Feminist Collective has termed a “percussive moment,” one in which “the tension between competing and often contradictory political and cultural projects …is both disruptive and generative.” There is a generative energy and spirit in the air. The seeds of movement have been planted in the freshly tilled soil that is made each time we dig an unearned, undeserved grave. As we listen to and watch our artists conduct our second act, those seeds are being fertilized. Someday they will sprout and begin to bloom.