The decision to replace the 7th president with Harriet Tubman has predictably caused protest. It shouldn't 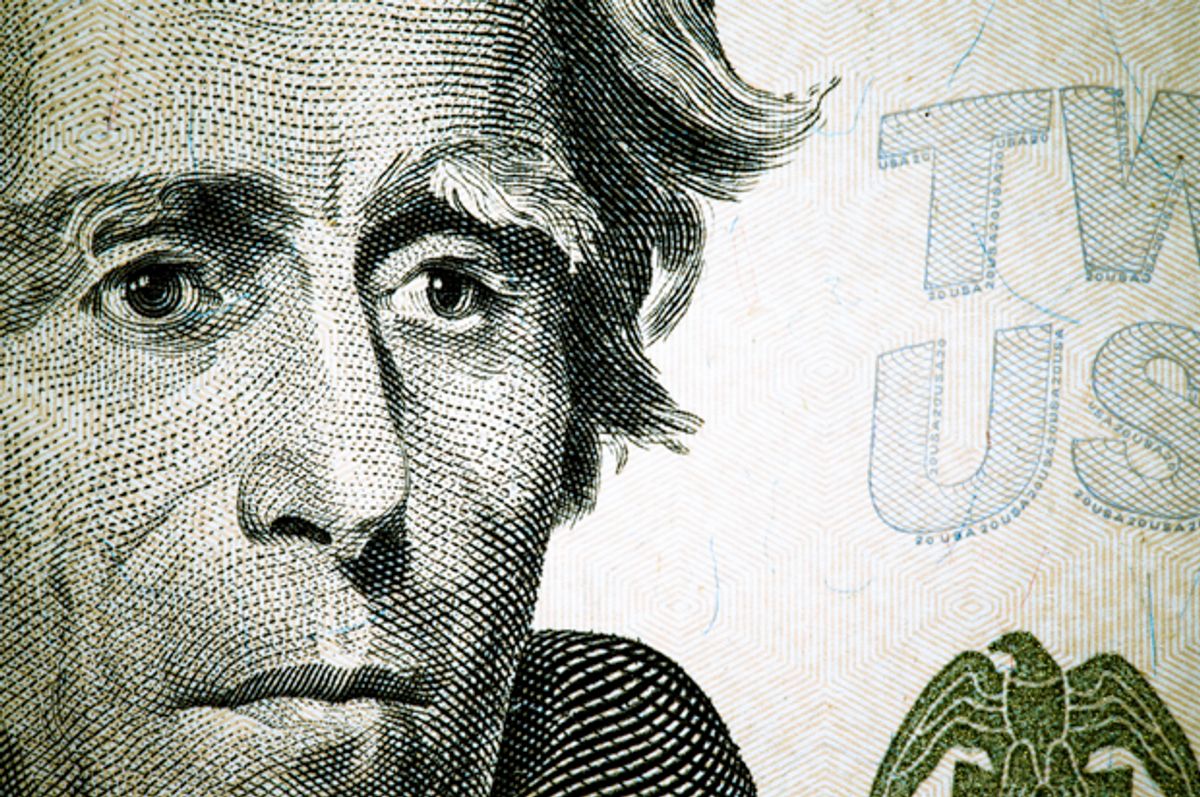 It’s official: Secretary of the Treasury Jack Lew has announced that abolitionist Harriet Tubman will replace President Andrew Jackson on the $20 bill. And, while Jackson will still reportedly remain on the reverse side of the bill, the move is nonetheless a momentous one.

Naturally there are many people who will complain about this decision, but since Tubman’s legacy leading slaves to freedom through the Underground Railroad is beyond reproach, these critics will most likely turn to defending Jackson. As a preemptive rebuttal to such arguments, here are the four reasons why Jackson needs to go:

When it comes to Native American history, Jackson ranks right up there with the worst genocidal tyrants. Because white Southerners in the early 19th century craved the land inhabited by native tribes like the Choctaw, Chickasaw, Seminole, Creek and Cherokee, they needed the government to expel the original inhabitants so they could seize the property for themselves. Although the law only permitted voluntary and peaceful removals of natives from their land, Jackson ignored the law (as well as the Supreme Court itself) and forcibly expelled the Choctaws and Creeks from their ancestral home. Thousands of them died during the brutal journey westward, prompting them to refer to their exodus as the “Trail of Tears.”

Although the term “spoils system” became popular during Jackson’s presidency, this isn’t because he introduced the practice of firing existing government employees and replacing them with his own friends and supporters. Presidents and other democratic leaders had been doing this since the dawn of recorded history. But, without question, Jackson made the problem much worse. In his first annual message to Congress, Jackson openly advocated rotating public offices among party supporters, claiming that an applicant’s qualifications mattered less than avoiding the creation of a class of corrupt civil servants. While this position would have made sense had Jackson established an impartial hiring method in its stead, when he fired 20 percent of federal officeholders during his presidency, they were almost invariably replaced by pro-Jackson partisans without regard to their individual merits.

Roughly a decade before the Mexican-American War annexed the West and increased America’s size by 500,000 square miles, Jackson sowed the seeds of discontent between our two countries. In keeping with his expansionist policies, Jackson sought to purchase the Mexican border province of Texas so that whites could acquire land there. Instead of outright invading Mexico, Jackson encouraged American settlement into Texas and attempted to purchase the territory through diplomatic overtures that only increased tensions between our two countries. When Sam Houston led a revolt against the Mexican government in 1835, Jackson avoided supporting either side, but he enthusiastically backed James K. Polk (his protégé) when the latter ran for president on a platform that made outright war against Mexico inevitable.

If there is one positive aspect of Jackson’s legacy, it was his courageous battle against the Second Bank of the United States. “It is to be regretted that the rich and powerful too often bend the acts of government to their selfish purposes,” he declared in a famous statement vetoing renewal of the bank’s charter, arguing that any privately-owned centralized bank could manipulate currency to exploit low-income Americans and exert undue influence over economic policy. The good news is that Jackson succeeded in destroying the corrupt centralized bank; the bad news is that, eighty years later, the Second Bank of the United States would be replaced by another central banking system, the Federal Reserve. Considering the pride he felt in destroying one centralized bank, it stands to reason that Jackson would have been appalled to find his visage adorning a common form of currency from another one.

After spending our entire lifetimes using money that only features white men, it is necessary (indeed, long overdue) that we feature a figure who doesn’t fall within that narrow demographic profile. In light of her remarkable contributions to the cause of racial equality, Harriet Tubman is an ideal choice to break this color and gender line in one fell swoop. That said, even if Tubman had replaced Alexander Hamilton on the $10 bill (which was originally rumored to be the plan), Jackson still should have been ousted from the $20. His own poor legacy on race relations, honest government, and honorable foreign policy demand it… and, frankly, it’s quite possible that he would have wanted this anyway.

In short: If anyone tries to tell you that Jackson deserves to stay on the $20 bill, don’t listen to them. They don’t know what they’re talking about.