Prince and the queer body: Our dirty patron saint of pop gave me permission to think outside the gender binary

Prince’s shapeshifting, freedom and mind-blowing sexuality changed what and how I thought men and women could be 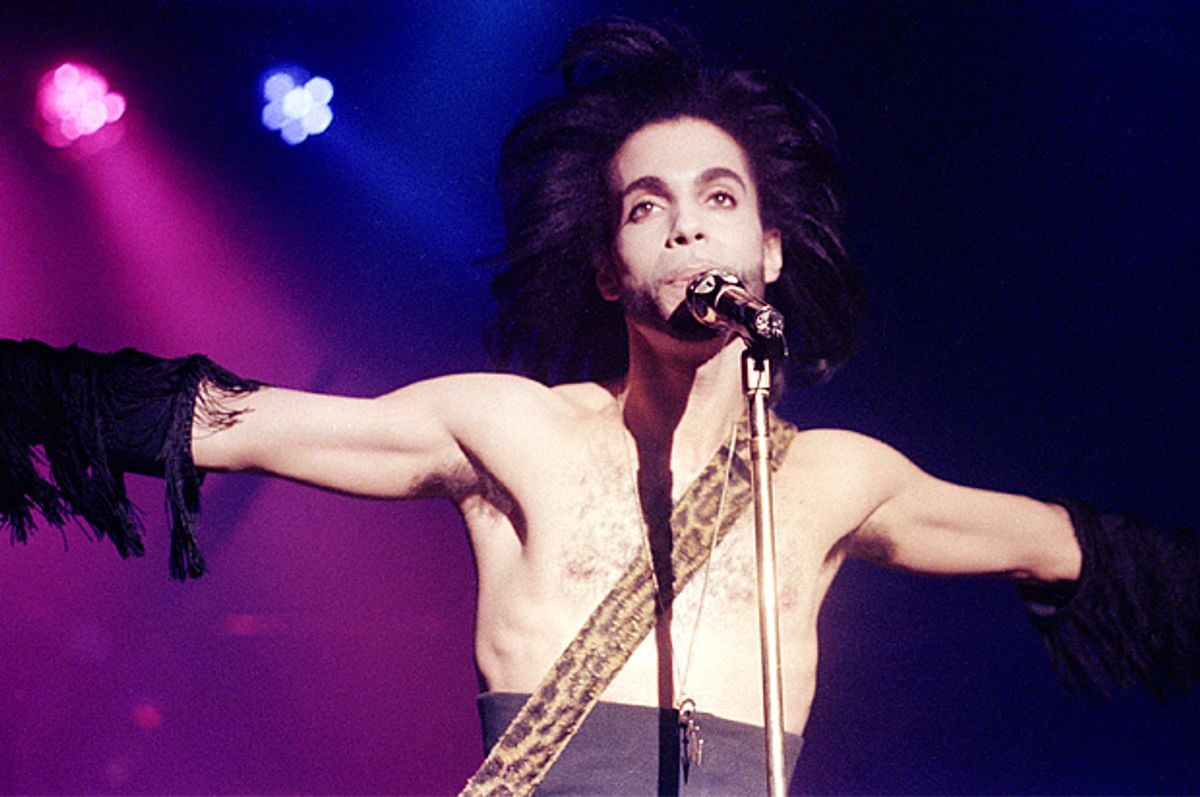 The musical virtuosity of Prince was rivaled only by his status as a sex symbol. A paragon of eroticism, not only did he give us soundtracks for every kind of romp, he embodied sexual possibility. His look, his body, his movement, his beyond-he-ness was a cooing, screeching example. Sex is good. Bodies are good. Gett Off. He was, for this queer woman and so many others, a Big Fucking Deal.

“I’m not a woman, I’m not a man, I am something you will never understand.” The line resounded in my ten year old mind somewhere outside a small Canadian town. Listening to the radio in the backseat of a Suburban, I didn’t know what the line meant, but it was a strange wave of relief. There are more options than women and men? It was the first hint I’d gotten that such categories could be questioned, let alone rejected.

The “Kiss” video confirmed it: slim and made-up, this singer was challenging our limited sense of "man," yet he was the manliest thing I’d ever seen—in an asymmetrical half-top. Moving in a way my young self couldn’t place as masculine or feminine, he was singing about someone being ‘his girl’ and there was a badass woman—fully clothed in a red suit—playing guitar. He was dancing half-naked around her (Wendy Melvoin). It was Derridean recognition at first sight. Not just of androgyny or gender-bending, but of sheer queer possibility.

This was someone different, wild, real and awesome—a kindred spirit candle in the window.

Even before lust entered the picture, Prince opened a new realm of being for me and those around me. In a culture that implies that people, especially girls, can either be smart or care about being pretty, here was a person who was clearly both brilliant and enamored with his own beauty. And his looks were his. And yes, he was a man, though his existence called for more words, options, homage. Men could be like that. Men could look like that. Eyeliner and mustache, sissy-ish posing and growling foreplay. This confidence transcended gender roles as deftly as his dance moves walked the line between aggressive and alluring. A young naive Canadian, the racial dimensions of Prince were mostly lost on me, though I’d read Hilton Als’ take, among others, later. I was awakening to a world divided by gender and Prince was my first genderfuck, shimmering: men can be this, women can be that. Neither, both—Prince’s shapeshifting and the ease with which he did it was the single most formative blessing in my understanding of sexuality.

I didn’t understand and I liked it. That was part of the draw. I was a skinny white Canadian country girl, but I could see that he was his own and the fact that that was alright gave me a certainty that has grounded me—albeit quietly—all my purple life. Glam rockers had deep necklines and eyeshadow but it often seemed like a costume, like they were trying to look like rock stars. Little Richard was before my time, and his androgyny and era lacked Prince’s sexual daring and MTV platform. Cobain wore eyeliner but felt like a reaction, a semiotic statement. On Prince it was natural. Even if controversial, it wasn’t a stunt.

I couldn’t articulate it at the time, but that visual example of born-this-way norm-breaking laid the groundwork for my adult life. In a redneck place where scarves were considered effeminate and gay-bashing a yet-unnamed danger, this doe-eyed man in ruffles was a pretty conceptual explosion. Nefertiti, Pharaoh, look however U want—look at Prince. Today, with "They" as the American Dialect Society’s 2016 Word of the Year, the royal-he who declared himself a gender-bending symbol in 1993 was obviously a visionary, clearing the way for the progress we build on today.

Prince was beautiful and small. 5’2” without shoes, he was short for any gender. Obviously this didn’t affect his surety, his larger than life presence, cultivated or inborn. A small girl who internalized ideas of feminine weakness, I saw Prince as living proof that physical parameters—of gender, of size, of biology—aren’t limitations. It wouldn’t sound cheesy were he singing it: it’s possible for all of us to live, enjoy, and celebrate our bodies, work though it may be. Art helps in that endeavor; especially music, when it comes to movement.

Not only did Prince teach me that could you look however you wanted, he also made it drippingly clear that you could be as sexual as you wanted, a familiar yet revolutionary notion for everyone, especially women. Long before slut-shaming was common vernacular, Prince was the dirty patron saint—the Pope, really—of sex positivity. In the universe of Prince, not only is it okay to be sexual, it’s a given. Beautiful, writhing, wounded, and ultimately, human. Free to self-define and stay up past dawn, everything becomes naturalized, accepted, celebrated. If you can give yourself permission to look however you want and have as much sex as you want, the anxiety of orientation is next to dissolve. The message of so many Prince songs is the same: love is love.

Of course there were other such figures. As poet Mark Bibbins put it, David Bowie was the original It Gets Better video. But there was an otherness and otherworldliness to Bowie. He was a Star Man, a myth, where Prince gave Pan an earthly run for his money. Bowie’s Nietzsche-infused lyrics could be difficult for listeners to parse; Prince’s were as direct as possible, and no less existential or confrontational: I want you. Do Me, Baby.

Bowie was also a Brit, imbued with that across-the-pond glamour. Prince was from Minnesota. That fact said to all of those not from cosmopolitan cultural center, especially the queers: hell yes, you can play too! Minnesota was almost as nowhere as my hometown. For Prince to be himself, that self, from the waters of Lake Minnetonka—it meant that it could be okay. It gets better. We can make it better.

In a culture still grappling with accepting bodies at the most basic level, Prince not only looked and sang and preached the part. There was the way he moved, a kind of prowl that played every role daring us to dance, to dig, to get free. Some people have moods, personas, performances. Prince was a coil, an erotic livewire, and one for the ages. Decades after that radio shocker, I no longer understand man and woman as an either/or binary. I used to work Prince into a theory that everyone is bisexual—whoever you are, if you aren’t attracted to Prince, you must be lying. How could anyone not be drawn to such visceral, unabashed sinew? If you can watch “Purple Rain” and not squirm, well, that’s your problem. He tapped into an essential libido and invited us for a drink and I for one will be forever grateful.

Meet me in another world, space and joy,
vous etes tres belle, mama, girls and boys.

We can appreciate his music to the extent of our knowledge and taste but Prince had a prowess at life that we can all draw from, regardless of demographics. “All of my hang ups are gone/how I wish u felt the same.” A constant source of almost spiritual encouragement in a time of civil rights activism and bodily coming-to-terms, Prince spoke to and for the glorious animal in all of us, whether we listened or not.

K.T. Billey is an arts and culture writer, educator, and poet. Originally from rural Alberta, Canada, her poetry collection "Vulgar Mechanics" is a current finalist for the Fordham Lincoln Center Poets Out Loud Prize. An Assistant Editor for Asymptote, she was recently featured in Lambda Literary’s Poetry Spotlight. See more at ktbilley.com.