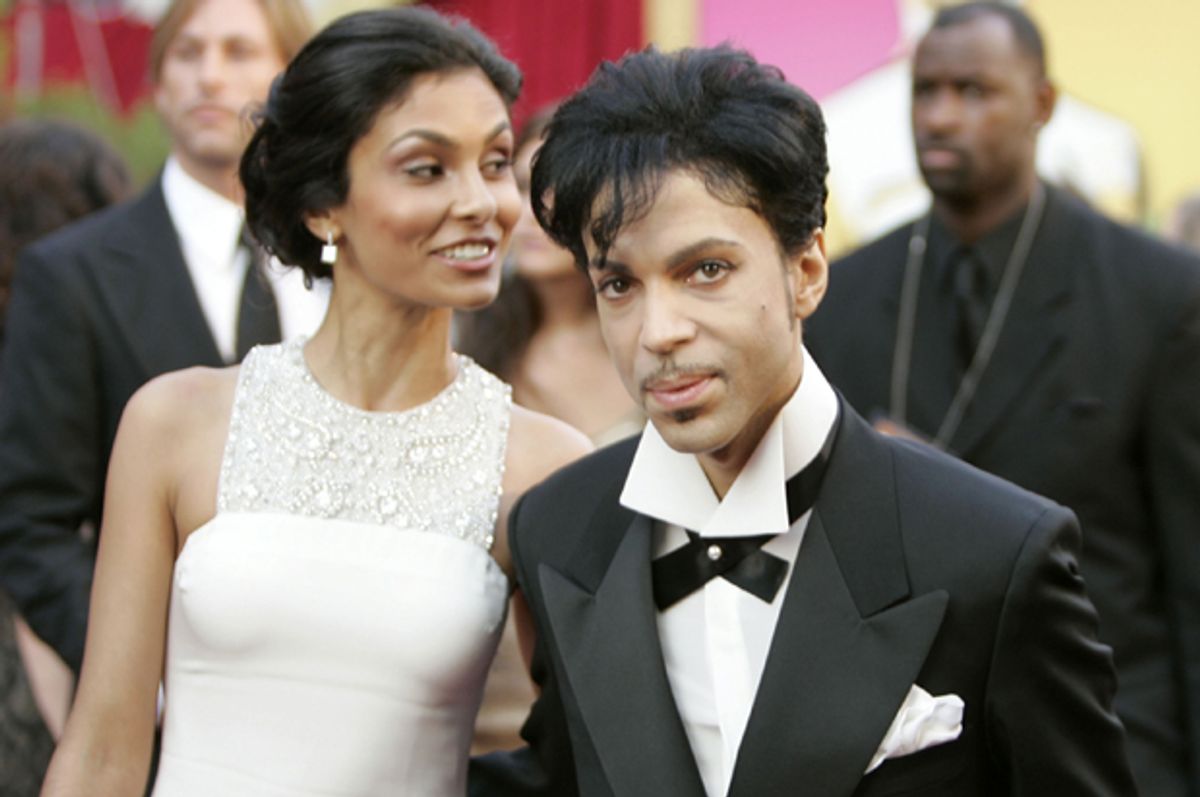 Upon hearing about Prince's sudden death at age 57 on Thursday, most everyone is latching onto a memory of the first time you realized that he wasn't your everyday pop star. For me: It must have been right before or in the early months of my freshman year of high school when the video for "Gett Off," off Prince's 13th studio album "Diamonds and Pearls", was released. While the timing is vague, my memories of watching it on MTV with my girl friends are etched into stone. We were utterly transfixed by the video, which told a story of two young women, calling themselves "Diamond" and "Pearl,"  showing up at a raunchy dance party that is clearly meant to be an orgy.

The video was filthy (probably seems tame by today's standards) and we could not stop talking about how crazy it was. But while we didn't have the vocabulary to articulate it then, it's clear to me now that one of the reasons that video was so mind-blowing was that it, and the song lyrics that accompanied it, weren't just about sex. Hell, most pop songs are about sex on some level.

No, what made the video and the song seem so subversive was that the women, both in the video and whoever is being sung about in the lyrics, were very sexual, but not objectified, like they are in most pop songs. They have autonomy and desires they aren't afraid to articulate. And this wasn't portrayed as scary or intimidating, but desirable.

In the years after that, I became a huge Prince fan and found that he had a certain zeal for songs about women who know what they want and are not afraid to get it. His (mostly) unabashed enthusiasm for the bold woman was fun, enlightening, and, dare I say, feminist. Madonna tried, but her generic, bland lyrics about expressing yourself and justifying your love just never quite had the impact of Prince's countless songs about ladies who express themselves, often at length and with detail that made the listener assume these must be real people because you can't make this shit up. Whether real or not, however, they felt real. Which meant that their autonomy felt possible, something that you the listener, living in your repressed little nowhere community (well, at least for me), could aspire to be someone a little less afraid.

With that in mind, some of my favorite examples. Sadly, no links, because Prince was so intent on keeping his music offline.

1) "Gett Off" The second verse of this song describes Prince speaking about a "Vanessa Bet", a friend he has in common with the object of his affections, who tells him of "a fantasy/That got her all wet." Which is, "Something about a little box with a/Mirror and a tongue inside." See, I told you he was specific.

For 14-year-old me, this was all a revelation: That you not only could have weird sexual fantasies, but you could talk about them with your friends, and everyone would be cool with that. That, with the right guy, this is not repulsive, but fun.

2) "Raspberry Beret" Did Prince lose his virginity to a charming young hipster who visited a "five-and-dime" that he worked in as a young man? I have no idea, but he sings this story with such conviction, I want to believe it is true. Also, if you have ever been to Minneapolis, it is literally the easiest thing in the world to imagine someone living there who is like main character of this song, a raspberry beret-wearing college girl who picks up guys she meets in thrift stores and takes them to some farmhouse she knows offers privacy for some open air sexytimes. She sounds awesome, and I hope wherever she is, if she is real, she feels good whenever this song comes on the radio.

3) "Shockadelica" Prince enjoyed casting himself as a hapless pawn in the hands of dominant, kinky women who would use him in their shameless sex games before throwing him to the wolves. This might be my favorite in this particular subgenre, a song about "Camille", who "got you tied with a golden rope" and won't even "let you play your guitar." (Poor Prince, sounds like torture.)

But perhaps the funniest lyrics are when he sings, "Got you in a trance/'Cause when this woman say dance you dance". Kinky sex, then mandatory dance party? No wonder "you just can't leave her alone."

4) "Little Red Corvette" The most ambiguous of his crazy-sexy-cool lady songs. On one hand, it's a classic Prince celebration of the pleasure of handing yourself over to a woman who will use you sexually however she sees fit and will not apologize for it. On the other hand, he seems a little judgmental about it, for once, whining about "all the pictures/Of the jockeys that were there before me" and chastising her with, "Honey you got to slow down." Boo! Let Little Red Corvette be herself!

But then again, he does also say, "Believe it or not/I started to worry/I wondered if I had enough class". Perhaps we are dealing with an unreliable narrator, through which Prince is commenting on the male insecurity that leads men to judge and want to tame women? You may scoff, but consider the fact that his movie, "Purple Rain," is a ham-fisted tale about a young man who will never grow up until he learns to respect women and stop trying to control women. I'm just saying. You can make the case.

5) "Darling Nikki" If you need more convincing, look no further than this song. The lyrics are a lot like "Shockedelica", in that it tells the story of a man who is entranced by a woman who enjoys taking charge, even if she is at times crossing the line into the possible sex offender territory. ("I met her in a hotel lobby/Masturbating with a magazine," two lines that led to the creation of Parental Warning labels on records.)

But in the movie "Purple Rain," this song is used to show off what a jerk the main character, The Kid, is being to his girlfriend. She just wants to be independent and chase her dreams, and he resents her for it, so he writes this song to slut-shame her in public. It works and she runs off in tears. But the moment is not a subtle one, and the audience is meant to grasp that being mean to women because they like sex is not cool. "Purple Rain": Bad acting, good concert scenes, with a shockingly prescient message about the dangerous allure of that "men's rights" wankery.

6) "When U Were Mine" Fondly remembering a lover who has rejected him, Prince wistfully sings, "U didn't even have the decency to change the sheets." It wasn't until I was in college that I understood the lyric, but when I did, it was a revelation. Adulthood could be whatever you wanted it to be.

That was the strength of Prince's song-writing. He could take what seems to be an ordinary, if perfectly written, song about heartbreak and slip into it, in almost coded language, a hilarious but still profound idea of freedom.