Stop clinging to the Founding Fathers: The Andrew Jackson/Hamilton/Tubman debate is really about honest history

Our money is a mess and so's our history. Time to honor Tubman, a real hero, and be honest about our founding myths 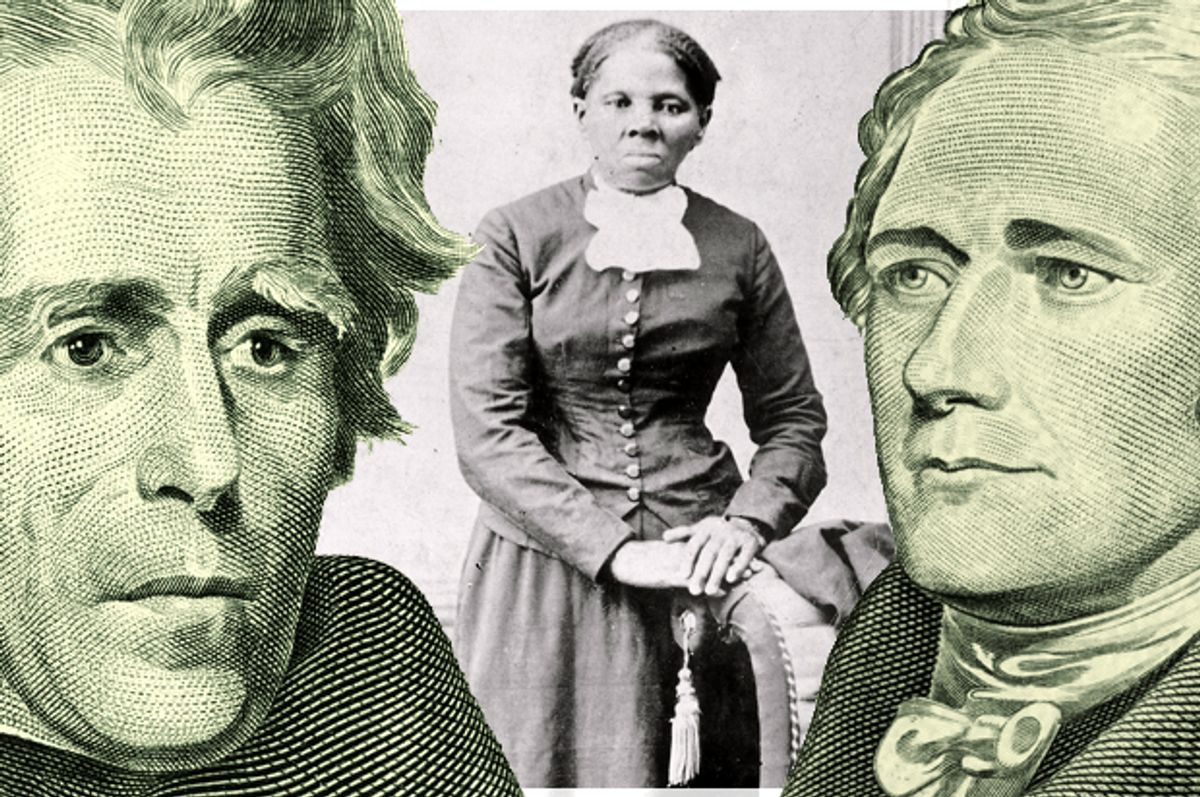 The economy may be looking up, but our money is a mess. Let’s take these things one at a time: Keeping the “son-of-a-whore” Alexander Hamilton on the ten-dollar bill makes sense, because as the first secretary of the Treasury he was proactive and innovative––though not at all the progressive or “man of the people” that the prize-winning musical would have us believe.  Putting women’s rights figures on the back of Hamilton’s ten is a mixed metaphor at best, and perhaps, in its engraved form, will come across as merely taking pity on the previously neglected––a throwaway effort to satisfy a certain constituency.

Are we to believe that Hamilton cared in the slightest about women’s rights? Or that he would have welcomed Harriet Tubman into his parlor? No. And no. The musical falsely portrays Hamilton’s beloved sister-in-law, Angelica Schuyler Church, as a feminist, and wrongly asserts that women had the vote in 1800 (well, yes, propertied women in one state, New Jersey, not New York, had been enfranchised since 1776, but it’s still misleading). The whole conversation we’re having about tens and twenties makes very little historical sense. Everyone’s talking at cross-purposes.

Compare Hamilton to Tubman. He had important wealthy patrons who advanced his career. She had none, save for those who endangered their own lives by assisting her in a great and noble cause. He handed the government over to the moneyed class. She fought for those who never had a chance in the world Hamilton helped to produce.

Harriet Tubman deserves the honor of replacing the bloodthirsty Andrew Jackson on the twenty. She was an original, a genuine American heroine, a liberator, defiant in her active opposition to the terrible inhumanity so long perpetuated through the constitutionally protected institution of slavery; she served as a Union spy in the Civil War, reporting back on opportunities to free slaves who would willingly enlist. She was nicknamed “Moses” for obvious reasons––the promised land being, for many, Canada.

For those who see this escaped slave as a foe of capitalist exploitation, and therefore an unlikely face on currency, we see instead the beauty of irony, of honoring this principled individual on a tangible symbol of twenty-first-century America’s renewed desire to reach toward greater fairness in matters of financial well-being.

The intemperate Andrew Jackson, an unapologetic slaveholder, hated banks, anyway. He campaigned for re-election in 1832 on an ill-considered all-out “war” on the national bank, without studying the full implications. If we were to feature financial wizards on currency, our choice would definitely be the thoughtful, practical, Swiss-born Albert Gallatin, treasury secretary under Jefferson and Madison, successful U.S. diplomat, and New York banker. His statue outside the Treasury Building, next door to the White House, is rarely remarked upon. Unheralded except among historians of the early republic, the Genevan was a champion of the “little guy,” a great supporter of public education, strongly in favor of reducing the national debt, and yet he was pilloried by Hamiltonian elitists and denied a U.S. Senate seat owing to his “foreignness” (he spoke with a pronounced French accent). The historian Henry Adams, descendant of a famous family of statesmen, adored Gallatin, and wished to keep his legacy alive. But historical amnesia being what it is, the twentieth century could only remember a handful of designated founders. So, if we’re looking to remedy anti-immigrant bigotry in a symbolic gesture, keep the clear-headed patriotic Albert Gallatin in mind.

There’s a point beyond the tongue-in-cheek effect in bringing up Gallatin: he’s not controversial in the least in the modern historical imagination. But in the Hamilton-Jefferson-Jackson era, he was exceedingly controversial. We should bear that in mind as the liberal versus conservative fight over keeping or displacing the traditional statuesque patriarchs from U.S. currency drags on. Ultimately, the question we face is how important an honest encounter with history is, versus how needful some will always be to cling to the rule of the patriarchs, to our long-dominant national mythology that consecrates the singularity of founder genius. Yes, clinging––intended in the same sense as then-candidate Barack Obama was unintendedly captured speaking of conservatives clinging to their guns and religion.

The relationship of money to civil religion is problematic to begin with: The founders are seen as having ushered in the American Dream along with their intention of forming “a more perfect Union.” So, it behooves us to acknowledge that as much as our Union remains deeply divided, the Dream they dreamt remains unfulfilled. We cannot have either Union or the Dream without the moral knowledge that comes from resisting the perpetuation of historical falsehoods.

Right now we have before our gaze an adoring Broadway portrait of who we might wish the historical Hamilton was; but the musical only really gives us a different (visually entertaining, but purely manufactured) image that only seems an improvement over the traditional (frozen in marble) one. It’s not only Hamilton, of course. We are taught poorly: if we study our politicians of yore as complex people, their transcendence of self-interest turns out to be far more imagined than real.

The Hamilton musical is about the old-fashioned American Dream, the immigrant-makes-good one we want to believe in, regardless of countervailing evidence. The Tubman twenty offers a different message. Her underground railroad said to slaves: “Here’s the way out of this wretched country that oppresses you––here’s to the Canadian Dream.”