Progressives are right and Hillary Clinton is wrong on trade. So why do we run away from a winning hand? 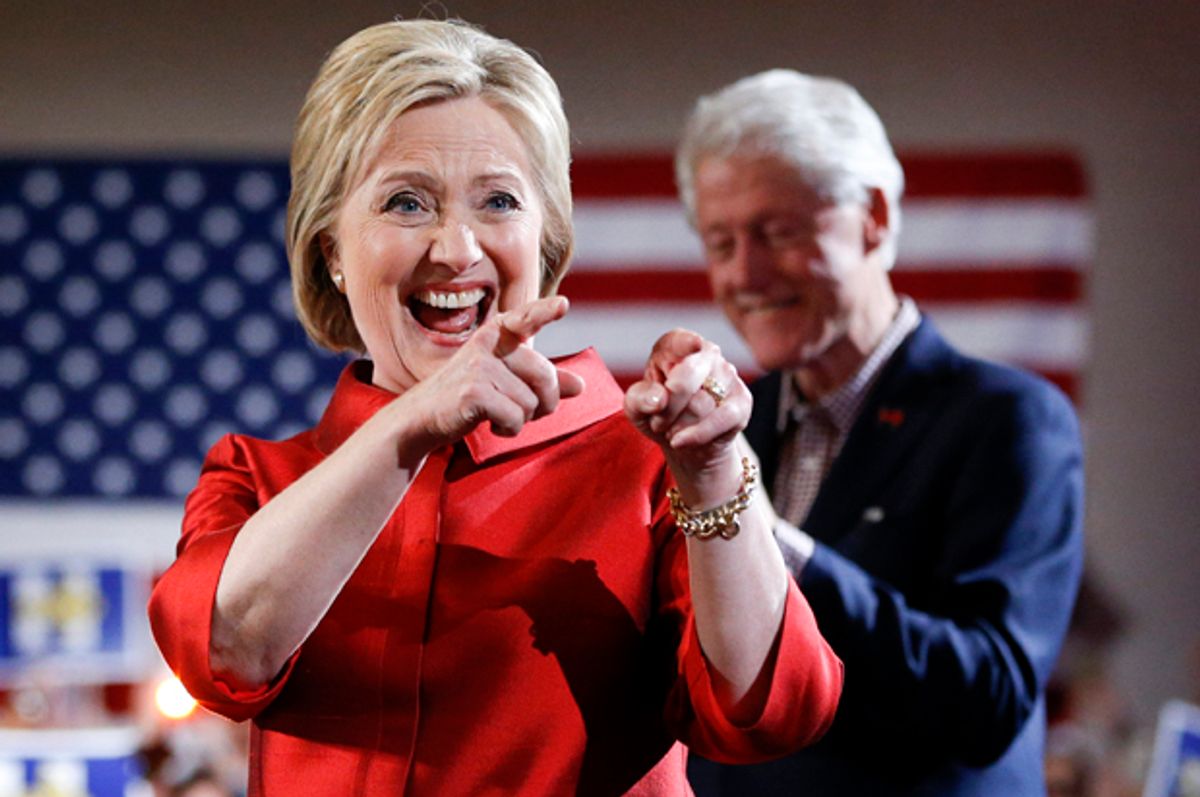 As the Democratic primary heated up to the boiling point, one particular line of attack on Bernie Sanders had the distinctively Karl Rove-ian stench of attacking Sanders’ strength. Vox, Slate and AEI all bought the spin and struck the same theme: "If Bernie Sanders cares about poor people, how come he doesn't want to trade with them?"

But even more than Rove, we can catch a distinctive whiff of Thatcherism here: There is no alternative; either we do trade on neoliberal terms or else we head back to caveman status. We can’t do things in a more equitable manner, we’re being told, even though history repeatedly shows that we can—replacing monarchy with democracy, abolishing slavery, getting rid of child labor, establishing equal rights for women. All these equalizing advances we’ve come to take for granted were unthinkable once: there was simply no alternative… or, again, so we were told.

Economist Dean Baker debunked the underlying argument on his “Beat the Press” blog as the attack on Sanders first appeared, and elaborated his critique more fully in a piece solicited by the Washington Post—which then declined to run it. Baker first noted that conventional economic theory calls for rich countries to run surpluses with developing countries—supplying the capital they need to develop—and that this pattern prevailed throughout most of the 1990s. “The United States had a modest trade deficit in these years, but Europe and Japan had large surpluses,” Baker recalled, but “This pattern was reversed in 1997 with the U.S.-I.M.F.'s bailout from the East Asian financial crisis.”

That bailout, “directed by the Clinton Treasury department and the I.M.F.,” came with very harsh terms, which led developing countries to decide they had to keep large foreign exchange reserves—meaning U.S. dollars—in order to avoid a similar fate. This in turn required running large trade surpluses, the exact opposite of what conventional, textbook economic thinking had previously assumed. “This was the period in which the U.S. trade deficit exploded, going from just over 1 percent of GDP in 1996 to almost 6 percent of GDP in 2005, a rise in the size of the annual deficit equivalent to almost $900 billion in today’s economy,” Baker noted. “This rise in the trade deficit coincided with the loss of more than 3 million manufacturing jobs, roughly 20 percent of employment in the sector.”

But it’s not just that American factory workers were sold out. At the same time, professionals (the same class of people who tell us it’s inevitable) were carefully protected. “The arguments on gains from trade are the same with doctors as with textiles and steel,” Baker noted. “The reason that we import manufacturing goods and not doctors is that we designed the rules of trade that way.” Those rules made it easy to off-shore jobs, but retained obstacles to foreign professionals moving here to work. “The reason is simple,” Baker pointed out: “doctors have more political power than autoworkers.”

Pharmaceutical companies have even greater power, so “free trade” deals have now come to increase protections for them, along with other patent and copyright protections, imposing a huge financial burden on the developing world—not to mention the cost in lives. “Generic drugs are almost invariably cheap; patent protection is what make drugs expensive,” Baker noted.

“In sum, the recent pattern of trade and development is anything but natural. It was imposed on developing countries by the United States and other rich countries. It is just not true that it is their only path to development.”

Indeed, Baker’s think tank, the Center for Economic Policy and Research, provides a couple of additional ways of seeing through the smokescreen, first by examining the real impacts of NAFTA  on Mexico, a case study of the grand-daddy of these sorts of deals; and second by examining worldwide data on how rates of development changed over time, which shows a marked slowdown when the neoliberal orthodoxy hit its peak. Both deserve to be more widely known.

In 2014, CEPR’s report on NAFTA’s 20-year record found that not only has NAFTA hurt American workers, it’s also hurt Mexico as well, particularly in contrast to its past development, and to other Latin American countries:

Thus, if NAFTA is a model of how “free trade” helps the world’s poor, it’s a record of abject failure. In addition to everything else, the report found that NAFTA devastated Mexican family farmers, which in turn was a major factor driving undocumented immigration:

The second sort of debunking evidence comes from CEPR’s series of “scorecard” reports examining how developing economies were doing in comparison to the decades 1960-1980. The first such scorecard in 2001 reported “a very clear decline in progress as compared with the period 1960-1980.” (Two subsequent reports found improvements after 2000, as the neoliberal consensus was increasingly challenged. More on that below.) The reports looked at indicators including the growth of income per person; life expectancy; mortality among infants, children, and adults; literacy; and education. For each indicator, countries were divided into five roughly equal groups, based on the countries' level at the start of the period (1960 or 1980 in the first report). Thus individual countries were not compared across time periods; rather, groups of countries at similar stages of development were compared.

Growth rates fell for all groups. Most strikingly, “The poorest group went from a per capita GDP growth rate of 1.9 percent annually in 1960-80, to a decline of 0.5 percent per year (1980-2000).”  In addition, “For the middle group (which includes mostly poor countries), there was a sharp decline from an annual per capita growth rate of 3.6 percent to just less than 1 percent. Over a 20-year period, this represents the difference between doubling income per person, versus increasing it by just 21 percent.”

The record with other indicators was generally negative as well. “Progress in life expectancy was also reduced for 4 out of the 5 groups,” while the growth rate of education spending--as a share of GDP--slowed for all groups, and educational results suffered as well. “By almost every measure of education, including literacy rates, the middle and poorer performing groups saw less rapid progress in the period of globalization than in the prior two decades.”

Changes during this period reflected widespread adoption of policies identified with  globalization: the removal of tariff and non-tariff trade barriers, along with restrictions on international investment, and so-called “structural adjustment policies” imposed by the World Bank and the International Monetary Fund on borrowing countries, including “contractionary monetary policies (higher interest rates and tighter credit), public spending cuts, privatization of public enterprises, increasing foreign reserve requirements, and a long list of 'micro-interventions' ranging from user fees for primary education and health care to removing various government subsidies.”

CEPR did not claim the evidence proved that these policies were to blame. “But it does present a very strong prima facie case that some structural and policy changes implemented during the last two decades are at least partly responsible for these declines. And there is certainly no evidence in these data that the policies associated with globalization have improved outcomes for most low to middle-income countries.”

The next two scorecard reports appeared in 2005 and 2011. By the time of the third one, there was enough data to declare that “The past decade has shown a rebound in economic growth as well as progress on social indicators for many countries.” More precisely, “For all except the top quintile of countries – i.e., for the vast majority of low- and middle-income countries, there was a sharp rebound to the growth rates of the 1960-1980 period during 2000-2010.” Health and education indicators also recovered, though a bit more unevenly.

This resumption of progress is welcome news, of course. But it does not represent a magical explosion of progress beyond the rates of the past in the pre-globalization era; it is a merely a return to those rates [chart]. Hence, the underlying broad point remains: There is no simple story of free trade producing global prosperity and lifting the world’s poor. It’s a complicated story of global development, with a lot of moving parts, and the one thing that is quite clear is that simplistic free trade ideology—which dominated development in the 1980s and ’90s—is not the way to go.

But if free trade orthodoxy is not the answer for the world’s poor that Sanders’ critics take it to be, what is the alternative? It may be complicated, but surely some sort of guidance is possible. And, of course, it is.

As I’ve pointed out here recently [with more detail here], only a robust welfare state can effectively fight against systemic poverty, even in affluent countries. Which is all the more reason for developing countries to have them as well, as many millions of their citizens have long believed. This is the alternative that those attacking Sanders don't want anyone to be thinking about. And it's not just an idle thought. On several occasions, Sanders has cited the coups against Jacobo Arbenz in Guatemala and Salvador Allende in Chile as classic examples of mistaken U.S. foreign policy. Both these coups were mounted in part to destroy the threat of model welfare states being established in Latin America—something that was only a threat because people wanted it, and it could work. But to Sanders, that wasn’t a threat—it was an opportunity, an opportunity for whole countries to develop in a democratically self-determined manner, placing themselves on the same sort of path that countries like Denmark and Sweden have taken to virtually eliminate poverty.

Thus, there is a broad underlying consistency to Sanders' vision—from expanding the welfare state to a collaborative foreign policy and fair trade policies—which combines to present a clear alternative to the tunnel-vision framework of those attacking him. Of course, you can say that Sanders is powerless to bring this alternative about. Even as president, he couldn’t do anything to promote welfare states in developing nations—or could he? He could certainly stop making it harder.

But above all, this is where Sanders’ call for a political revolution comes in. Because the alternative he points to is precisely the opposite of a top-down, heroic one-person creation. And the fact that it both appeals and applies across international borders is what makes it so much of a vision for the future, not—as some would have it—a relic of the past. It is, in a profound sense, precisely the same vision that drove the Arab Spring, along with similar movements in Spain, Greece and elsewhere. Once again, America has the opportunity to decide what side of world history it will be on. Will we cling to the lie that we have no alternative? Or will we commit ourselves to another historic equalizing advance?