It's so much worse than just Paul Ryan vs Nancy Pelosi: This is why Congress is a disaster

Congress is an absolute mess—thanks, primarily, to the way members of Congress are wired to approach their jobs 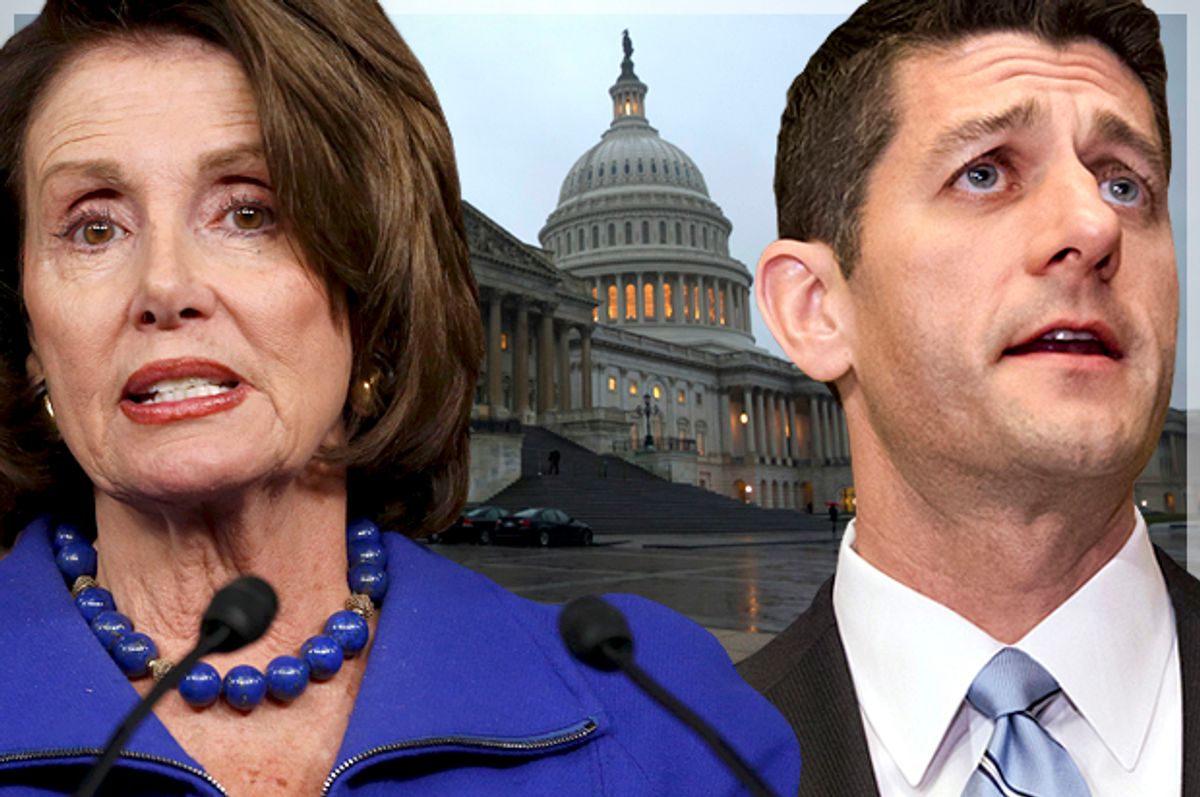 Excerpted from "Relic: How Our Constitution Undermines Effective Government--and Why We Need a More Powerful Presidency"

Congress can’t be anything we want it to be. It is a constitutionally engineered institution, programmed to have certain features and behave in certain ways within the larger separation-of-powers system. Since the founding, the nation has been stuck with this increasingly archaic creation. To be sure, Congress has changed over the last two hundred years. It is no longer the dominion of party machines and spoils but a realm of entrepreneurial politicians with their own campaign organizations, their own support coalitions, their own sources of money. The fundamentals, however, have not changed. They are still there, ingrained in Congress’s institutional genetics—and creating profound problems for the rest of American government.

These genetics are too often overlooked. Outside of academia, almost everyone who pays attention to Congress, and indeed to politics generally, tends to focus on the people involved—on John Boehner squaring off against Nancy Pelosi or Ted Cruz squaring off against everyone else. However natural this focus on newsworthy personalities may be, it is way off the mark. And misleading. The fact is, the specific people who make up Congress really don’t matter all that much in the grand scheme of things. Get rid of the current crew of personalities and bring back that titan of the House, Tip O’Neill. Or another, Sam Rayburn. Or Wilbur Mills. Anybody you like. Or replace every single legislator with someone new. They will all be members of Congress, and they will all have their incentives and behavior shaped in very distinctive, common ways by the constitutionally prescribed nature of the institution (and its semi-prescribed electoral system). The people that make up Congress are easily observed. The structure that shapes their behavior is not. Yet it is precisely this structure that is fundamental.

A key to understanding Congress lies in recognizing that there are certain structural commonalities that explain why members do what they do, and thus what we can expect from them. Needless to say, these commonalities will not explain 100 percent of each member’s behavior 100 percent of the time, but they do capture central tendencies—and those tendencies explain a lot of what happens in Congress. They get to the behavioral core of the institution. Three themes stand out.

Members of Congress are parochial. We’ve said it many times before, and we’ll keep saying it. Congress is filled with political entrepreneurs, and they are constantly concerned about their own political welfare—which is rooted in the special interests, constituencies, and ideological support bases within their districts and states that make their reelections possible. It is no accident that Congress is awash in interest groups. All districts and states are inevitably made up of countless special interests; some, like banking or soybeans or automaking, vary enormously across districts while others, like senior citizens or veterans, are more evenly distributed—and members of Congress are wholly open to their lobbying activities and (selectively) responsive to their concerns and demands. The electoral connection is a two-way street: special interests seek influence while members of Congress seek popularity by being of service. It is also no accident that Congress is awash in money. This has always been true, but it is now true in the extreme thanks to recent Supreme Court decisions that have eviscerated campaign finance regulations. Members run their own campaigns and have an insatiable need for ever-greater sums to fill their electoral war chests, and the contributors are often key players who want special access in return. Again, it’s a two-way street. For the most part, this is not a matter of corruption per se. The United States arguably has one of the cleanest political systems in the world (as political systems go). Such relationships are better understood in terms of mutuality of interest: a mutuality that favors rampant special-interest politics.

To say that members of Congress are parochial is not to say that they are a bunch of country bumpkins. On the contrary, members of Congress tend to be quite cosmopolitan and well educated—many have given up prestigious, lucrative jobs as lawyers, doctors, and businesspeople in order to serve—and they are highly adept at doing what needs to be done to bolster and secure their local support. Theirs is an extraordinarily sophisticated parochialism. In office, they run complex media-relations operations that communicate with the press about pending legislation and advertise their achievements back home. With permanent support staff in both DC and their home districts, they shuttle back and forth for visits with key constituencies, interest groups, lobbying organizations, and fellow politicians. They work doggedly to secure set-asides of one kind or another—disaster relief, special contracts, earmarks, and other distributive outlays—for key companies and industries back home. They navigate a complex committee system that allows them to channel their professional ambitions by focusing on the bills that matter most to their constituents. Their résumés are impressive, their schedules are packed, and their operations are professional. They are high-performing reelection machines.

Members of Congress can be parochial, moreover, and still be ideological and have genuine interest in national and international issues. Their electoral fortunes may be tied, in part, to national economic trends, the president who sits in office, and national media. Crises, particularly wars, may increase the salience of national considerations. In certain policy domains, notably those that are not especially salient for their constituents, members may have greater discretion in how they vote. And to fund their campaigns, members may call upon national interest groups and the goodwill of their fellow congressmen.

Members are not exclusively parochial. But they are strongly influenced by parochial concerns. Nationalizing events and forces constitute deviations from a baseline that anchors them in localistic calculations and constraints. Their ideologies—which may seem to reflect broad political worldviews—must be in tune with their home-base ideological support constituencies, either because they are chosen on that basis or because they make ideological adjustments to bring themselves into local alignment. At every turn, they evaluate policy according to its local implications. They distribute their time and resources according to the demands of powerful interests from their districts and states. And nearly every word they say in every speech they give is drafted with an eye toward how it will play back home.

It is of no small relevance that, despite all the nationalizing forces of modern politics, members of Congress have increased the percentages of their own staff members working in their local offices rather than on Capitol Hill. In the Senate, the percentage of the senators’ personal staff working in local offices rose from 25 percent in 1980 to 41 percent in 2010. In the House, the comparable figures were 34 percent and 49 percent. As these measures clearly suggest, members have hardly moved to distance themselves from parochial concerns over recent decades. They are tied to their states and districts. These are their political lifelines—and they invest their resources accordingly.

Members of Congress are myopic. In addition to being parochial, legislators approach policy issues in shortsighted ways rather than being centrally concerned about the long-term consequences—or genuine effectiveness. House members are constantly running for reelection and are thus worried about the immediate impact of their decisions on constituents and interest groups. Senators have somewhat longer terms in office, but much the same is true for them. Among other things, members of Congress have strong incentives to fashion policies that provide current supporters with valuable up-front benefits, and they have strong incentives to push costs off into the future. This is why budget deficits, borrowing, and debt are so politically attractive—and such problems for the nation. It is also why Social Security and Medicare, the nation’s two most expensive policy programs, are financial train wrecks waiting to happen: Congress is great at doling out benefits but terrible at requiring people to pay for them. These and other myopic pathologies are reinforced by the fact that, with 535 voting members in two chambers, individual legislators are not held responsible for the effectiveness of public policies, and there are no political consequences for them if policies turn out to be ineffective ten or twenty or thirty years down the road. Indeed, the incentives for members of Congress can actually work the other way around: if a policy turns out to be ineffective or even harmful, constituents can complain to their legislators, and legislators can get credit for riding to the rescue. As Morris Fiorina argued in his classic work Congress: The Keystone of the Washington Establishment, members of Congress can actually benefit when policies don’t work.

Members of Congress think about the pieces, not the whole. This is an implication of their parochialism and myopia, really, but it’s so important that it deserves separate emphasis. Members of Congress approach their policy decisions in a piecemeal fashion, focusing on just the policy in question—and the interest groups and constituents that want it—and not on how it fits into the nation’s larger framework of policies, agencies, and governance. That is why, for example, a 2009 GAO report found that the government had forty-seven different worker-training programs run by nine different federal agencies. Or why another study uncovered 82 programs to improve teacher quality, 160 to support housing, and 53 to promote entrepreneurship. Congress has devised no overarching, coherent national policy on worker training, teacher quality, housing, or entrepreneurship. Instead, it has produced a confusing, uncoordinated array of different programs adopted at different times for different reasons in response to different groups. Policies—and government—are constructed piecemeal, without any regard for crafting a well-functioning, rationally put-together whole. The same is true when Congress creates government agencies, assigns them missions, and locates them somewhere in the scheme of government. Upon its creation in 1964, for example, the food stamp program was handed over to the Department of Agriculture rather than the Department of Health, Education, and Welfare (now Health and Human Services)—where almost all the nation’s other social welfare programs were housed—because of a logroll aimed at getting the support of farm interests and Republicans. It has stayed there ever since, in odd and alien bureaucratic territory. There is no intellectual rhyme or reason to this sort of thing, no concern for building a coherent structure of government. The overall result is a governmental system characterized by duplication, overlap, and mismatch. It is an absolute mess—thanks, primarily, to the way members of Congress are wired to approach their jobs.

William Howell is the Sydney Stein Professor in American Politics at the University of Chicago. His The Wartime President won the William Riker award for the best book in political economy.

Terry Moe is the William Bennett Munro Professor of Political Science at Stanford University and a senior fellow at the Hoover Institution. Moe is a member of the American Academy of Arts and Sciences.