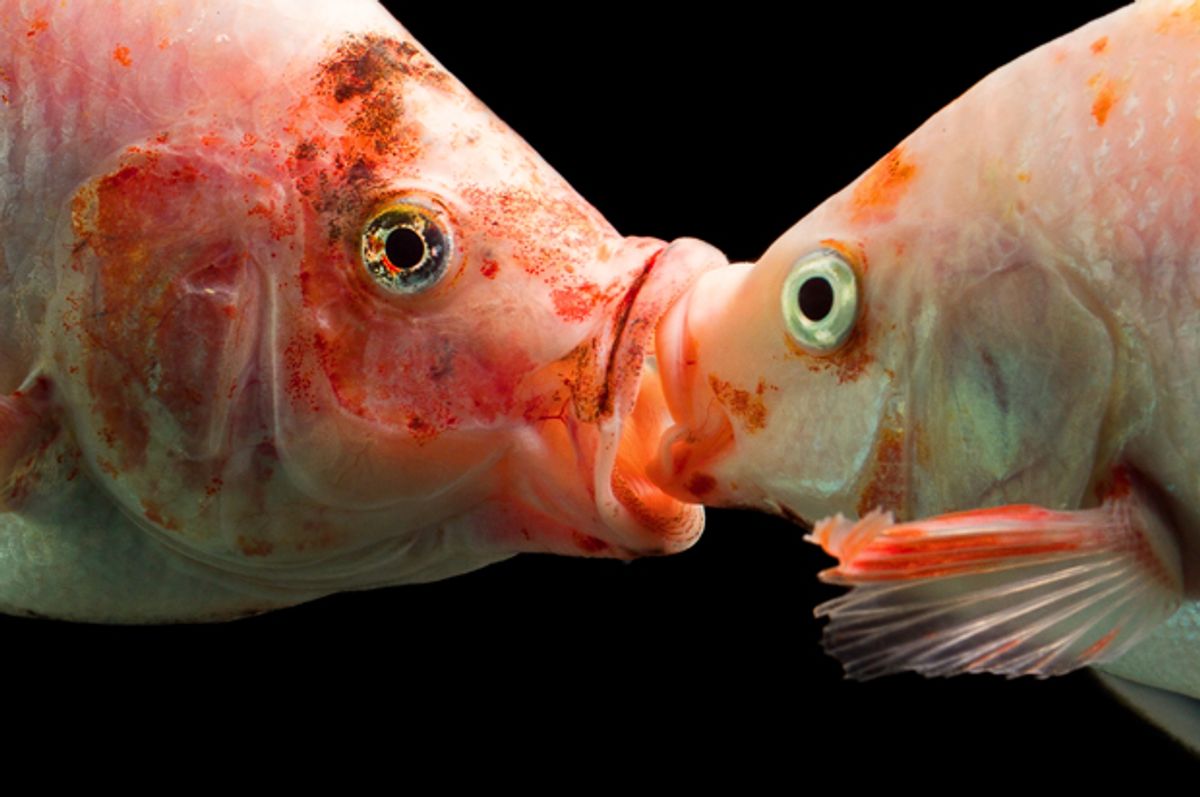 Sometimes, successful sex requires shaking things up a bit. Under the sea, it is no different — except of course that the techniques there have been perfected over millennia. Sex was invented in the ocean — that’s where Nature’s been practicing her sexual prowess the longest.

Here are a few salty tales and tips from our watery cousins on the tried and tested dating and mating games that drive diversity and abundance in the largest habitat on the planet. Take (and leave) what you will.

Such sexual synchrony is key in the ocean, where often sex is an out-of-body experience. Similar to trees casting pollen to the wind, many ocean animals release their reproductive goods directly into the sea. Such external fertilization—where sperm and eggs mix and mingle in the salty brine—presents a significant challenge:

How do tiny eggs and miniscule sperm find one another across all that open space?

When many individuals get together for some sexy businesses, they can better coordinate their spawning through sultry dance moves, flashing colors, or other forms of wooing. The result is millions and even billions of sperm and eggs released all at once in a relatively small area of ocean. This increases the odds that the little wigglers will find eggs before either are swept off by currents (or chowed upon by predators).

To make it work, tens of thousands of individuals, many traveling for days, must all descend upon one chosen location, at the exact same time, and then jettison their wares within moments of one another. It is no easy feat. Just consider the last time you and your one partner managed synchronized bliss — and we’re talking thousands of individuals.

Get your Barry White on

Want to lure in the ladies (or intimidate the competition)? Nothing says “I’m a sex machine” like a deep, booming baritone. Take it from the largest guys on earth: the male blue whales. Since the 1960s, these behemoths have increasingly embraced their inner Barry White, and that's likely a sign that seduction is on the rise in this highly endangered species.

Nearly hunted to extinction in the mid 20th century, blue whales looking for a date had to search entire ocean basins for mates that were few and far between. Back then, a male was concerned with simply finding a female, forget about seducing her. He just sang as loudly as possible. But the moratorium on hunting whales has reversed declines in the population and as their numbers have climbed, the males’ songs have dropped—by over 30 percent in pitch the past four decades.

With more blue whales around, the distance between males and females, and between males, is shorter. Now, rather than singing simply to advertise their existence, males are likely singing to show off their wares.

A lot can be said with a song. Across the animal kingdom, bigger males are able to sing louder and lower than smaller males. It’s just physics. And in the wild, bigger is often better when it comes to selecting a male, so females tend to go for the males who can hit that lower register.

Deeper is sexier when it comes to a male’s voice—be it a koala, human, or blue whale.

Try a change in atmosphere

Get out of a sexual rut with a little S & M. This could be the motto of grunion, slender silver fish that flap ashore the beaches of southern California every spring for some rather risqué sex on the beach.

Leaving the sea on the high tides of the full and new moons, female grunion burrow up to their heads in the moist sand. Bound and prostrate, their glistening bodies lure in half a dozen or more male lovers, who arrive on the following waves. They wrap themselves around the female’s protruding torso and use her side as a slippery slide for their pleasure. Fish out of water, the participants must perform the entire sexual act while holding their breath. It’s a love affair replete with beach sand bondage and a bit of asphyxiation.

Once released of their reproductive burden, the males quickly relinquish their hold and flop back to the sea. Chivalry long gone, the female must dig herself free and make it back to the water before passing out.

The rather racy soiree has its purpose: several inches below the sand, in a pit dug out by the female’s tail, sperm and eggs swirl together. Two weeks later, the return of the highest tide washes free the fertilized eggs to return to the sea.

Look out for fatherhood phonies

Sometimes, you just have to fake it.

That’s the approach of the peacock wrasse, a cigar-shaped Caribbean reef fish that has no scruples when it comes to seduction.

Females in this species cruise the reef looking for males with a suitable crib in which to lay their eggs. What defines the best nests? Eggs, of course. The presence of other eggs signals to a female that: 1) another female found this nest worthy; 2) the male is less like to ditch the nest as he has a big investment already; and 3) the male can successfully guard eggs from predators.

But not all males take the time and effort to build their own nests. Instead, some big thug males choose to chase out smaller, scrawnier males from their well-kept nests and pretend that this fancy, full-of-eggs nest is their own. The ruse often works, with approaching females happily adding their eggs to the mix, which the thief male then fertilizes.

But these bully males take the faking fatherhood scam even one step further. Having filled the nest, these con artists then ditch out to go take over another one. They abandon their own eggs without fear because they know, waiting in the wings, is the original dad—the true owner of the nest. With no way to tell the difference among eggs, the dutiful dad returns, and rears ’em all to hatching.

In the world of lobster sex, nothing says “let’s get it on” like peeing in your lover’s face.

For Maine lobsters, sex is a tender affair that follows about two weeks of rather kinky foreplay. A female will subdue an otherwise bullish male by visiting his den each day and dosing him with a healthy spray of her best urine. After a few days of this, the normally aggressive male transforms into a gentle lover, welcoming this seductress female into his den. There, for the next several days, they will cohabitate. There’s lots of heavy petting with antennae, continued mutual golden showers, and touching one another with their spindly legs. And since lobsters have the equivalent of taste buds along their legs, they are basically licking each other with their feet. It’s kinky stuff.

Eventually, the female feels her molt coming on. This is the time where she slips out of her tattered old shell and slips into (grows) a shiny new one. And it is the ideal time for two lobsters to get it on. When the female ditches her old shell, she also tosses any stored up sperm from previous matings. Thus, a freshly molted female appears as a virgin again, empty pouch ready—and needing—to be filled by her next lover.

But sex with a big strapping male is a dangerous prospect for a recently molted female. When she crawls out of her old shell, she is a soft-bodied animal; it is several days before her new armor hardens into place. During this time she is extremely vulnerable, at the mercy of the male—a large-clawed, brutish individual with a tendency to beat up any other lobsters he sees.

And that is where her pee potion comes into play. Nearly two weeks of daily dosing puts a spell on the male that keeps him infatuated with her. After she molts, he stands guard over her, gently strokes her and eventually cradles her soft body in the hammock of his walking legs. The act itself is tender and swift. And afterwards, he will remain in the shelter alongside her until she is strong once again. With new shell solid and her sperm pouch full, she will then leave his abode…and another female will begin the golden showers anew. Maine lobsters are serial monogamists.

Dr. Marah J. Hardt is the Research Co-Director for the non-profit Future of Fish. A coral reef ecologist by training, she is a former research fellow at Blue Ocean Institute. Her articles have appeared in academic and popular media, including Scientific American, The American Prospect, Yale e360, Creation Care Magazine and Scuba Diver Magazine. Her book, "SEX IN THE SEA: Our Intimate Connection with Sex Changing Fish, Romantic Lobsters, Kinky Squid, and Other Salty Erotica of the Deep," is now out from St. Martin’s Press.