Who gets to borrow white privilege? This is what happens when an Asian-American cop kills an unarmed African-American

White cops get away with killing blacks. This is what happens when police are never punished and blacks keep dying 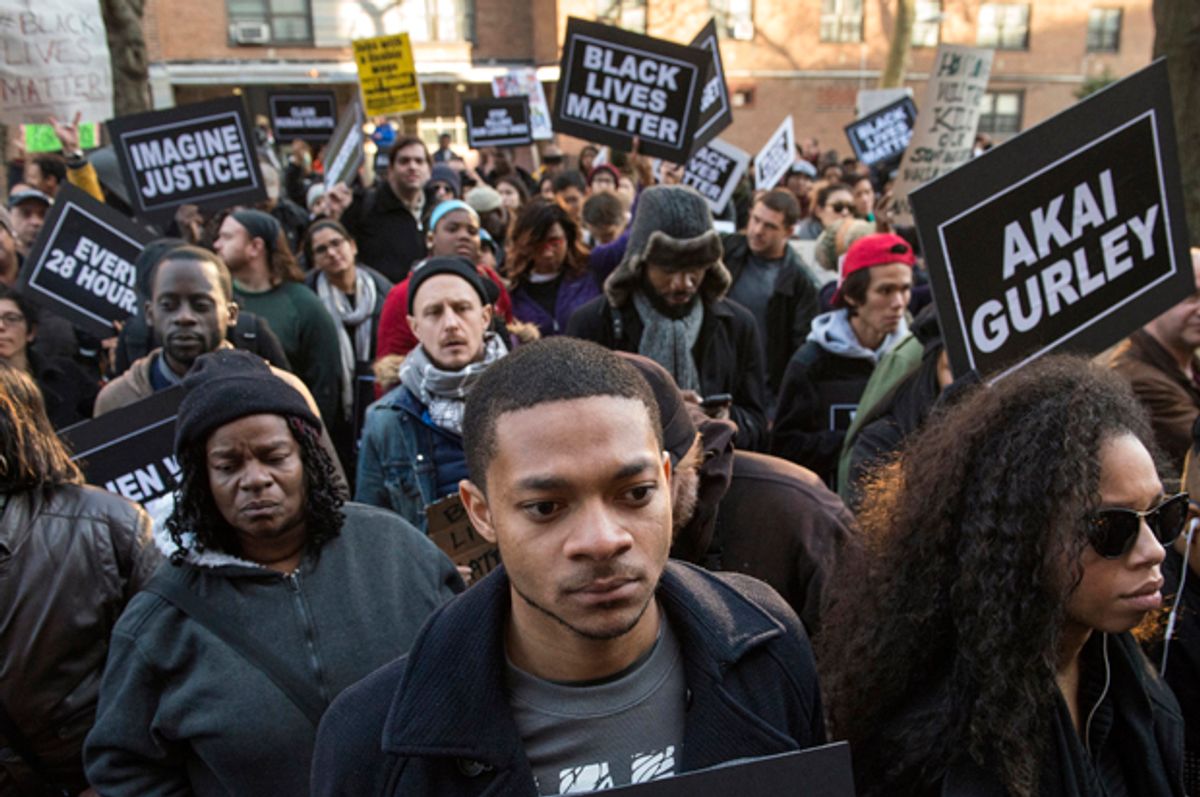 In November 2014, Peter Liang, a New York City police officer, discharged his weapon in a dark stairwell. The bullet ricocheted off of a wall before it hit Akai Gurley in his chest.

As Gurley lay on the ground bleeding to death, Peter Liang, panic stricken, was texting his union representative for guidance about how to proceed after the shooting.

Liang did not render any aid to Gurley.

Two years later, Liang would be convicted of manslaughter. In response, several thousand protesters, most of them Asian-American, gathered at a park near the Brooklyn courthouse. They were upset that Liang was being punished for killing Akai Gurley. Many of them carried signs that read “No Selective Justice” and “One Tragedy, Two Victims.”

A common sentiment uniting Peter Liang’s supporters was that he, an Asian-American, was being “unfairly” punished for killing a black man, when so many white officers had done so without suffering any negative consequences. In essence, this was a demand that justice for Liang required that a perverse and very powerful type of white privilege be fully extended to Asian-Americans as well.

As one person made the case to the New York Times:

“All the policemen have no punishment for all they did,” said Tommy Shi, 30, who lives in Manhattan and works in a restaurant. “Peter Liang is a scapegoat for all this.” He added: “That’s why we stand for Peter Liang.”

Once again, a black man has been killed by America’s out-of-control police. The black necropolis in the Age of Obama has one more body to add to its catacombs. Legal murder by an agent of the State will go (relatively) unpunished. This is but one more confirmation of how black life is cheap in America, and why the slogan “black lives matter” is both a demand on justice and power, as well as a much-needed personal and communal affirmation.

Multiple narratives about race and the color line in post-civil-rights-era America intersected in that tragic moment, when in a dark stairwell of a New York City housing project, an Asian-American cop shot to death an innocent and unarmed black man. Race is a biological fiction. It is given meaning and power by society. As such, individuals, elites and communities create “race.” Race is made by a myriad of factors and agents such as the law, politics, economics, popular culture, schools, religion, the news media and the arts. In the United States and the West, race has historically functioned as a convenient way of organizing society by assigning rights and privileges to some groups and individuals while simultaneously denying them to others. And even in an era of supposed “color blindness,” “equality” and “post-racial” politics, race and racism are a type of societal constant that positions those arbitrarily deemed “white” at the top of the socioeconomic and political hierarchy and those marked as “non-white” at various levels below them.

The social and political life of the United States has been oriented around what historians, social scientists and other scholars have described as “the black-white binary.” Whites were/are dominant and privileged; black people, first as human property, and then as “free” people, were/are positioned as subordinate and lacking the same privileges as whites. Other racial groups—Hispanics, Latinos, First Nations and Asians—are positioned relative to these two extremes. If whiteness is a type of privilege and power, and by comparison “blackness” has historically been a source of stigma and oppression, Asians and other non-whites have had to situate themselves between those two poles.

The interactions between black Americans and other people of color have created exciting, productive, rich and powerful moments of exchange and alliances. Hip-hop culture was born from these forces. The “Black and Brown Power” movements of the 1960s were a result of the political synergy created by African-Americans, Latinos, First Nations and other marginalized groups fighting for their full human rights.

These moments of contact between black Americans and East Asians, in particular, have also come with challenges, conflict, and human loss. For example, the “Mississippi Chinese” were laborers and entrepreneurs who often formed families and created a community with African-Americans under the regime of Jim and Jane Crow during the 19th and early 20th centuries. The Chinese occupied a liminal space in the Southern racial order and consequently were allowed a marginal degree of upward mobility within America’s Apartheid system. White Southern elites would eventually put an end to this arrangement. Through threats of violence and economic retaliation, many Mississippi Chinese would be forced to abandon their black children, partners, families, friends and colleagues.

During the urban uprisings in the aftermath of the Rodney King decision in 1992, Asian stores and businesses were supposedly targeted by black and brown rioters for looting and destruction. In the same era, New York City and other major American cities would also experience incidents of tension and protest between East and South Asian shopkeepers and black inner-city residents.

In total, these are conflicts between people of color about resources, jobs and political power. These are also the powerful forces that helped to create Peter Liang and Akai Gurley’s fatal encounter, and the largely divergent responses by the Asian-American and black communities to it.

Historically, becoming a police officer is one of the primary ways through which white, male ethnics have found upward class mobility in America. Being a police officer was and is secure work with great benefits. This is why the “wages of whiteness” that came with such jobs are so highly prized and protected to this day.

Police work is also one of the few jobs in America where a person without a college degree can be given a uniform, a gun and the power to commit legal murder. Policing is also political work. In the United States, America’s modern police can trace their origins to the slave patrollers of the antebellum South. The police also represent and enforce the interests of the rich and the powerful over the poor and the working classes. The law is not neutral; by implication, neither are its foot soldiers.

Thus, Peter Liang, a Chinese-American, a man who just wanted a good and secure job as a police officer, joined an organization that is part of a system--what Michelle Alexander has termed the “New Jim Crow”--which systematically discriminates against, harasses and kills black and brown people.

The relative lack of punishment for Peter Liang’s killing of Akai Gurley is not an aberration. It is a feature of a racist and classist law enforcement system that is working exactly as intended.

More than one hundred unarmed black people were killed by America’s police in 2015.

As reported by the Mapping Police Violence project, 37 percent of unarmed people killed by police in 2015 were black, despite black people being only 13 percent of the U.S. population. Unarmed black people were killed at five times the rate of unarmed whites in 2015.

The Washington Post has compiled data which demonstrates that black men are seven times more likely to be killed by police than are whites. Subsequent research has also concluded that:

“The only thing that was significant in predicting whether someone shot and killed by police was unarmed was whether or not they were black,” said Justin Nix, a criminal justice researcher at the University of Louisville and one of the report’s authors. “Crime variables did not matter in terms of predicting whether the person killed was unarmed.” In the study, researchers wrote that their analysis of the 990 fatal shootings in 2015 “suggests the police exhibit shooter bias by falsely perceiving blacks to be a greater threat than non-blacks to their safety.”

Black individuals shot and killed by police were less likely to have been attacking police officers than the white individuals fatally shot by police, the study found. “This just bolsters our confidence that there is some sort of implicit bias going on,” Nix said. “Officers are perceiving a greater threat when encountered by unarmed black citizens.”

Psychologists have conducted experiments that repeatedly demonstrate how police officers are more likely to shoot unarmed black men than they are whites.

The Federal Bureau of Investigation does not have an accurate accounting of the number of people killed by America’s police.

Investigations have revealed how police in major cities such as Chicago and New York routinely violate the rights of blacks and Latinos. Example: A recent report on the civil rights violations committed by the Chicago police determined that the latter’s "own data gives validity to the widely held belief the police have no regard for the sanctity of life when it comes to people of color."

Ultimately, the tragic death of Akai Gurley at the hands of Peter Liang is a story about how the color blue that is often worn by police officers trumps the human rights of black and brown Americans. Thus, Liang benefited from a type of honorary (however not full) whiteness that comes when people of color don a police uniform.

There is no evidence, either direct or circumstantial, that the defendant was aware of Akai Gurley’s presence and therefore disregarded any risk [to him]…

The judge said he agreed with Thompson’s no-jail recommendation because “as I watched the video of the defendant entering the lobby of the Pink Houses, I couldn’t help but feel he was entering with the serious mind of protecting the people."

“Shooting somebody never entered his mind,’’ Chun said. “I find incarceration to be unnecessary.”

This is a corrupt system protecting its own members and agents.

The outcome in the Peter Liang case also leads to a natural counterfactual and thought experiment.

What if Akai Gurley or another resident of The Pink Houses project, in fear of crime and scared to walk in a dark stairwell, pulled out a pistol, and upon being startled by the sound of a door slamming shut, accidentally discharged a weapon. The bullet then ricocheted off a wall and hit a New York City police officer, killing him. Assuming this person survived said encounter with the New York police, it is highly unlikely, if not wholly impossible, that a prosecutor or judge would have shown him or her the same mercy and leniency extended to Peter Liang.

It is true that Peter Liang may have been punished more severely than a white cop for killing Akai Gurley. However, Liang will not go to prison; his punishment was light; he will continue onward with his life, and Akai Gurley is still dead.

Police violence against black Americans is one of the remaining hangovers from a country founded on slavery, and where Jim and Jane Crow Apartheid was the rule of the land until the 1960s.

This is a moral abomination.

While the enforcers of this history and a system of white supremacy that lingers into the present may be more “racially diverse,” their murderous and other illegal deeds--and the protection offered for them--are no less racist and wrong.