Europe is a moral wasteland: Countless refugees continue to die while the West turns a blind eye

As many as 500 migrants died just last week, yet the world's powers pretend this calamity still isn't their problem 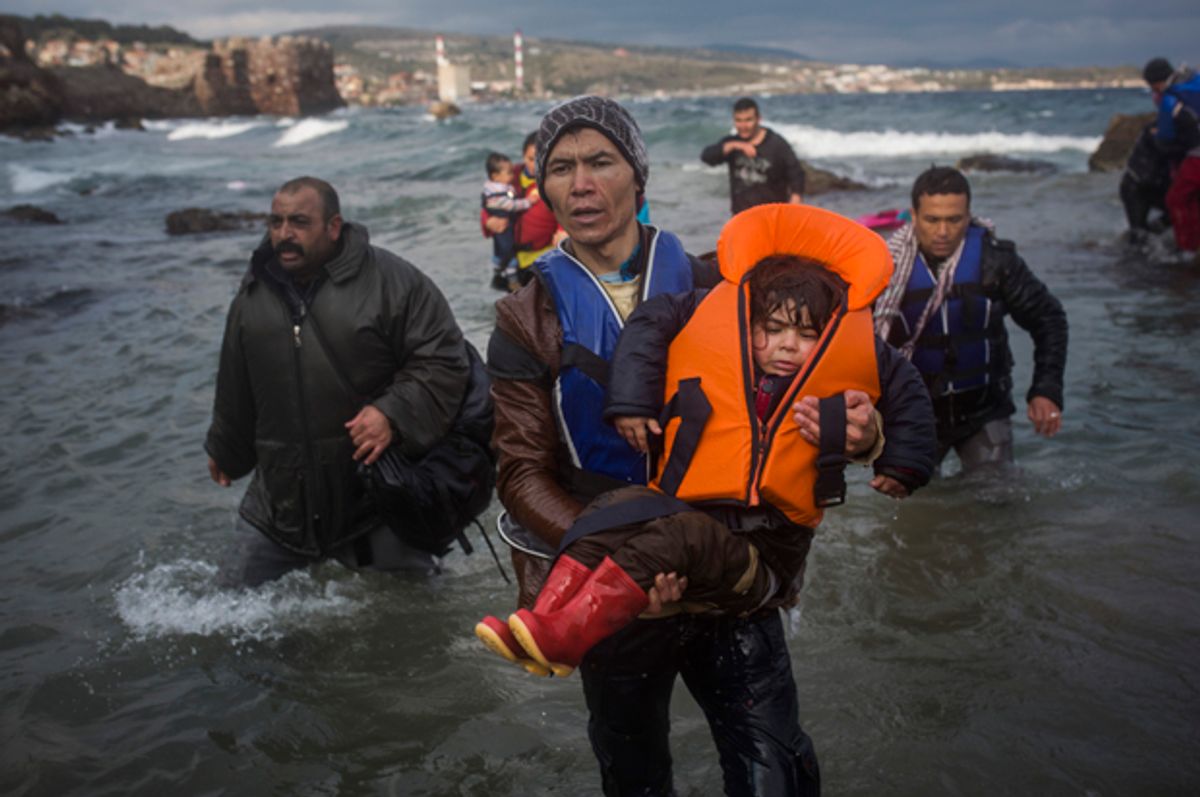 Refugees and migrants make their way out of the Aegean Sea on the Greek island of Lesbos, Dec. 12, 2015. (AP/Santi Palacios)
--

After days of rumored disaster, United Nations officials now estimate that as many as 500 migrants died earlier this month in the Mediterranean after their ship capsized en route from Libya to Italy. Many appear to be Somalis.

“The flow consists almost exclusively of people from sub-Saharan Africa,” The Guardian reports. “Syrians have yet to reach Libya following the closure of the Greek route, but migration specialists expect them to try again from Libya in increasing numbers later in the year.”

The tragedy won’t make headlines for long, and fresh ones are sure to follow. Sub-Saharan Africans, who may represent the bulk of last week’s mass drowning, never won much sympathy to begin with. Now Europe, under siege from an insurgent far right, is trying to slam the door shut on Syrians as well: Since recent attacks in France, Belgium, and San Bernardino, tenuous solidarity for ISIS victims has been replaced by a conviction that refugees are in fact ISIS.

Never mind that attacks have mostly been carried out by European-born men. Rather than take a look in a mirror, France has imposed a draconian and alienating state of emergency, and Europe has cut a deal with Turkish President Recep Tayyip Erdogan, exchanging cash and political legitimacy in return for accepting refugees forcefully returned from Greece in contravention of international and European law.

Arrivals on Greek shores have plummeted since the accord’s enactment. But both desperation and aspiration find a way, and the lack of a regular process for migrants and refugees only encourages people to take irregular and dangerous routes. And so people die.

“You patrol the seas better, then land routes are exploited,” Nigar Göksel, a Turkey analyst at International Crisis Group, told Frontline. “Or the price of smuggling goes up, or different ways of creating fake documents are discovered. Smugglers often win out in these circumstances.”

Turkey, according to Human Rights Watch, has all but closed its border with Syria since March 2015, even as refugees stuck inside the country flee camps threatened by ISIS and the Assad regime. Recently, Turkish border police allegedly shot at refugees fleeing ISIS advances. According to an Amnesty International report, investigations on “Turkey’s southern border provinces suggests that Turkish authorities have been rounding up and expelling groups of around 100 Syrian men, women and children to Syria on a near-daily basis since mid-January.”

“The EU deal is based on the deceptive premise that all returned people are safe in Turkey, when the facts say otherwise,” said Fred Abrahams of Human Rights Watch, in what seems like a significant understatement.

Europe has pledged to accept one Syrian refugee from Turkey for every one sent back. The accord is purportedly meant to discourage refugees from making a dangerous sea crossing. But perversely, the number of Syrian refugees that Europe accepts under the deal is tied to the number who irregularly cross and are then sent back to Turkey.

What’s worse, this not-so-magnanimous deal does not even extend to other refugees, including, remarkably, Afghans, thousands of whom are already stuck in Turkey with access to neither refugee camps nor legal work. Turkey allegedly deported about 30 Afghan asylum seekers to Kabul “just hours after” the accord with Europe was signed, according to Amnesty International. People from Iraq aren’t covered either. Europe is distinguishing not only between refugees and economic migrants but between those refugees who are deserving and those who are not. And what do these distinctions even mean when it comes to people willing to risk death?

German Chancellor Angela Merkel, after years of migrants dying at sea, finally became a limited-purpose hero last year, dubbed “compassionate mother” by grateful refugees after resettling many of the more than one million that crossed into Europe. Anti-migrant sentiment and violence cut that solidarity short soon thereafter, and countries including Austria and Macedonia closed their borders. And so Turkey is now the supposed save haven.

Europe’s priority is not saving lives. The Italian Mare Nostrum sea rescue mission, which according to the Italian government saved the lives of roughly 166,000 in 2014, was shut down under heavy criticism from Germany. Europe condemns smugglers, and has even pondered military operations against them. But they ignore the fact that their military and economic policies have for centuries created the condition of their possibility.

The accord is purportedly about safety but the notion that refugees belong in Turkey and not Europe is simply a racist one: They are mostly Muslims like in Turkey, and not Christians like in Europe. Ironically, it is Turkey’s Muslim population and its terrible human rights record that have long frustrated its desired ascension to the European Union. Now, Europe has proven willing to trade quite a lot to Turkey, where the human rights situation has rapidly deteriorated in recent years, for the sake of ethno-national homogeneity: Last week, after a satirist dared mock Erdogan, Merkel green-lighted a prosecution, under a very illiberal and very old German law, on behalf of the thin-skinned and authoritarian leader.

It’s often said that there’s a migrant crisis in Europe. In reality, the crisis in Europe is mostly a political one. According to the UN Refugee Agency, just “slightly more than 10 percent of those who have fled the conflict [in Syria are] seeking safety in Europe.” Today, there are roughly 4,841,807 registered Syrian refugees worldwide. By April 2014, nearly one in five people in tiny, constantly-destabilized Lebanon were already Syrian refugees.

Merkel’s initial response was laudable. But her brutal response to Europe’s financial crisis had helped lay the groundwork for today’s meanness, rallying the continent’s worst instincts to break Greece’s uprising against austerity. In turn, that austerity further worsened the living conditions of European workers—making them all the more susceptible to right-wing demagogues.

The U.S., of course, has behaved even more horribly, accepting roughly 3,100 total Syrian refugees since 2011, as of a Boston Globe overview published in late March. That included just about 1,200 of the mere 10,000 refugees that President Obama had pledged to settle by this October. The leading Republican presidential candidate, of course, wants to bar Muslims from the country.

There is something profoundly stupid but predictable about countries that invaded Iraq and colonized Africa, that foster a global system that exploits the poor for the benefit of the rich, that supported the overthrow of the Somalia’s government and carved up the Middle East into a despotic jigsaw puzzle now wondering just how the world came to be such a mess. Europe is clinging to a vision of the nation-state that colonialism has always made impossible. The hypocrisy is the same for economic migrants: People migrate from Africa fleeing poverty and war, but yes, also just to seek a better life. Moralizing about whether those people are deserving is beside the point, because a global economy entails a global labor market and migration. The trajectory of capital, like that of violence, boomerangs.

Shutting the doors on refugees and migrants requires a profound lack of the basic human solidarity required by most any existing moral system that I’m aware of. This cruelty, however, is also premised upon the idea that it’s not our problem. The belief that one, and one’s nation, are innocent of whatever crime has sent these people trekking across continents and risking their lives at sea.

The West, however, has been eager to wage wars in the name of human rights. “Some nations may be able to turn a blind eye to atrocities in other countries,” President Obama bragged in 2011 over NATO’s intervention in Libya. “The United States of America is different.”

The humans in whose name these wars have been fought are now being deported back toward war zones. They are dying at sea in enormous numbers. They live or are detained in squalid camps and are abused by security forces.

The European Union was “founded on the values of respect for human dignity, freedom, democracy, equality, the rule of law and respect for human rights, including the rights of persons belonging to minorities. These values are common to the Member States in a society in which pluralism, non-discrimination, tolerance, justice, solidarity and equality between women and men prevail.”

It's now clear that the moral posturing of the West is fraudulent.

This is of course not to suggest that other places are of better moral quality. Far from it: consider the Thai junta returning Chinese dissidents to China, the Egyptian military dictatorship’s complicity in Israel’s blockade of Gaza, the Gulf states’ systematic exploitation of guest workers, or the alleged abuses committed by Mexican agents, on behalf of the United States, against Central Americans fleeing gangster terror. The world is in large part run by mean, venal and greedy people. But the next time the West invokes its moral superiority remember that they have already failed humanity’s most basic test.