"Game of Thrones" goes to war: The once-radical fantasy is now the establishment—for better and for worse

TV has changed since HBO's flagship debuted—is the saga of Tyrion, Dany & Jon Snow (dead or alive) still on top? 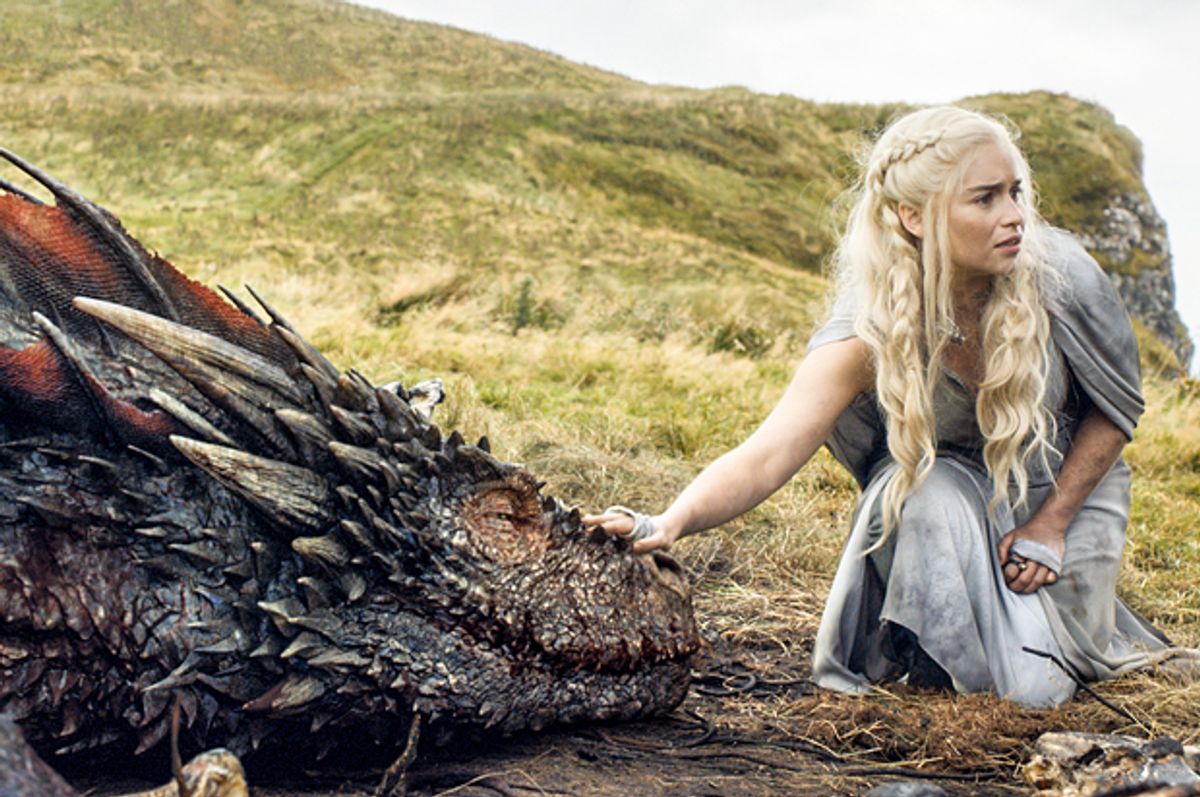 The biggest show on television is returning this weekend. Love it or hate it, HBO’s “Game Of Thrones” cannot be ignored, either for the scope of its production, its massive audience engagement, or the influence it’s had on the rest of the television landscape. With 20 million viewers per episode across all platforms, “Game Of Thrones”’ viewership makes it one of the most watched television shows in America; and on top of those legal numbers, illegal piracy for the show set new records in season five. To add hype to buzz, season five got the show its first Emmy for Outstanding Drama Series, but the show was an awards juggernaut before that—26 Emmy wins and 83 nominations over the last five seasons.

HBO is thanking its lucky stars that “Game Of Thrones” is both as good and as popular as it is. In 2011, when “Game Of Thrones” debuted, the network had “Boardwalk Empire” and “True Blood” to add to its uneven but prestigious drama slate. Right now, HBO has “Vinyl” and “The Leftovers,” two shows with dismal first seasons and major retools for its second. Audiences haven’t shown up to either. And as rising star “True Detective” first shone brightly and then fell to earth in a heap of ashes, HBO’s ability to tell powerful dramatic stories has been called into doubt. And though it would probably take just one more hit for HBO to seem back on top of the television industry, “Game Of Thrones” sixth-season premiere meanwhile feels a bit more desperate to make a splash.

The good news, for you the viewer, is that the talent behind “Game Of Thrones” hasn’t gone anywhere. I can’t say so firsthand—the network chose not to make any advance screeners available to critics (though President Obama got a few episodes, which prompted Refinery29's Vanessa Golembewski to cheekily file a Freedom Of Information Act request for them). But nothing behind the scenes of “Game Of Thrones” has changed; this isn’t even the first season that the show has had to substantially create a narrative beyond what is outlined in the original book series, “A Song Of Ice And Fire,” which has yet to be completed by author George R.R. Martin.

And yet, I am curious to see if watching “Game Of Thrones” in 2016 is going to feel a bit like watching a televisual relic. Partly that’s because the show is so unique in its mastery and appeal—the closest analogue to “Game Of Thrones” is probably AMC’s “The Walking Dead,” which started a year before the HBO show. It’s based on a popular genre comic-book series and has even more per-week viewers; AMC’s post-show talk-show, “Talking Dead,” inspired HBO’s upcoming post-show talk-show, “After The Thrones.” But “Game Of Thrones” is just better—richer, smarter, and more cinematic, especially compared to “The Walking Dead”’s clunker of a season that ended just a few weeks ago. I will be the first to say, as a fan of the books as well, that “Game Of Thrones” is a tight, stunning adaptation of perceptive but longwinded books, with extraordinary resonance about power, identity, and belief, in their world as in ours.

In 2011, it was difficult to imagine a prestige adult television series based on an unfinished set of fantasy novels published mostly in the late ‘90s. The “Harry Potter” and “Lord Of The Rings” books and movies were successful, but decidedly not sexy. In 2016, there are multiple such shows, including “Outlander” on Starz and “The Shannara Chronicles” on MTV. “Game Of Thrones” became so popular with a mainstream audience that it moved from the stuff of niche nerds to everyday watercooler discussion. In bridging the gap between the nerds and the bros, showrunners David Benioff and D.B. Weiss created a show that had the high production values and male angst of so many prestige dramas, with the added injection of magic, boobs, and magical boobs. It was quite a coup, as far as leading one wealthy and powerful demographic to unoccupied territory goes; “Game Of Thrones” made it more cool to be into dragons than “The Goblet Of Fire” and “The Desolation Of Smaug” combined.

But over the past five years, the television landscape has changed. We have moved, very quickly, from praising the Golden Age of television to critiquing its blind spots; as the amount of programming has mushroomed, so has the conversation around it. “Game Of Thrones” has transformed from being emblematic of the innovative potential of television to being emblematic of some of its most stubborn problems. Reflecting this, the shows around “Game Of Thrones” have changed quite a bit, too. The cinematic male-oriented dramas that dominated the conversation in the late 2000s have almost, with a few notable exceptions like "Fargo" and "Better Call Saul," entirely yielded the territory of critical adoration to quirky and smart half-hour comedies. On HBO’s rival networks, prestige cable hits like “Mad Men” and “Breaking Bad” ended their runs on AMC, Showtime’s flagship “Homeland” faded into irrelevancy, and upstart Netflix hasn’t been able to produce a drama worth investing in. Meanwhile, half-hour shows across television, like “Girls,” “Transparent,” “Unbreakable Kimmy Schmidt,” and “You’re The Worst,” have charmed audiences and critics alike.

The innovations in drama have not been at the expensive prestige level, with cable’s loose censorship regulations; they’ve been on broadcast, where executives saw an opportunity in an audience very underserved by “Game Of Thrones”—women of color. Delivering programming aimed at and starring women of color — see “How To Get Away With Murder,” “Empire,” or newer offerings like “Shades Of Blue” — has become not just a creative innovation but a network mandate. Meanwhile, "Transparent" home Amazon Studios and Starz, with “Outlander” and “The Girlfriend Experience,” are creating programming that engages with the once-academic, now-real notion of the female gaze, exploring feminine fantasy and desire as so many prestige dramas have done for male viewers.

The result is that “Game Of Thrones” does not, today, feel particularly different or relevant. In a world where the media portrayals of sexual assault, race relations, and the transgender experience are rapidly becoming not just familiar but de rigueur, the HBO drama’s nearly all-white fantasy world that so deliberately caters to the male gaze feels frustratingly antiquated. “A Song Of Ice And Fire,” when it first came out in the late ‘90s, wasn’t just an adult fantasy series—it was also one that consciously sought to deconstruct the tropes of fantasy novels like “The Lord Of The Rings” trilogy. In a world where magic either lived in the whimsical tea cozy of Hogwarts or the curiously neutered realm of Middle-Earth, Westeros was both fantastical and recognizable as a crueler world, very much like our own. The book "Game Of Thrones" chose to center its female characters as equally important as its male characters; in 1996, this was revolutionary.

But it’s been 20 years since then, and six years of watching “Game Of Thrones” evolve on the screen. As “Game Of Thrones” airs its sixth season, the worldview encapsulated within it will feel quaintly conservative to many television viewers. To be sure, it’s quite difficult to make the sixth season of a show about a medieval-ish fantasy world feel current and relevant—and to its credit, “Game Of Thrones” has attempted to. Specifically, it has had to radically adjust the way it filmed and presented rape scenes after season three’s “Breaker Of Chains.” But it’s necessarily hamstrung, too. Perhaps a show like “Unbreakable Kimmy Schmidt” can get meta by making an episode engaging with the tumultuous and evolving Internet conversation about intersectionality and representation. But “Game Of Thrones” definitively can’t produce an episode where Tyrion Lannister (Peter Dinklage) goes online and reads what people are saying about him (though it would be funny).

It’s not just Westeros, though, that makes it hard for “Game Of Thrones” to evolve further. It’s that massive industry clout, that aforementioned ravenous demographic, and that desperation that HBO has to make sure that season six of “Game Of Thrones” hits their audience and subscriber expectations. Perhaps Benioff and Weiss find the themes underpinning the sexposition and gore of “Game Of Thrones” to be resonant and significant. But as I’ve written before, the violence of “Game Of Thrones” is pitched to a privileged male audience, for their fascination and delight. At the risk of sounding too cynical, I think the moments of exploitation are there mostly for exploitation’s sake; this is an adaptation of Martin’s books that has written in a pregnant woman being stabbed to death just because they could, for example.

This is a big, defining season for “Game Of Thrones,” and a shaky one for its parent network, HBO, which is pinning most of its hopes and dreams on its one fierce dragon. But spectacular trailers and special effects aside, I’m not expecting “Game Of Thrones” to push the envelope in any exciting or interesting ways; when stressed, HBO errs toward bro, instead of the proverbial ho. Because “Game Of Thrones” is HBO’s flagship program, it’s cheating conservative to stay popular. That’s how money works, of course—HBO’s subscribers pay their cable bills expecting a certain product from “Game Of Thrones,” and six seasons in, the show must of course deliver. But for the biggest show on television, it’s a little sad, too.