Not anyone's "crazy bitch": Smashing the "Fatal Attraction" clichés of the "female breakdown" 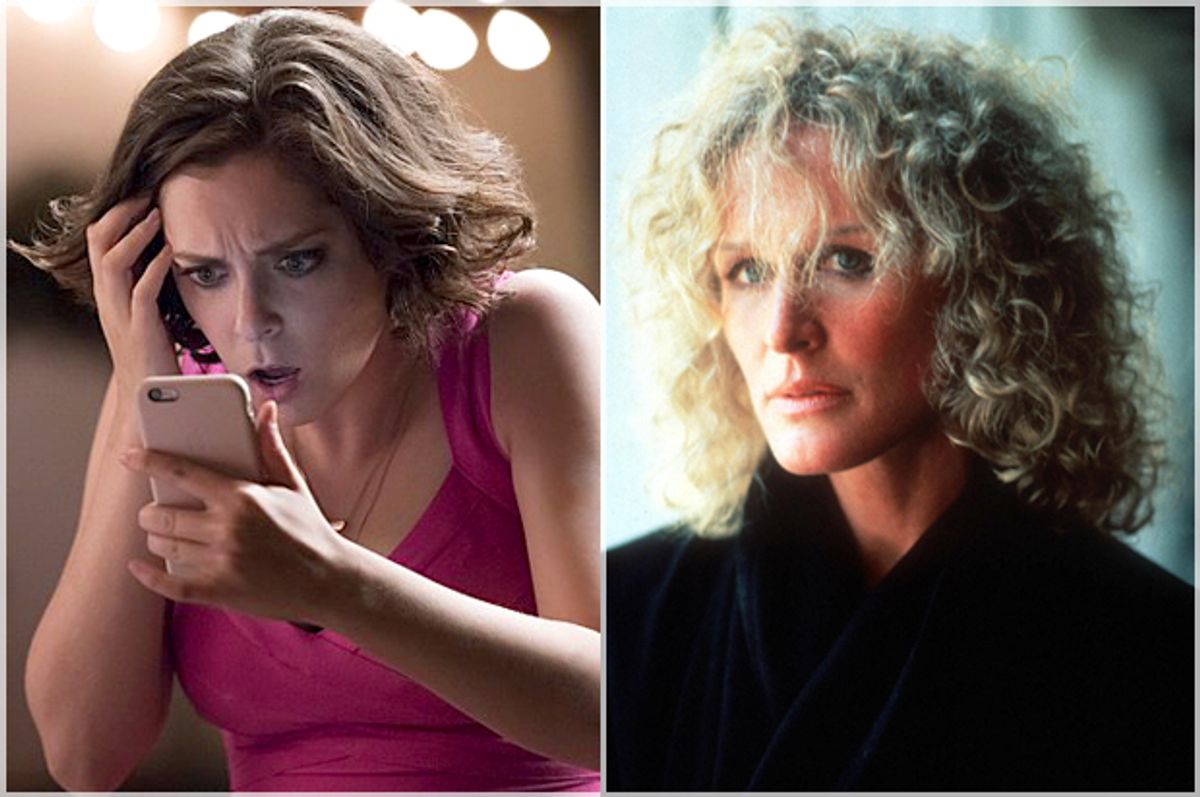 On their self-titled debut album, the Seattle queer electroclash band, Le Tigre, debates the merits of John Cassavetes. Singing in unison, the band chants: “We've talked about it in letters/And we've talked about it on the phone/But how you really feel about it/I don't really know.” Is Cassavetes a misogynist, genius, alcoholic, or messiah? Or is he all of the above?

The tune is an overt response to the great director’s “A Woman Under the Influence,” the powerful 1974 drama starring his wife, Gena Rowlands, as a Los Angeles housewife, Mabel, who begins to behave in bizarre, irrational ways. To resolve the issue, her husband, Nick (Peter Falk), commits her to a mental institution. It doesn’t help. Mabel returns as volatile and suicidal as when she left, even as her husband insists on normalcy. “Normal conversation,” he scolds Mabel during a breakdown.  “I don't know how to make it,” she confesses. “At the hospital, they come in every morning and give you a shot.”

Although John Cassavetes’ film is one of the most emotionally wrenching depictions of mental illness ever committed to celluloid, the trouble is its perspective. “A Woman Under the Influence” views its subject not as a breathing, living human than a moth pinned to a board—on display to be viewed. It’s Nick who serves as the closest thing to a surrogate for the audience as Cassavetes slowly tears off her wings.

This is a trait shared by the later Danish auteur of female misery, Lars von Trier. In films like “Dancer in the Dark,” “Breaking the Waves,” “Melancholia,” and “Antichrist,” the director heaps unimaginable tragedy onto his subjects in order to push them to extremes of suffering. In “Antichrist,” a couple (played by Willem Dafoe and Charlotte Gainsbourg) lose their newborn baby, who falls to his death. Von Trier, however, is seemingly uninterested in his pain, staging her descent into madness as a violent rampage. During the film’s most infamous scene, the woman—who is unnamed—makes it very difficult for her partner to ever have another child. (Google it, if you must.)

These directors rip women apart to examine their insides, but movies about the “female breakdown” are rarely invested in the woman’s internal emotional journey. Perhaps the most famous example is “Fatal Attraction,” which is a very different film if told from the woman’s point of view.

Let’s try it: Alex Forrest (Glenn Close) is a high-powered editor at a publishing company. Wealthy, beautiful, and successful, she meets a man, Dan (Michael Douglas), with whom she has a passionate, tumultuous affair. (She’s got her own emotional baggage, after all.) Alex gets pregnant, but there’s a problem: He’s married. Terrified that this might be her last shot at motherhood (she’s nearing her 40s), Alex decides to keep the child. Dan is unsupportive of her decision and repeatedly tries to avoid communication with her or responsibility for the situation. After Alex has a protracted meltdown, Dan later kills her.

This is a selective reading, of course, but so is the movie Adrian Lyne actually made: one that views women as “crazy bitches” (or as “Wayne’s World” would later put it, “psycho hose beasts”) determined to blackmail you or murder your rabbit. These women do not have rich inner lives or lives at all. After all, a bug doesn’t have interiority. It waits to be squashed.

Why do people sing in musicals? As the old saying goes, characters break out into song when they have emotions that are too grand to express through dialogue, ones that otherwise that might not have the words to share.

In the CW’s “Crazy Ex-Girlfriend,” which just wrapped its second season, its sparkling numbers offer a portal into the brain of Rebecca Bunch (Rachel Bloom). After she single-handedly wrecks her chance of happiness with Josh (Vincent Rodriguez III), the childhood sweetheart whom she moved across the country to be with, Rebecca sulks in her apartment, literally cleaning up the mess she’s made. To underscore the moment, she sings “You Stupid Bitch” in a fantasy sequence. “It’s so wonderful to be back here, even though I’m here singing this song a lot,” Rebecca says to an imaginary audience.

The song itself is an internal monologue of self-loathing and self-pity, filled with the sorts of painful, raw observations accrued from absorbing a lifetime of listening to what others say about you. While calling herself a “poopy little slut who doesn’t think and deceives the people she loves,” Rebecca looks into her own black void: “Yes, Josh completes me, but how can that be if there’s no me left to complete?”

The show’s title recalls “My Super Ex-Girlfriend,” the Ivan Reitman film in which a clingy superheroine (Uma Thurman) wreaks havoc on the life of the guy who dumped her (Luke Wilson). What’s important about the CW program, however, is that it drops the possessive. “Crazy Ex-Girlfriend” is firmly grounded in Rebecca’s own perspective, rather than viewing her through the male gaze or treating her as a trope. If feminist critic Susan Faludi once argued in her seminal 1991 book, “Backlash,” that films like “Fatal Attraction” framed women’s lives “as morality tales” for men, “Crazy Ex-Girlfriend” is finally about Rebecca’s own flawed, treacherous journey.

Rebecca is less a “crazy bitch” in the Adrian Lyne sense of the term than a type the New Yorker’s Emily Nussbaum once classified in her “Hummingbird Theory.” Embodied by characters like Sue (Eden Sher) in “The Middle” and Amy Jellicoe (Laura Dern) from the great, underloved “Enlightened,” the hummingbird is both relentlessly optimistic and provokes a certain sense of anxiety. “[Amy] makes viewers, and everyone who meets her, wildly uncomfortable: Amy’s inner vision of herself as a chill New Age seeker is rarely matched by her outward appearance,” Nussbaum writes. “She’s needy, she’s manipulative, she’s passive-aggressive.”

“Enlightened” depicts Amy as constantly on the verge of a nervous breakdown. In the pilot, Amy has her Gena Rowlands moment: She’s been demoted at work after her fellow employees learn of her alcoholism and a lengthy streak of bad behavior—including an affair with her married boss. Amy shatters spectacularly, just as the shelves coming crashing down inside her. She’s subsequently fired and goes on a holistic retreat to deal with her anger management issues. After reintegrating into her old life two months later, Amy finds healing to be more of a struggle than she bargained for. Despite her goals, she always appears one or two negative plot developments away from another mental break.

If the Washington Post’s Harris O’Malley once argued that words like “crazy” are used to “shame women into compliance,” such outbursts of emotion are often used to stigmatize female characters. To impress her old flame, Rebecca rents a party bus, where she has a stripper-pole-induced meltdown in front of all his friends. In “Fatal Attraction,” such behavior would make her an untouchable. But when given agency and dramatic depth, these women become something truer—fragile things that relentlessly beat their wings, trying to take flight.

Mavis Gary (Charlize Theron), the central figure in Jason Reitman’s “Young Adult,” isn’t the optimist either of these women are—at least, not in any conventional way. Mavis is a children’s book author and one-time prom queen determined to win back her high school love, Buddy (Patrick Wilson), at any costs. She’s blunt to the point of ruthlessness. In one scene, an old classmate (Patton Oswalt) explains that there’s a hole in Mavis’ plan: Her ex-beau is married with a kid on the way. “The kid’s here,” Mavis responds. “She had the baby. I don’t care though. I have baggage, too.” When Buddy informs her of the same, Mavis is still undeterred. “I know, we can beat this thing together!” she exclaims.

Mavis is the kind of character who begs for an armchair diagnosis. Clearly there’s something going on. In Roger Ebert’s review of “Young Adult,” he referred to her as an alcoholic. By her own admission, she’s a depressive. In a memorable exchange, Buddy’s wife, Beth (Elizabeth Reaser), explains that she often uses a feelings chart on the special needs students with whom she works. “What about neutral?” Mavis responds. “What if you don’t feel anything?” If Cassavetes’ women were hysterical, Mavis’ breakdown is quieter and more complicated.

But what’s so refreshing about pop culture’s wave of women in emotional crisis is that they defy easy characterization. As the Huffington Post’s Emma Gray points out, it’s very probable that Rebecca Bunch has a mental illness—and the show seems to point toward a history of clinical depression. In the pilot, Rebecca pours a bottle of pills down the drain, and she spends a great deal of the first season avoiding her reluctant therapist, Dr. Akopian (Michael Hyatt). “But she’s also intelligent, funny, professionally competent, flirtatious, goofy, charming and brave,” Gray writes. “Basically, she’s a human being.” She might be damaged and messy, but she’s also deeply relatable.

That’s the thing about women like Rebecca, Mavis, and Amy: We’ve been so interested in trying to pin them down that we haven’t ever given them a chance to fly.