With Michael Strahan decamping for "Good Morning America," his cohost is preparing for war 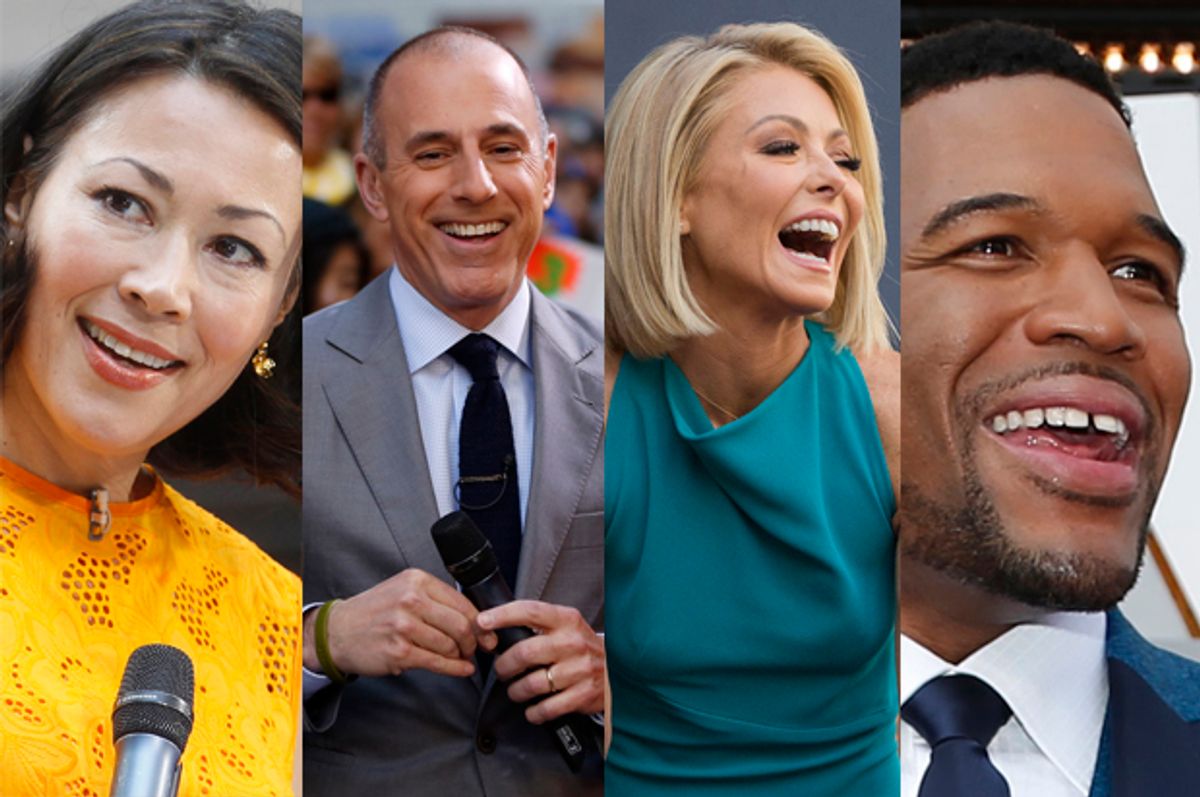 It's a good bet that nobody guessed that the most vicious media storm of the week would center around Kelly Ripa, but that was before the morning TV star began boycotting her own show for days on end following her co-host Michael Strahan's sudden announcement that he was leaving to become a full-time host of "Good Morning America."

Ever since Strahan and ABC, which runs both shows, broke that news on Tuesday, Ripa has launched a very public, and bitter, feud with her network bosses, one that has all of the elements we've come to expect: Allies of Ripa and Strahan are sniping at each other anonymously in the press. Ripa is walking around with pointedly chosen books. ABC is trying to calm the situation down.

(Full disclosure: I work part-time for Fusion, which is co-owned by ABC, though that business arrangement is about to end.)

Ripa's situation must feel as bizarre to her as it is galling. Whatever you think of the job she has, she is extremely good at it. She's a smart, personable, popular host who has kept her show at the top of the ratings. She led it smoothly and successfully through the challenge of Regis Philbin's departure and emerged unscathed. What does she get in return (besides a hefty salary, of course)? Her co-host walks out on her with barely any notice. It's no wonder she's revolting.

But, for all the particulars of this specific situation, Ripa and Strahan and ABC are participating in a grand tradition: the morning TV firestorm.

Morning television has long been a breeding ground for some of the most brutal and prolonged interpersonal conflicts in the media business. This is for a couple of reasons. First, mornings are very high-stakes hours for networks because they often bring in tons of money. The morning news shows, for instance, frequently prop up the entire news division. Secondly, morning hosts forge unusually powerful bonds with their audiences. Unlike many of their evening counterparts, they're on for more time and the fabric of the shows they anchor are totally rooted in their personalities. Nobody feels like they know Lester Holt that well, but everyone knows Al Roker.

This inevitably makes any drama surrounding these people about a million times worse. When things go bad, they go very, very bad indeed.

For example, the imbroglio that NBC and the "Today" show suffered through when it threw host Ann Curry overboard in 2012 is probably still the worst example of this. It was a disaster of monumental proportions. Everything about it—from the obvious bad blood between Curry and co-host Matt Lauer to the shudderingly extended public dissection of whether or not Curry was going to be tossed and Curry's heartbreaking on-air exit—was so intensely damaging to all involved that "Today" is just now recovering fully from it. Lauer's reputation came close to being completely destroyed by the scandal.

You'd have thought that NBC would have learned its lesson from the last time it drastically tampered with "Today" in 1989. That's when it moved longtime host Jane Pauley out of her chair for the younger, spectacularly ill-fated Deborah Norville. Viewers never forgave Norville. She lasted just 14 months before being replaced by Katie Couric, who was rather more successful in the job.

ABC has usually handled its dirty deeds with slightly less ferocity, but no network can avoid the morning curse completely. "The View," for example, has been the home of tumultuous exit after tumultuous exit, from Rosie O'Donnell to Star Jones to Elisabeth Hasselbeck to Rosie O'Donnell again. Still, ABC has typically been a rather more stable sort of place. "Good Morning America" rose to dominance precisely for that reason. Whatever Robin Roberts and George Stephanopoulos think about each other behind the scenes, they've managed to get along just fine. While "Today" destroyed itself, they presided over a happy-go-lucky, feel-good show and won.

But now "GMA" finds "Today" nipping at its heels in the ratings again, and ABC is getting antsy. Unfortunately, its solution to the problem—Strahan—has now blown up in its face. Strahan is supposed to stay in his job with Ripa until September. It will be astonishing if that actually winds up happening. Frankly, it would be less surprising if the two never co-host another show again. You can be equally sure that something like this will happen again to one show or another in the future. That's just how it goes in the mornings.