Beyoncé's radical invitation: In "Lemonade," a blueprint for black women working through pain

Some will consume "Lemonade" for the gossip, but its healing themes for black women are bigger than one family 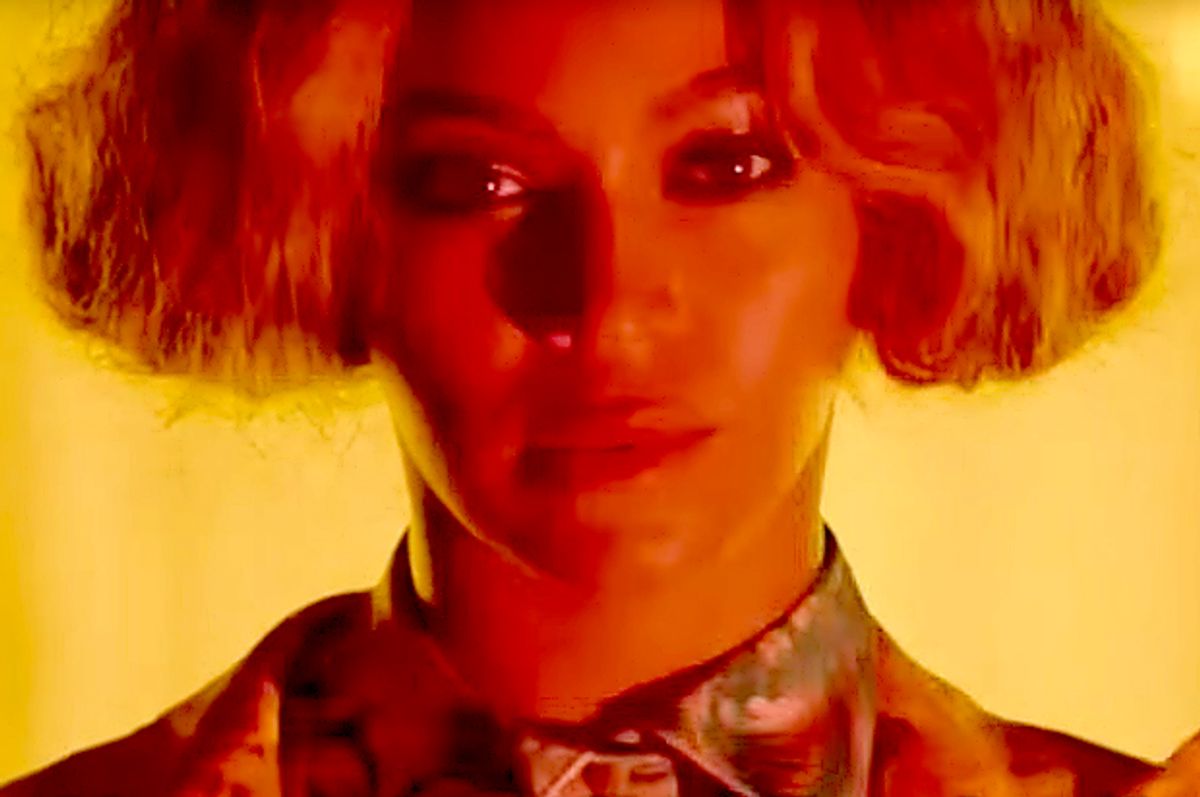 Beyoncé just shared her testimony through the ministry of song. Saturday night on HBO, Queen Bey took us through the visual anthology of her highly-anticipated album “Lemonade,” a narrative of grief, told in stages — intuition, denial, anger, apathy, emptiness, accountability, reformation and forgiveness. Watching her acknowledgement of this inner battle unfold is like witnessing a Black Girl Magic Super Bowl — it’s that powerful.

Interspersed between new songs are visceral monologues by Somali-British poet Warsan Shire. One minute you’re cheering, yassss come through! as fierce bat-wielding Beyoncé slays in a yellow gown, and the next you’re tearing up as mothers of sons killed at the hands of police officers show pictures of their children. Beyoncé also gives us an autobiographical sketch of her Houston, Texas, upbringing, complete with footage, and video of Jay Z’s grandmother making a speech on her 90th birthday: “I was served lemons, but I made lemonade.”

“Lemonade” is Beyoncé’s personal story as much as it is ours as African American women (sorry, Becky). She did this one for us. Her story is one of resilience, pushing past pain with superwoman strength. At the same time, she signals she’s done wearing the “I’m good” façade — it hurts, and we’ve done it for too long. Instead, Beyoncé gives us a play-by-play on how she has coped with pain, and how we might be able to as well. It’s more than having sister-girl venting sessions — it’s being really present with ourselves and allowing one another to be confident with our own emotions. It’s important that we affirm in one another that there is nothing wrong with being angry, sad and being completely over everything, but we also have to understand that we can’t stay down in that place. As Beyoncé sings about the burden of her grief, she doesn’t shy away from unpacking her historical self. She flashes between present and past shots to bring historical context to her visuals, just as she did in her black power anthem “Formation.”

In the opening, she lays the foundation for the message and tone of the album. We find Beyoncé kneeling down in front of a red curtain with a black hoodie on, as she explores the role intuition plays in reading the signs, or rumors, of infidelity. She questions whether or not the man in her narrative — widely interpreted by fans as commentary on her husband, Jay Z, and rumors about his alleged infidelity — is cheating and attempts to affirm that there is no way this could happen: “They don’t love you like I do, and they don’t love you like I do.” While she’s trying to self-affirm, we see her drowning in the waters of her own self-doubt.

She goes through everything that she went through in order to regain her sense of self-worth and identity, from reading the Bible to changing the way she looked in the first track. So many of us can relate to the idea of looking for our identity in men, even if the relationship is dysfunctional—we always go back to ourselves and attempt to fix some aspect of ourselves in order to appease a man’s perceived wants and needs.

Beyoncé moves into the chapter of denial as she comes through smashing the windows out of cars with a bat and driving a monster truck over a line of parked cars. The women witnessing Queen Bey’s aggression react with both shock and head-nodding approval. Once she’s done denying everything, we see angry Beyoncé in the next chapter, “Don’t Hurt Yourself.” She’s still not over the betrayal. This time around though, she’s brought her girls along with her.

In the words of Shire, whose poems become monologues in “Lemonade”:

If this what you truly want. I can wear her skin over mine. Her hair, over mine, her hands as gloves, her teeth as confetti, her scalp a cap, her sternum, my bedazzled cane. We can pose for a photograph, all three of us, immortalized.

You and your perfect girl.... Why can't you see me? Everyone else can.

We see a group of women all wearing white and joined together in a circle; she understands that her story could be any of ours. Black women bear the burden of invisibility politics, being the mule, but never being acknowledged. It’s been an ongoing struggle throughout history for proper representation — whether a voice in the political arena or the proper representations of our fly in the media, without the nuances of being hyper-sexualized.

And then, the most turned-up all-girls party begins. Beyoncé sits nonchalantly in a bodysuit with Serena Williams twerking at her side — yeah, that happened. She’s over everything as she sings, “suck my balls.” (WHAT!) Beyoncé: a champion in the entertainment world; Serena Williams, a champion athlete. They come together to let us know that they got this—men aside, they are going to keep on winning no matter what.

But despite the efforts to look as though she is winning, Beyoncé finds herself feeling empty.

In this next chapter we find her in a red dress, surrounded by fire:

She sleeps all day, dreams of you in both worlds...Grief, sedated by orgasm. Orgasm heightened by grief. God was in the room when the man said to the woman, "I love you so much, wrap your legs around me and pull me in, pull me in, pull me in." Sometimes when he'd have her nipple in his mouth, she'd whisper "Oh my God." That too is a form of worship.

She then goes off in “Six Inch,” and introduces a new form of feminism, one where stripping is praised—“she worth every dollar and she’s worth every minute — making it clear that when we talk about black women's empowerment, we aren’t shaming a sister for choosing to use her body to make money. We move into a stage of accountability. We find her getting candid about her turbulent relationship with her father. The scene cuts between old footage of her with her father, and alone, in an Afro-centric ball gown. She poses a series of questions:

Did he bend your reflection? Did he make you forget your own name? Did he convince you he was a god? Did you get on your knees daily? Do his eyes close like doors? Are you a slave to the back of his hand? Am I talking about your husband or your father?

Once we address the pain that has been brought into our lives through fraught relationships, “Lemonade” suggests, we can go be reborn. We see a group a women together wade into the water wearing all white, and it’s spiritual. The scene feels like a southern baptismal moment—any moment you’re waiting for them to breakout into a hymn. However, this moment of soul baptism is set to “Love Drought,” — without internalizing the pain, the power of love can "move a mountain," "calm a war down," "make it rain now." This moment brings the arc of her testimony full circle — she started off feeling pinned down by the waters of self-doubt, and now she comes back up with  a new understanding of love.

Once the relationship with love is made new, forgiveness can happen. We see Jay, finally, and Beyoncé loving on one another in a very beautiful, PG-rated way. In the first song she sings, “I tried to make a home out of you.” “Sandcastles” brings this image full circle — the “home” as a fragile structure that can break when the water comes through, but can also be rebuilt.

The pain in “Lemonade” is not all personal — in “Forward,” she features mothers who have lost their sons to police brutality holding up their pictures: Sybrina Fulton, mother of Trayvon Martin; Lesley McSpadden, Mike Brown's mother; and Gwen Carr, Eric Garner's mother. Once she’s done unpacking past and present pain, Beyoncé ushers in with, “Freedom song,” featuring Kendrick Lamar: "Freedom! Freedom! I can't move/ Freedom, cut me loose.... I break chains all by myself.” This empowering song calls forth our truth.

And finally, redemption — Beyoncé unveils the preservation of her love. We see shots of Jay and Beyoncé celebrating their daughter’s birthday together and of them playing in the middle of an empty football stadium. To bring the narrative full circle there's also footage from Jay Z and Beyoncé’s wedding, a shot of Beyoncé’s mom, Tina, dancing with her husband. It's all set to the album's penultimate track "All Night" — a song about starting again: "Our love was stronger than your pride / Beyond your darkness, I'm your light."

The power of love is what will set us free; however, it’s important that we give each other the time and space to recover and become whole again. It is through this process that an awakening can happen — for us and for our communities.

As a culture, we haven’t created spaces for — let alone acknowledged the mental health needs of — African American women. We are forced to move through trauma, somehow, like nothing has happened, no damage has been done and no healing has ever been needed. “Lemonade” rejects that. Beyoncé uses her platform to encourage black women to accept that bottling our emotions won’t help us get free. Instead, she’s insisting that we take time and release our pain, so it no longer burdens us.