"Game of Thrones" recap: More like "Game of Crones" — and the show finally discovers its true heroes 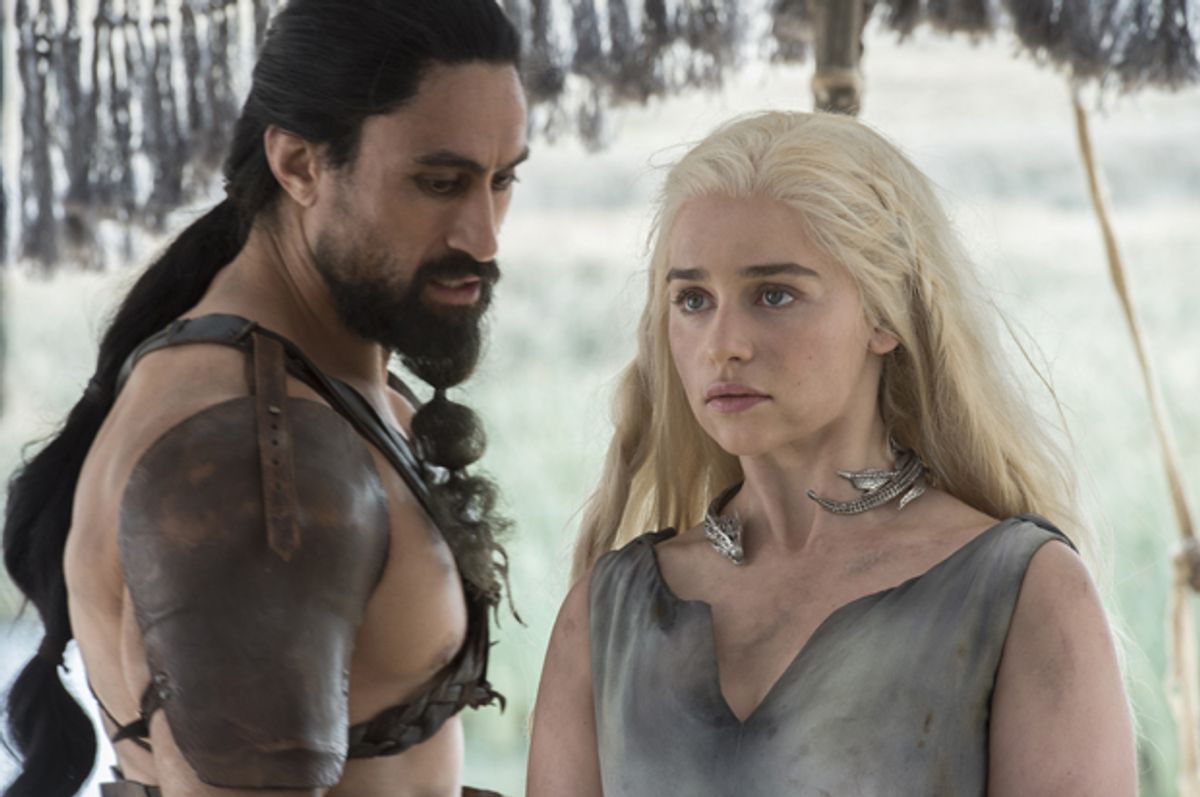 Joe Naufahu and Emilia Clarke in "Game of Thrones" (HBO)
--

The following is a recap of the season 6 premiere of "Game of Thrones," and it contains spoilers galore.

The end of last night’s season six premiere of “Game Of Thrones,” which featured Melisandre (Carice Van Houten) taking off her magical choker to reveal her real, aged body underneath, provides the audience at home with a naked body of a type not seen often by any television audience—that of a naked elderly woman. Melisandre is not even just elderly; she is ancient, a hollowed out near-corpse that is being kept alive just by the fiery magic of the Lord of Light and her own hectic willpower.

To quote BuzzFeed’s Rachel Sanders—“the most horrifying reveal the GoT writers can imagine is saggy boobs”—this is an encapsulation of how silly “Game of Thrones” can be when pitching its revelatory moments at the viewer. But I also found it to be an intriguing twist. It’s easy to make jokes about an old naked woman, but seeing Melisandre unmasked and unglamored is to see her truly undone, too. Her visions appear to have been lying to her; her Azor Ahai reborn is now dead. And this mortal coil that she has augmented, with a kind of magical cosmetic surgery, to continue getting her way with the men of this world, is now just sad evidence of her ultimate hollowness. The maiden is really a crone, the witch is really a witch, and beauty is an illusion that serves a pointed end; “Game Of Thrones” would like to remind you that it is no fairy tale.

Last night I wrote about how “Game Of Thrones” is a bit hamstrung by its age and its place on HBO in the current TV landscape; younger shows have had a chance to innovate and expand the notion of “prestige drama,” but “Game Of Thrones” has a subscriber base to keep happy and a network to keep profitable. But last night’s premiere, “The Red Woman,” suggests a lot more nuanced self-examination than I was expecting. Transforming an objectively hot woman into an objectively non-hot one is a cheeky dig at “Game Of Thrones” own penchant for boobs and the audience’s lowest expectations for the show’s interest. It’s not like the camera’s implied male gaze has been usurped overnight, or anything, but “The Red Woman” managed to surprise me, and that fact in itself also surprised me.

Vox Culture Editor Todd VanDerWerff joked on Twitter, “That was the #GameofThrones homage to the #BanMen hashtag,” and I concur—insofar as “Game Of Thrones” would really go so far as to devote an episode to the controversial (but internet-popular) notion of misandry, this is as close as it has ever gotten. Nearly every on-screen death was a man killed at the hand of a woman; the most regal figure in the episode is a terrorized girl on the run taking the oath of fealty from Westeros’ only lady-knight; and currently, two of our male protagonists are not in possession of their penises, but still capable of heroics. Jon Snow, betrayed by his own men at Castle Black, is still dead.

“Game Of Thrones” may or may not be castrating its own patriarchy, albeit with mixed results—Daenerys (Emilia Clarke) is, after all, imprisoned by a set of men who want to impose the role of widowhood on her, and two apparently intact men are riding on horseback to rescue her, or something. But it is probably significant that Queen Cersei (Lena Headey)’s main champion now is not her erstwhile faithless brother (Nikolaj Coster-Waldau) but a man that was literally created in the Westeros version of a science lab—a monstrous exaggeration of ideal masculinity, a hollow man in a suit of shining armor.

If you forgot about him, that’s Robert Strong—the reanimated corpse of Gregor Clegane, the Mountain That Rides, who we spotted at the very end of the season five finale, “Mother’s Mercy.” (The promo for next week’s episode promises more Robert Strong quite soon.) But that’s a reminder of something else intriguing about this premiere. “Game Of Thrones” premieres are often a bit anticlimactic because there are just so many plot threads to locate and stitch together. “The Red Woman” had some of the same issues, but then determined to resolve its problems by just killing off a whole bunch of loose ends.

The Dorne storyline that seemed superfluous and longwinded even in the original books, for example, came to a kind of astonishing halt last night, as Ellaria Sand (Indira Varma) masterminded the execution of the Prince of Dorne, Doran Martell (Alexander Siddig, who it will be a real shame to see go) and his son Trystane. In the books, Doran’s alive, and he has a daughter Arianne who is a major player in the machinations for the Iron Throne.

The upshot is that the show has decided to lob the televisual equivalent of a “fuck it, why not?” shrug at its source material, and it’s both exhilarating and a little worrying. Showrunners David Benioff and D.B. Weiss have been beholden to convoluted, inconclusive source material for a long time, so it’s hard to blame them for wanting to quickly resolve some dangling plot elements in a subplot no one seemed to enjoy. But by swiftly executing a lot of Dorne, the show undercuts its own careful build to payoff in seasons four and five; this viewer, at least, is left feeling a bit perplexed by the sudden turn of events. I’ve tried to speculate where this story goes from here with some colleagues who are also book readers, but it’s hard to square what we already know about the world of Westeros with what just happened in Dorne.

But in thinking both about tossing some of the book’s unfinished stories out the window and about “Game Of Thrones” attempt to twist its own established cinematic language to different ends with Melisandre’s old-lady boobs, one scene stands out as a real triumph of both of these ends—the one where Brienne (Gwendoline Christie) swears her sword to Sansa Stark (Sophie Turner)—who is, for all intents and purposes, the Queen of the North. The moment is gorgeously shot; with Brienne on her knees in deference, Sansa is by contrast tall and regal, framed in near-silhouette against the driving snow and coming night. (Winter is coming, I hear.) Sansa has probably never expected to repeat the words of sworn sword that her father so often intoned; that was never supposed to be her job. Faithful Podrick (Daniel Portman) helps her along, creating a vivid little portrait of two young people forced to grow up very quickly.

All on its own, Sansa coming into her own makes so much of the long journey of “Game Of Thrones” feel worth it. This is a character that was raped just weeks ago, in the timeline of the show; over the course of the seasons we’ve seen her brutalized, traumatized, and terrorized by any number of tyrants and lordlings. To see this young woman step into the tentative but rightful role of royalty is both frightening and incredibly validating; it feels like she has finally come to value herself, even when so few others around her will grant her dignity. It could be entirely possible that Sansa is just placating the very tall woman with a sword who seems to keep following her around; but even then, seeing Sansa become what she needs to in order to survive is a painfully beautiful narrative of growth in a story that kills more characters than it saves.

Sansa’s claiming of her power is the opposite of the episode's final moment, where Melisandre is putting her power aside, if only for the night. Neither woman is quite what they appear to be, and both appear to be exactly what the men around them would like them to be. Over the last several seasons, Sansa is made to be the dutiful daughter or wife, concerned with embroidery and lemon squares; Melisandre is the smoldering temptress, a tantalizingly deadly sex symbol for almost every man she meets.

One of the show's other chameleon-like women, Margaery Tyrell (Natalie Dormer), is briefly featured in this episode, sitting unchastened in a filthy prison cell. She is being read the precepts of the faith of the Seven by a stern septa, when we first spot her, because the show is reminding us that a good portion of Westeros’ population lives under the notion that a Mother, a Maiden, and a Crone watches over all of them.

The notion of a maiden masquerading as a crone, or a crone masquerading as a maiden, is already common one in our own fairy tales and mythology. In Westeros, it is not just archetype, it is scripture. One passing for the other suggests a kind of transgression; the maiden promises innocence, while the crone promises threatening, hard-earned knowledge.

But that implies that there is much of a difference at all between maidens and crones. In this same episode, “The Red Woman” undercuts that very hegemony; both because so many of its characters pray to other gods—such as the old gods, or R’hllor—and because so few of its surviving characters fit any of those comfortable molds. The Seven gods include a male Knight, but Brienne is the only knight around. Arya (Maisie Williams), with singleminded dedication, is turning herself into a young-girl version of the faceless, terrifying Stranger. Fathers like Stannis (Stephen Dillane) and Ned Stark (Sean Bean) are dead, having endangered their own children in the process. And if Melisandre is a Mother at all, it is only to horrible shadow-creatures that kill in the dead of the night.

In the remains of what they were told the world is supposed to be, at least some of the characters are prepared to try something new. With Brienne, Podrick, and the somewhat reborn Theon (Alfie Allen) standing in attendance to Sansa—and assisting her with her new mantle, when she struggles to uphold it properly—“The Red Woman” has given us a ragged little confederacy of mostly broken people who might be able to carve out some sanity in this cruel universe. It also offers a little snapshot of a different kind of Westeros, which is quite the opposite of a fairy tale ending.

In many ways, this episode was just some necessary tablesetting for what will be a legacy-defining season for the show. The precarious state of women, the uncomfortable racial politics, and the convoluted feudalistic hierarchy of Westeros remains intact, as does the show’s struggles with exposition, character-building, and scene-setting over what is an ever-increasing swath of universe. But I’m intrigued by what Benioff and Weiss are narrating about this world’s mythos of masculinity, in this sixth season; I am interested that they seem to realize who their narrative’s true heroes are. There’s a moment when Sansa is about to start speaking to Brienne that she nervously looks over to Theon for advice or approval, and Theon just stands there, as solidly as a mostly broken man can—offering no mansplaining, no usurpation, no ego-driven assertions of authority. Earlier in the episode, for the first time after months of torture, Theon picked up a sword again, and drove it through an assailant’s torso; it is a not-so-subtle reclaiming of power, or identity, or even just manhood.

Standing by Sansa and Brienne and Podrick, he is not Reek, but nor is the Theon of old, who was so consumed by the weight of expectation and tradition that he destroyed his own life and the life of the only family that loved him. If Sansa’s little kingdom of four, standing in the snow, is a taste of Westeros’ future, Theon’s unmade and remade masculinity might be the show’s future of men.