Bernie's biggest Hollywood supporter said the Sanders campaign, like Lewinsky, is being bullied by Hillary Clinton 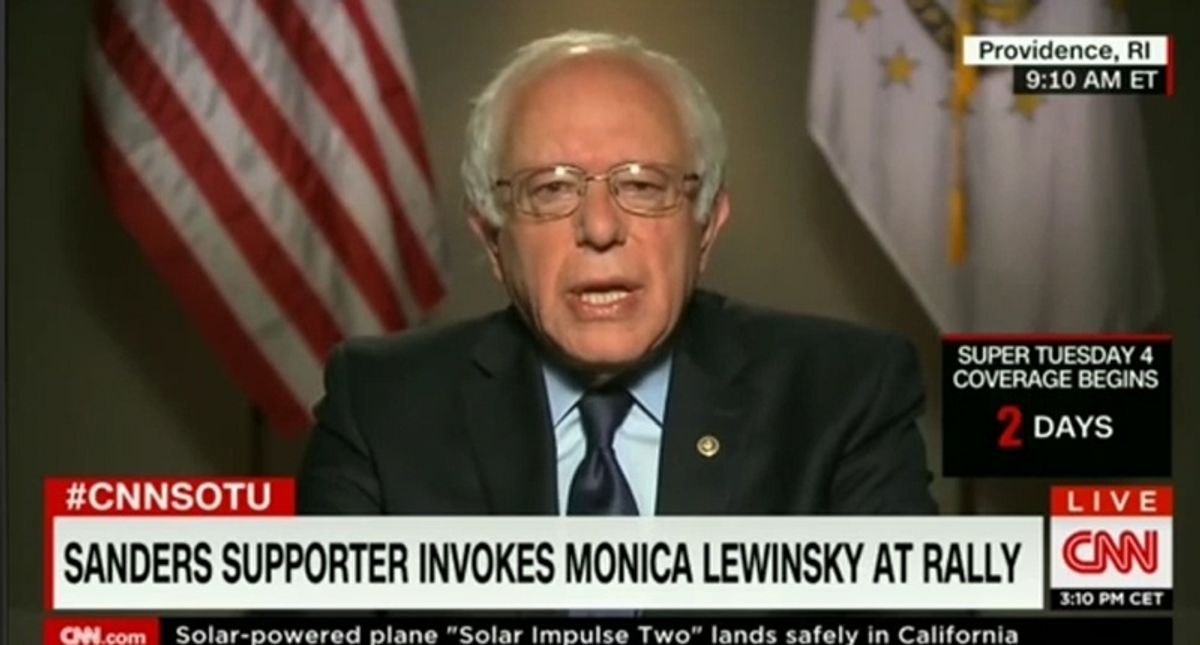 Bernie Sanders has repeatedly said he is committed to battling Hillary Clinton for the Democratic presidential nomination to the very end, insisting that all future attacks will be policy based, but now one of his most active Hollywood supporters is invoking Monica Lewinsky to accuse Clinton of bullying the Sanders campaign.

"We are literally under attack for not just supporting the other candidate," actress and top Sanders surrogate Rosario Dawson said at a Sanders campaign rally in Wilmington, Delaware, on Saturday. “Now, I’m with Monica Lewinsky with this," she continued, invoking the infamous White House intern. "Bullying is bad. She has actually dedicated her life now to talking about that. And now, as a campaign strategy, we are being bullied, and, somehow that is O.K. and not being talked about with the richness that it needs”:

In recent years, Lewinsky has become an activist speaking out against cyber-bullying, publicly addressing her own experience with online harassment in a TED talk last year.

Asked about Dawson's comments on CNN's "State of the Union" Sunday, Sanders struggled to explain what Dawson was suggesting.

“One of your high-profile surrogates, actress Rosario Dawson, invoked Monica Lewinsky at one of your rallies,” host Jake Tapper said to the Vermont senator. “Do you think it’s appropriate for your surrogates to be talking about Monica Lewinsky on the campaign trail?”

“We have many, many — Rosario is a great actress, and she's doing a great job for us," Sanders initially replied. "And she's been a passionate fighter to see that we see the increase voter turnout, that we fight for racial, economic, environmental justice."

“But, yes or no," Tapper pressed, "Should your surrogates be talking about Monica Lewinsky?”

“I have no idea in what context Rosario was talking about her," Sanders admitted. "But I would hope that all of our people focus on the real issues facing working people and the massive level of income and wealth inequality that we have.”

“What our job, right now, is to contrast our views compared to Secretary Clinton. That’s what a campaign is about,” he continued before adding that campaigns shouldn’t be about “personal attacks.”

A spokesperson for the Clinton campaign, later told CNN that their campaign would “absolutely not” address Dawson’s comments. “You could ask the Sanders campaign why they encourage this vitriol in the vicinity of their candidate by staying silent,” Nick Merrill  told CNN.

Campaigning in Connecticut the next day, Sanders continued his attack on Clinton, focusing on her reliance on campaign contributions from Wall Street. "This campaign, unlike Secretary Clinton's, has not raised $15 million from Wall Street and millions more from other special interests. This candidate has not given speeches behind closed doors on Wall Street for [$225,000 a speech]."

Sanders also went after the state's Democratic governor, Dan Malloy, who was an early endorser of Clinton's. "I'm not sure why your governor has cut mental health services in the state," he remarked to the crowd of thousands.