Maybe Donald Trump has really lost his mind: What if the GOP frontrunner isn't crazy, but simply not well?

We've become familiar with his ramblings, and at ease mocking them. But they might be the sign of someone unwell 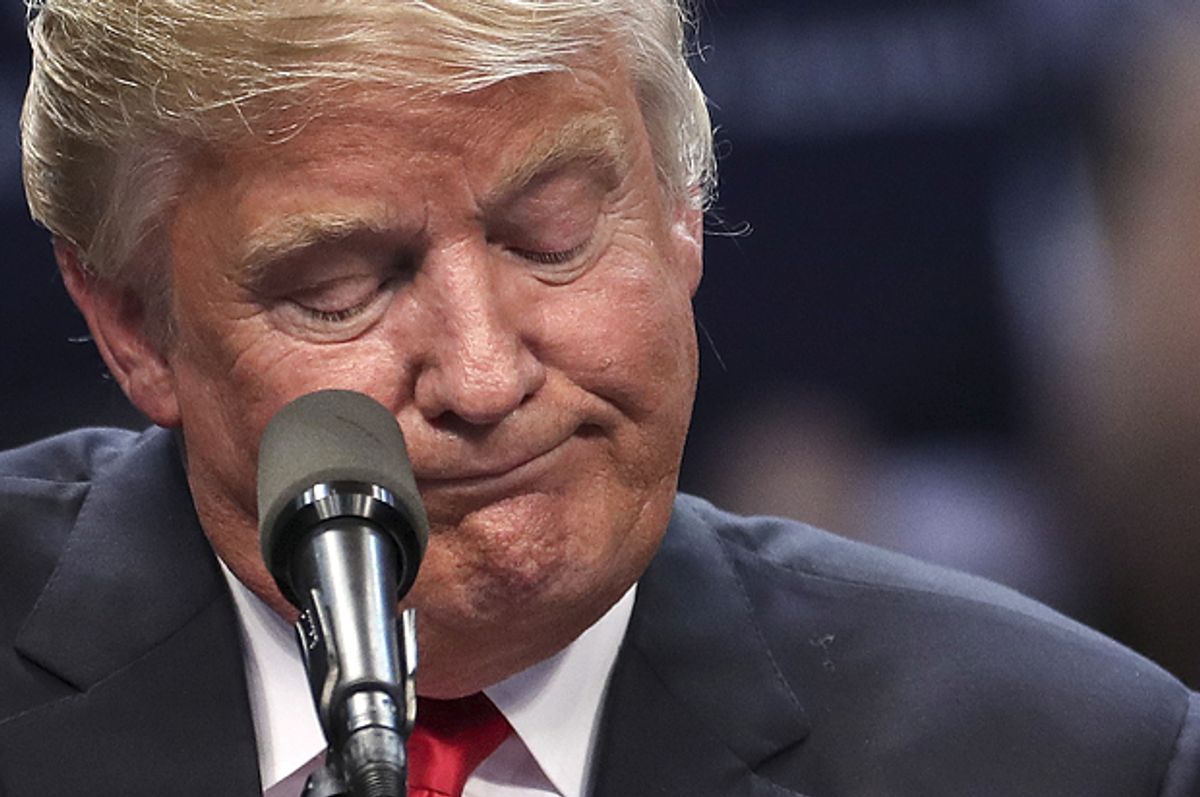 The Donald Trump gaffe track keeps playing. The GOP frontrunner seems to literally spew out a doozy almost daily.  Campaigning in Pittsburgh, he recently blathered, “How’s Joe Paterno? We gonna bring that back? Right? How about that—how about that whole deal?”  While his campaign suggested he was referring to the former Penn State football coach’s statue, it was hard to shake the sense that Trump was unaware that Paterno died in 2012 and that Pittsburgh has no direct tie to the sports program at Penn State, which is located three hours east.

Then there was the time that Sean Hannity asked Trump which government agencies Trump would shut down, “The Department of Environmental,” Trump replied.  That exact sort of gaffe killed Rick Perry’s entire campaign, but despite some biting Stephen Colbert mockery, the mistake hasn’t seemed to hurt Trump at all. He won New York despite suggesting September 11 happened on 7/11.

But here’s the thing, the Trump campaign seems to be filled with more than just gaffes.  Channeling his inner Sarah Palin, Trump’s rants often seem to lose any connection with reality at all.  Take the example of Trump’s interview with the Washington Post editorial board in March. During that exchange one of the editors asked Trump if he would consider using a tactical nuclear weapon against ISIS.

TRUMP: I don’t want to use, I don’t want to start the process of nuclear. Remember the one thing that everybody has said, I’m a counterpuncher. Rubio hit me. Bush hit me. When I said low energy, he’s a low-energy individual, he hit me first. I spent, by the way, he spent 18 million dollars’ worth of negative ads on me. That’s putting [MUFFLED]…

RYAN: This is about ISIS. You would not use a tactical nuclear weapon against ISIS?

TRUMP: I’ll tell you one thing, this is a very good-looking group of people here.  Could I just go around so I know who the hell I’m talking to?

We have become so accustomed to these sorts of ramblings that we don’t really register them as anything more than standard nonsensical Trump-speak—a pattern of speech we have seen crop up across the GOP in recent years, most notably in Palin's gibberish.  But I urge you to re-read the exchange above and register the range of nonsense—the lack of basic grammar, the odd syntax, the abrupt shift in topic, the disconnect from reality, the paranoia, and the seeming inability to even grasp the question.

As we scratch our heads and wonder how someone who says and does such things can still be a frontrunner, I want to throw out a concern. What if Trump isn't "crazy" but is actually not well instead? To put it differently: what if his campaign isn't a sign of a savvy politician channeling Tea Party political rhetoric and reality TV sound bites? What if it's an example of someone who doesn't have full command of his faculties?

We've watched both Bernie Sanders and Hillary Clinton come under fire for potentially being unfit medically to run, but have we wondered enough about Trump? There is far more media coverage about Clinton’s health at 68 than Trump’s at 69.

There could be a good reason why. At times it can be very hard to distinguish between extreme right-wing politics and symptoms of dementia. The Alzheimer’s Association tells us that if two of the following core mental functions seem impaired then it is time to seek medical help: Memory, communication and language, ability to focus and pay attention, reasoning and judgment, visual perception.  Alzheimer’s carries other symptoms besides memory loss including difficulty remembering newly learned information, disorientation, mood and behavior changes; deepening confusion about events, time and place; unfounded suspicions about family, friends and professional caregivers; more serious memory loss and behavior changes.

Scholars of the recent trends in GOP politics point to some of the very same tendencies happening across the extreme right-wing faction of the party. (See this and this for example.)

Much to the chagrin of the reasonable conservatives who wonder what has happened to their party, it is now often difficult to distinguish Republican rhetoric from the ravings of someone suffering from diminished mental capacity.

The first time I wondered at something being not quite right with Trump’s brain was during the first debate in August 2015 when Trump said “We need brain in this country to turn it around.” Even my 10-year-old son noted that Trump had suggested we need intelligence in government in a really stupid way.  But it was more than stupid; it was ungrammatical.  It wasn’t simply a basic use of language; it lacked the grammar structure that even a third grader has readily available.  And for all of the ease with which we Trump bash, it’s worth remembering that he did, in fact, graduate from Wharton as an undergraduate in economics. He might have been full of bluster back then, but I’m guessing he still could speak in a complete sentence.

The next real warning sign was the doctor letter Trump trotted out to show that he was in fine shape.  The Daily Beast jokingly said that the letter was more insane than Trump’s campaign.  But, at the time, no one expected him to still be the frontrunner today.  I urge you to take a look and re-read the letter now.

One might wonder how a physician could mess up the phrase “to whom it may concern” and not be asked for a revision from the Trump team, but the really disturbing tells are the reference to “positive” results (which in medicine means actually finding an ailment) and Trump being the “healthiest individual ever elected to the presidency” (a statement that can’t be proven).

Last October, Death and Taxes ran a piece wondering if Trump had dementia.  They pointed to the fact that Trump’s father, Fred, was diagnosed with Alzheimer’s six years prior to his death.  They also highlighted Trump’s aggressive late-night tweets, his childish behavior, his name-calling and mood swings.  They explained that it would be really easy for Trump take some tests and prove that he is mentally fit. “Because if Trump can prove he’s not suffering from a degenerative neurological disorder that has left him with a damaged mind devoid of all shame or self-awareness, he might just be an asshole.”

Now it may seem like I'm taking this in a flip manner and not respecting the real health challenges that face those that suffer these ailments.  But that's actually my point.  I need to be reassured that Trump is indeed OK so that the jokes about him remain funny. Public mockery has been the only way to stay balanced this election. And, of course, the best jokes about Trump have come from political satirists because satire does more than poke fun. It encourages critical thinking in the face of blind acceptance. It doesn't just make Trump look silly and stupid; it points out that he's dangerous to democracy. It's the difference between jokes about his orange face and jokes about his demagoguery.

One excellent example was John Oliver’s brilliant piece on Trump that ended by outing that Trump’s name had originally been Drumpf—a truth that was extremely ironic since Trump himself likes to mock others for their names.  In the bit Oliver called Trump a "serial liar," who had "a string of broken business ventures and the support of a former Klan leader, who he can't decide whether or not to condemn."  It was Oliver’s most watched segment from “Last Week Tonight.” But it’s not funny if Trump really can’t actually remember his family history, his business past, or who David Duke is.

Satirical humor only works if it is punching up.  Humor that punches down is just mean.  A joke about Trump’s brain is amusing; one about an Alzheimer’s patient is twisted and cruel.

There are countless other excellent examples of Trump comedy takedowns—all of which depend entirely on the idea that Trump is not someone who actually needs medical attention.  For more, see these examples from Larry Wilmore, Samantha Bee and Stephen Colbert.

Lee Camp’s Redacted Tonight reminded viewers that Trump speaks at a fourth grade level.  That makes him, according to Camp, scientifically proven to be the dumbest candidate of them all. But Camp’s joke is only funny if Trump is talking that way to attract voters who respond to his simplistic rhetoric. It's not funny if he really has lost the ability to speak like a healthy adult.