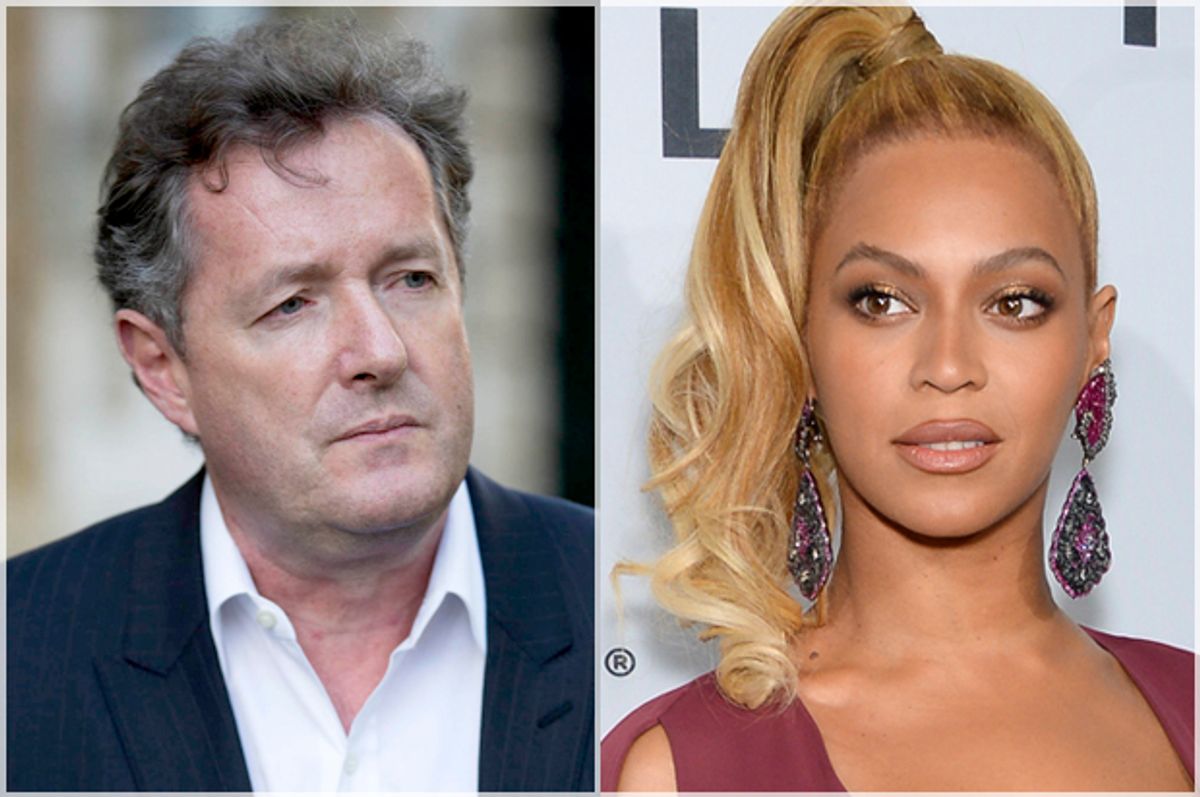 Attention, wannabes: Piers Morgan this Monday has been offering a master class in How to Be Piers Morgan, Beyoncé Edition. Want to learn how he does it? Just follow these easy steps and you too can a be former Fleet Street hack and full-time Internet troll!

Step 1: Fire a warning shot to create buzz, in this case, in the form of a tweet promising, "My new @DailyMail column is about militant @Beyonce. Posting soon." Then, both modestly and prophetically, retweet someone else predicting that you "will start trending the moment he drops that column."

After all, what better form of validation, especially if you're not a celebrity named Rachel, than trending on Twitter?

Step 2: Keep blowing on the embers, reminding, just minutes later, something like, "Posting imminently: My column on new, militant @Beyonce." Can't you feel the e-x-c-i-t-e-m-e-n-t building?

Step 3: Channel your inner Real Housewife and make it clear you're ready for some table upturning, pinot-in-the-face-tossing drama here. If you're Morgan, do it the form of a subtle, "Oh-oh, the Bey-hive is coming for me hard & I haven't even posted my @Beyonce column yet…" or a "Bring it on, Bey-Hive." Add some RTs like, "Twitter has about 20 minutes before we ritually drag Piers Morgan again. Make sure you've cleared your calendar." Turn your rings around and ask a friend to hold your purse, because it's about to get real.

Step 4: Drop those truth bombs! Because you are a real journalist whose opinions command respect, do it in the Daily Mail.

Step 5: Be upfront about your own personal aversions, with an opener like "I never like it when entertainers go all political." Display no self-awareness of how much of our culture regularly caters to the comfort levels wealthy, middle-aged white men.

Step 6: Explain, like those aliens in "Stardust Memories" who tell Woody Allen, "We enjoy your films, particularly the early funny ones," that you have all kinds of respect for the person you're currently trying to stir up beef with. Say stuff like "I bow to no man nor woman when it comes to my admiration" and speak fondly of how the person "has generally steered studiously clear of saying or doing anything too contentious which might polarize that audience – preferring to entertain for the sake of entertaining."

Step 7: Express disappointment that said person's work currently doesn't speak directly to your experience as a middle aged white man. Be sad about things like a Super Bowl halftime show that had, in your words, a "police-hating theme," and concern-troll the appearances of Mike Brown, Eric Garner, and Trayvon Martin's mothers in the "Lemonade" video project, because it "smacks of shameless exploitation."

End on a scolding note, something like, "The new Beyoncé wants to be seen as a black woman political activist first and foremost, entertainer and musician second. I still think she’s a wonderful singer and performer, and some of the music on Lemonade is fantastic. But I have to be honest, I preferred the old Beyoncé. The less inflammatory, agitating one."

If you seek further examples, I recommend every reaction to a well-known woman speaking and behaving in a non-submissive manner in public.

Whether you're a Piers Morgan or a Piers Morgan-in-training, you of course have as much right to an opinion about Beyoncé as the next Internet blowhard. You have a right to be confused and offended when a successful black woman decides to use her platform to call attention to racism and social justice issues instead of just demanding somebody put a ring on it. Just be prepared for:

Step 9: Once again, find your opinions about how you expect grown women to behave rendered thoroughly meaningless.