“We all have our flaws, but Dennis Hastert has very few," wrote former House Majority Leader Tom DeLay 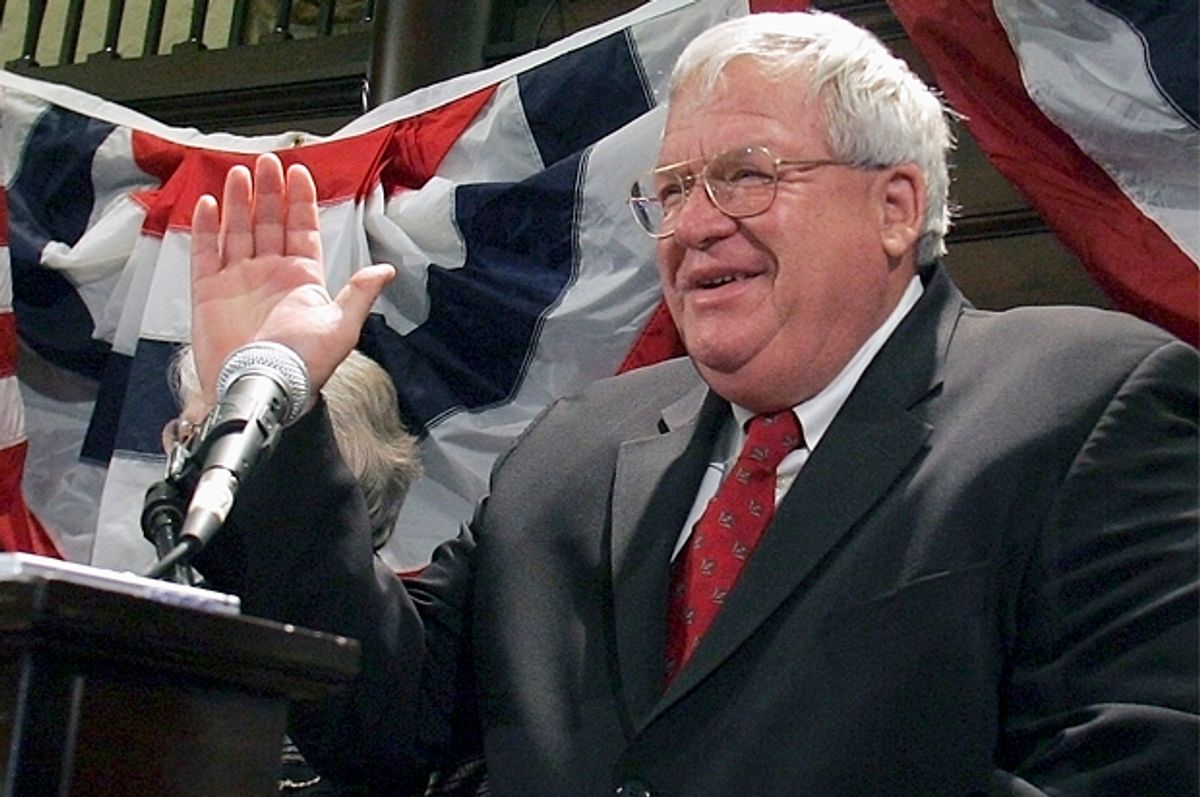 On Wednesday, former Republican U.S. House speaker Dennis Hastert will be sentenced for his part in an elaborate hush money scheme to cover up his years long molestation of teenage boys while he was a Illinois high school wrestling coach from 1965 until 1981. But if his fellow Republicans have their way -- he won't see a minute of prison time.

According to federal prosecutors, Hastert “made payments to a man who was sexually abused at age 14 by Hastert when he was the boy’s wrestling coach. Prosecutors said the abuse also involved ‘other minors,’ and included touching their genitals or engaging in oral sex.” Court filings in Hastert's case highlighted “private one-on-one encounters in an empty locker room and a motel room with minors that violated the special trust between those young boys and their coach.”

The Republican firebrand is charged with lying to FBI investigators about a tax-evading scheme to pay $3.5 million to keep at least one former student quiet about the abuse before falsely accusing the man of trying to extort him. Hastert pleaded guilty to illegally structuring $900,000 used as hush money to the one individual, a violation of banking laws. Prosecutors are now seeking the harshest possible penalty, asking that the 74-year-old Hastert be sentenced to six months in prison while his attorneys are asking for probation. A former wrestler who said Hastert abused him decades ago is expected to speak at Hastert's sentencing hearing on Wednesday.

Still, the longest serving Republican House Speaker in American history has prominent Republican friends rushing to publicly back him even as he's accused of being a serial child molester.

A list of the names of people who wrote to support Hastert was made public in court Friday, complete with over 40 letters of support for Hastert from the likes of former House Majority Leader Tom DeLay and the head wresting coach of the University of Chicago. Hastert's defense team said he had received more than 60 letters of support for Hastert in recent months, but nearly 20 writers did not want their letters made public or had requested their letters be "withdrawn" from consideration after disturbing details of Hastert's pedophilia emerged. (The Chicago Tribune published all of the letters released, and they may be found here):

Hastert's supporters included a handful of former national and state politicians as well as local leaders, board members, police officers and others from his home base in rural Kendall County.

“We all have our flaws, but Dennis Hastert has very few," DeLay wrote in his defense of Hastert. "He is a good man that loves the Lord."

"He doesn't deserve what he is going through," the Texas Republican who served as majority leader under Hastert in the early 2000s and who ran into his own legal problems argued. "I ask that you consider the man that is before you and give him leniency where you can."

DeLay detailed their relationship of nearly three decades, 12 years of which they spent working “side by side.”

“I have observed him in many different and difficult situations,” Delay explained. “He has never disappointed me in any way. He is a man of strong faith that guides him. He is a man of great integrity. He loves and respects his fellow man. I have never witnessed a time when he was unkind to anyone. He is always giving to others and helping anyone including me so many times."

“We held each other accountable and we studied God's word and applied it to where we were at that moment," DeLay's letter continued. “Nothing could have been more intimate between us. So I know his heart and have seen it up close and personal.”

"Denny Hastert and I were as close as brothers, sharing our goals, ambitions, and our family life, both the ups and the downs," Ewing wrote, noting that they lived together in Washington D.C. and Springfield, Illinois. "I know him as a man of faith, integrity and honesty. He was an extremely hard worker, always willing to extend a helping hand to others.

Goss, a former head of the CIA, invoked 9/11 to defend Hastert, recalling his "calmness, steady confidence and quick comprehension of the magnitude of events."

"Perhaps, the Speakers greatest gift to the House was trust," wrote Goss. "My belief is that Members found him very approachable and took him at his word. I know many viewed him as 'Mr. Main Street, America'-a rock solid guy with center of the country values," he wrote.

As the New York Times reported over last week, Hastert's work on Capitol Hill allowed him the cover to keep secret his decades long abuse of boys:

Mr. Hastert hired former wrestlers as top aides. For more than a decade, he used clout in Congress to fight Title IX, the landmark federal law that requires equitable opportunities for men and women to participate in college sports, arguing that it was hurting wrestling by forcing cutbacks. He used campaign funds to support wrestling causes. He intervened in a dozen cases to try to save college wrestling programs.

Writing in his defense for at least the second time in recent years, University of Chicago head wrestling coach Leo Kocher called Hastert an "outstanding human being."

Tyrone Fahner, a former Illinois attorney general, called Hastert "a kind, strong, principled, and unselfish man," and asked the court "to permit him to live the rest of his life in freedom with his family and friends, and all those who love and admire him."

Shortly after Hastert was indicted on federal charges in 2015, Politico dug through the former speaker's archive and found he kept a file in his office titled “Homosexuals” that reportedly was “filled with policy statements from social conservative groups like the Traditional Values Coalition and the Family Research Council that criticized same-sex marriage and Clinton administration efforts to prevent discrimination against gays and lesbians” and included a rambling 1996 National Review column, “Pedophilia Chic,” warning of  “hip” and “sophisticated” liberal media outlets who give “pedophiles a place at the table” and put in a “good word for Nambla.”