He won't be president, but the Vermont senator has revived the best progressive traditions of the Democratic Party 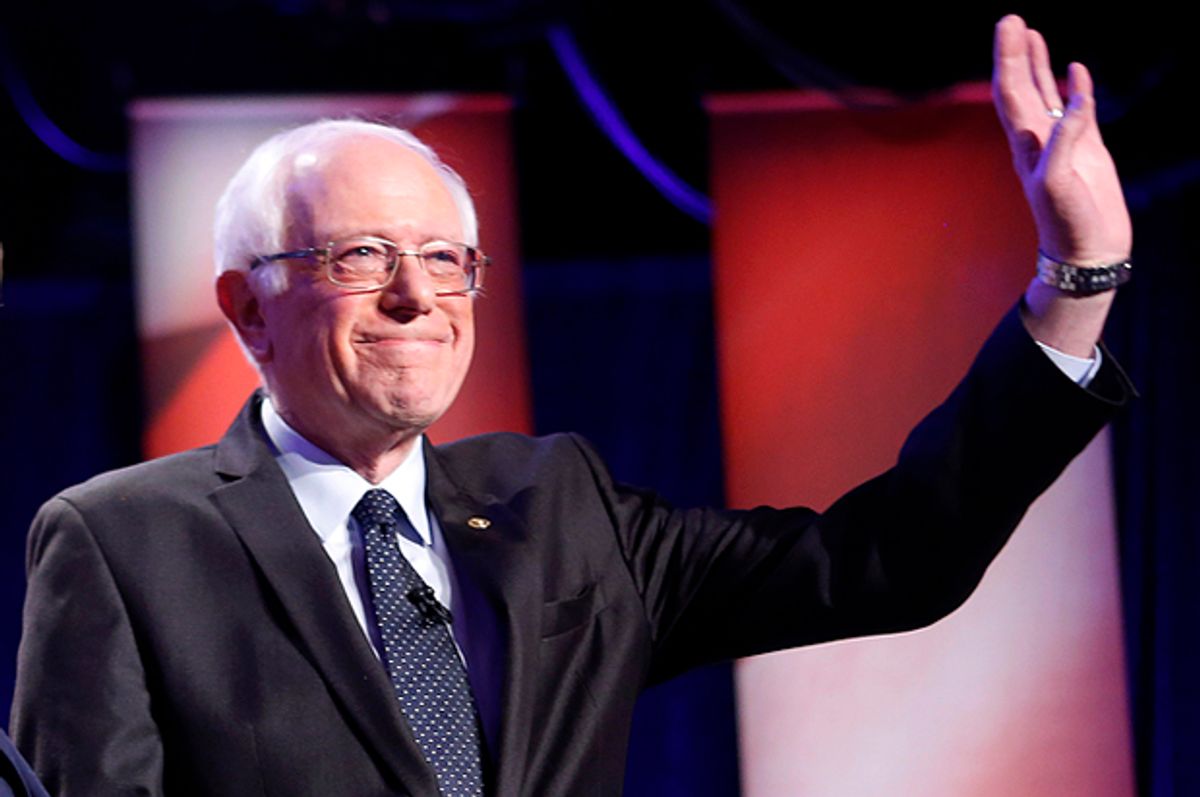 When Bernie Sanders launched his presidential campaign a year ago with a brazen call for an American revolution in politics, economics and social justice, no one, not even the candidate himself, could have imagined what the campaign would bring.

“The media likes to portray this as a fair fight on even footing,” campaign manager Jeff Weaver said last week. “They seem to forget that when we started our campaign on April 30, we barely registered in the polls. We didn’t have a political organization. We didn’t have millionaires waiting in the wings. Quite frankly, we didn’t have a whole lot. And then millions of people came together in a political revolution.”

Sanders hasn’t just climbed from a 55-point deficit in national polls to being just 1.4 percent behind Hillary Clinton (who, counting her husband's, is waging her fourth presidential campaign); he has fundamentally changed the national political landscape for the better by reviving the very best progressive traditions and principles within the Democratic Party.

1. Revived Democrats' progressive wing. Starting in the 1990s, before Bill Clinton was elected president, the Democratic Party leadership made a concrete choice to trade Main Street for Wall Street. You saw it in its national fundraising apparatus. You saw it in the bills pushed through Congress, like the North American Free Trade Agreement, and backtracking on social justice issues, such as punitive welfare reform and criminal sentencing laws. Sanders has flipped that script, railing against American oligarchs and resurrecting the New Deal economic agenda of Franklin D. Roosevelt and the Great Society safety net priorities of Lyndon Johnson. He’s sparked a wholesale revival of the Democratic Party’s progressive wing and heritage.

2. Introduced a new generation to progressive politics. Sanders' overwhelming support from people under 45 is not just remarkable, it’s been extraordinarily instructive. Sanders' followers, who keep showing up at his rallies by the tens of thousands, have memorized his speeches, know his punchlines and recite them as if they are singing along at a concert. But these aren’t pop lyrics, they’re fundamental ideas, analyses and remedies for a more just political system and society. That’s unprecedented for any presidential candidate of either major party in recent memory.

3. Stopped socialist from being a dirty word. No one has to be reminded that being called a socialist by the mainstream media or defending socialism in the political system has, for years, been a kiss of death—even if recent polls find public attitudes changing. Sanders has rebranded the word in the American public’s mind, so it simply means greater democratic participation and sharing of economic rights and responsibilities. Among young people in college and in their 20s, polls last fall found majorities had a more favorable view of socialism than capitalism.

4. Showed grassroots, small-donor campaigns are viable. Sanders’ small-donor fundraising has been nothing if not remarkable, raising $182 million in the last year, according to analyses of federal campaign finance reports—the same sum as Clinton, though she had a $30 million headstart. He wasn’t the first presidential candidate to tap the power of small donations—Howard Dean did it and so did Jerry Brown—but Sanders has inspired millions of people across America who are averaging under $30 a pop. That’s come as the country has seen political campaigns dominated by a handful of superwealthy individuals or billionaires backing super PACs, which he doesn’t have though the Clinton campaign does. That contrast alone is significant, but there’s more to it. His campaign has disproved many of the political establishment’s longstanding precepts: that an engaged citizenry won’t support candidates; that candidates have to pander to the rich to fund their campaigns; and that small-donor public financing systems aren’t sufficient when it comes to the political big leagues.

5. Showed the public responds to principled politicans. Sanders has defied the cliché that good people who enter politics will eventually be corrupted and compromised because they have to sell out along the way to win. He’s proven that a candidate and officeholder who has been principled and consistent and is honest and treats the public with integrity can succeed. In months of polls, the public has consistently said that Sanders is more trustworthy than either Clinton or Donald Trump. The public knows when they are being lied to or played for fools, and nobody running in 2016 has been as forthright, straightforward or honest as Sanders.

6. Showed it’s possible to run without throwing much mud. Until last week’s heated New York primary, where his composure was tested and frayed, he has run an issue-oriented campaign almost entirely devoid of personal attacks. Clinton supporters will take exception to that, but it’s true—how does one compare and contrast one’s values and judgments with their opponents, if they are in it to win, without saying that they believe they are better qualified? The larger point is that the 2016 Democratic nominating contest has been waged as a war of ideas, accompishments and temperament. Politics isn’t for the meek, but it doesn’t have to be all mud all the time like the GOP’s nominating contest, and Sanders has shown that in state after state.

7. Shown Democrats what an engaged citizenry looks like. From rallies attended by thousands and thousands to the remarkably energetic efforts of legions of his grassroots supporters, the Sanders campaign has vividly reminded the Democratic Party what an engaged base and electorate looks like. Moreover, that outpouring of enthusiasm reveals a fervent desire to take more radical stances on issues and solutions than what the party’s Washington-based establishment wants to admit or embrace. It also sets the expectation that a Democratic presidency and recaptured Congress had better seriously try to deliver a bold new agenda, if that’s the outcome in November.

8. Brought America’s progressive organizers together. Sanders has given other progressive-minded Democrats running in 2008 room to take anti-corporate stances, such as candidates endorsed by the Progressive Change Campaign Committee, Democracy for America, Working Families Party and others. He has also brought together the country’s progressive groups and the best organizers in the country, who have long worked on their issues in silos and are providing him with a fantastic campaign infrastructure. Democrats have typically relied on labor unions to provide needed volunteers. Labor is a big part of the Sanders campaign, but it’s part of a much wider coalition of like-minded people. That symbiosis is remarkable and raises the question of what will happen after the 2016 campaign concludes.

9. Pushed Hillary Clinton to the left. There is no doubt that Sanders has pushed the Democratic establishment’s heir apparent further to the left, making her take stronger and less ambiguous stances on many issues, such as promising not to roll back Social Security as part of any grand-bargain federal budget deal or new benefit-calculation formula. Should Clinton get the 2016 nomination, the open question is, how long will she stay to the left? He’s also made her a better candidate, forcing her to clarify and defend her positions, which she arguably might not do unless pressed by as vigorous a debater as Sanders.
10. Challenged everyone on free tuition. There are a number of issues where his agenda has put ideas and solutions before the country that mainstream political America hasn’t wanted to acknowledge or embrace. One is the need for public universities to be tuition-free, just as K-12 education is. As important, Sanders has proposed how to pay for that step, which is an increasing necessity in today’s global economy, by imposing a transaction tax on high-volume Wall Street traders. That kind of thinking, which would help millions of households, can no longer be called fringe.

11. Called out Wall Street’s purpose and business model. Everybody knows that Sanders is no friend of America’s largest corporations, which in field after field have near-monopoly control of goods, services and pricing. But he has especially gone after the financial sector, saying its business model is built on private greed and has a more than questionable public purpose. By identifying the culprits in decades-old wage stagnation and an undermining of the American middle and working classes, Sanders is reminding everyone that being in a democracy comes with rights and responsibilities, such as taking care of the vulnerable and pushing for racial and social justice.

12. Showed a Jew can call out Israel. For decades, American politicans, like a great many Jewish Americans, have faced great pressure never to criticize anything Israel does and reflexively to blame the Palestinians for the area’s ongoing violence. Sanders doesn’t make a big deal of his Jewish heritage—like many Jews, he is a living example of faith’s secular humanist tradition. Before the New York primary, he said that Israel’s military response to the last attacks from Gaza was unnecessary and disproportionate, prompting the ire of the Israel lobby. But his comments were cut from a larger foreign policy cloth that values restraint and prioritizes seeking political solutions.

A Revolution or New Normal?

Sanders supporters and political observers will surely cite more examples, but what stands out to progressives about many aspects of Sanders’ campaign and agenda is that what he is calling for isn’t revolutionary at all—it’s sane, and if anything, overdue. The passion and public purpose of his campaign has struck deep and wide notes precisely because of that. More than anything, Sanders has reminded vast swaths of the country that his democratic socialist agenda is exactly what they want America to be—a fairer and more dignified, tolerant, responsible and conscientious country. And he’s reminded the Democratic Party that its most engaged and visible base wants substantial change, even if those remedies seem radical to the Washington status quo.