A progressive in name only: Charles Koch joins a long list of right-wingers who have lauded Hillary Clinton

It's not just that some conservatives fear Donald Trump; many have been supporting Hillary for years 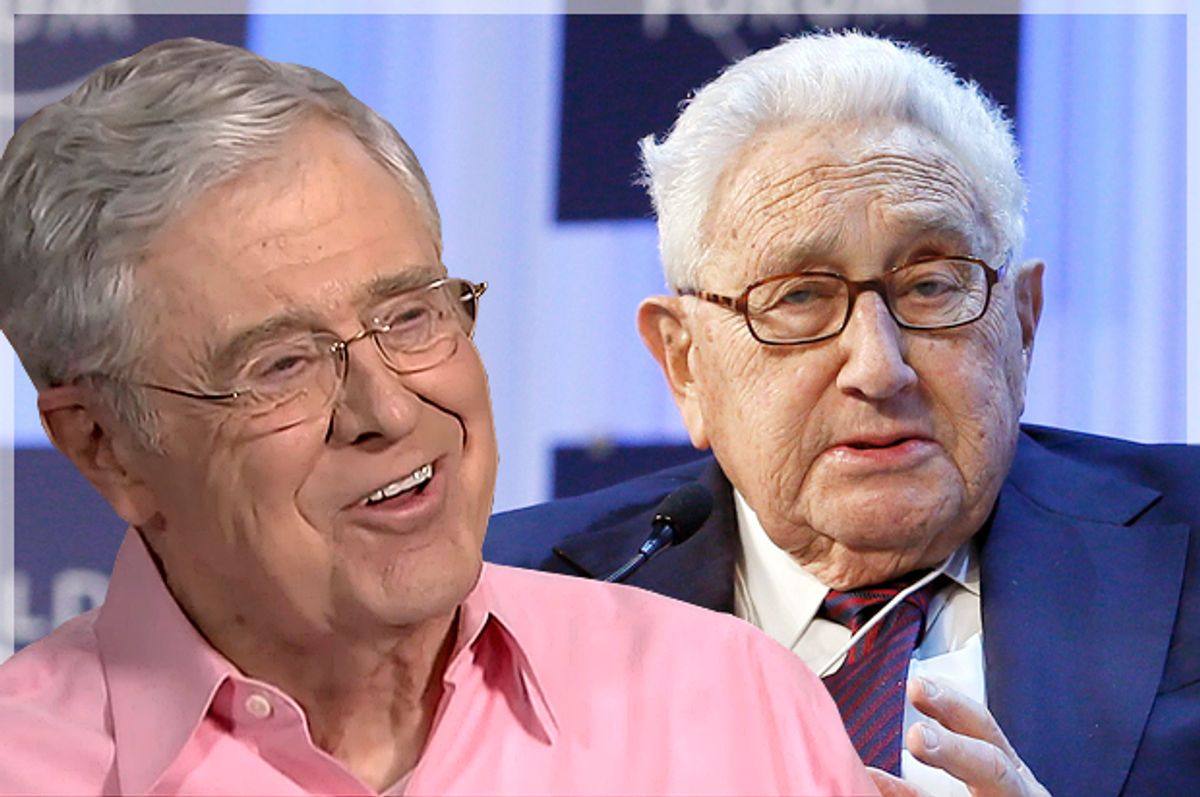 Billionaire industrialist and right-wing moneyman Charles Koch insisted in an interview this week that he could potentially support Democratic presidential candidate Hillary Clinton, speculating she could be a better commander in chief than her Republican counterparts.

This indirect endorsement is coming from one of the Koch Brothers, two of the richest human beings on the planet. The Kochs have for years used their enormous wealth to bankroll countless right-wing causes, from anti-tax activism to climate science denial.

Many liberal pundits were quite shocked at Koch's remarks, but an even cursory look at the historical record should quickly dispel any surprise. Clinton has long been a preferred candidate of much of the right wing — namely the pro-war right, which shares Clinton's extremely hawkish foreign policy.

Koch is not alone — not by any means. He joins a long list of right-wingers who have thrown their weight behind Clinton. Left-wing website In These Times compiled a list of leading conservative figures who have supported Clinton, in a piece titled "Neocon War Hawks Want Hillary Clinton Over Donald Trump. No Surprise — They’ve Always Backed Her."

Boot is a figure who openly supports "American imperialism" — no need to run away from the label, he maintains. "The greatest danger is that we won't use all of our power for fear of the 'I' word," Boot says.

The neocon Clinton backer ardently defends the idea of "American exceptionalism" and loudly cheerleaded for the illegal U.S. invasion of Iraq — and practically every war and military intervention since.

A Trump presidency, Boot warns, could threaten the U.S. empire he embraces; Clinton would ensure its longevity.

Robert Kagan, another prominent neocon who served as foreign policy adviser to Republican Sen. John McCain in his 2008 presidential campaign, has strongly come out in support of Clinton.

Historian Andrew Bacevich has described Kagan as "the neoconservative movement's chief foreign policy theorist." In his defense of Clinton, Kagan told the New York Times he is “comfortable with her on foreign policy.”

Neocon Richard Perle, an architect of the Iraq War, expressed great relief when Clinton was nominated for secretary of state in 2008, In These Times pointed out.

“There's not going to be as much change as we were led to believe,” Perle rejoiced, when he heard Obama was letting Hillary shape his foreign policy.

"I think she's very much in the mainstream. By now, I think the Bush foreign policy is, as a practical matter, the same policy as the policy of the Department of State — which is what I'd expect it to be under Hillary Clinton," he continued.

"Contrary to expectations, I don't think we would see a lot of change."

George Shultz, former Reagan-era secretary of state, stands beside a host of other conservatives who have expressed support for Clinton.

Even Lindsey Graham and John McCain have said good things about Hillary and her extreme hawkishness.

And Bush-era Secretary of State Condoleezza Rice declared that Clinton was "great."

Perhaps the most telling characterization came from right-wing writer Noemie Emery, who described Clinton as “The Great Right Hope” in 2008, In These Times noted. Emery triumphantly referred to Clinton as "the Warrior Queen, more Margaret Thatcher than Gloria Steinem."

Charles Koch joins this motley crew of right-wingers. Yet these are not all. Even more right-wing leaders can be added to the list of at least indirect Clinton supporters.

Salon exposed how emails released from Clinton’s State Department reveal her close ties to Kissinger. One of the emails suggests Clinton saw Kissinger as her role model.

In a 2012 email, Kissinger returned the favor, sending Clinton an intimate handwritten message reading “I greatly admire the skill and aplomb with which you conduct our foreign policy.”

New York University historian Greg Grandin, a leading expert on the statesman, estimates that "Kissinger’s policies resulted in at least 4,124,000 civilian deaths, probably many times that number of wounded and refugees."

"I've known her for many years now, and I respect her intellect," Kissinger said of Clinton in a 2014 interview. "She ran the State Department in the most effective way that I've ever seen," the accused war criminal maintained.

Moreover, former Vice President Dick Cheney, the mastermind behind the Iraq War — a man legendary journalist Seymour Hersh has referred to as the U.S.'s "Darth Vader" — has said good things about Clinton.

In 2011, Cheney heaped praise on Clinton in a Fox News interview. He called her "one of the more competent members of the current administration" and added that "it would be interesting to speculate about how she might perform were she to be president."

Cheney said he did not want to go so far as to endorse Clinton, as it could prove to "be the kiss of death for her," but he did applaud her. In the past year, he has returned to criticizing Clinton over her email scandal, but his critiques have been lukewarm.

This is not the only Bush official with nice things to say about Hillary. When she was secretary of state in the Obama administration, Clinton had a good relationship with Robert Gates, former secretary of defense who served under Bush and was kept on a fear years after under Obama.

Gates decided Clinton "was someone he could do business with," the New York Times explained. Himself a hawk, Gates recognized Clinton's shared values, admirably calling her "a tough lady."

That's not all. A list of prominent conservatives who have backed Clinton would not be complete without right-wing media mogul Rupert Murdoch, who joined the Hillary fan club before her first presidential campaign.

"The mating ritual of the unlikely allies has been under way for months," CBS reported. "Clinton set political tongues to wagging [in April] by attending a Washington party celebrating the 10th anniversary of Fox News, the cable news channel owned by Murdoch."

An unnamed source explained Clinton and Murdoch "have a respectful and cordial relationship. He has respect for the work she has done on behalf of New York."

"Clinton has worked hard to take the edge off her reputation as a card-carrying liberal," CBS said. "She has has collaborated with congressional conservatives on some pieces of legislation, called for a 'common ground' on abortion and cut a political figure some on the left see as decidedly un-liberal."

In its article on the Clinton-Murdoch relationship, The New York Times quoted liberal writer Paul Waldman, who remarked, "People on the left don't like it because they find new things not to like about Hillary all the time."

Today, almost a decade later, this comment rings just as true. Again and again, Clinton shows her reactionary stripes, in her whitewashing the Reagans' inaction during the AIDS epidemic, to her embracing George Bush at Nancy Reagan's funeral, to her support for gutting welfare, to her pushing for war after war.

Clinton may suddenly claim to be a progressive, when under pressure from her leftist opponent Bernie Sanders, but she has been remarkably consistent from her days as a Young Republican leader working for Barry Goldwater to now.

In fact, Clinton once boasted of this on her website, writing, "I have gone from a Barry Goldwater Republican to a New Democrat, but I think my underlying values have remained constant: individual responsibility and community."

It is not just that the Republicans have become so extreme that ruling-class figures will choose any alternative. Charles Koch or any other plutocrat would never say he could endorse self-declared democratic socialist Bernie Sanders — who, in opposition to Clinton, proudly proclaimed "Kissinger is not my friend."

Clinton, rather, embodies the "New Democrat" movement — the post-Reagan Democrat who has embraced neoliberal economics, defending free trade agreements and privatization, who steadfastly backs each and every war, pushing for militarized "humanitarian intervention."

Charles Koch's indirect endorsement should not come as a surprise. The media and commentariat simply need to do a better job of placing it in a larger historical and political context.