Down with the "Innovation Party": Politico's former CEO makes a political pitch tailored for the rich — including Mark Zuckerberg running for prez 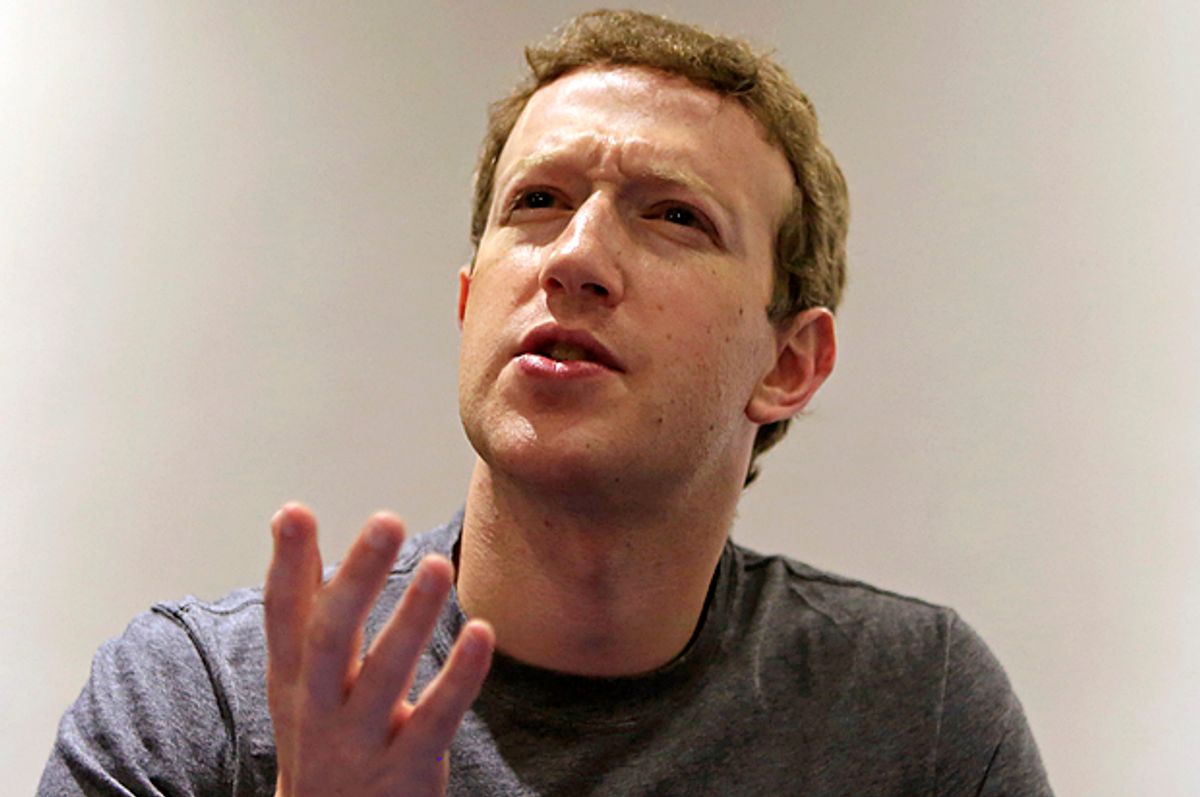 We can’t seem to get through a presidential election cycle without some high-minded and thoroughly clueless push for an independent third-party candidate to save American politics from itself through the power of “disruption.” Back in 2008 we had the Unity08 movement, which planned to use the internet to crowdsource a party platform and nominate a bipartisan presidential ticket. It failed to raise any significant amount of money or attention, and folded up operations as its leaders quit to join a Draft Michael Bloomberg movement (that also failed). Four years later we were given the gift of Americans Elect, a hedge fund-financed third-party movement that, again, promised to use the internet to smash up the two-party system with the twin sledgehammers of “disruption” and mealy-mouthed centrist twaddle. Despite the enthusiastic backing of Thomas Friedman and (again) Michael Bloomberg, Americans Elect couldn’t draw any significant support and failed to nominate a candidate for the presidency.

The lesson to take away from all this is that there are plenty of dumb rich people out there who believe they know how to fix the political system – all it takes is money and the internet and enough vapid business jargon to obscure the fact that you don’t actually stand for anything. That brings us to the current election cycle and former Politico CEO Jim VandeHei, who has written an op-ed for the Wall Street Journal laying the groundwork for a third party to, sigh, “disrupt” the established political order.

The op-ed itself is a masterpiece of empty gibberish and lazy clichés. VandeHei contrasts the “Washington, DC bubble” with “Normal America,” as typified by “two blue-collar towns” from predominantly white parts of the country. He writes about “disrupting the Establishment” and “governing paradigms” and “authenticity” while also mustering the nerve to sneer at “whatever nonsensical language today’s political class was taught to speak.” It feels like a parody of what a determinedly self-unaware “radical centrist” tycoon might consider astute political analysis. “Use the Internet revolution for the greater good,” VandeHei writes. “Call on Silicon Valley technologist to do tours of service to bring data solutions and efficiencies to our aging governmental systems.” None of that actually means anything, but it sounds vaguely intelligent and business-like.

What name does VandeHei have in mind for this party of innovation? Why, The Innovation Party, of course. He floats Facebook founder Mark Zuckerberg as a potential candidate, while Michael Bloomberg (again) can "help fund the movement" before becoming Treasury Secretary in the Zuckerberg administration. “Who is against innovation," VandeHei asks, "especially when winning campaigns are almost always about the future?” Innovation! Winning! Future! Zuckerberg! Words! Nouns! Politics!

To bring a little spice to this grim buzzword muesli, VandeHei mixes in just a touch of creepily militaristic authoritarianism. “Exploit the fear factor,” he writes, urging the Innovation Party candidate to employ a tactic that is as old as politics itself. As for the party's actual defense policy, he writes:

President Obama has established an intriguing precedent of using drone technology and intelligence to assassinate terrorists before they strike. A third-party candidate could build on death-by-drones by outlining the type of modern weapons, troops and war powers needed to keep America safe. And make plain when he or she will use said power. Do it with very muscular language—there is no market for nuance in the terror debate.

These are the sorts of value judgments you arrive at when you’re unbound by any sort of coherent ideology. The question surrounding the flying death machines used to carry out assassination missions ceases to be one of legality or morality, but whether it’s innovative and “intriguing.” Are these weapons and tactics legal? Who cares! They’re modern and muscular, and thus fine tools for “disrupting” a terrorist training camp/wedding party.

It’s all very silly and evil to the casual observer, but this piece wasn’t written for general consumption. The intended audience is the same class of self-absorbed rich people who’ve sunk money into the third-party vanity projects of previous election cycles. VandeHei left Politico earlier this month because he “caught the entrepreneurial bug” and wants to “start a new venture” in the online media world. He wrote a piece last week talking about “the next phase of the media revolution,” but to get there he needs money, and that’s where this op-ed comes in. It’s a signal flare to every deep-pocketed Acela corridor elite that VandeHei Media Revolution, Inc. is all about “disruption” and using the internet to shred Establishment paradigms or whatever, so please consider investing.