Kelly Ripa’s victory: With her masterful return to “Live,” she reminds everyone who's boss

The daytime TV host, home from self-imposed exile, had a few pointed words on "respect in the workplace" 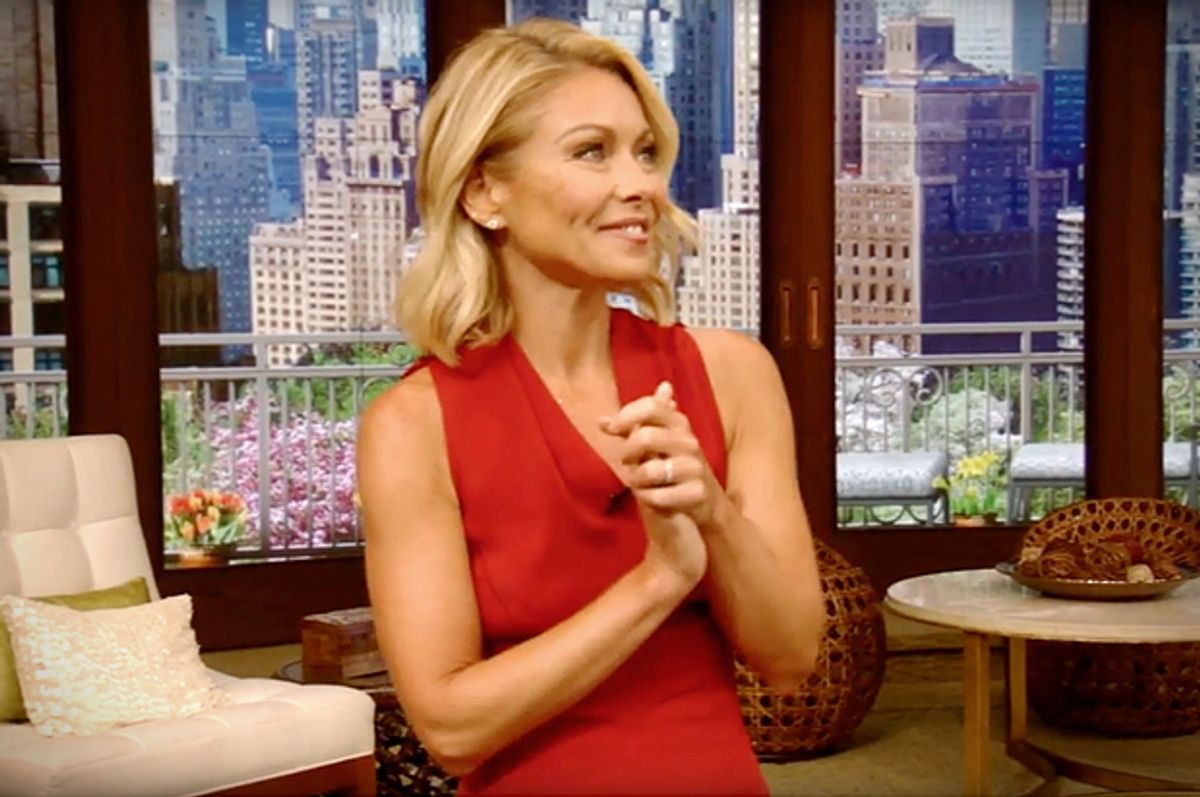 Kelly Ripa returned to her show with grace and confidence on Tuesday morning, entering hand-in-hand with cohost Michael Strahan before standing solo to address the audience, wearing a red jumpsuit and matching heels that were the very definition of fierce. Ripa made headlines last week when she walked out the show that has her name on it—“Live With Kelly And Michael”—after the top brass at the company both promoted her junior partner and only informed her of that fact just minutes before air on Wednesday.

Her walkout was the daytime television version of “I’m mad as hell, and I’m not going to take this anymore”—gutsy, vulnerable, entitled and angry all at once. Viewers watched as her cohost Strahan and the substitute hosts brought in while she was gone floundered through the formula of ingratiating charm and performed authenticity that Ripa has down to an art. Strahan has his own goofy appeal, a sort of overgrown-puppy demeanor, that undoubtedly tests well and will be an asset in his upcoming expanded role at “Good Morning America.”

Ripa’s persona is different. Being a daytime host can be a milquetoast popularity contest, but Ripa is a snarkier queen bee, a petite bundle of irrepressible energy. She has succeeded by creating a rapport with the audience that does not feel artificial or studied; she has not sanded down her sharper edges in order to feel comfortable on-screen.

But even for her, her solo address to the audience was surprisingly frank, after a minutes-long standing ovation from the audience. She started with: “Guys, guys, our long national nightmare is over. Please, sit down, please be seated. I’m going to be completely honest, I am fairly certain that there are trained professional snipers with tranquilizer darts in case I drift too far—“ and here she lifted her hands for air quotes—“‘off message.’”

It’s extremely rare for a television personality to so frankly address the business forces or corporate interests behind a show; it is even more rare for multimillionaire professional personality to acknowledge an agreed-upon message. And it is one-of-a-kind, really, for a daytime television host to describe her perch as one surrounded by faceless enforcers, be they publicists or snipers. The honesty that Ripa delivered to the audience was breathtaking, and indeed, she cited that impulsive honesty as why she knew she had to take time away from the show. “I always speak from the heart, and I didn’t want to come out here and say something I might regret.”

Ripa appeared to be reading off of a teleprompter, but if she was, she wasn’t beholden to the transcript; she was making eye contact around the studio with audience and the show’s crew, and inserting little riffs and adjectives when it seemed appropriate. She never used the word “sexism” or “gender,” but to my mind, it was implied—underscored by her dead-on eye contact with the camera when she intoned the words “respect in the workplace.”

“Apologies have been made,” she continued, “and the best thing to come out of all of this, you guys, is that our parent company has assured me that ‘Live’ is a priority… there is a commitment to this show and to the people that work here, and most importantly, to you the viewers, who have watched us every day for 30 years.”

When she returned to sit next to Strahan, she let slip her only reflexive apology of the morning, saying “sorry, thank you,” to him about taking up the time for her address. She followed with a bit of a jokingly delivered bluster, but one that was grounded in total truth: “I just, I just had to say something.”

The cohosts struggled to find a rapport for quite a few minutes following her monologue. Ripa was understandably guarded with Strahan, and Strahan had trouble looking at Ripa directly, as if the red jumpsuit was too searing to face. And with good reason. Whatever power dynamics existed on the show before, Ripa has, through a week of masterful media campaigning and audience affection, overturned it in her favor. The standing ovation was for her; the audience loyalty was for her. The mostly female viewership of all daytime television appeared to mostly side with her, too—recognizing an age-old story of disrespected female employees. Ripa leveraged her rapport with the audience and her value as a brand against what seems to be institutional disrespect for her from ABC. It has been a masterclass in knowing your own worth; the type of story daytime television absolutely lives for.