The Donald Trump jokes are on us now: This public humiliation should have tanked his politics career — but it only fueled his fire

5 years after Seth Meyers mocked his presidential ambitions at the 2011 "Nerd Prom," America is the punchline 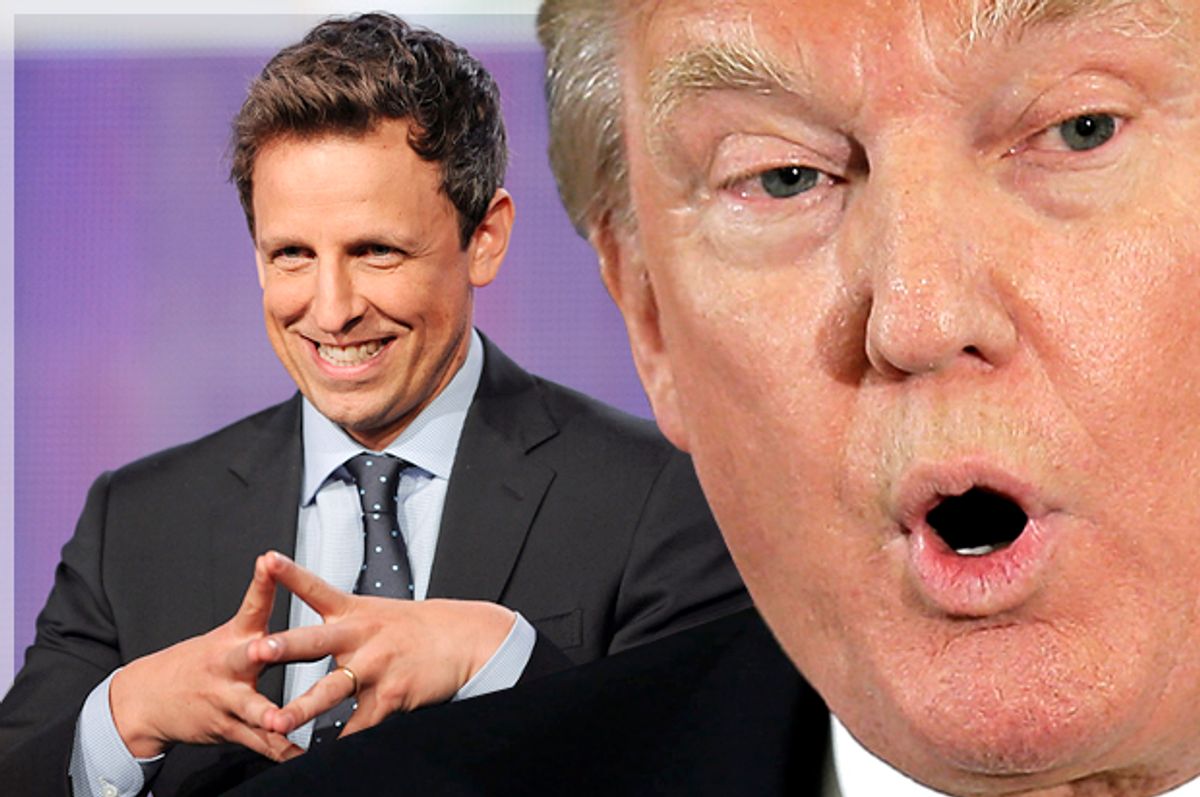 There is an element of the Shakespearean to the Donald Trump campaign. Comedy and tragedy are often inextricably linked in melodrama, and as Trump rambles and bloviates his way through the American presidential election process (and perhaps, one fears, to the presidency itself), an intriguing narrative arc is taking shape. It began almost exactly five years ago, at a moment when the most powerful people in the world literally laughed at him. Being humiliated on international television tends to become a defining moment, and for Trump it led to a personal quest that he prove himself not to be a joke. In his effort to do so, he has managed to drag much of the country down to his level.

The day was May 1, 2011. Halfway across the world, United States Navy SEALs were in the process of assassinating Osama bin Laden, but only a handful of the attendees at the White House Correspondents’ Dinner knew that. The politicians and celebrities had gathered at the so-called Nerd Prom to poke good-natured fun at the nation’s most powerful men and women — and, in particular, Donald Trump. Best known at that time as a self-promoting real estate mogul and reality TV star, Trump had briefly emerged as a leading contender for the Republican presidential nomination by peddling a bizarre conspiracy theory that President Obama hadn’t been born in Hawaii. That night Obama responded to these claims by publicizing certified copies of his certificate of live birth (ironically accompanied by Rick Derringer’s “Real American”), then poked fun at Trump for everything from being a conspiracy theorist and his tacky tastes to hosting "Celebrity Apprentice."

Trump smiled gamely at first, but by the time comedian Seth Meyers took over, his grin turned into a scowl. Meyers’ lobbed one grenade after another at Trump — his hair, his accent, his racism, his reputation as a vapid celebrity, nothing was spared. One particularly cruel line summed up the spirit of the evening: "Donald Trump has been saying he'll run for president as a Republican, which is surprising, because I just thought he was running as a joke.”

Multiple reports have relayed that Trump was absolutely furious at how he was treated, with The New York Times recently identifying this moment as one that fueled his subsequent political actions. “That evening of public abasement, rather than sending Mr. Trump away, accelerated his ferocious efforts to gain stature within the political world,” wrote Maggie Haberman and Alexander Burns. “And it captured the degree to which Mr. Trump’s campaign is driven by a deep yearning sometimes obscured by his bluster and bragging: a desire to be taken seriously.”

After tucking tail between his legs for the 2012 election cycle, Trump reemerged for the 2016 election with a speech that immediately incurred controversy by perpetuating the racist and false claim that undocumented Mexican immigrants were more likely to bring crime and rape. The establishment denounced him, but he shot to the top of Republican polls — in the same way, as he must have noticed, that he gained attention years earlier by promoting the racially-charged birther allegations. Bigotry about Mexicans was soon followed by attacks against Muslims, women, and African Americans (often using Obama as his proxy), garnering him outrage and popularity in equal measure. What Trump learned was, quite simply, that celebrities had the unique ability to turn their fame into a politically viable cult of personality. “Here’s the trick to cults of personality: the leader has to embody the people but also stand above them,” lamented historian Ruth Ben-Ghiat. “He must appear ordinary, to allow people to relate to him. And yet he must also be seen as extraordinary, so that people will grant him permission to be the arbiter of their individual and national destiny.”

The grand irony here is that, by doubling down on his bigotry and fueling that with pure celebrity appeal, Trump didn’t prove that he wasn’t a joke — but he has revealed a particularly unsavory aspect of our national character. Americans like to believe that our political discourse is driven by ideology or, barring that, naked self-interest; yet a man like Trump doesn’t succeed in a nation of either idealistic or rational individuals. A Trump flourishes when we have been consumed by two of our basest instincts: The racism, sexism, and other forms of tribalism that rip us apart instead of bringing us together, and the shallow showboating that has allowed Trump to dominate news coverage and effectively manipulate social media. In a quintessentially epic tragicomic way, Trump’s grandiose narcissism, delusion, and assorted bigotries have become a nation’s shame instead of merely his own. Now instead of being the butt of the joke, he is the set up.

This has not only caused immeasurable harm to our political culture, but as Salon’s Sophia A. McClennen points out in a piece questioning Trump’s mental health, “Much to the chagrin of the reasonable conservatives who wonder what has happened to their party, it is now often difficult to distinguish Republican rhetoric from the ravings of someone suffering from diminished mental capacity.” Regardless of whether Trump becomes president, he has won nearly 9 million primary votes already — that's before today's "Acela Primary" day — and wreaked chaos in one of America’s two major political parties. It's genuinely humbling to contemplate what this says about the political consciousness of a large segment of our country. Or, at the very least, it needs to be.

Are there any lessons to be learned from this debacle? The most obvious is to be vigilant about the ease with which various forms of bigotry can be manipulated by demagogues for political effect, but most educated people were already aware of that and it hasn't make much difference. Besides, an intelligent and influential complex of left-wing comedians already exists to take the wind out of the sails of someone like Trump, but as Salon's Jacob Sugarman writes, “[t]hat these routines have left Trump unscathed is a testament not only to the insularity of their audiences but the slipperiness of their subject.”

At the end of the last century, “Teflon” Ronald Reagan and “Slick Willie” Clinton could politically survive any scandal, due in part to their personal charisma and in part because an America oversaturated with corruption had grown numb to it; at the start of this one, “Sleazy Donald” Trump (Ted Cruz’s only positive achievement was coining that nickname) is immune to ridicule because we’ve grown accustomed to seeing both him and others like him laughed at. Of course, whereas the scandalized politicians of the past acted only on their own behalf, the derision to which Trump is subjected by its very nature extends to his supporters as well. That’s why they didn’t care that Meyers and Obama humiliated Trump five years ago, and why they won’t care what arrows the likes of John Oliver and Stephen Colbert can sling at him today.

The problem isn’t that the Americans who share Trump’s racism, sexism, xenophobia, and other prejudices don’t know that they are viewed as comical, but rather that they’ve responded by doubling-down on the qualities that cause them to be mocked. Thus the ease with which they’ve adopted Trump’s quest to be taken seriously as their own.

That said, perhaps there is another lesson from this story that we should take to heart. When Trump found himself a laughingstock in front of the world five years ago, he had a rare opportunity to reflect on his public persona and try, if he wanted, to become a better man. Instead he focused solely on his desire to be taken seriously. Certainly we should be able to agree that it’s dangerous to elect as president someone who can stoop to such depths in his thirst for validation. People get hurt when our culture deems it acceptable to promote racist conspiracy theories (for proof on how birtherism is racist, see this study) or make generalizations about groups of people based on their gender, race, or religion. Just because every individual has a right to express these views, that doesn’t mean they shouldn’t be held socially accountable for doing so. When we laugh at those who peddle asininity and hate, we recognize that doing these things is a sign of poor character. Once the laughter stops — or, at least in this case, stops mattering — it will mean that we’ve become a dumber and more hateful society.

Alas, it turns out that many voters are receptive to the kinds of flaws Trump possesses, and as a result he has gone farther than anyone expected in a presidential election. Win or lose, every jab issued by Obama and Meyers still applies — and if anything, the sting has been amplified. Trump can still hear the laughter, and he still doesn’t get the joke. The only difference is that America is now part of the punchline.