Hollywood's nanny-cheating cliché hits home: "There’s something so damn interesting and damn depressing about men being attracted to much younger and naive women" 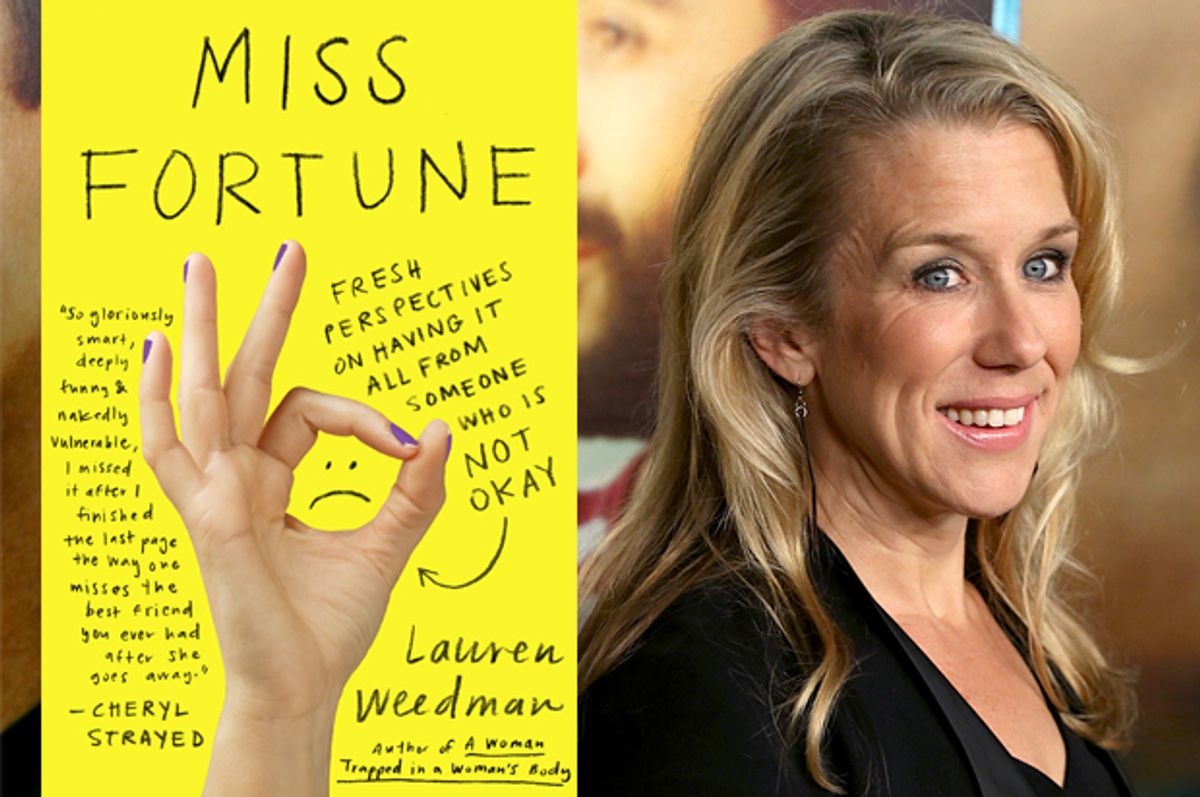 But two years ago, Weedman suffered the ultimate Hollywood betrayal when she discovered that her husband was carrying on an affair with their young son’s twenty-something babysitter.

Weedman would be the first one to tell you that the tabloids took little notice. (“I’m not famous enough to be infamous, apparently.”) Instead, she’s written about the episode—among other mortifications—in her remarkable new book of essays, "Miss Fortune."

Salon caught up with Weedman on the Boston leg of her national book tour and sat down to ask her what it’s like to be a feminist in Hollywood, how she now regards other victims of adultery, and, of course, what it’s like to have pretend sex on camera.

Early in "Miss Fortune" you write about the teenage son of your boyfriend, who, after crashing your car, reveals that he was upset with you for telling a joke about his dead mother. You justify that joke by telling him that you’re an artist, and artists talk about their lives. Given how much raw material is in "Miss Fortune"—about yourself, your ex, your child, your birth and adoptive mothers, etc.—how do you deal with this anxiety about the other people in your stories?

That’s actually the exact incident that taught me that if you write stories about real live human beings—even if you change their names, hair color, drugs of choice—you will incite real live human reactions. What I’ve discovered works for me is to show everyone the stories before they are published, so they don’t feel ambushed. I also give them full power to veto aspects of the story, or change elements that bother them, or make them feel like suing me. The last thing I want is for my work to cause someone pain. Unless they enjoy pain—then I’m honored to be a part of it.

The big goal for me is to find out what’s going on with myself in stories. To shit-talk myself, not others.

Okay, but what about your five-year-old son. Do you worry about him reading about the demise of your marriage?

My son’s actually six, so he’s already asking about the sex tape. Kidding!

I actually thought about that a lot while I was writing the book. It never leaves you once you have a kid. At least it hasn’t for me. Dear god, don’t let my mother find out! was replaced by What will my son think? the day after he was born. Should I be worried? People keep mentioning that to me, but somehow I’m not worried.

I didn’t do an XXX-rated movie or take part in the Killing Fields. I wrote about what it was like for me after the split up. I was careful to not get lurid or petty about it. Everything about my break up that I wrote about is exactly how I’d explain it to my son when the time seemed right.

I was just going to ask you to talk about what it’s really like to film a sex scene?

If you can be in the right headspace and not worry about what you’re looking like, it can feel like pretending to have sex … with someone who’s wearing a tiny burlap bag tied around their penis.

For the record, I don’t do hot sex scenes. As Patty, I’m this weird lonely sex addict masturbating with a Sharpie in the office. In "Looking," I actually got to be an attractive woman having sex with a big old attractive man. No, wait; we didn’t actually have fake film sex. We just lay in bed after sex and I kept getting the note that it looked like I was trying to hide by boobs from the camera. Which I was, even though the actor in the scene with me told me, “a tittie is a tittie. And men like titties, so let’s see them.” Very sweet.

This feels like the right moment to ask how you deal with the Hollywood bullshit as a smart feminist? I guess I’m wondering why you’d subject yourself to the youth-and-beauty worshipping of it all?

Because someone’s got to play the “Ew! She touched me!” characters. [Laughs]. Actually it’s because I’m actor and I wanted to tell stories. I’m not a part of the youth-and-beauty-worship set, aka Network TV. There’s a place for character actors.

But the mindset has taken its toll on me and I regret that I’ve let that happen. It’s not uncommon for me to refer to myself as “a fat troll who’s almost 50.”

The heart of your book is about discovering that your husband had an affair with your son’s babysitter. Did going through this give you any sympathy for the lurid tabloid tales we read about this happening to movie stars?

Oh my god, yes. Geez. I could go off on this subject. My mailman Eddie is sick of hearing me talk about it. I’ve been stuck on this one element: the fact that the journalists are often women. Women have been slapping the shit out of other women directly and indirectly for decades, yet that’s the element that’s been upsetting me.

It’s hard enough to get through the day. Why would you want to make life so much harder for someone? I guess a part of it is that people think “Oh, they’re celebrities! Boo-hoo. Go back to shining their diamonds and buying $59 cold-press juices.” But suffering is suffering and no amount of thousand-dollar face creams helps with the delicate state of being alive. It’s hard for everyone.

There’s something so damn interesting and damn depressing about men being attracted to much younger and naive women. Leaving behind their old, aging, bossy wives—like that old biddy Gwen Stefani. Just today I read that the definition of “ingénue” was a girl that was young and naive. My entire life I’d thought that it meant “young and pretty.” It never dawned on me that naive was a selling point.

You talked about finishing a draft of the book before it all went down with your ex. Can you talk about how that changed the arc of the book?

The first draft of the book felt like a desperate attempt to deliver something that read like a string of ‘wacky anecdotes.’ No depth or narrative arc. I couldn’t see the stories I needed to tell because I was still living it and because I didn’t know the real stories.

For instance, the story about going to a strip club with my ex- husband was all about how weirded out I was by strip clubs. Yet I couldn’t put my finger on why sitting next to him in the club had been so awful. Until the moment I found out the truth about what had been happening between my ex and our babysitter. Then the sense of doom and angst started to make sense. It was like somebody cut the rope and the bucket I’d been sitting in went crashing deep into the well.

That’s not a good analogy. It leaves me trapped down there, waiting for a fireman to save me. Clearly I need a new husband to tell me to stop answering these questions and put on some heels and dance for him. That sounds so flattering yet depressing. Just like Hollywood.