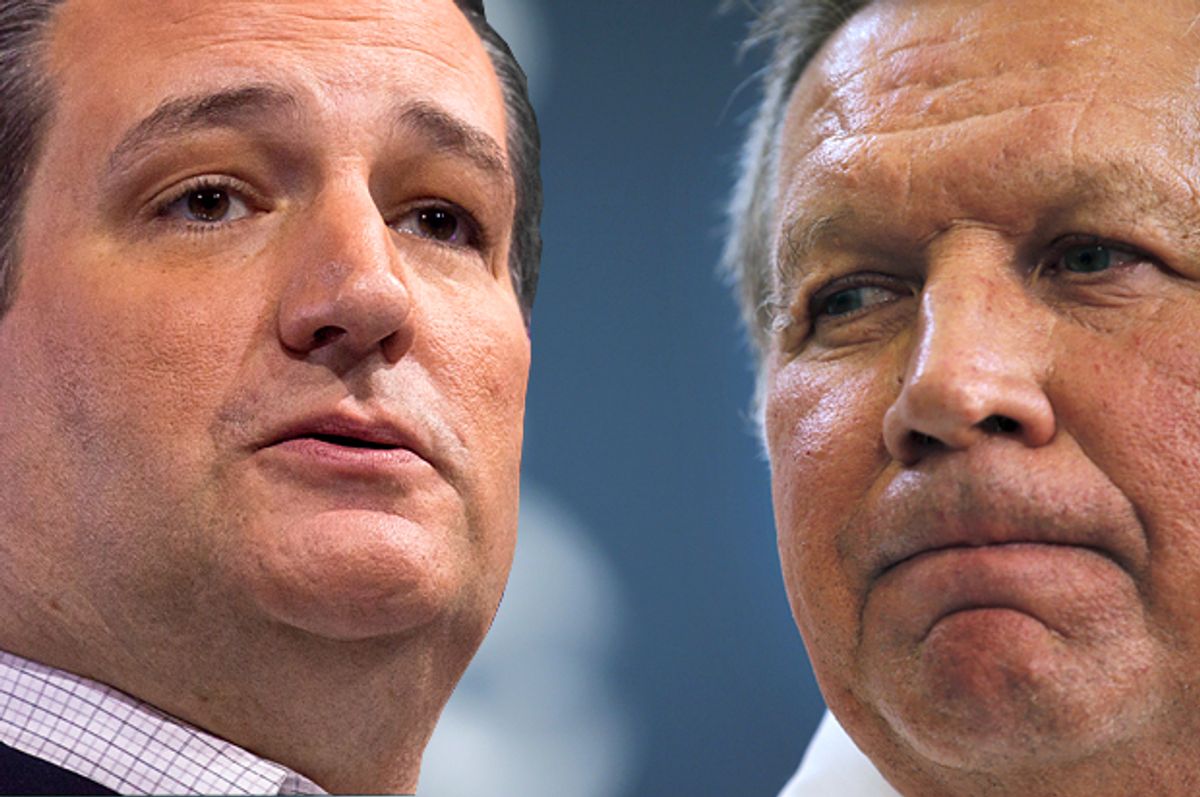 Ted Cruz and John Kasich have spent most of the campaign bickering about who is better equipped to defeat Donald Trump. Cruz's argument has always been that he wins primaries and is the only “outsider” alternative to Trump. At some point, Kasich stopped pretending he had any chance of winning at the voting booth, and so his argument became: Trump is a disaster, Cruz is unelectable, and I'm the only guy who polls favorably against the Democratic candidates.

As I wrote Monday, Cruz and Kasich decided over the weekend to put aside their differences. The two candidates agreed to form a united front against Trump, strategically campaigning in some states and pulling out in others. The goal was no longer to win as many delegates as possible but rather to stop Trump from reaching 1,237 delegates before the convention. This was really the only play at this stage: neither Cruz nor Kasich can win a plurality of delegates – it's all about blocking Trump and bracing for a brokered convention.

The initial plan was for Kasich to cede Indiana to Cruz, a critical state in the effort to undercut Trump's march to 1,237. There are 57 delegates at stake in Indiana. Currently, Trump leads by an average of 6 points over Cruz. Were Kasich to abandon Indiana entirely, Cruz stands a good chance at eclipsing Trump. At the same time, Cruz was to pull out of Oregon and New Mexico, leaving Kasich to compete against Trump in a de facto two-candidate race.

This was an act of desperation by both campaigns, but it was necessary and perhaps the last opportunity to prevent Trump from clinching the nomination.

Cruz and Kasich's union was humming along nicely until it collapsed roughly 24 hours later. According to a New York Times report, the great alliance “was already fraying almost to the point of irrelevance on Monday, only hours after it was announced to great fanfare.” After reaching an agreement, Cruz called it “big news,” saying “John Kasich has decided to pull out of Indiana to give us a head-to-head contest with Donald Trump.”

Indeed, Kasich, while not publicly campaigning in Indiana, was nonetheless scheduled to hold a fundraiser in Indianapolis today. He's also slated to meet with various Republican leaders in the state, including Gov. Mike Pence. These are not the actions of a candidate who has ceded the race.

Cruz, for his part, was also busy on Monday backing out of the arrangement he made with Kasich. “We never tell voters who to vote for,” read the latest campaign talking point. “We're simply letting folks know where we will be focusing our time and resources.” In other words, I'm not actively campaigning in Oregon and New Mexico, but you should still vote for me. Obviously, the positions taken by Kasich and Cruz on Monday defeat the entire point of their alliance.

This was bound to happen. Cruz and Kasich don't like each other – that much is clear. Their alliance was formed out of convenience and doomed to fail the minute an actual sacrifice was required. That they tried at all to cooperate will give Trump more fodder for his anti-establishment shtick: This system does indeed look “rigged” when the other candidates are uniting with the sole purpose of usurping Trump.

The unintended consequence of this botched alliance will be to increase the bitterness between the Cruz and Kasich campaigns. And that, in turn, will help Trump, who is already inching closer to winning the nomination on the first ballot. If Trump does manage to secure 1,237 delegates before the convention, this week will be seen as the last chance the party had to stop him.