The growing shadow of Donald Trump: The scariest thing about him is that he just keeps getting more popular

After a dominant showing in Tuesday's primaries, Trump is close to a lock for the GOP nod. We should be terrified 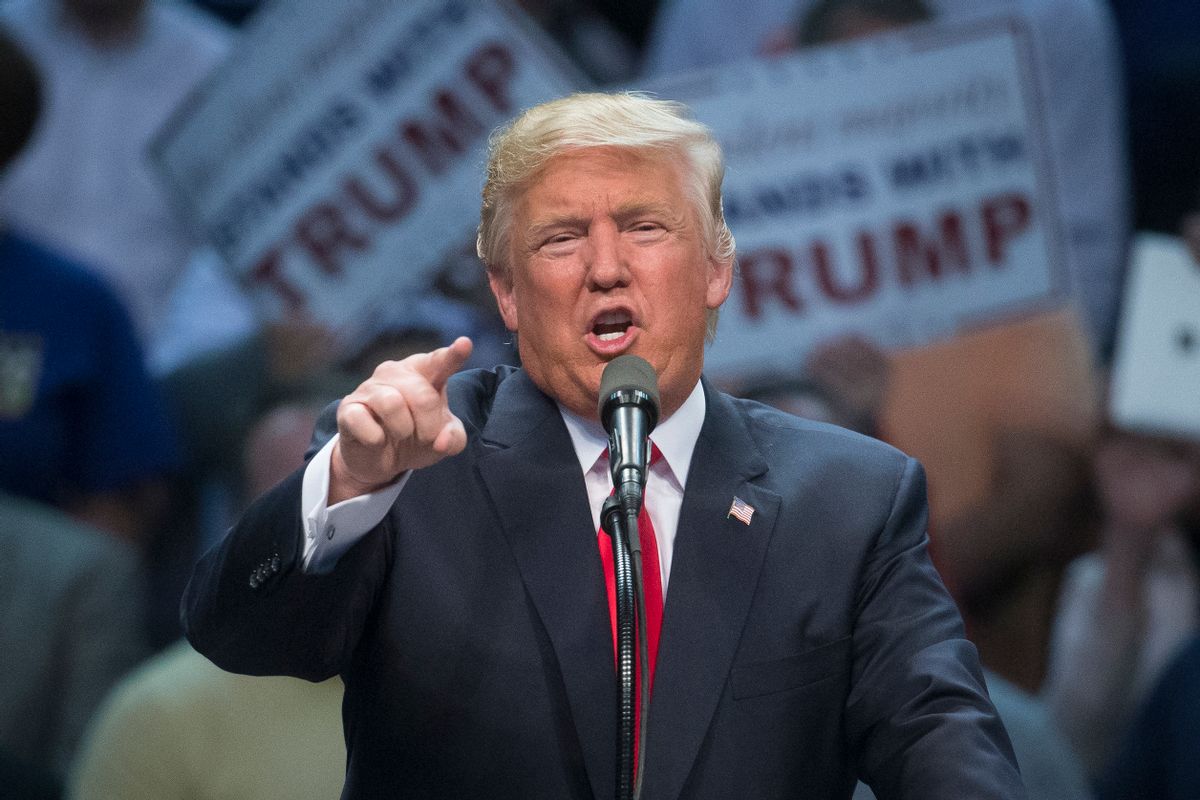 When everyone woke up on Tuesday morning, the expectation was that Donald Trump was going to sweep the primaries that day. The RCP average had him winning Pennsylvania by 22 points, Maryland by 21, Connecticut by 27, Rhode Island by 29 and Delaware by 37. He actually did better than that in Pennsylvania, Rhode island and Maryland, but anyone looking at those polls had to know it was going to be a Trump blowout. Nonetheless, the talking heads put on a good show and at least pretended to be surprised and impressed by Trump's yuuuuge showing. And people are starting to fully grapple with the reality that he is more likely than not going to be the nominee.

In fact, some are saying it's over. Sahil Kapur of Bloomberg reported that Scott Reed, Bob Dole's 1996 presidential campaign manager and current political strategist for the Chamber of Commerce, said, "Trump is now the inevitable GOP nominee." Trump himself told the press at his "victory press conference" that he considers himself the "presumptive nominee."

He's probably right. But it's not a shoo-in. This group of states was always very favorable ground for him, as those pre-election polls showed. He's been very successful at winning in the east. But the remaining states are west of there and it is still possible that he could be stopped, if every card falls exactly the right way. According to CNN's John King, Trump started the night needing 58 percent of the remaining delegates and after his wins this week, he will need 50 percent of all the delegates going forward to win the nomination. That's not impossible, of course. But if Ted Cruz were to eke out a Wisconsin-like win in winner-take-all Indiana, it would make California the last stand, a state with a complicated delegate process where Trump could come up short and go into the convention without the necessary 1237. (And they could still change the rules if they want to, which would probably turn the process completely upside down.)

So it's not actually over and the next seven days are the most crucial of the GOP race. Indiana is really the last chance to stop Trump. Unfortunately, it's dependent on people understanding the logic behind the Cruz-Kasich pact and that isn't easy, mostly because Kasich is being cagey about it and people are naturally confused. According to Tony Dokupil of MSNBC, who spoke with Jim Brainard, Kasich's own Indiana co-chair, nobody really knows what to say to the voters. After the announcement of the pact, he had been telling people to vote for Cruz. Then Kasich was on TV saying people should vote for him if they wanted to and he had to back away. It's a mess, probably because of Kasich's ego which seems to make him unwilling to really get with the program. In interviews, he hedges on what he's doing and so far has refused to admit that people have to vote for Cruz in order to stop Trump.

It's hard to imagine that any of this will work, but one more week and we'll know for sure. We certainly know a number of very disturbing things about Republican voters, however. Up until now, Trump, for a variety of reasons, has been kept below 50 percent. And one is tempted to assume that his recent success is a result of anger at the #neverTrump movement or the idea of the establishment putting its thumbs on the scale. But the exit polls last night showed that most Trump voters had decided to vote for him more than a month ago. They really like him. On the merits. And more and more are liking him every day.

What this means is that a majority of Republicans apparently either like or don't care that Trump thinks Mexicans are rapists and criminals. They are fine with someone as president who wants to torture terrorist suspects and kill their innocent children. They have no problem with someone who wants to use summary execution against accused deserters. It's not a deal breaker to vote for someone who has a long sordid history of racism, sexism and misogyny. They don't find it completely unacceptable that he has no respect for prisoners of war, saying he "prefers" people who don't let the enemy catch them. They are apparently not alarmed by the fact that he promises to change the libel laws so the press cannot freely write about him. They cheer when he eggs on violence at his rallies and don't think his offering to pay the legal fees of someone who hit a protesters is a problem. They see nothing wrong in his pledge to kill oil truck drivers and seize oil wells in foreign countries. Sending Syrian refugees that have been properly vetted and are living in the country back to a war zone to be killed is fine with them. Reviving the 1950s plan called "Operation Wetback" to round up and deport millions of people doesn't bother them either. Building a huge wall along our more than thousand mile southern border sounds like a reasonable plan to them. These, and more, are all "politically incorrect" ideas that many GOP voters are happy to endorse.

They also apparently have no objections to voting for a man who lies as easily as he breathes and has demonstrated over and over again that he is completely unprepared for the job of president, has no idea what it entails and has the knowledge of world affairs and domestic policy of an average 16 year old boy. He has shown not one bit of desire to learn about anything but his poll numbers and what TV pundits are saying about him. He is a proto-fascist demagogue who doesn't even know what those words mean. And that's a-ok with all those people who are voting for him.

There are some Republicans who understand that their party is putting the nation and the world at risk but so far they are powerless to stop him. Too many of their voters love what they're hearing. Just ask them and they'll tell you, "he says what I'm thinking."

Trump promises that soon he'll be so presidential we'll all be bored and begging him to entertain us again. His campaign manager says it's all an act. I don't believe it, but it doesn't really matter one way or the other. What's really dangerous about Trump isn't the man himself, it's that millions of people in this country think just like him -- and their numbers are growing.