Why most self-help plans don't work: "You can’t just cut and paste a few things happy people do and hope that your life is going to improve"

Salon speaks to a University of Texas professor about friendship, mindfulness and why you can't chase happiness 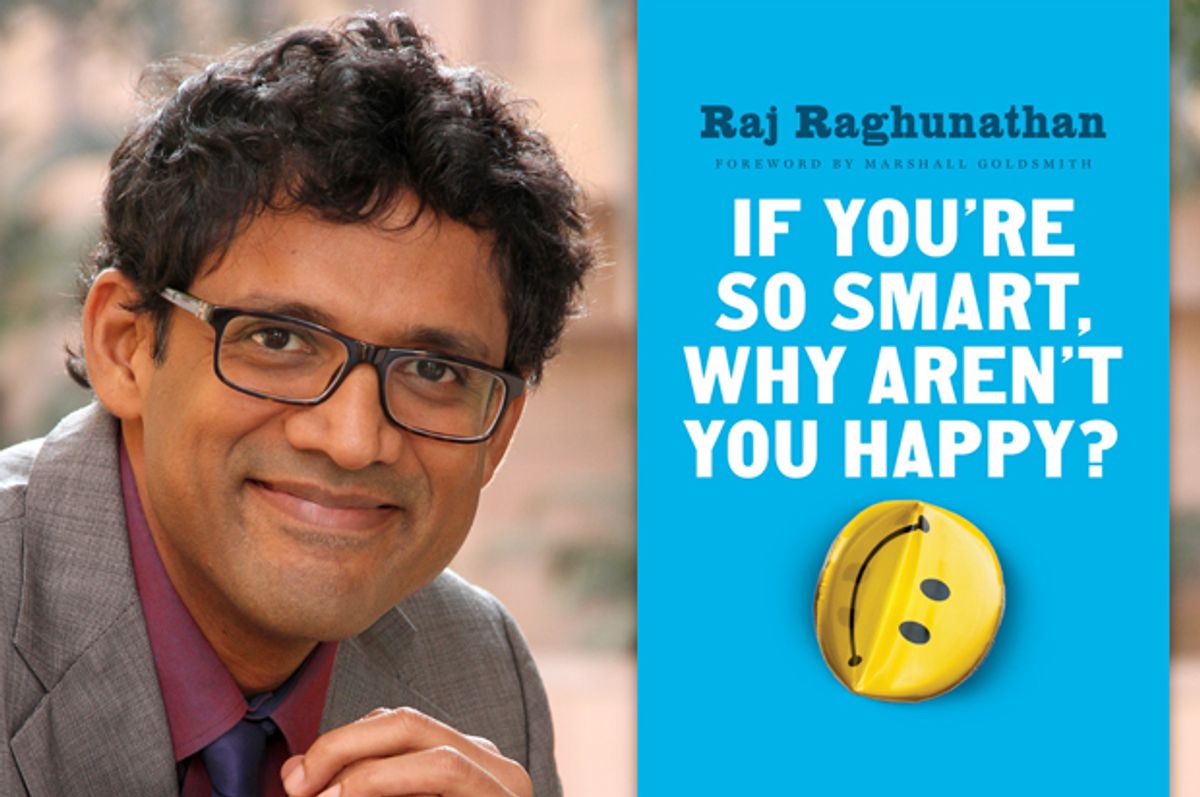 Human beings have been seeking happiness, presumably, since the dawn of time, but it’s only recently that happiness has become an industry. Between self-help books, academic studies, and the positive psychology movement, you’d think everything had been said on the matter.

But Raj Raghunathan, a University of Texas business professor who draws from psychology and various social sciences, comes up with some fresh insights in his new book, “If You’re So Smart, Why Aren’t You Happy?” The book grew out of the dissonance he experienced when he compared the worldly success of his friends and classmates with their level of fulfillment in life. What was keeping otherwise successful people from feeling happiness?

Raghunathan spoke to us from his university office in Austin. The interview has been lightly edited for clarity.

So by now there’s a shelf of book on happiness – histories, self-help books. It’s a growth industry these days. When you contemplated doing your own book on the subject, what seemed to be missing from the story of happiness?

You’re right – there are lots of books on happiness… But if you look at most of these books, there are two things that are missing. None of them are aimed at the smart and successful audience – people with a high IQ, come from a good background, headed on a path of success. Conventional yardsticks of success – status, fame, and so on. I think people assumed these people already had everything and were already happy, that we don’t need to worry about these guys. Now it turns out that might be a faulty assumption… Which is kind of surprising. You’d think that successful people were good at achieving their goals, and happiness would be an important goal.

We could talk about, Do these people even deserve to be happy? Why talk about them when they already have so much?

The second difference is that when you look at books on happiness: A lot of the books fall on the scientific side of [asking for] many, but not very big, changes. It might say, Go and make a bunch of new friends. Try and get organized. Don’t check your email after 9 p.m. Things like that.

While these books that are not so scientific, and are based on spirituality, tend to ask for relatively deep-seated changes. They might ask you to start believing in God, or to start a very regular meditation routine starting today – they’re asking for a very deep dive. It seems like it’s asking for a change at the level of values.

My book is in a quadrant where I don’t think there are many others: It’s based completely on science, but in the end the conclusions I come to require you to make some deep-seated changes. But I’m hoping that in the course or reading the book you’ll see that they are required: You can’t just cut and paste a few things happy people do and hope that your life is going to improve. It’s going to have to come from the inside.

What are some of the mistakes people make in trying to be happy? I wonder if people take happiness too seriously, or not seriously enough?

That’s a great question. I think both of those are – paradoxically – true. They make a lot of mistakes, I think.

On the other hand, there’s the reactionary crowd that says, “Look there’s so much talk about happiness, I’m so tired of this, I’m going to be as miserable as I want.” That’s a mistake, too.

In the end, everyone desires to be happy: There’s no doubt about it. There are studies that show that for animals, like rats, if something makes them happier, they’ll even ignore food.

So it’s important to find a balance. It may seem hard to pull off, but lots of other things in our lives are in the same category. Take, for example, love – we all seek it. But if you chase it too directly, and everybody is probably guilty of that at some point, it’s the wrong approach. Sleep is another example: You can’t pursue it too intently. You lie down, but you can’t ask yourself every 10 minutes, “Am I falling asleep?” That’s not the right recipe for falling asleep.

So for happiness, you can prioritize it: You might live a healthier lifestyle, practice gratitude… without pursuing it too intently and directly.

How important is friendship to happiness?

Most of the researchers say, If you do one thing, do that. We are so hyper-social as a species, some would say excruciatingly social. One research finding found that four of the five default processes – the ones that go on at the back of our brain – are about relationships with others. That’s how important relationships are.

Another looked at so-called very happy people… One thing that stood out was having one very intimate, close relationship. If you want to be in that group, it’s no longer a luxury, it’s a necessity.

You close by writing about mindfulness, a category people define in all kinds of different ways. What does it mean to you and why is it important?

Mindfulness can be defined – I’m going to piggyback on Jon Kabat-Zinn’s definition – as a way of being aware of what’s going on without judging it. If I were going to be mindful of my breath, I’d ask, “What does it feel like when I pull it in through my nostrils? What does it feel like in my nasal passages? Can I trace the air to my lungs? Is the outgoing air a little bit heavier because it has moisture?” And so and so forth.

If I notice my breathing is a bit more shallow than it should be, I might make an negative judgment, that I’m not breathing well. But when you’re mindful, you try not to make that kind of judgment…. It’s basically getting back to reality, in a sensory sense – observing reality without the filter of the mind.

And it turns out that it’s useful in so many different ways. One of the most mysterious ways it has this effect is that that act makes you feel happy, relaxed, makes the stress go away. It’s not clear why that is.

The effect it has physiologically is that it actually thickens the left prefrontal cortex – which has been associated with happy people. Happy animals, too. And it turns out it strengthens something called the vagal tone – makes you more compassionate more empathetic, makes you very good at not responding in a preconditioned way to stimuli… You give yourself a little more room to respond. It helps you be a little more spontaneous, as opposed to impulsive…. It makes you more in touch with what’s going on in your body, and therefore you know how to react in situations. You know what you’re body’s craving.