Yes, Beyoncé is a "real artist": Stop challenging the authenticity of her work 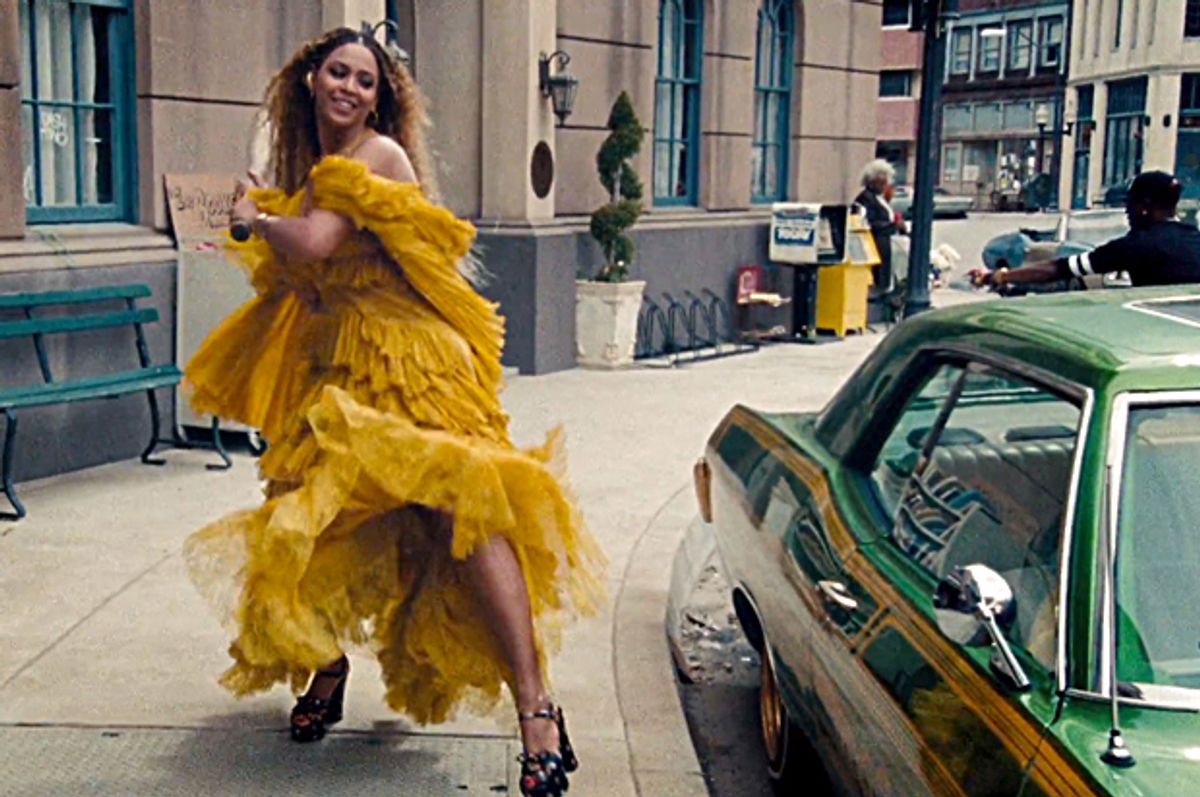 It's clear that from now on, a new Beyoncé album is going to be a capital-E Event rather than a simple release. Over the weekend, her sixth studio album, "Lemonade," premiered on HBO as the soundtrack of a visually stunning music video. The hour-long production, which rivaled any theater movie for quality, proffered an infidelity narrative most interpreted as representative of Beyoncé's marriage to Jay-Z. That remains to be seen, although what's perhaps more impressive is the sheer amount of musical cooperation that went into crafting "Lemonade." Billboard broke down the credits in an exhaustive, detailed piece which pointed out guest stars (The Weeknd, Jack White, Kendrick Lamar, James Blake), samples (Led Zeppelin's "When The Levee Breaks," OutKast's "SpottieOttieDopaliscious") and lyrical interpolations (Yeah Yeah Yeahs' "Maps"). More interesting, the article also pointed out notable producers (Boots, Diplo, Mike Will Made-It) and revealed that indie rock darlings Father John Misty, Vampire Weekend's Ezra Koenig and Animal Collective all had songwriting credits.

All told, the magazine reports, the "Lemonade" credits are 3,105 words long. Naturally, the comments section chimed in to call her "manufactured," dismissed her as an "entertainer" and not a "real artist," and said the record didn't represent "her vision" since there were "all those other people" involved. These criticisms were sadly predictable: Beyoncé has been attacked for years for having too many songwriters on tracks (often incorrectly, in the case of "Run The World (Girls)," whose multiple songwriting credits come because of samples). And in general, artists operating in the pop realm tend to be viewed with skepticism if their albums seem too much like music-by-committee. Taylor Swift for one suddenly lost her songwriting cred when she went full-on Top 40 for "1989." A 2015 article in The Atlantic even stated: "Before writing most of Taylor Swift’s newest album, Max Martin wrote No. 1 hits for Britney Spears, ’N Sync, Pink, Kelly Clarkson, Maroon 5, and Katy Perry." Never mind that the deluxe edition of Swift's "1989" featured three of her personal songwriting voice memos, or that a series of Grammy Museum videos featured her breaking down her self-directed concept for the album.

The rockist subtexts informing this criticism are tiresome, especially because self-sufficiency is a rare gift in any genre. In fact, only a few artists possess the ability to do everything well. (Prince was one of them, of course: His production, composition and performance abilities were unimpeachable, and will likely never be matched.) Artists often thrive when they have sounding boards and trusted outside collaborators. Throughout her career, Madonna has had many creative foils—to name a few, Jellybean Benitez, Shep Pettibone and William Orbit—as she's metamorphosed and grown. And songwriting is hardly the only measure of a musician's worth. Whitney Houston was an incredibly gifted vocalist whose first two blockbuster records featured her interpretations of tunes written by other people. A dynamic performer, she had the ability to have uncommon empathy toward (and the ability to connect with and convey) the emotional core of a song. That characteristic wasn't diminished by the fact her albums may have had a small army of talented studio musicians building the music around her voice.

In fact, the history of popular music is distinguished by such collaboration and cross-pollination. The legendary troupe of Los Angeles session musicians known as the Wrecking Crew appeared on dozens of iconic, chart-topping pop, R&B and rock hits, while the Funk Brothers dominated and shaped Motown in Detroit, and other regional sounds sprang up around the musicians at Muscle Shoals Sound Studios and at Memphis-based Stax Records. Even Michael Jackson had production and songwriting collaborators to help him realize his vision for "Thriller." Although certainly there are plenty of cases when too many cooks ruin an album, the mere fact that a record has a lengthy list of names in the liner notes doesn't make it less authentic or valid.

And as I considered the many components of "Lemonade," it occurred to me that the album is a sculpture of rhythms, sentiments and textures—as well as disparate artists, sonic approaches and eras—in a way that's akin to Beastie Boys' "Paul's Boutique," a groundbreaking record cobbled together via samples. Over the weekend, a writing colleague noted the same thing, and then went one step further, with a pointed tweet referencing other pioneering cut-and-paste albums: "If you feel 'Lemonade' has too many contributors, surrender your copies of 'Paul's Boutique,' [DJ Shadow's] 'Endtroducing' & [Public Enemy's] 'It Takes a Nation of Millions [To Hold Us Back]' now." The idea of pastiche is central to the success of this trio of albums, the core tenet that makes them innovative and laudable. That's also the case with "Lemonade," whose well-publicized indie rock songwriting credits are only a miniscule part of the record's overall breadth and depth. In fact, the YouTube clip for cult act Kaleidoscope's "Let Me Try," which is sampled on the Lamar-featuring "Freedom" and appeared in an ad for Beyoncé's tour, is peppered with commenters who sought out the song and thanked her for introducing them to "good music."

To hold "Lemonade" up to separate (and higher) standards because it's a Beyoncé album has an uncomfortably sexist subtext. Then again, as Tamara Winfrey Harris lays out in this excellent Bitch Magazine essay, "All Hail the Queen? What Do Our Perceptions of Beyoncé's Feminism Say About Us?," all aspects of Bey's life are held to a completely different standard. "The judgment of how Beyoncé expresses her womanhood is emblematic of the way women in the public eye are routinely picked apart—in particular, it's a demonstration of the conflicting pressures on black women and the complicated way our bodies and relationships are policed," Winfrey Harris writes. This kind of unfair policing extended to Beyoncé's politics after her February Super Bowl Halftime Show appearance, which provoked accusations that she was racist.

Spanos observes that Beyoncé working with Jack White ("a forerunner of the movement to bring back blues-rock in the new millennium") and including a sample of "When the Levee Breaks" ("itself a reworked version of a song by black Delta blues artists Kansas Joe McCoy and Memphis Minnie") on "Lemonade" is "a shrewd statement on the genre's complex lineage. She re-appropriates a hard-rock version of a blues classic that gained more traction and recognition than the original, while teaming up with the new standard bearer for the intermingling of blues and rock." This observation points to the intricacies of "Lemonade," as well as underscores the savviness of its execution.

But in the end, the most telling name in the credits for "Lemonade" is the one next to executive producer: Beyoncé Knowles Carter. This credit comes first, before the record's song-by-song breakdowns and notations of other collaborators. This position is certainly no accident, and it simply reiterates that Beyoncé was integral to every note on the album. Regardless of how many producers, songwriters and musicians appear on "Lemonade," they are merely supporting Beyoncé and the musical, political and personal narrative she wanted to put forth with this record.