Moms deserve better than this: The shameless pandering of "Mother's Day" is an argument for the death of "hyperlink" films 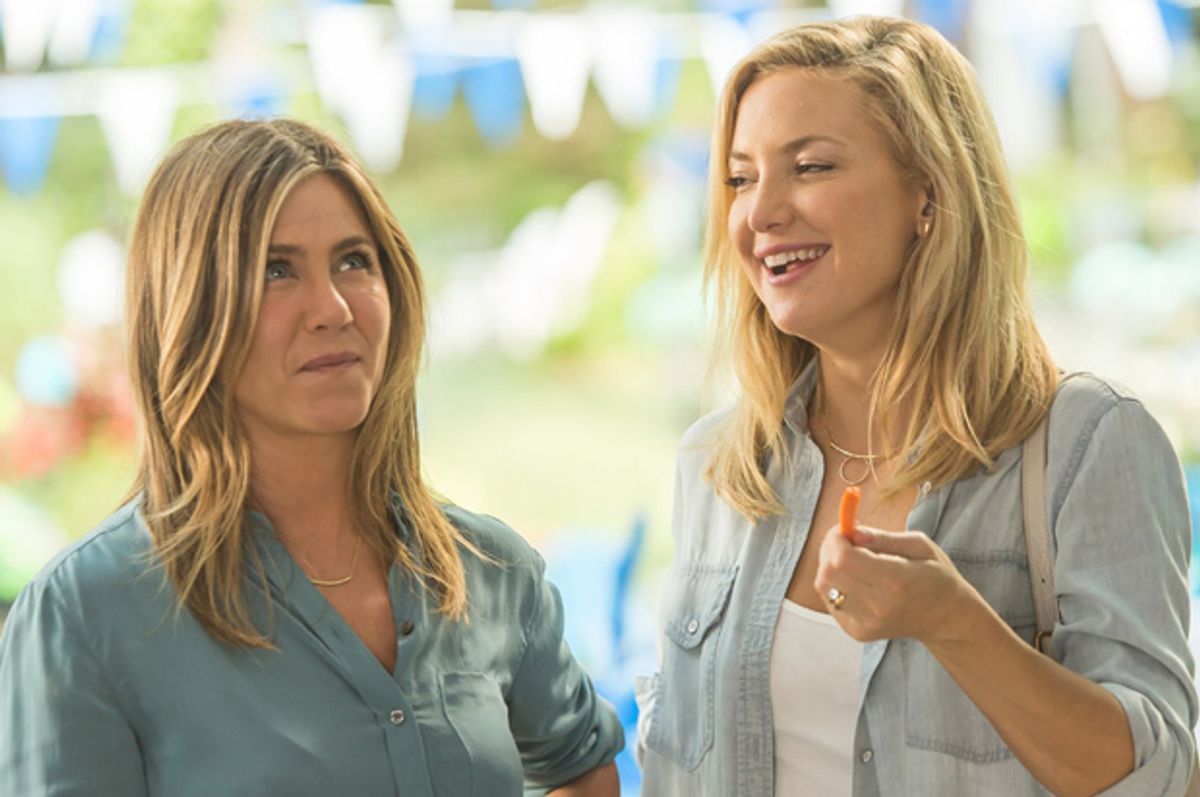 From a marketing perspective, “Love Actually” was such an ingenious idea that it’s a wonder film executives didn’t think of it sooner.

The 2003 film brought the ’70s disaster movie model—in which films like “The Towering Inferno” and “The Poseidon Adventure” amassed a litany of notable celebrities to narrowly avoid death—to the romantic comedy. Instead of Faye Dunaway, Steve McQueen and Paul Newman fleeing a burning building, director Richard Curtis, previously known for writing the screenplays to “Bridget Jones’s Diary” and “Notting Hill,” offered audiences a montage of British actors falling in love just in time for Christmas. The cast list, featuring Emma Thompson, Alan Rickman, Hugh Grant and Colin Firth, was so massively expansive that the average moviegoer statistically had to like someone in it.

By its very design, “Love Actually” is made to appeal to everyone. The strategy appears to have worked: Upon the film’s release, it earned $246 million worldwide. It was the second-highest-grossing comedy of the year—behind Nancy Meyers’ latest ode to middle-aged white women standing in kitchens, “Something’s Gotta Give.” Since then, Curtis’ film has far surpassed its competition in cultural reach. “Love Actually” is one of the millennium’s more improbable cult phenomenons, a yearly staple of cable programming around the holidays. (Whether or not the film is actually any good appears to be another matter.)

There’s an old saying in Hollywood that no one wants to be the first to something, but everyone wants to be the second. That means that when a movie makes money, audiences are burdened with a series of carbon copies designed to cash in on its success, a strategy subject to increasingly diminishing returns. After “The Hunger Games” popularized the teen dystopia genre, there were the young adult adaptations “The Host,” “The Giver,” and “The Maze Runner.” The last iteration of the “Divergent” series, starring Shailene Woodley as yet another reluctant rebel fighting to topple a totalitarian regime, was the series’ lowest-grossing yet. “Allegiant” made less than half of what its first installment earned in theaters.

The rush to cash in on the box office fortunes of “Love Actually” went in two directions. First, there was the “Christmas in bulk” genre, epitomized by ensemble comedies like “The Family Stone” and the later “Love the Coopers.” The most successful entry was the poorly received “Four Christmases,” which is a cast list in search of a movie. Amazingly, the movie starred four Oscar winners: Robert Duvall, Mary Steenburgen, Sissy Spacek, and Reese Witherspoon. For the kids, there was Vince Vaughn, coasting on the success “Wedding Crashers,” and for Mom and Dad, two country superstars rounded out the impressive cast list: Dwight Yoakam and Tim McGraw. The movie took in $120 million domestically, more than twice what “Love Actually” made in the United States.

The holiday hyperlink rom-com, however, took the goal of packing as many A-listers as possible into one movie to its furthest possible extreme. Directed by Garry Marshall, these films span from 2010’s “Valentine’s Day” to this year’s “Mother’s Day,” starring Julia Roberts, Kate Hudson, Jason Sudeikis and Jennifer Aniston. Each of these films is more or less the same movie: A group of (mostly) white people must decide who they want to snuggle up with during this iteration’s festivity. In a memorable “30 Rock” parody, Emma Stone and Andy Samberg try to find a date for Martin Luther King Day. Samberg would ask his officemate out, but temporary circumstance would get in the way. “Too bad we’re just platonic friends,” he sighs.

This spoof follows an earlier send-up from “Saturday Night Live,” which reimagines 2011’s “New Year’s Eve” as “The Apocalypse,” in which famous people rush to find love before the world ends. If these films have become a punchline as the genre reaches its inevitable nadir, however, their ironic treatment masks how absurdly popular the holiday hyperlink movie was. Aside from the first “Sex and the City” movie, “Valentine’s Day” boasts the biggest opening weekend of any romantic comedy in history. Even the less successful “New Year’s Eve” still made back twice its budget.

The term “hyperlink cinema” was originally coined by Alissa Quart in an essay for Film Comment, describing Don Roos’ indie comedy “Happy Endings.” The term would be popularized by Roger Ebert in his review of Stephen Gaghan’s “Syriana,” to describe movies that feature interlocking stories woven together by a meditation on a central motif. In “Crash,” released the same year as these two features, writer/director Paul Haggis posits that Los Angelenos have to get into car accidents in order to “feel something”—and bring to the surface the city’s deep-seated racism. The use of parallel storylines was also explored in movies like “Nine Lives,” “Babel,” and most recently “Cloud Atlas,” although the trend has died out in recent years.

If an underlying morality is intended to unite these disparate plot threads, Curtis' and Marshall’s movies only spell out their themes in the most basic of ways. In “Love Actually,” the film’s thesis is right on the label: The meaning of life is to love… actually. That’s admittedly difficult to square with the film’s more unsavory elements. One subplot follows Colin Frissell, a horny caterer who craves the flesh of nubile American girls. He procures a ticket to Wisconsin, where he meets a squad of bored, lonely supermodels (Elisha Cuthbert, Shannon Elizabeth and January Jones) and later absconds with them back to Britain. (They like his accent.) There’s very little question that when it comes to the fairer sex, romance is the last thing on Colin’s mind.

There’s even less of a connective thread in Marshall’s films. “Valentine’s Day,” the best reviewed of the director’s holiday trilogy, is like a collection of short stories that are less driven by narrative than the inevitable end goal of finding each of its characters happiness. For Sean (Eric Dane), a closeted pro football player, his quest for fulfillment entails coming out in order to keep his partner (Bradley Cooper) from leaving him. Liz (Anne Hathaway) is a phone sex operator who meets the perfect guy (Topher Grace), except for one catch: He doesn’t approve of her career. If the theme seems to be that love conquers all, that doesn’t quite extend to its director’s taste for conventionality. Like “New Year’s Eve,” the movie is so syrupy that it’s practically brought to you by Log Cabin.

As “Mother’s Day” proves, the reason that these movies exist isn’t for the sake of art. They are an act of well-orchestrated corporate synergy, designed as a product to get butts in the theater on a given day each year. Marshall’s most recent effort makes this embarrassingly clear. In the song’s introduction, the ubiquitous Meghan Trainor sings “Mom,” a pandering ode to the mothers in the audience. Take these choice lyrics: “You might have a mom, she might be the bomb/ But ain’t nobody got a mom like mine/ Her love’s ’til the end, she’s my best friend/ Ain’t nobody got a mom like mine.” Never one to let sap go to waste, Marshall actually recycles the number for the closing credits.

Aside from its shameless mommy-pandering, “Mother’s Day” is a clever bit of marketing designed to appeal to every possible demographic. Throughout the film, Marshall shoehorns people of color into the background, giving the picture an air of diversity and inclusion. Loni Love, who you might remember from VH1’s “I Love the 90s” series, appears as the token black friend to Bradley (Jason Sudeikis), a handsome gym owner grieving the loss of his wife. There’s also Max (Cameron Esposito) and Gabi (Sarah Clarke), a lesbian couple who build a womb float for a Mother’s Day parade. “Where in the world has such a gathering ever existed?” one might ask. The movie might be quietly radical if it made even a lick of sense.

Marshall’s films have always struggled to transcend their holiday-themed premise, but “Mother’s Day” is perhaps his most desperate effort yet. The film’s lowest moment entails Sudeikis’ character getting injured in a “hip-hop related accident” in order to have a meet-cute in the hospital with Sandy (Jennifer Aniston), a frazzled super mom whose son is having an asthma attack. When the two lock eyes, Sandy has her arm trapped in a vending machine, struggling in vain to free herself from its clutches. “Mother’s Day” no longer needs “Saturday Night Live” to lampoon its formula, now well past the expiration date. The movie is practically its own parody, except that no one appears to be in on the joke.

“Mother’s Day” is getting savaged by critics, and as tracking suggests, the film will become its director’s lowest-grossing film in recent memory. But if its failure symbolizes the final nail in the coffin of the holiday hyperlink movie, Marshall’s film is nothing if not a perfect symbol for today’s cinema. In the 13 years since the release of “Love Actually,” movies are increasingly driven by horizontal integration, corporate spectacles that appeal to both everyone and no one. The holiday hyperlink movie might be a punchline, but the template these films popularized is increasingly the norm. After all, “Mother’s Day” is nothing but “Batman v Superman: Dawn of Justice” for women.

Staring down another decade of superhero mashups (see: “Justice League”) driven by the same business model, “Mother’s Day” is the end of an era, but it’s also the terrifying beginning of a new one.