Death, carnage and chaos: How NATO became one of the most destructive forces on the planet

From Eastern Europe to Afghanistan and Libya, the military alliance has left a trail of devastation in its wake 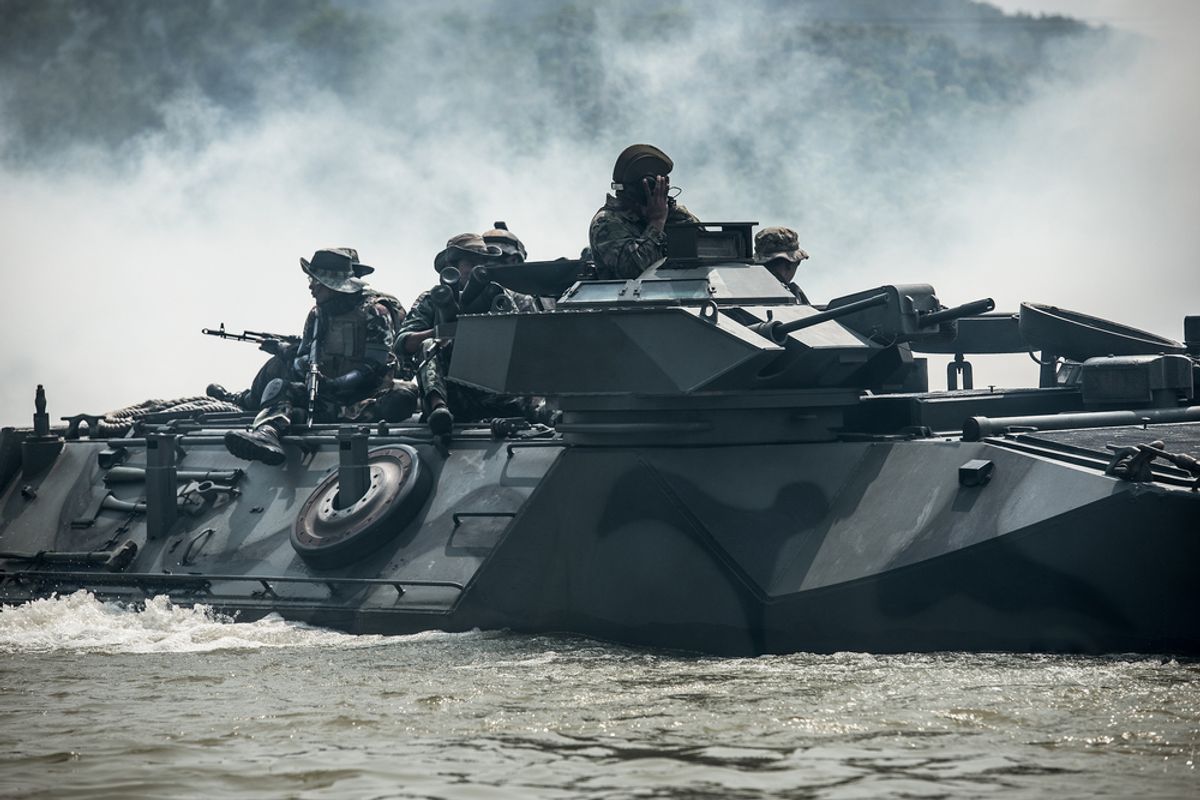 In May 2012, in the warm Chicago sunshine, I sat with journalist Jim Foley who had just returned from Syria. Jim and I had come for a large demonstration against a meeting of the North Atlantic Treaty Organization (NATO). War reporting in Afghanistan, Libya and Syria had not been easy on Jim, who was an easy-going man. “You can’t get what the Afghan people really think,” he said, when you travel with US troops and rely upon a US-military translator. Nearby sat a group of Afghanistan and Iraq War veterans who had planned to return their medals to their commanders. Jim had a great deal to say about warmongers, the merchants of war. NATO’s advocates were among them. They had come to celebrate their war on Libya. Meanwhile, in Libya, the devastation had spilled social toxicity across its landscape. This mattered little to NATO’s bureaucrats.

Jim would later return to Syria, where ISIL took him prisoner. Sadly, two years later, Jim would be the first American to be beheaded by ISIL on camera. He was another victim of a senseless war. At the NATO protest in 2012, one protestor carried a sign, “I can’t believe we still have to protest this shit.” I remember pointing that sign out to Jim. One more war, more civilians dead, more chaos produced, less security for all.

President Barack Obama went around Europe this week with two apparent purposes: to urge the United Kingdom not to sever its ties to the European Union and to plead with European countries to increase their military spending. European unity, Obama argued, was a force for good. NATO would only be able to function if Europe remained united and if it spent more on military goods. “I’ll be honest,” Obama said, “sometimes Europe has been complacent about its own defense.”

Europe is rife with political conflict. Southern European economies continue to splutter along on fumes. The defeat of the Grexit (Greece’s departure from the Euro) is temporary. When the pain of austerity rises once again, the politics of exit from Europe will return. In Spain, there is no government as the conservatives refuse to give up power to the anti-austerity bloc in parliament. The “refugee crisis” continues to rattle European societies, where an anti-refugee bloc has made gains at the ballot box. Austria is the latest test, where the far right anti-refugee party and the Green Party displaced the establishment parties in the presidential elections; it is the right and the Greens that will go for a run-off. It is this polarity between the Far Right and the Left that has broken the “centrist” consensus of European politics.

The politics of departure from the European project oscillate from the Right to the Left. It is the Right that sees “Europe” as the Trojan Horse for unbridled immigration, while it is the Left that sees “Europe” as the instrument of the Bankers. Britain’s departure—Brexit—is framed by the Right’s anti-immigration stance, while Greece’s departure— Grexit—developed out of the anti-austerity spirit. Even if Britain votes to stay in the European Union, bilious ideas about immigrants will not be defeated. They will fester. The anti-austerity bloc in Britain—the Scottish National Party and sections of the Labour Party—wants the country to remain in the European Union. It is prevented from making the case against Europe because of the strong anti-immigrant sentiment of that side of the spectrum.

Obama’s case for Europe is rhetorically about immigrants and refugees—although Obama’s own country has been tepid in its welcome to refugees from conflicts in North Africa and West Asia. A united Europe, Obama argues, is necessary for world security—that is the why European unity is important, and why a strong NATO is essential.

The question of refugees and security are not separate. NATO’s last major campaign—the war in Libya—destabilized the country and delivered it to human smugglers. It has become a major staging post for the refugee transit across the Mediterranean Sea. Victims of wars that have often been egged on by NATO powers and victims of trade policies pushed by European countries now line up on the Libyan shores and in Turkey, waiting for entry into Europe. Their countries have been vanquished by war and poverty. If the “security” strategies of NATO have produced refugees, why should NATO be strengthened?

Is NATO as essential to world security as Obama claims? NATO’s recent adventures—in Afghanistan, Eastern Europe and Libya—have created insecurity rather than order.

Afghanistan: When NATO entered the Afghan theatre in 2001, a decisive victory seemed imminent. Al-Qaeda fled the country and the Taliban fighters threw off their guns and went amongst the population. Elections followed and all seemed over. As the winter snows receded in 2002, the Taliban returned. Each spring they have come back, stronger and more determined to defeat their adversaries. This year has been no exception. The head of the International Committee of the Red Cross, Jean-Nicholas Marti, says that 2016 has already shown the highest number of civilian casualties—thirty per cent higher than last year. Opium cultivation has grown, and Afghanistan now ranks as the second highest refugee exporter to Europe. A UN report on education and healthcare in Afghanistan shows that the condition is dire and getting worse. “In 2015 children increasingly struggled to access health and education services due to insecurity and conflict-related violence, further exacerbated by high levels of chronic poverty,” says UNICEF chief Akhil Iyer. NATO has begun to gradually withdraw from Afghanistan, which is fated to return—in some manner—to Taliban rule.

Eastern Europe: Perhaps NATO’s most striking disaster has been its confident march eastwards. One of the deals conducts by the West and the Soviets that bears consideration is around the unification of Germany. The Soviets agreed to the unification if NATO promised to remain at the German border. NATO was not to threaten Soviet security. That agreement was broken sharply. NATO began to absorb eastern European states and to pledge economic benefits for integration into the military alliance. A weak Russia in the 1990s did little to complain. It watched as NATO bombed the Balkans in 1999—in a war that was public relations coup for Europe, which suppressed its own role in stoking Croatian and Slovenian secessionism to dissolve Yugoslavia (as the European Union’s Badinter Commission had promised in 1991). Missile Defense shields and membership to the Baltic States poked Moscow’s eye. The Ukraine conflict is a direct product of NATO’s expansion eastwards. Now American F-22 raptors fly to Romania, while the USS Donald Cook slips into the Baltic Sea towards Russian waters. At a NATO meeting, the Russian ambassador Alexander Grushko described the Western provocations as “attempts to exercise military pressure on Russia.” Then, most chillingly, he said, “We will take all necessary measures, precautions, to compensate for these attempts to use military force.” Rather than secure Eurasia from conflict, NATO has been an instrument for discord. Moscow’s interests in its neighborhood are maligned in the Western press as the habits of empire, while Western requirements for NATO’s intervention are seen in this media as acceptable.

Libya: NATO dashed into the Libyan conflict with the imprimatur of a United Nations resolution (1973). It far exceeded its mandate – to protect civilians—by going for regime change. It later refused to allow any international investigation—even by the UN—of its bombing in Libya. NATO was happy to bomb on a UN mandate, but would not permit any UN oversight. Libya’s state was destroyed by the bombing run, creating mayhem across North Africa. Al-Qaeda’s growth in Algeria, Libya, Mali and Tunisia can be directly attributable to the NATO regime change operation and the promiscuity of Western and Gulf Arab intelligence, which allowed Libyan fighters to go and fight in Syria. Many of these fighters also returned as the core of Libya’s branch of ISIS. What did NATO bring to Libya? Destruction and chaos.

Obama asks European states to drain their social funding toward military spending. He wants NATO to be stronger – surely not because he believes that NATO can solve the pressing security challenges faced by Europe. NATO and conventional European militaries will not be able to tackle the problems of terrorism. Hasn’t the example of Afghanistan and Libya shown that the West’s attitude towards crises seems only to inflame them further? Perhaps Europe was not being complacent, but only rational.

In a new collection in honor of Jim Foley–Ghazals for Foley (Hinchas Press), the poet Martín Espada remembers Jim’s work teaching refugees in Massachusetts. Foley was a young man whose curiosity about war led him to its frontlines. But war was his enemy. He preferred people. His death became a weapon for the Obama administration. The lesson could have been for the United States to take in more Syrian refugees. That would have been a tribute to Jim Foley. Instead, the lesson taken by the US government was to expand its war on Syria (most recently with 250 additional special forces inside Syria). Espada writes,

His face on the front page sold the newspapers in the checkout line.
His executioners and his president spoke of him as if they knew him.

The reporter with the camera asked me if I saw the video his killers
wanted us to see. I muttered through a cage of teeth: No. I knew him.

Once he was a tall boy from New Hampshire, standing in my doorway.
He spoke Spanish. He wanted to teach. I knew him. I never knew him.