Stop calling them conservatives! The new GOP of Trump & Cruz is the party of nihilism 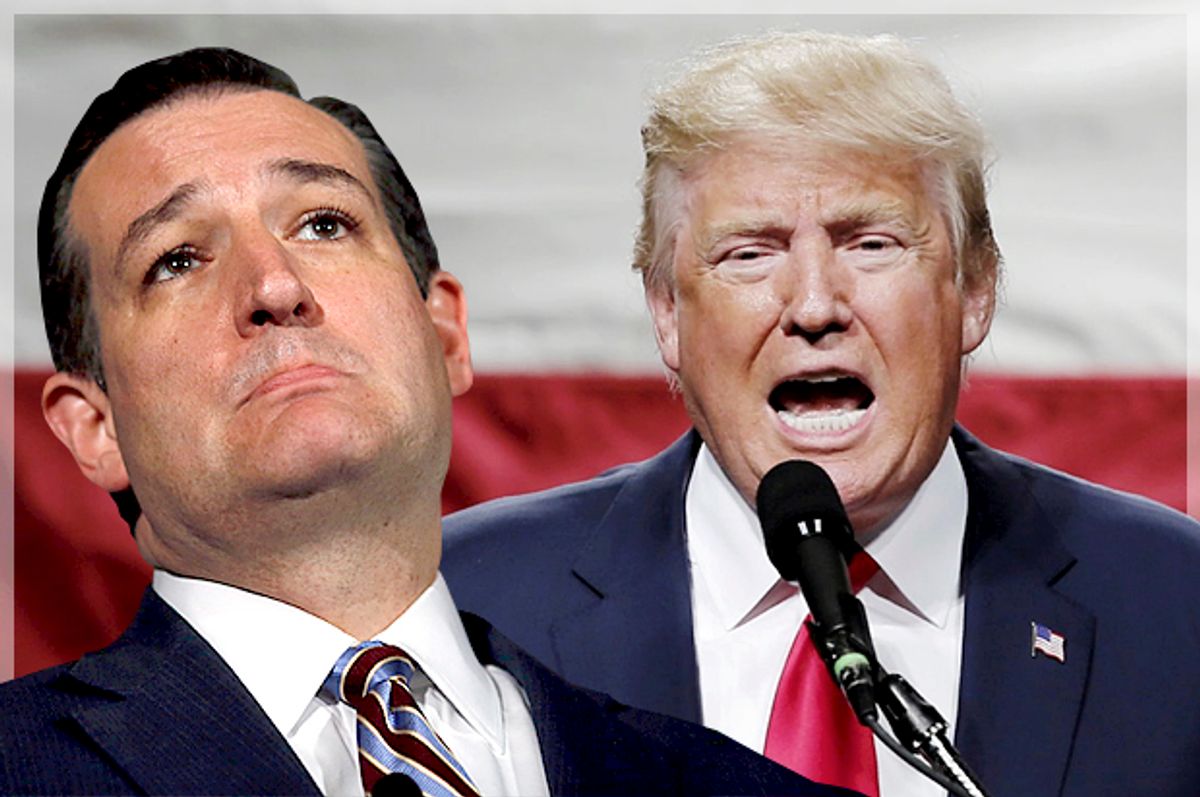 In a candid and often funny interview currently making the rounds, the recently retired Speaker of the House John Boehner let’s everyone know how he truly feels about the state of his own party, and what he thinks about some of the more extreme characters that exist within it. Not surprisingly, Boehner’s amusing assessment of Ted Cruz, whom he called a “miserable son of a bitch” and “Lucifer in the flesh,” made all of the media headlines.

But the former Speaker’s opinion of Cruz wasn’t even the most telling. That came when he mocked his party’s almost religious worship of former president Ronald Reagan, especially by the more radical members: “I love these knuckleheads talking about the party of Reagan. He would be the most moderate Republican elected today.”

Indeed he would be.

Of course, Reagan was by no means a moderate. He was a staunch conservative who led the way in union busting, weakening the safety net, slashing taxes for the very rich, and deregulating various industries. But he was not an extremist — or, perhaps a better word for today’s Republicans, a nihilist. Reagan did not view compromise as sinful or treasonous, as many of the so-called “conservatives” of today do. He did not believe in destructive scorched earth tactics, like shutting down the federal government or refusing to even consider judicial nominees for a sitting president. And he was not so extreme in his views that he couldn’t change his mind on important issues when confronted with new evidence. Just consider his shift on gun control.

Mike Lofgren, a Republican who worked in Washington for thirty years as a congressional aide, notably under current presidential candidate John Kasich, recounts in his book "The Party is Over" how the GOP went from being a traditionally conservative party to a radical right party:

“By the 2000 election, and certainly after 9/11, the Republican party was no longer a conservative party in the traditional sense, as that word has been understood in Western political culture. Its belief in polarizing language and tactics, a militant and militarized foreign policy, and a constant search for moral enemies, foreign and domestic alike, qualifies the current GOP as a radical right-wing party, not a conservative one. In his flawed but occasionally insightful book Democracy and Populism: Fear and Hatred, historian John Lukacs reminds us that “right wing” is not a synonym for conservative, and is not even a true variant of conservatism, although the right wing will opportunistically borrow conservative themes as the need arises. Hence, red is an appropriate color for a radical party like the present-day GOP.”

The GOP’s degeneration into a party of extreme nihilists and egotistical showmen can be traced back to the '90s, when Newt Gingrich virtually led the party as Speaker of the House. The former speaker was Ted Cruz’s spiritual predecessor, a loud, hypocritical, destructive, egomaniacal demagogue who relentlessly attacked President Clinton — who ended up signing some of Newt’s most reactionary legislation into law — over petty matters, including his sexual life. (Of course, Newt was a serial adulterer himself.)

“Newt would make a lousy George Washington, but he was one hell of a Robespierre,” quipped Lofgren in his aforementioned book.

The '90s were just an appetizer for Republican nihilism. The GOP truly jumped the shark and embraced Bolshevism of the right, so to speak, after the election of Barack Obama. The Tea Party movement, funded by billionaire ideologues like the Koch brothers, emerged in protest of the black Muslim socialist with an American-hating pastor who also happened to be an Ivy League elitist under the thumb of Wall Street. (President Obama is a true Renaissance man.)

From day one, everything Obama touched or supported was considered treasonous, regardless of what it was. The stimulus package —  which even the right-wing business advocating Chamber of Commerce endorsed — was universally opposed by Republicans out of spite. (It was also a matter of Public Relations; they knew it would pass, but didn’t want to give it any kind of bi-partisan legitimacy.) The Affordable Care Act, which was directly modeled after Mitt Romney’s “Romneycare” — a plan that had been praised by the right-wing think tank Heritage Foundation as a “patient-centered market” a few years earlier — was universally scorned by Republicans as socialism. Currently, dozens of the president's judicial appointments, including his Supreme Court nominee, are being obstinately blocked by Republicans, even though many, like Merrick Garland, are moderate in their political and judicial outlook. One could go on and on about GOP obstructionism, but it quickly becomes tedious.

Now, the George Will’s and David Brooks’ of the Republican party have widely condemned Donald Trump as a fake conservative, and they’re not wrong. Trump is clearly not conservative — but neither is the Republican Party. And as troubling as this may be for Charles Koch and the scribblers at National Review, Trumpism is the future of the party. (Koch, of course, helped fuel the radical right that has taken over Republicanism, and now claims to be disgusted by Trump’s rhetoric.) Over the past several decades, the party has become an increasingly friendly place for the Trumps and Cruzes and Carsons of the world — the kind of characters who used to make up the John Birch Society. But no longer are these outlandish characters considered fringe. And for the sake of John Boehner’s mental well being, he is lucky he got out when he did.