With Trump racking up endorsements from Mike Tyson and Bobby Knight, the Indiana primaries couldn't get any weirder 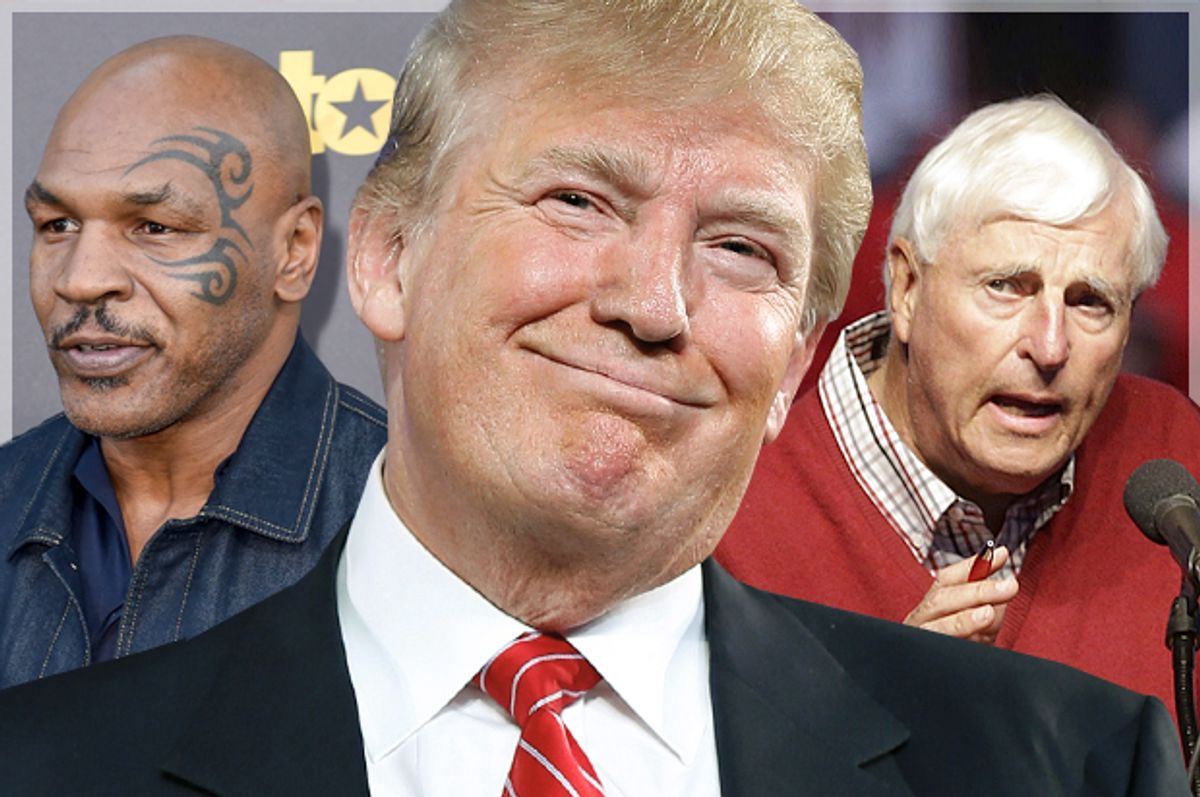 First, the good news: We are very nearly to the end of this exhausting, enervating primary season. Only 10 states have not yet voted, plus (on the Democratic side), the District of Columbia and a couple of territories. And about half of the remaining states all vote on one day, June 7.  Just a few more weeks, and we can all start trying to rebuild relationships with friends and loved ones.

Now the bad news: Oh God there are still 10 states plus, on the Democratic side, the District of Columbia and a couple of territories to go. That means six more weeks of Donald Trump rallies and Ted Cruz and Carly Fiorina doing their impression of the worst vaudeville duo to hit a stage since Yiddish theater was popular. Six more weeks of John Kasich stuffing food so hard into his face you half-expect to hear Marlon Perkins narrating off-camera. Six more weeks of fans of the two Democratic candidates snarling at each other like a couple of San Diego news teams.

And then, the general election!

Now that you are thoroughly depressed, let’s take a look at where the race stands as the campaigns roll through Indiana for this Tuesday’s primary.

In the Democratic race, Indiana is the third-biggest prize in terms of numbers of delegates available. At the moment, the RealClear Politics polling average has Hillary Clinton up by six and a half points. Even if Bernie Sanders can come from behind and edge past her, he won’t net more than a delegate or two. Which means after Tuesday night, the shape of the race will not have changed.

Sanders and his campaign seem to have tacitly admitted they cannot catch up to Clinton, and are now in it to amass as many delegates as possible before the July convention in Philadelphia. The hope is that these delegates can force the Democrats to accept a more progressive party platform and some changes to its primary electoral process, among other things. Essentially, the next few weeks for the Sanders campaign are all about laying groundwork for the future of the progressive wing within the Democratic Party. But as far as the presidential nomination is concerned, it’s all over but the shouting.

And no, I am not entertaining arguments about super-delegates. With the nomination clinched and Clinton currently holding a raw vote margin of three million or so over Sanders, a margin that is not going to appreciably shrink and might even grow in the next few weeks, super-delegates are not going to abandon her. Save your energy.

The shape of the Republican race will also not change after Tuesday. At the end of it, you can expect Donald Trump to be less than 200 delegates away from that magic 1,237 number he needs to clinch the nomination. RealClear Politics average has him up by only 2.3 percent, but that is skewed by one poll that went big for Cruz, while all other polls are showing a large Trump lead. Which leads one to think that the Downs Center poll is a weird outlier.

All the fun, if one can call it that, on the Republican side comes from wondering what else Ted Cruz can do to screw himself over. He’s already ruined the movie “Hoosiers” for all eternity by re-enacting a famous bit from the film in the actual gym used by the real-life high school basketball team on which the movie was based. He referred to a basketball rim as a “ring,” which no one has ever done except for the people who wrote the NBA’s official rule book. Sure, Cruz has said much, much worse in this campaign, but not in basketball-crazy Indiana.

On Friday, the Texas senator picked up the most lukewarm endorsement since Twentieth Century Fox executives read the script to “Star Wars” and said, “Eh, sure, whatever.” Indiana Indiana governor Mike Pence announced that while he doesn’t have anything against Donald Trump, he’s still going to vote for Cruz on Tuesday. Either he’s terrified of the wrath of Trump voters, or Pence finds Cruz as unlikable as everyone else does.

Speaking of that, it continues to amaze just how much people dislike Ted Cruz. On Friday afternoon, Marco Rubio, who once almost burst into tears after watching a riot at a Trump rally, indicated he has started coming around on the candidate. He could endorse his fellow Republican senator, but he’s going with the walking Orange Julius instead. Remarkable.

As for Trump, it remains to be seen if there is anything he can do to convince people he secretly wants to lose this race. This week he has been touting the endorsement of Mike Tyson, the former pro boxer who spent three years in an Indiana prison for raping an Indianapolis woman in 1991. I’m all for giving convicted felons a second chance when they have long since served their debt to society, but if Trump cares at all about improving his unfavorable numbers with women in particular, which he will need to do to win the general, this seems like a bad move.

Trump also has been barnstorming around the state with Gen. Buck Turgidson…excuse me, with Bobby Knight, the legendary former Indiana University basketball coach who was fired for choking a student. Knight has been telling audiences that he likes Trump because the New Yorker would have the “guts” necessary to drop nuclear bombs on his enemies. (Watch out, Republican National Committee headquarters!) For any other candidate, such a surrogate would have to be denounced. For Trump, it probably means a few more votes in Terre Haute.

There are 57 delegates at stake for Republicans on Tuesday, and Trump is likely to nab upwards of 50 of them. Even if Cruz can grab a few, he and his desperation play of a running mate are still just a bug on the windscreen of Trump’s unregistered jet at this point. It’s highly doubtful they will keep him from that 1,237 magic number before Cleveland. But Cruz has been trying to stack the convention’s rules committee with his own delegates, and there is no reason to think he’ll back down from a floor fight for the good of the party. Which means you should lay in a supply of popcorn. Even with the nomination all but wrapped up for Trump, there is still plenty of fun to be had in the next six weeks.