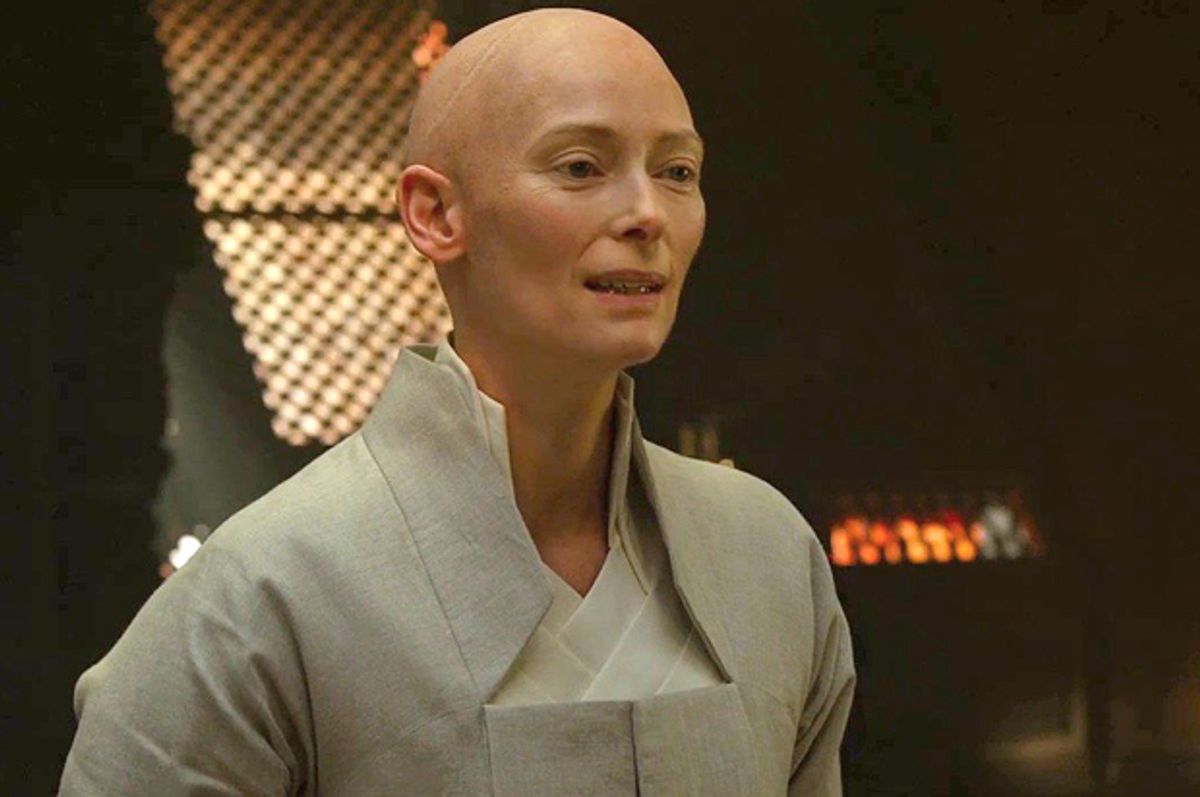 Tilda Swinton as Ancient One in "Doctor Strange" (Marvel Studios)
--

In a recent interview, "Doctor Strange" screenwriter C. Robert Cargill insisted that the casting of the iconic the Ancient One was “absolutely unwinnable.” Asked by the hosts of the Double Toasted podcast about the decision to cast Tilda Swinton as a traditionally Asian character, Cargill declared, “It all comes down onto which way you're willing to lose,” listing off a litany of concerns. The character himself, as historically depicted, is a “racist stereotype.” And because he is from Tibet, “a region of the world that is in a very weird political place,” to recognize his origins is to “risk alienating one billion people who think that that's bull shit.” The background of Doctor Strange is itself Orientalist, another “white guy goes to the Orient and adopts their ways and it's a great white hero story.” Faced with this supposedly losing proposition, Cargill claimed that director and co-screenwriter Scott Derrickson decided to “give a great meaty role to an actress.” “The hill Scott decided to die on was the one of feminism,” Cargill said.

The metaphor is an apt one, for Cargill seemed to point to a casting choice that challenged gender assumptions as somehow redemptive for its catering to racial ones. But it is possible to simultaneously challenge both. (Intersectionality might have been a better resting place for Derrickson.) Cargill's rhetorical technique is also entirely disingenuous. Yes, he, Derrickson, and their fellow screenwriters are all white men. But Cargill did note that critics have suggested Michelle Yeoh, a Chinese-Malaysian actress, as an alternative casting choice, and is thus presumably aware that minority women exist.

At times, Cargill seemed to justify harsh critiques, but blamed his Marvel predecessors for creating such an “awkward” character to begin with. A host leaped in to present a sympathetic analysis. “All these characters were created back in the early '60s,” he offered.

“By a bunch of white men,” Cargill noted, with nary a hint of self-awareness.

Yet though he acknowledged that “everyone has a right to be upset,” Cargill repeatedly referred to people who are as “the social justice warriors” with an air of scoffing dismissal. After one of his countless self-congratulatory mentions of Derrickson's deigning to cast Oscar-winning Swinton in his film, he echoed his earlier sentiment that this was a lose-lose situation. “Everybody kind of pats us on the back for that and then decides to scold us for her not being Tibetan,” he said, as though those seeking greater representation are nagging harpies. Cargill consistently exhibited a pigheaded refusal to acknowledge that people might actually care about these issues for reasons that are non-performative.

Even if we grant Cargill that he had no explicit role in the casting decision he vehemently defended, he conceded that the premise of Doctor Strange is fundamentally racist, albeit with a tone of faux self-importance. He did so as further evidence that he could do no right by the social justice brigade, that even if he had cast a Tibetan actress in the role of the Ancient One, he would have been left with a “great white hero story.” Did it honestly never occur to Cargill or either of his colleagues that they were changing the race of the wrong character? That this problem might have been remedied by presenting audiences with a Tibetan-American protagonist, and with more Asian characters, not fewer? If so, the sheer lack of imagination is astounding.

Adopting a more cynical view, the screenwriting team was working under creative limitations that were self-imposed. In attempting to prove that the Ancient One is a “cultural landmine,” Cargill elaborated on concerns that casting a Tibetan would have turned off Chinese viewers. He cannot possibly believe that the entire, billion person population of China has monolithic views on Tibet and categorically refuses to acknowledge that there are people who are from there. His next comment was more revealing. “[You] risk the Chinese government going, 'Hey, you know,' one of the biggest film-watching countries in the world, 'we're not going to show your movie because you decided to get political,'” he said.

The implication is that, when it came to the Ancient One's race, a decision was made to take no stance. But white is not neutral. Constructing white characters for white actors is also a political choice. Ultimately, Cargill's attempts to grapple with these issues, which many would have viewed as an interesting creative problem, amount to no less than whining that his handsomely compensated job is too hard. Well, then, perhaps he should get another one. One that does charge him with controlling the images that will be projected on screens worldwide, filled with messages that tens of millions of people will absorb.

Which raises a far more difficult question than any that was asked of Cargill. I am generally not a fan of boycotting art– if you will recall, I exchanged government-issued currency for a ticket to "God's Not Dead 2" – and think that consuming culture is crucial to developing a shared language around the difficult issues it explores. But in this case, no further intellectual legwork is needed. Cargill has acknowledged the legitimacy of counterarguments, but refuses to modify his stance or even tone accordingly. And he has made clear that the only way such criticisms will be respected rather than ridiculed, the only way they will have the power to alter decision-making processes, is if they pose a serious threat to a film's financial success. It is now up to Asians and their allies to decide whether thoughtful, conscientious inclusion is a hill they're willing to die on. To decide which way, so to speak, they're willing to lose.