"Cool Girls" don't like Hillary: What "Gone Girl" and "30 Rock" taught me about politics, feminism and smashing the dude-bro patriarchy

She's shrill, a robot, a total buzzkill—and Liz Lemon would be proud of how she's running with the "woman card" gag 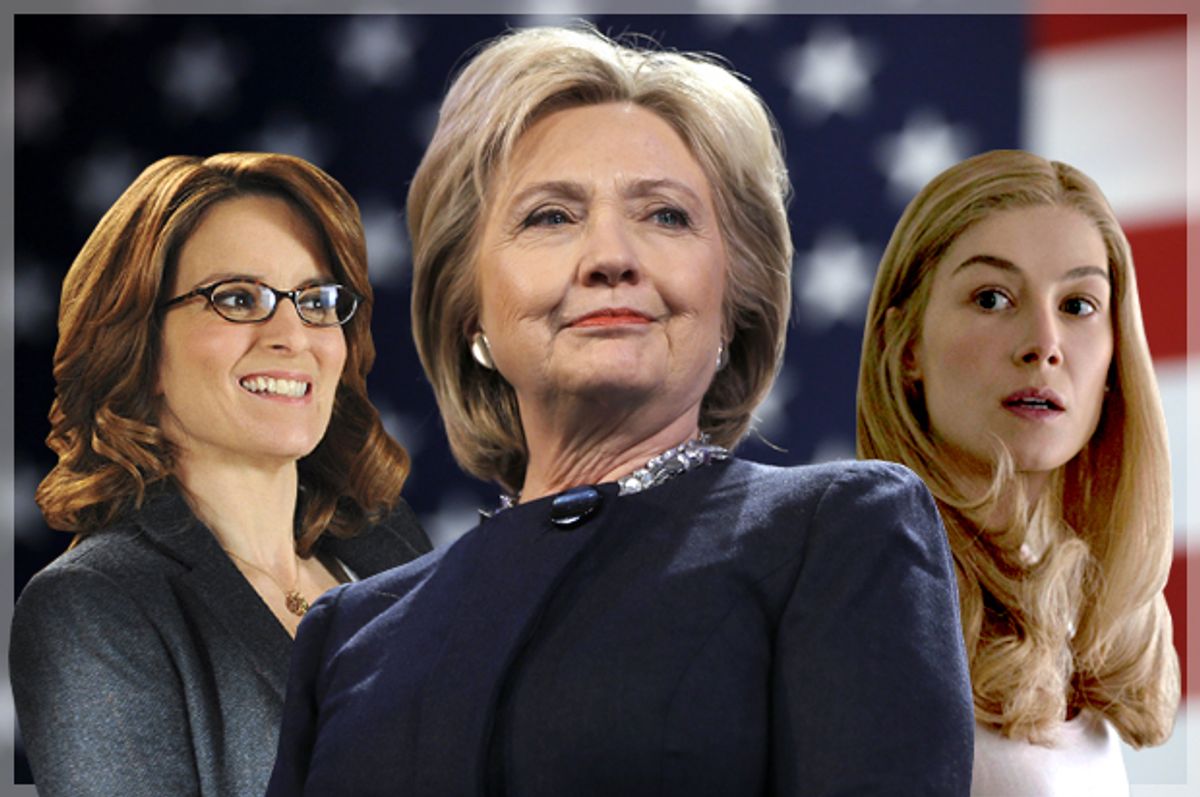 “I am supporting the good Secretary Clinton...” I say to the self-disclosed conservative male in the passenger seat, avoiding eye-contact and flattening my voice out of its typical shrillness. At my liberal arts college in southwest Virginia, the student body tends to be either militant Bernie supporters or Facebook Republicans — those students who are too afraid of the Bernie Bros to admit to liking Ted Cruz outside of the Internet. Hillary Clinton supporters like me tend to be pretty quiet about it. We confess our loyalty to the pantsuit brigade hesitantly, bracing ourselves for the inevitable barrage of “WHAT ABOUT BENGHAZI?!”

I usually mumble something about how incredibly qualified she is, biting back the desire to answer them truthfully: Hillary Clinton could be paying Planned Parenthood to make her custom pantsuits, and I would still vote for her.

I am so tired of adopting an apologetic tone and a lack of eye-contact when I tell people my age that I’m with her. When my body and tone radiate defensiveness, I know, deep down and guiltily, that I am not apologizing for Bill or Benghazi — I am apologizing because Hillary Clinton is not a Cool Girl, and it is not cool that I like her. Hillary is not a Cool Girl, apparently, because she is cold, disaffected, a creepy robot, a feminist, a bitch.

The idea of the “Cool Girl” originated in Gillian Flynn’s bestselling 2012 novel “Gone Girl,” which gave a name to the idea of a woman who has been socially conditioned to please men by acting in such a way that combines masculinity and femininity. The Cool Girl does not rock the boat; she is not a threat to male authority. She is pretty, funny, and even smart, but she is not a serious challenge to the patriarchy.

Pop culture is inundated with these women who have to look like they live on one grape a day while simultaneously drinking barbecue sauce through a straw and shot-gunning Busch Lite like a fifth-year frat boy. The Cool Girl boasts just the right amount of sports knowledge while knowing exactly what to wear at all times. She may be smart, but she isn’t as smart as a man, and she definitely isn’t a feminist who supports Hillary Clinton.

Like the conservative guy in the passenger seat of my Honda Civic, men my age (and probably most people) are not receptive to being angrily lectured.  Listening to a feminist rant about the patriarchy is very uncool. It is what Donald Trump would call playing the “woman card,” when what he really means is playing the “bitch card.”

So is this what I’m left with?  Embarrassed by my allegiance to feminism or shamed into trying my hand at the one-grape-a-day diet? Am I doomed to be either a bitch or a Cool Girl?  Perhaps there is a third option in this feminist vs. cool girl dynamic: tackling the absurdity of the situation with humor. No one has been quite so influential in helping me to realize this than the female comedians that I have grown up reading and watching.

The popular among hipsters and feminists (and 14-year-old girls from Kentucky who were trying to be both) sitcom “30 Rock” is often lauded for its biting satire of current events during the show’s seven-year run from 2006 to 2013. “30 Rock” created a dynamic and wry commentary on gender and the struggles of women in the workplace, particularly in roles of authority over male coworkers.

Liz Lemon, played by (my hero since the age of 14) Tina Fey is not a Cool Girl. She is an awkward, outspoken feminist who exists under the symbolic patriarchy of her boss, Jack Donaghy (Alec Baldwin), a conservative who worships at the metaphoric feet of Ronald Reagan. While the two maintain a profoundly platonic friendship, it is frequently made clear that Jack does not respect Liz, because she is not a Cool Girl and does not use her intelligence for the betterment of the patriarchy. During the 2012 election, Liz and Jack spar on who the best presidential candidate is, Mitt Romney or Barack Obama, when they realize that one of the actors on “TGS” has the power to swing the outcome of the election using her Florida fanbase. Jack treats Liz’s political leftness with a lack of seriousness:

Jack: Since you've known me, I've been right about no less than everything, always. Yet you persist in this impotent, emotional weltanschauung, and it's not just politics. For instance, I bet you bought those hideous shoes for some emotional reason.

Liz: Every pair you buy, they give a pair to a child that was forced to work in the factory that makes these shoes.

In a Cool Girl juxtaposition to Liz’s awkward feminist, we have the conventionally beautiful and conservative Avery Jessop, Jack’s love interest. Avery manages to boast the perfect combination of traditional femininity with just a dash of masculinity, planting her firmly in the camp of patriarchal supporter. Her obedience to the patriarchy earns her a level of respect that Liz is not fortunate enough to command. Jack is both interested in and respectful of her:

Jack: So, where did you go to school?

Avery: Choate, then Yale, then two years in Africa with the Peace Corp.

Avery: Oh no, the Peace Corp, Lawrence Peace’s corporation. We drilled for oil in gorilla habitats.

Fey’s ability to point out the absurdity of the Cool Girl vs. feminist paradigm puts her in the third category: using humor as a tool to subvert the patriarchy. While Jack Donaghy may win nearly every scenario within the show, the social commentary provided by the scenes above work to undermine real-life patriarchal superiority with comedy. Absurdity is often best pointed out not with feminist rants, but with humor, with weird jokes about drilling in gorilla habitats and wearing sweatshop shoes.

Feminist scholar, poet, and all-around badass Audre Lorde tells us that “The master's tools will never dismantle the master's house. They may allow us temporarily to beat him at his own game, but they will never enable us to bring about genuine change.” We can try to redefine what’s cool, but sometimes the best way to do that is with a sense of humor.  The Clinton Campaign picked the third option in giving out “Woman Cards” to its donors—Clinton took Trump’s attempts to make working for the rights of women uncool and completely turned it on its head. And according to her campaign, it's working: $2.4 million raised from the initiative, with 40 percent coming from new donors. Maybe Hillary Clinton is a bitch, and maybe I am a bitch too. But as Tina Fey once said in another spectacular subversion of the patriarchy: “Bitches get stuff done.”