It's time to get real about the Obama legacy: Why his economic record is much more complicated than either party wants to admit

Republicans deride the president for a largely imagined set of failures. But Democrats are overstating their praise 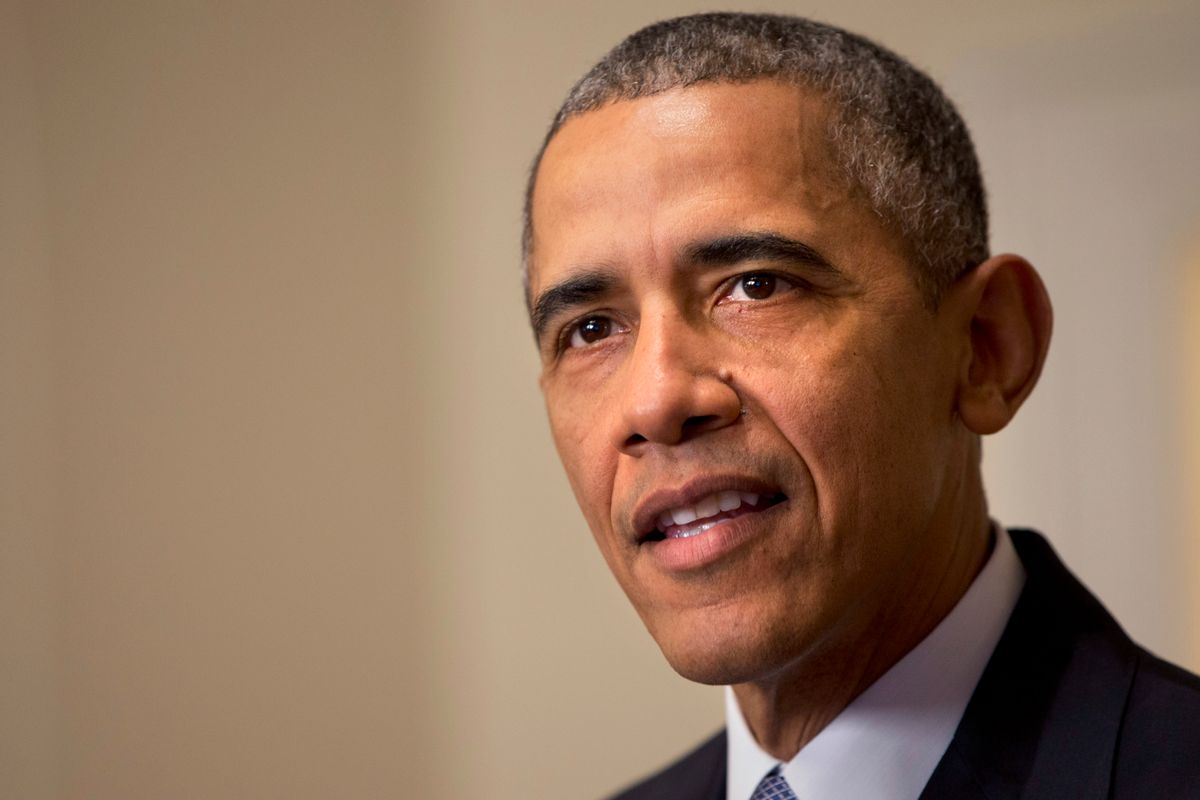 FILE - In this Saturday, Dec. 12, 2015 file photo, US President Barack Obama speaks about the Paris climate agreement from the Cabinet Room of the White House in Washington. About 160 countries are expected to sign the Paris Agreement on climate change Friday, April 22, 2016, in a symbolic triumph for a landmark deal that once seemed unlikely but now appears on track to enter into force years ahead of schedule. The U.S. and China, which together account for nearly 40 percent of global emissions, have said they intend to formally join the agreement this year. (AP Photo/) (AP/Jacquelyn Martin, File)
--

In a recent wide-ranging interview with New York Times columnist Andrew Ross Sorkin, President Barack Obama candidly discussed the economy and his administration's economic legacy, which, depending on who you ask, is a tremendous success story or a complete disaster.

(Of course, this means that the truth is somewhere in the middle, although most economists and historians will undoubtedly lean towards the former.)

One cannot begin to discuss “Obama’s economy” without addressing the economic crisis that he inherited from his predecessor, and the actions his administration took to stave-off disaster. The first months of his presidency very much determined the following seven years. And on the various measures taken to prevent a depression (e.g. bailouts, the stimulus), Obama is clearly disappointed with his administrations failure to properly sell the policies to a wary public (which very much helped Republicans).

“We were moving so fast early on that we couldn’t take victory laps,” explained Obama. “We couldn’t explain everything we were doing. I mean, one day we’re saving the banks; the next day we’re saving the auto industry; the next day we’re trying to see whether we can have some impact on the housing market... If we had been able to more effectively communicate all the steps we had taken to the swing voter, then we might have maintained a majority in the House or the Senate.”

Today, the overwhelming majority of economists agree that the stimulus rescued the nosediving economy and prevented another great depression — and most believe that an even bigger package would have hastened the recovery.

Of course, expert consensus is not something that Republicans usually hold in high regard, as the climate change debate frequently reminds us. And while the Obama administration took necessary steps to save the economy, the GOP — which was thought to be on the brink of extinction in 2009 — took advantage of a Democratic majority government during a time of extreme crisis, and obstinately refused to give the popular new president any kind of bi-partisan legitimacy. (People tend to forget that Obama ran as a post-partisan reformer.)

The GOP adopted a kind of militant political nihilism, and was ready to throw the economy over a cliff before working with the president and congressional Democrats (some Republicans have shown less outrage over their former Speaker Dennis Hastert’s child molestation accusations than when one of their own shows a willingness to compromise with Democrats).

Selling the stimulus was never going to be easy for Obama. As Michael Grunwald explains in his book, "The New New Deal: The Hidden Story of Change in the Obama Era":

“The stimulus had one overriding public relations problem: The administration marketed it as a measure to prevent rampant unemployment -- and then rampant unemployment happened anyway. Americans understood that Obama inherited a mess, but they didn’t understand how horrible a mess, and the stimulus was touted as a job creator at a time when jobs were disappearing at record speed.”

Republicans recognized this, and ultimately won the PR battle. Even Democratic politicians became heedful of the word "stimulus," which did not help their cause politically. The Tea Party movement was partly a reaction to the Wall Street bailouts and the very real cronyism in Washington (as well as the election of a perceived Muslim socialist). But with Democrats in charge of government, GOP leaders managed to exploit this angry reaction and direct it at “big government,” instead of the real culprits — e.g. corrupt government, fraudulent banks, an unregulated financial market, monopolistic corporations, job-killing free trade deals, etc.

Today, even as unemployment and the budget deficit fall to eight-year lows (Obama has cut the deficit by about two-thirds), many Americans continue to believe that the Obama economy has been a failure. “If you ask the average person on the streets, ‘Have deficits gone down or up under Obama?’ probably 70 percent would say they’ve gone up,” said Obama. “And if you have a political party — in this case, the Republicans — that denies any progress and is constantly channeling to their base, which is sizable, say, 40 percent of the population, that things are terrible all the time, then people will start absorbing that.”

While the Obama years have not been the economic disaster that Republicans love to claim, neither have they been years of far-reaching progressive reform that some Democrats like to imagine. Obama has ultimately governed as a finance-friendly centrist — and, considering that his initial economic team was full of Clinton administration veterans like Lawrence Summers and Timothy Geithner, this is not surprising. The president’s policies have been more neoliberal than progressive — as most recently evinced by his unwavering support of the TPP.

In his new polemic, "Listen Liberal: What Ever Happened to the Party of the People," Thomas Frank explores how the Obama administration could have done much more in terms of economic reform, and how it essentially squandered the once-in-a-century opportunity with the economic crisis:

“It would have been massively popular had Obama swung the wheel of the ocean liner and reacted to the financial crisis in a more aggressive and appropriate way. Everyone admits this at least tacitly, even the architects of Obama’s bailout policies, who like to think of themselves as having resisted the public’s mindless baying for banker blood. Acting aggressively might also have countered the sham populism of the Tea Party movement and prevented Republican reconquista of Congress...Obama could have questioned or even unwound Bush’s bailouts; he could have fired the bad regulators who let it all happen; he could have stopped the AIG bonuses instead of having his team go on television to defend them; he could have bushed to allow bankruptcy judges to modify mortgages; he could have put the “zombie banks” into receivership; he could have shifted FBI agents back to white-collar crime; and so on. Obama did none of it.”

Has he been better than a Republican? Of course... but is that really something worth bragging about? As Obama said in the same interview, the economic platforms of current Republican presidential candidates “don’t simply defy logic and any known economic theories, they are fantasy.”

According to various analyses, Donald Trump’s tax plan — which slashes taxes for the very wealthy — would add about $10-12 trillion to the debt over the next decade. And yet, the blowhard billionaire has claimed that the plan is revenue neutral (a fantasy) and that he could eliminate the debt in eight years — which is not only economically impossible, but economically idiotic. Trump appears to have very little understanding of macroeconomics — or is he simply bullshitting? Either way, a large chunk of Americans can’t tell, and are enamored by his so-called authenticity.

Eight years after Obama was elected, we have seen anti-establishment candidates take over both party primaries, which begs the question: What if Obama had taken a more populist approach in governing? As Frank points out, it would have extremely popular and politically beneficial for Obama to have been tougher on the abhorred financial institutions and to have fought harder for the millions of American families that were losing their homes.

Unfortunately, the president has always been a centrist at heart (his favorite columnists are the neoliberal caricature Tom Friedman and the chief defender of the establishment, David Brooks, for crying out loud!); as if the middle of the road is the morally superior path. But this way of thinking assumes that both sides are equally in the wrong — that the left and right are both too politically radical, and their policies too extreme. After dealing with Republican nihilists for seven years, I should hope the president has abandoned this faulty reasoning.

Conceivably the most revealing fact about Obama’s economy is that both income and wealth inequality have continued to increase rapidly, and are now at historic levels. Could Obama have better addressed this “defining challenge of our time” if the Democrats had a majority in Congress? Perhaps. But the first two years of the Obama administration had a Democratic majority, and the president took a non-disruptive centrist approach. Why should we think that this would have changed with a more favorable Congress?

There have been economic triumphs and failures under Obama, and — truth be told — presidents tend to get more credit or blame than they deserve when it comes to the economy. But had the president taken bolder measures in 2009 and emulated the rhetoric of FDR, circa 1936, things may very well have turned out differently.