Salon talks to frontman Gary Louris about Prince, David Foster Wallace and why he and Mark Olson will never reunite 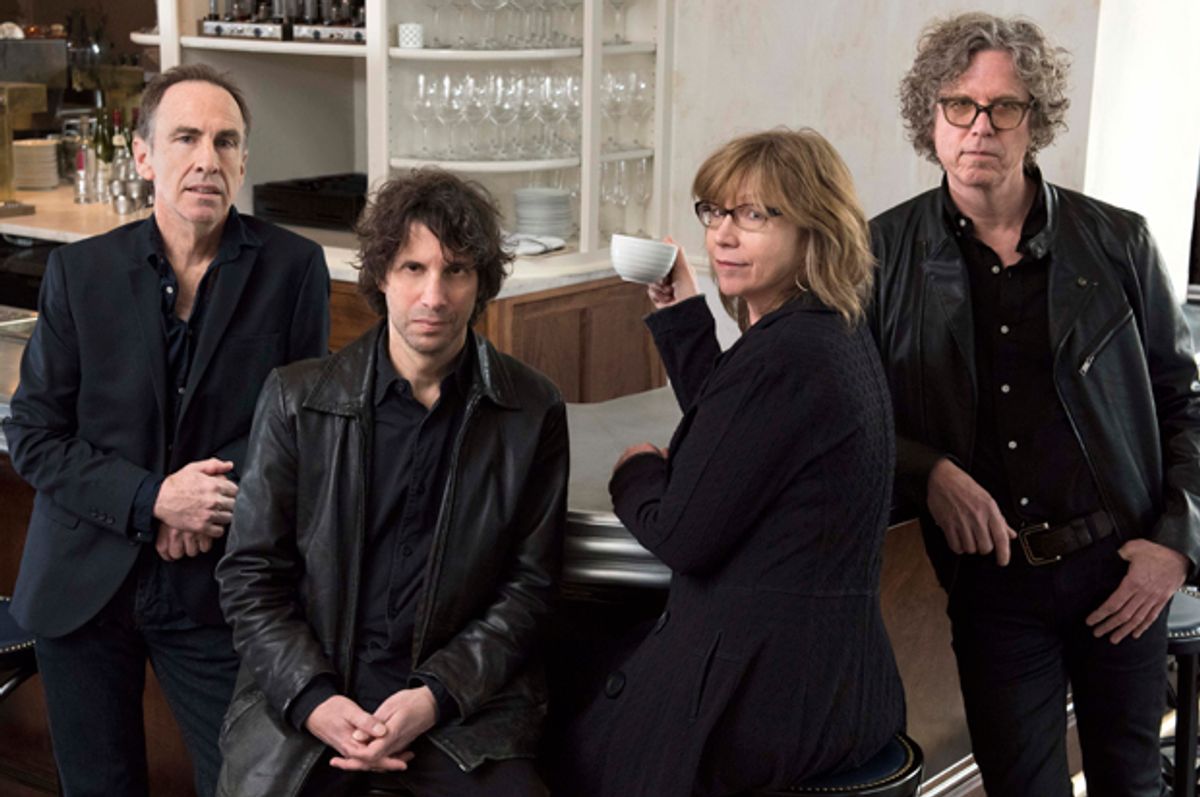 One of the consistently great bands of the last few decades, The Jayhawks have brought country folk together with electrified British-style rock and various other strands since the mid-‘80s. On some of their work, the voices of Gary Louris and Mark Olson added an Everly Brothers-like quality to the strong playing and memorable songwriting. But like many great partnerships, this one got ugly.

Five years ago, the two came together for “Mockingbird Time,” which felt like a throwback to the group’s classic ‘90s years. The new “Paging Mr. Proust” sees Louris in charge again, leading a band that includes longtime members. The opening song, “Quiet Corners and Empty Spaces,” “Lovers of the Sun,” and “Leaving the Monsters Behind” show that the band’s gift for hooks remains strong. (R.E.M. guitarist Peter Buck and Tucker Martine -- who has worked with the Decemberists, Beth Orton, Spoon, and many others -- produced the album alongside Louris in Portland.)

The album includes a handful of literary references, including one to the author of "Infinite Jest": “David Foster Wallace said what goes on inside your head is just too complicated to describe.”

“Paging Mr. Proust” has fewer country and folk touches than usual and more influences from outside the roots world, including elements of Krautrock and electronica. But at an emotional level, it’s still a Jayhawks record, with the band’s mix of brightness and melancholy.

Louris spoke to Salon from his home in Minneapolis; the interview has been lightly edited for clarity.

Let’s talk about the sound of the album for a second. You produced “Paging Mr. Proust” with Peter Buck and Tucker Martine – what drew you to them and what did they bring to the album?

I’d always been an R.E.M. fan and have known them from way back. I didn’t know them personally very well, but knew them in passing: I almost sold one of my guitars to Peter back in the ‘80s when he was looking for a Rickenbacker and he came into town.

But the Jayhawks played at Peter’s Todos Santos Festival, down in Mexico, a couple years ago, and Peter made it known that he’d be available if we ever wanted a producer. Because Peter likes to work, especially now that R.E.M. is no more. He likes to keep busy, and he’s always been a fan. I’ve never met anybody who’s a bigger music lover, or who has more vinyl than he does.

Our manager discussed Tucker Martine – because Peter’s not a knob-twiddler. He’s the big-picture guy. If it was up to Peter, he would have done the record in five days. While with Tucker, it would have been a couple of months. We ended up somewhere closer to Tucker. We wanted somebody who had a studio, really knew his studio, who we really respected.

So Peter was the guy who sat back, let everything happen, and say, “Okay, I think we’re done here,” or “That’s the great take,” or “I think you’re overworking it here.” Tucker was more in the trenches, running the board. And they seemed to get on well together.

You have a great line on the album from David Foster Wallace. How long have you been reading him and what attracted you to his books?

You know what? I read a quote from him, and now I’ve gone back and have been reading “Infinite Jest.” I like the density of it, the humor of it, I like that it’s off the wall. It’s got the detail I like in a lot of writers – that’s why I like Proust, that’s why I like Updike. People who go that extra mile, or 10, to get into a subject. I like smart but kind of wiseacre writing.

You’ve name-checked Marcel Proust in your album title – is that because you’re at a point in your life where you’re looking back a lot? Or have you been into him for a long time?

I’ve read him in the past but never got that far. In the last few years I decided to take the plunge. Really from reading Updike. You realize that Proust is kind of the gold standard for writers like that. I figured I’d go to the source.

I don’t know that I see Proust as dwelling in the past as much as digging into the present. If he’s walking through a forest he sees a bird or a flower, and it’s all about being in that present moment. Yeah, there are allusions to the past – like a lot of great writers, he had brilliant insights but he didn’t necessarily apply them to his own life. He spent a lot of time miserable in his bed; he didn’t have a lot of experiences.

I like the way he talked about slowing down and being where you are; I like his concept of getting past clichés – clichés are lazy and usually inaccurate. There’s a great book my friend gave me, “How Proust Can Change Your Life.” It’s contemporary, and funny, and not very long. It talks about how you can live better, love better, be more forgiving, et cetera, by taking Proust into account.

The record wasn’t going to be called that until we were looking for art, and a friend of mine – she was traveling in Europe. And her friend thought she heard Marcel Proust being paged in the Amsterdam airport. “Paging Mr. Proust” – I love that. People are gonna mispronounce it, they’re gonna call me a pompous ass, it’s gonna be fantastic! You can’t get more pretentious than Proust – so I though, This is really setting me up for some slapback from the press. But it should be fun.

And that started us looking for photos of midcentury airports, which led to the cover. If you look at the cover, there’s a guy looking up at the camera. He symbolizes someone today saying, “Help, we’ve spun out of control.” You can’t go a day without having some kind of new upgrade, and everything on TV is about how we’re getting smarter, faster! And yet suicide rates are up 25 percent over the last 15 years. So something isn’t working. I think a lot of it is that people don’t know where they’re at – they’re so busy thinking about the next link they never are really thinking about where they’re at.

Not enough, in my opinion!

So I’m wondering who some of your models or inspirations are on guitar, and how you see the instrument fitting into your songs.

I’d say my favorite guitar player is probably Jimmy Page. He’s got the tone, he’s got the riffs, he’s got that kind of dark, ominous vibe that I like. Because when I play guitar, I change – it’s corny. But I’m kind of this badass all of a sudden. I feel like I’m 10 feet tall. I feel this part of me come out that only comes out when I play guitar – it’s a dark power, it’s not satanic, but it comes from deep down.

Early on I was enamored of Clarence White, who invented the B-Bender [which bends the guitar’s B string to give a pedal-steel-like sound] … It was for the weirdness of his playing – it was very non-rock. I haven’t been a huge Richard Thompson fan but I like his weird, weird playing on the Nick Drake records. He has these weird fills.

I love Neil Young – he’s not a flashy player, it’s more feel and tone. That’s what I’m like. I’m sure I was influenced by Pete Townshend early on. I like the guitar playing on Wire records…. And I listened to a lot of pedal steel and tried to copy things.

At the end of the day, I like some dissonance, and some kind of ominous weight.

How important is country music to your conception of the Jayhawks? Is it essential to the band, or is it something you can some in and out of?

No, it isn’t [essential]. It’s a small part of what we do. But there is a twang, so people instantly think we’re a roots band. But at the end of the day there’s probably more influence from British music and art rock, people say psychedelia even though I don’t listen to a lot of psychedelic music. My favorite record to listen to, probably, is something like “Oar” by Skip Spence – it’s just so weird.

I don’t listen to a lot of country music – I appreciate it for its soulfulness. Just like I do soul and blue and bluegrass and funk.

I guess there are elements of it in [the Jayhawks] – but not in the songwriting. Our lyrics are way too vague to be a country lyric, and the structures are certainly not country. Maybe certain elements in the instrumentation – you hear an acoustic guitar, a little twang of an electric.

You’re based in Minneapolis, I think. Did you have any contact with Prince over the years?

Not really where I talked to him or anything. But in the early ‘80s my band, Safety Last, a rockabilly band, was chosen to warm him up at First Avenue for a gigantic surprise record-release party for “Controversy.” Our bass amp blew up and our bass player had to plug into this leopard-skin bass amp of Prince’s.

I also remember getting done with the show, stepping backstage, into a covered parking garage… Prince pulled up, driving his own little yellow convertible Mustang, and he got really pissed off and drove off, kept everybody waiting for an hour and a half. Drove back, player a super late night show – a triumphant show.

You’d see him at restaurants, he came out to some shows. I saw him play a year or two ago at a small club, I was about 10 feet from him.

It’s really hit me hard. I didn’t think it would. It took a day for it to sink in. I love Bowie, and have probably listened to more Bowie. But for some reason the Prince death has hit me harder. I think it’s a combination that it was so unexpected, and he was such a presence in this town.

Your album and tour for “Mockingbird Time,” your reunion with Jayhawks founder Mark Olson, were so strong. Do you think you’ll ever play with him again?