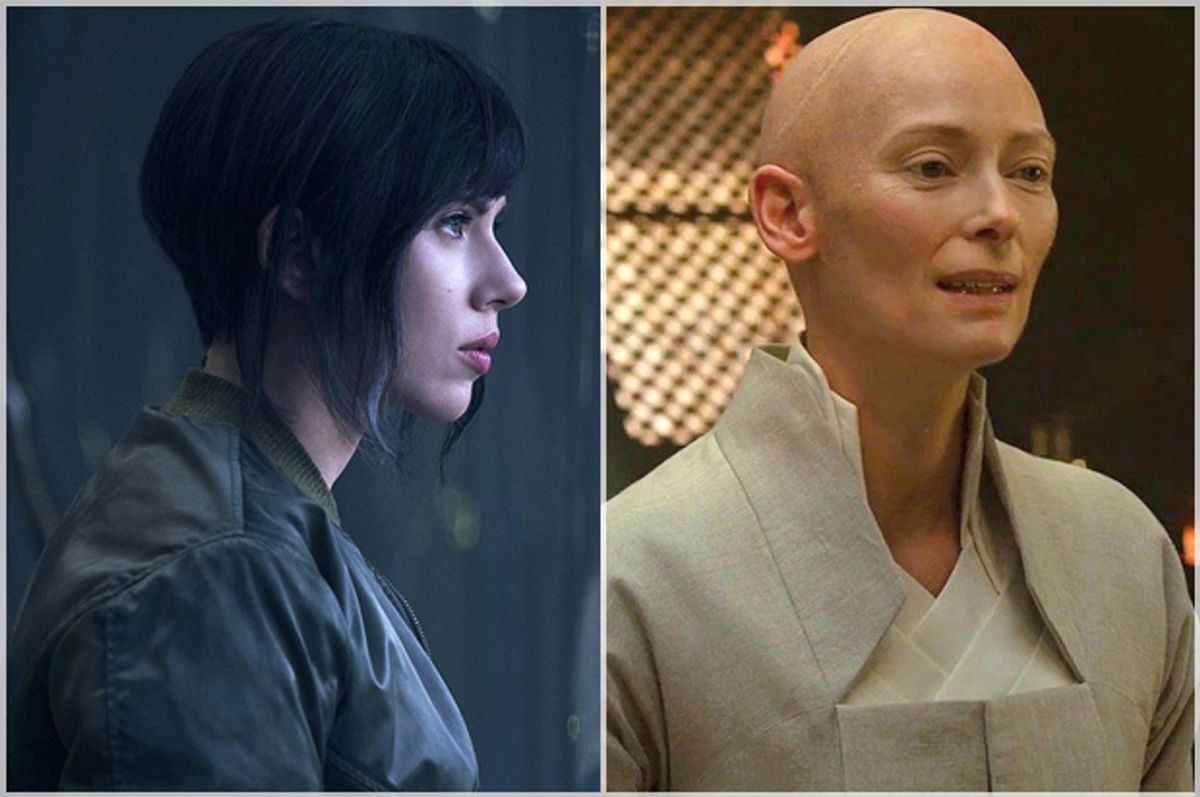 Scarlett Johansson in "Ghost in the Shell," Tilda Swinton in "Dr. Strange"
--

In case you haven’t heard, Tilda Swinton will be playing a Tibetan man known as the Ancient One in the film version of “Dr. Strange.” Scarlett Johansson is starring as Major Motoko Kusanagi, who is Japanese, in the Hollywood version of “The Ghost in the Shell.” These are just two of the most high profile and recent examples of a white actor cast as an Asian character in a blockbuster film. Even in this day and age, as Vox demonstrated in this illuminating video, Hollywood’s “best Asian roles still go to white people.” But for those still skeptical of its pernicious reach, consider the case of Rita Repulsa.

Rita Repulsa is one of the chief villains in the “Power Ranger” series. Along with the “Ghost in the Shell,” the Mighty Morphin Power Rangers are Japanese imports. They came into the world as Japanese characters played by Japanese actors on Japanese television. When the American adaptation of the series debuted in 1993, Japanese actor Machiko Soga played Rita. By 1995, Soga had been replaced: the big screen version cast Julia Cortez in the role. Fast forward to the present: the “Power Rangers” film is getting a big-budget reboot, and actor Elizabeth Banks will portray her.

Over the years, as the franchise expanded and flourished, an Asian character has been gradually whitened until Effie Trinket--herself envisioned as a geisha/Queen Amidala pastiche for the film version of the YA trilogy, “The Hunger Games”--will be playing her. There are no protests over that casting, because who remembers that Rita was originally Japanese? Nobody younger than thirty. And that’s the point.

Cultural amnesia is politically useful, because it forces the fight for representation to return to GO with every generation, draining energy and resources that could be put towards achieving structural progress instead of ad-hoc, piecemeal protests. When screenwriter Max Landis absolved Hollywood of responsibility by blaming “culture” (of which films are apparently not, to his mind, a part), he was offering a circular argument that nonetheless illuminates the Sisyphean nature of the problem.

Hollywood, the line goes, needs to appeal to film goers in Asia because it depends on foreign box office to earn back its investment. Wherefore, the studio behind “Ghost in the Shell” reportedly tested out a special effect that would make Johansson appear “more Asian” in the film, even as the chief screenwriter for “Doctor Strange” argued that China would be so offended by a Tibetan character that the studio had no choice but to cast anyone but an Asian actor in the role. Marvel responded by denying that appeasing China had anything to do with it. They just randomly decided to make the Ancient One white, female, and Celtic. Because they value “diversity.” In other words, the Ancient One got the Rita Repulsa treatment.

Asian America called bullshit. “So let me get this straight,” George Takei posted to his millions of followers on Facebook. “You cast a white actress so you wouldn’t hurt sales…in Asia? This backpedaling is nearly as cringeworthy as the casting. Marvel must think we’re all idiots.” Actors Constance Wu and Ming-Na Wen have not minced words regarding their anger, their reasonable rage itself a challenge to stereotypes of Asian female docility. And the hashtag #MyYellowfaceStory has given theater actors a forum where they can speak out against whitewashing (and the related practice, called Yellowface) on Broadway.

These voices have now joined together under the hashtag #WhiteWashedOUT. Coordinated by Keith Chow, Ellen Oh, and Grace Hwang Lynch under the umbrella of the website Nerds of Color, the hashtag has the support of outspoken public figures such as Margaret Cho and columnist Shaun King.

The tweets range from personal statements regarding systemic racism in Hollywood, to professional fears that one might be  shut out of creative opportunities for the simple fact of being Asian.

For detractors, it may be easy to wave off #WhitewashedOUT as so much whinging over comic-book characters that no mature adult ought to care about. To this criticism, Ellen Oh has a simple rejoinder:

But nearly every tweet reflects a complex grappling with one's own colonized imagination, where whiteness — as a construct, a power, a way of framing the world — is the filter through which American "culture" sees the world. And Asian Americans, being Americans and people too, are tasked with the job of resetting the frame, while re-visioning themselves. To accomplish lasting  change, heroic measures may be called for.  And, in real life, sometimes heroes are Asian American.